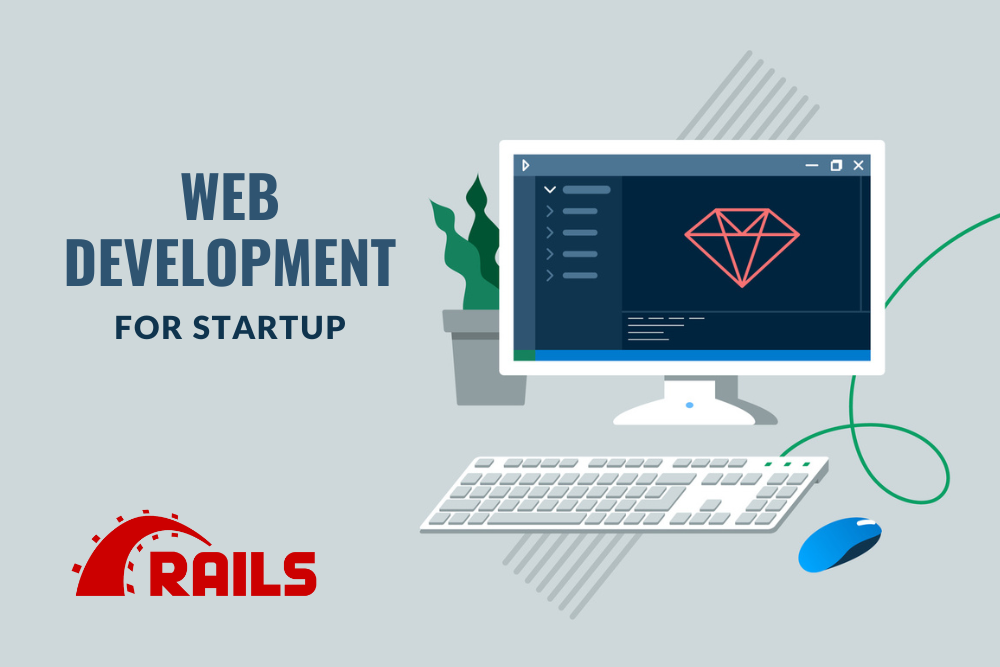 What is Ruby on Rails?

Ruby on Rails is, as we’ve mentioned, a backend framework for web application development. It is based on Ruby, a programming language created in the ‘90s, and the thing that makes it special is that it is focused on making life and work simpler for developers. But how is the creation process simplified with Ruby on Rails?

Ruby on Rails provides a structure to build your web app plus a wide range of tools that can handle tasks for you.

Going into deeper details, we can state that Ruby on Rails provides a three-layer structure for your projects:

If, for example, you’re developing an interactive restaurant menu, your Ruby on Rails structure will look like this:

Model: at this level, you define every meal available in the restaurant.
View: here you specify each screen of the app, and what happens after each interaction.
Controller: This part manages the input so, for example, decides what happens when the users run a search query.

Ruby on Rails and Startups

Before moving on to discussing the benefits of Ruby on Rails, let’s analyze first the strong connection that Rails is known to have with Startups.

Ruby on Rails is considered “startup-friendly” because, other than being open source and, therefore, free to use, it is also very flexible. Furthermore, of course, all the benefits we’re about to discuss in the next paragraph are even more advantageous for startups.

What are the Benefits of using Ruby on Rails for Startup?

As we’ve mentioned, Ruby on Rails is open-source and you can freely use the framework for your projects; however, cost-effectiveness doesn’t only come from the fact that it’s open-source.

While being fee-effective, Ruby on Rails doesn’t compromise with a lack of efficiency or flexibility. Ruby on Rails is a powerful tool that is also open-source.

Ruby on Rails provides a structure, a range of standardized programming conventions that not only ease the work of the developer that works alone but even more importantly, ease the work of a developing team: every member will share the same convention, avoiding misunderstandings and errors.

Other than making things efficient for developers, Ruby on Rails is also deeply focused on security. Some protection is provided by default, but Ruby on Rails can also count on a wide network of developers constantly keeping Rails updated and providing security plugins and applications.

Because of its flexibility, Ruby on Rails also guarantees flexibility for your projects. What does it mean? As we’ve mentioned, Rails is suitable for the simplest and most complex development projects. It means that if you want to start little and then grow with time and as your resources increase, Ruby on Rails can always be your backend framework. You won’t need to migrate to another one as the complexity of your web application or startup business grows.

Because Ruby on Rails is so widely used and so popular among developers all around the world, you can always count on a wide community for support. When you start a project with Ruby on Rails, you can count on thousands of tutorials to learn any aspect of it. If you’re completely new to web app development, you can even teach yourself how to use Ruby on Rails thanks to the huge quantity of free content you can find online. Furthermore, tons of forums are there to answer any specific question and to help go through any specific issue.

Ruby on Rails is known to be flexible and therefore fast. As you know speed is fundamental in the always-developing world of web applications and Rails is a warranty under this point of view.

Should you Use Ruby on Rails for your Projects?

If you’re launching your startup and you need a web application then Ruby on Rails is one of the best options for you. There are many alternatives, but in most cases, Ruby on Rails still remains the best for the reasons we’ve listed above.

Is there any case where Rails is not recommended? Well, experts say that if you are a complete beginner, you shouldn’t dive straight into learning Ruby on Rails: it’s better to learn some JavaScript at least first and then move on to Ruby on Rails. Other than that, there is no reason not to opt for Ruby on Rails.

However, if you, for any reason, want to evaluate an alternative, experts recommended ReactJS as the only valid alternative to Ruby on Rails. But, keep in mind that if you go on that path, you couldn’t be counting on the wide support community that comes with Ruby on Rails.