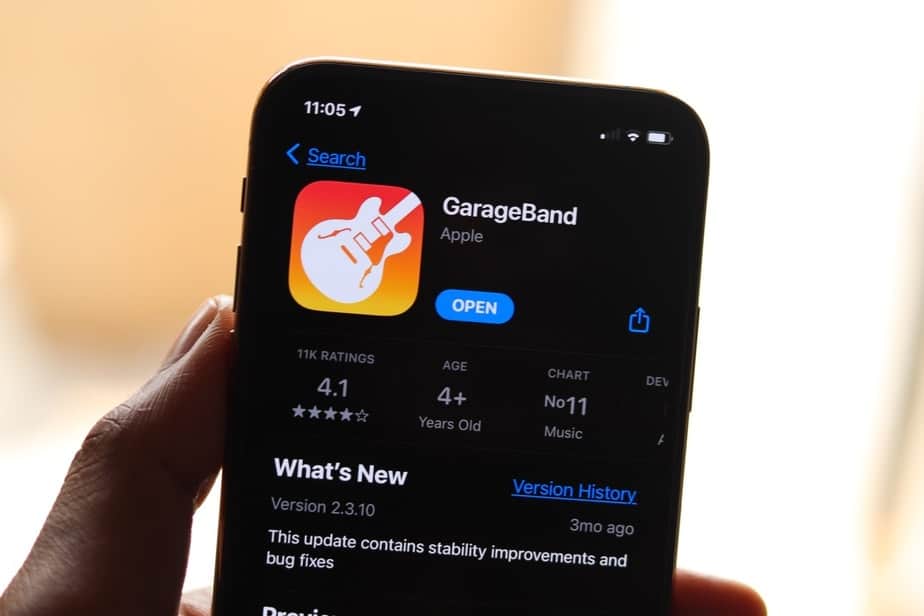 Today’s era is considered the golden era of the music industry due to the availability of the latest technology and equipment. Back in the 60s, many famous singers had to record their songs in one take without any mistake. Most recording studios at that time had an old musical setup like a twin-track vacuum-tube machine. So, there was no chance of retaking, redubbing, and the addition of external voices as we hear in today’s rap music. In all these circumstances musicians and singers had left with very little room for creativity. Any mistake during recording led to wastage of money and time.

With the advent of technology, the music industry also grew and the latest equipment develops over time. When talking about advancement in the music industry, no one can forget to mention the GarageBand app. GarageBand is a pocket-size digital PlayStation that assists musicians in the composition of professional audio tracks and podcasts. Being the pioneer of music apps, GarageBand offers a vast library of musical instruments like guitar, drum, and many more. With create, record, and edit options, musicians can get studio-quality output simply from their mobile phones. 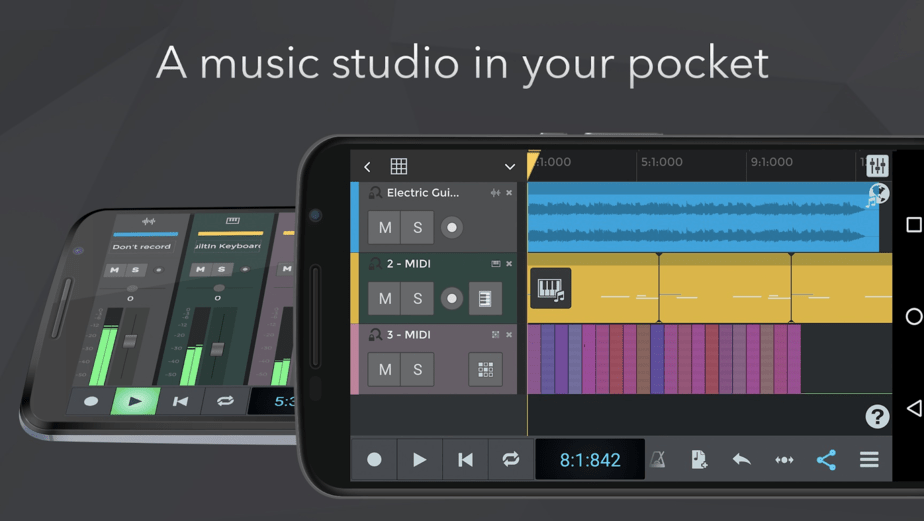 n-Track Studio is one of the best GarageBand alternatives for Android you can find on the internet. With all the essential features of the recording studio, this app enables your smartphone to record both audio and MIDI tracks. A wide range of audio effects can be used during playback editing that gives a professional touch to your recording. Being a professional recording studio app, n-Track Studio supports mono and stereo recording. In the free version, users can get 11 tracks and after an in-app purchase, users can access unlimited tracks for their recordings. This app also has a built-in MIDI synth feature with a vast library of 128 general MIDI instrumental sounds. For editing and support of MIDI synth, other tools such as MIDI editor, Step sequencer, Spectrum analyzer, etc are added.

The audio effects library of this app contains different audio effects like Chorus, Reverb, Flanger, Echo, Tremolo, and many more. Another feature you may not found in any other GarageBand alternatives for Android is the configuration of this app with a 64-bit Double precision floating point audio engine. This app enables users to import and export audio files in 16, 24, and 32-bit formats. With the “Sharing feature”, you can share your piece of work with your friends and other musicians on social media. For beginners, this app also has a tutorial webpage where users can find help and guidance. Overall, n-Track Studio is the best app like GarageBand for Android devices, which allows users to get studio-quality output. 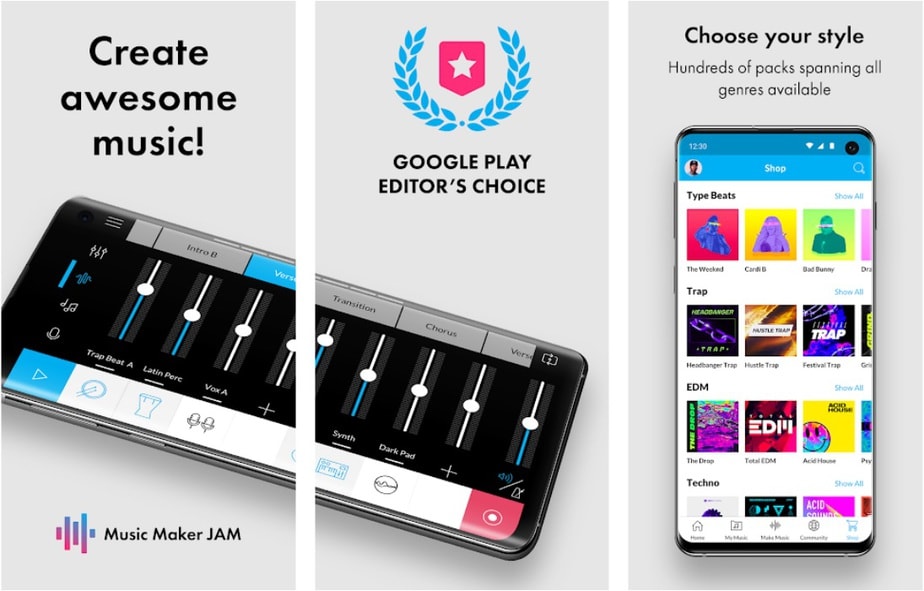 Music Maker JAM is another app like GarageBand for Android users that contain all the necessary features of a recording studio. This app is equally suitable for both beginners and professional musicians. This app offers 100+ music styles, 350 mix packs, and an additional 8 channel mixer which allows musicians to create music of their taste. Another feature available in Music Maker JAM is “Loop mixer” along with the library of 550,000+ loops. The loops are short music pieces that comprise vocals, beats, synth leads, and baselines. Musicians can select loops from this library and can arrange or adjust their repetition in the music audio.

Another feature of this app is that the user can record any external sound or singing in his voice. After recording, the user can edit this recording by adding audio effects or audio style and add this recording in an audio file. This feature is very useful for those who manage the recording of rapping, singing, or other musical sounds. By using the “sharing feature”, users can share composed audio files on social media platforms like Facebook, YouTube, SoundCloud, Tik Tok, and many others. 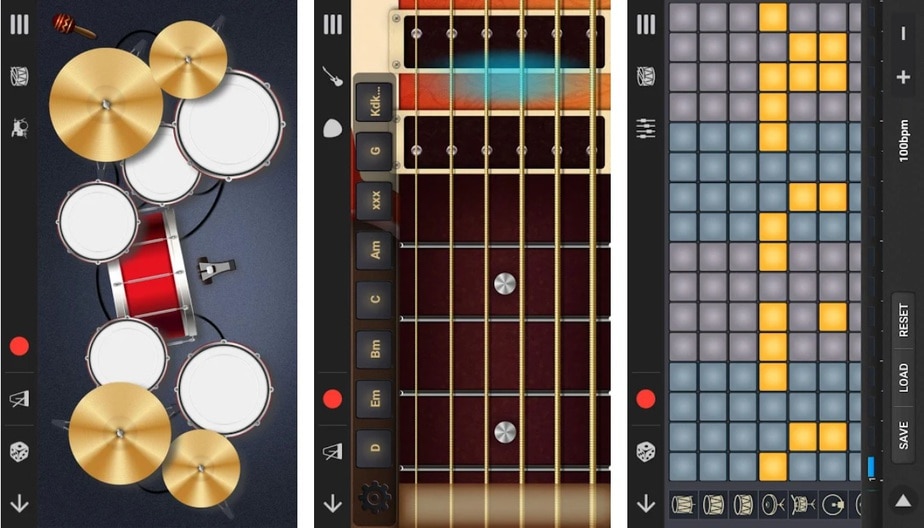 With a multitrack synthesizer, users can use this app on an Android phone for recording voice tracks or audio files in MIDI format. MIDI peripheral keyboard can also connect with a phone containing the Walk Band app via USB cable. After recording, the recorded file can be edited, converted into an mp3 file, or mixed with any track by using a multitrack synthesizer. After composition, the user can share this composed piece of music on SoundCloud and many other social media platforms. 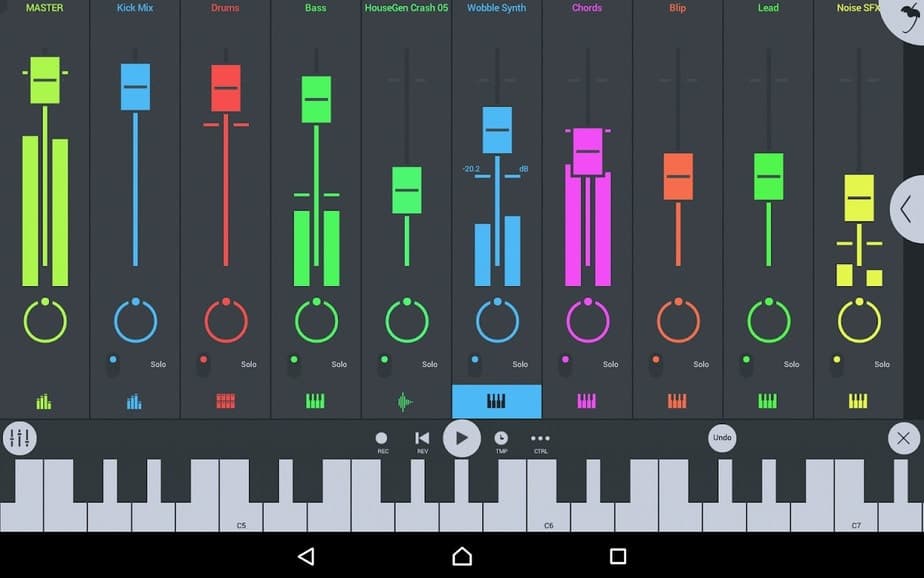 If you are a professional musician who has to handle multi-track projects, FL Studio Mobile will be the best GarageBand alternative for Android. The PC version of FL Studio is also available and users can access high-quality features there. To unlock the full-scale recording studio features of this app, the user will be charged $15 on monthly basis. The instrument library of the FL Studio app contains 133 instruments which are more than any GarageBand alternative for Android in the market. All of these instruments are available in loops and their settings can be customized. FL Studio also has unlimited audio effects along with 99 track sequences that users can edit or arrange during composition.

The “undo” and “redo” features can be used unlimited times and helps users to develop a high-quality piece of music. FL Studio has a user-friendly audio engine with very low battery consumption. The music latency of this app hugely depends upon the processor power of the smartphone. Another feature that is not present in many GarageBand alternatives for Android is the cloud storage of music files. FL Studio can store music files in cloud storage services such as Dropbox. Users can easily share these files either via email, Dropbox, or any other means. On account of all the features this app offers, FL Studio is the best app for Android as well as PC use. 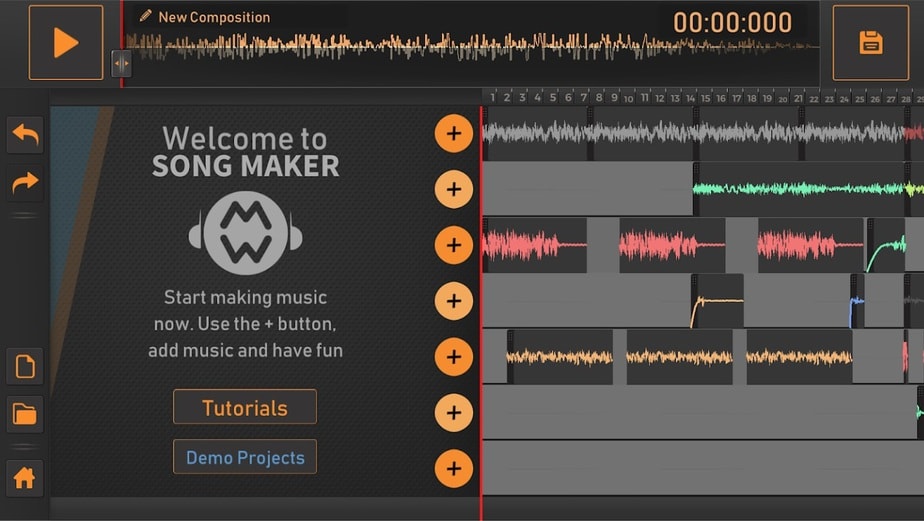 Song Maker app is similar to GarageBand for Android, which is very popular among HipHop, EDM, and Pop-music lovers. This app library has thousands of music loops, beats, tunes, rhythms, and many other pieces of sound. Users can create complete music tracks by selecting and arrangement of these pre-recorded music pieces. For this purpose, a live music editing tool is provided which helps you creating studio-quality output.

The music library of this app comprises different kinds of music such as Metal, Bass, DJ Beats, Drum, HipHop, and many more. To develop raw music, external voice recording is enabled, and you can record your voice too. The live music editing and mixing tool will help you in editing and adding this recording to the track. Overall, this app is more about creating music by editing pre-recorded music rather than raw music. If you have skills in music editing and mixing, this GarageBand Alternative for Android is the best place to show your skills. 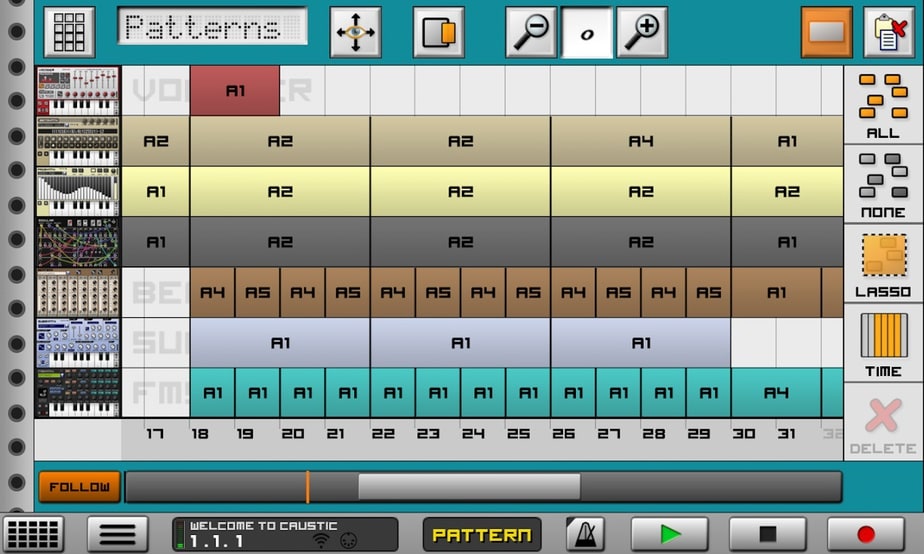 Caustic 3 is an Android app like GarageBand for professional users as it enables the creation of real-time music. The developer of Caustic develops it after getting inspiration from rack mount samplers and synthesizers. This app allows the selection of up to 14 virtual machines along with their virtual pads. Users can arrange them in the rack and change their position up and down from the side control bar. The machines you can arrange in the rack include BeatBox, Organ, Vocoder, Bassline, PCM synth, SUB synth, SAW synth, KSS synth, FMS synth, Pad synth, 8Bit synth, and 8 Modular respectively. Each machine has its virtual pad or keyboard which allows musicians to create studio-quality music.

The presence of these 14 virtual machines allows professionals to create thousands of music loops, beats, and tones. For editing of the song, Parametric Equalizer tool is provided, while for modification and arranging of song, Sequencers are present. The free version of this GarageBand alternative is easily downloadable from the Google Play Store. But many features and services are locked in the free account such as Storage and Export feature is disabled in the free account. By making an in-app purchase, the user can get a key to unlock the full version of Caustic. Overall, for musicians who are working on the professional level, this app is heaven for them to create electronic music.