It used to be quite awkward for shy people to meet others. You could be interested in someone but have no common ground. You could see someone attractive somewhere, but you’re too shy to talk. Or maybe you could just be lonely and need someone to talk to but find it hard to approach. Thanks to the internet, things have gotten a lot easier, thanks to meetup apps like MeetMe. But MeetMe is not alone, so our topic this time is the 10 best apps similar to MeetMe for Android and iOS.

Isn’t MeetMe enough? Then why discuss other apps? MeetMe is very similar to Tinder, an app that allows strangers to meet strangers and then facilitates meetups once things become comfortable. The usage is almost the same, where users can view other profiles and decide who they like, much like Tinder. It also facilitates chats when either side is ready to talk. So yes, MeetMe is like Tinder with the interface shuffled around but also includes video streams by users who want to promote themselves.

You may also like: 7 Best Free Dating Apps without Payment

While MeetMe is good enough for its users, meetup apps have different approaches, and MeetMe might not be the best match for you. So, let’s look for an app like MeetMe but better, in case you want more features or an app that’s more subtle. We’ll discuss other options in order to improve your social life, spice it up or just shake things up a bit. So, without further ado, here are the 10 best apps similar to MeetMe for Android and iOS. 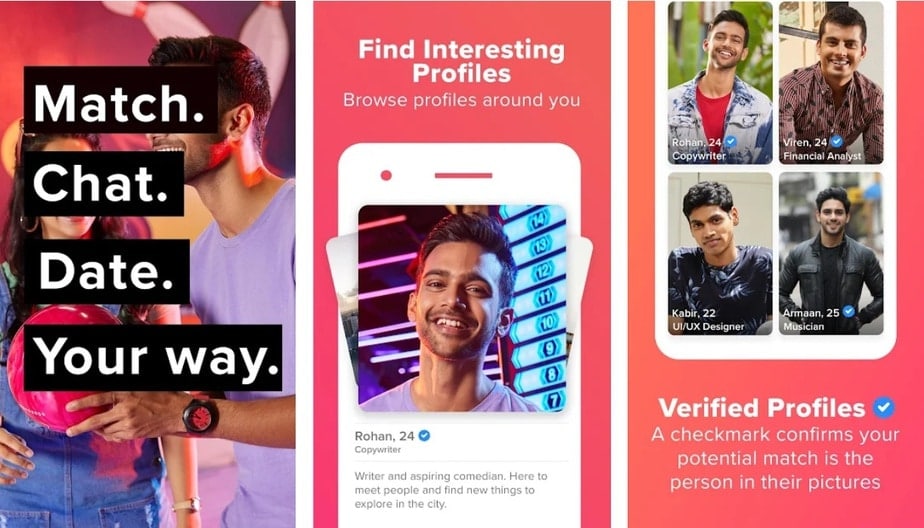 Let’s first talk about the elephant in the room, Tinder. It’s one of the first apps of this nature and has been quite publicized, and perhaps has the most users at over 100 million installs. Tinder is quite easy to use as well. It’s free to download, and its in-app purchases allow users to unlock super-likes for those very attractive matches, among other features and remove ads.

Tinder pioneered the person swipe shop concept now used in other chat/dating apps. Something Facebook’s Mark Zuckerberg could have capitalized on with an older app of his in college. Matching with Tinder is based on how expansive the user’s chosen geographic range, the other person’s appearance, and their short bios. 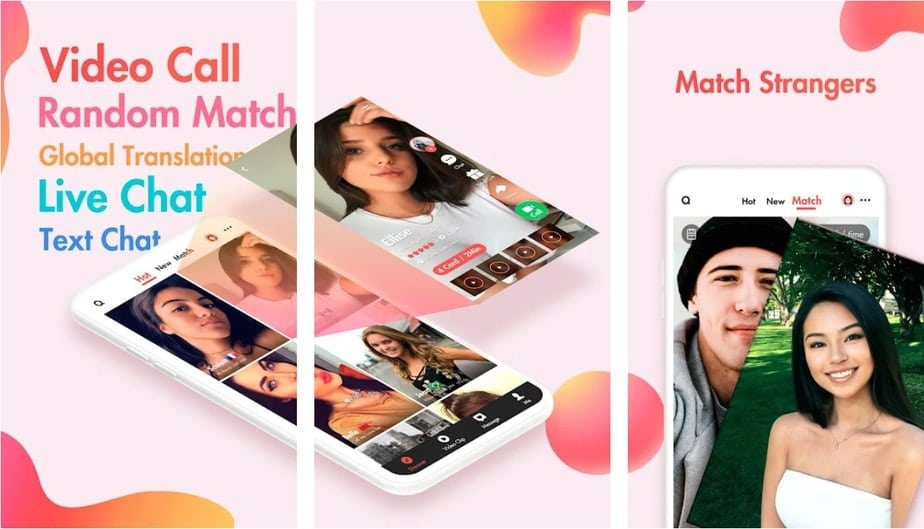 Despite the name, MeowChat isn’t just for cats or cat persons. Meowchat has been around since 2013, connecting strangers locally and regionally, and has had over a million downloads. Meowchat is free to download but allows in-app purchases to add other features or disable annoying ads. The Meowchat interface is cute and is generally easy to use.

As mentioned, MeowChat can connect strangers from a small area and even globally and matches its users based on common interests. It allows instant chats between users and even voice and video chats. Unlike MeetMe, MeowChat wants more info for profile completion. And for these sorts of apps, profile completion is important to generate more and proper matches, and with that, Meowchat guarantees the safety of its users. But at the end of the day, it would always be up to the users how much they want to divulge, stuff that will come up anyway when chats get intimate. 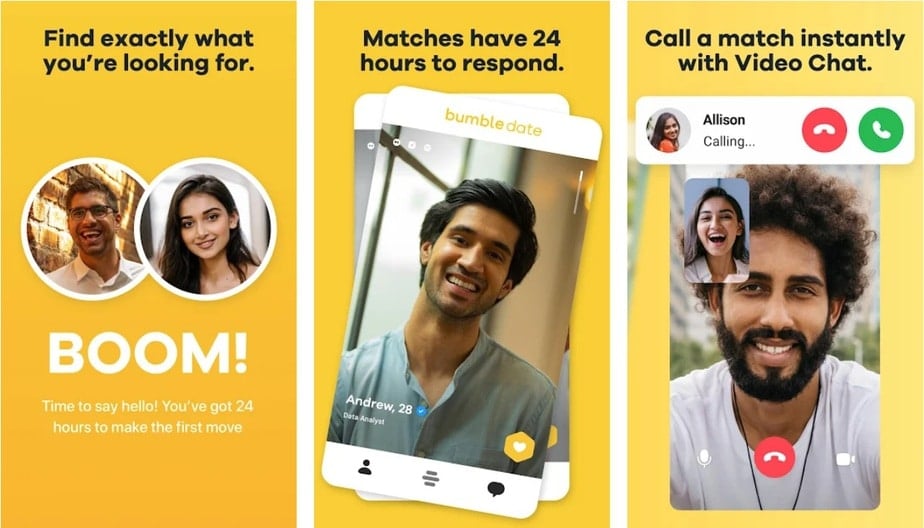 Bumble requires men to be real gentlemen. This means that for guys, the girls should make the first move or the first to say hi. That’s what sets this app similar to MeetMe apart from the rest. And that stays true to its bee-related theme, aside from its color scheme. It’s not a big deal as many guys are also anxious to be the first to say hi. Another unique feature on Bumble is that matches will expire in 24 hours unless the girl, of course, makes the first move. Other Bumble features include unlimited swipes, unlimited text chats, integration with Spotify and Instagram, and video chats. And in keeping with its bee theme, busy bees can also connect professionally, which makes Bumble the LinkedIn of the dating app world. 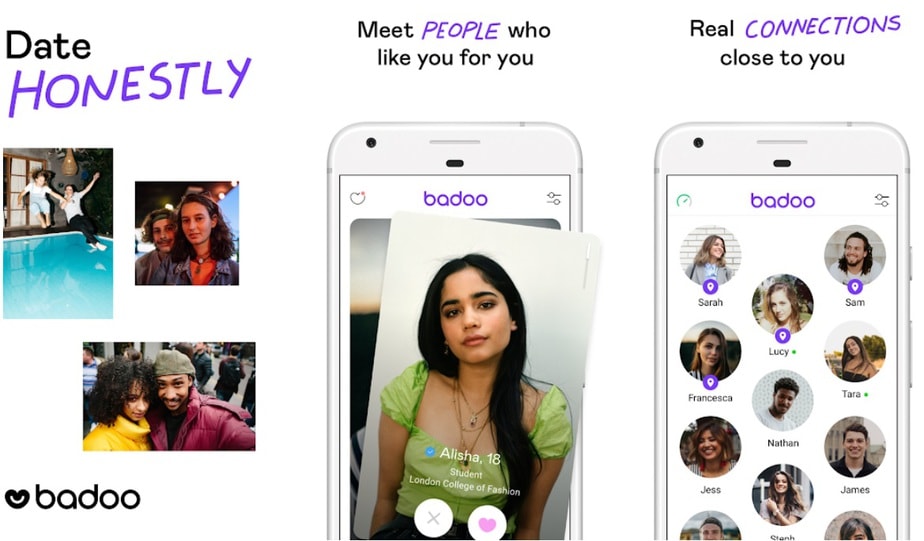 Honesty is the best policy when it comes to dating, mostly, but with Badoo, that is kind of their slogan. And that apparently is working for Badoo. As for an app similar to MeetMe, it has over 100 million installs and about five million positive reviews. That is, despite the sporadic amount of ads that appear during the use of the free version. As a chat/dating app, it delivers with an easy interface.

Badoo’s features include anytime/anywhere video chat, swipe shopping, verified profiles, video clip uploads, automatic blurring of explicit photos, and honest matchups depending on intentions. The latter two features might be a turnoff for some, but it does highlight Badoo’s mantra of sincerity and respect. So whether users are just out to make friends or are on the prowl for hookups, it will match them with like minds. 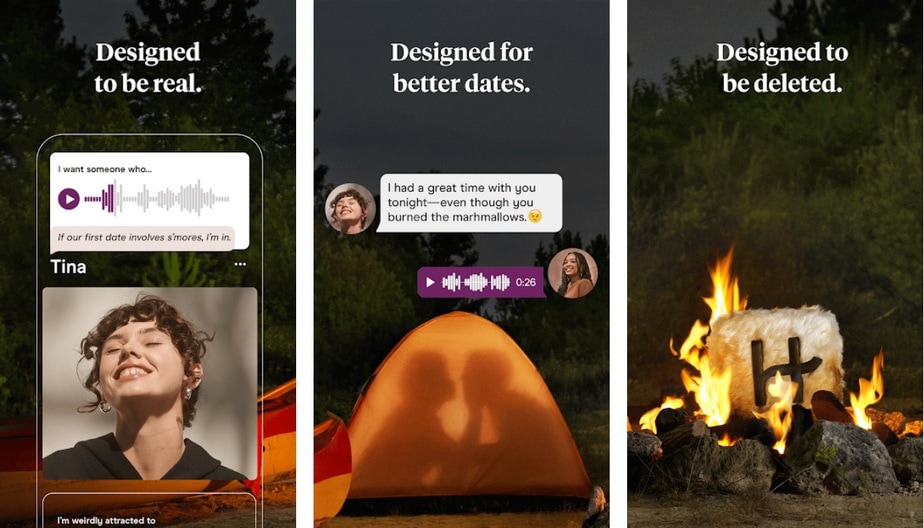 The app was designed to be deleted because it either works or something better. But as they say in their commercials, they’re confident that it works and will connect two strangers into becoming partners for the long term. So unlike Tinder or other of the entries here, Hinge is designed for long-term relationships and not just hookups and flings. Also, unlike the other entries here, Hinge does not have swipe shopping. Like Badoo, Hinge hinges on honesty.

Creating a complete, honest profile is important as Hinge will match people and encourage them as much as possible to meet in person. Users are requested to add conversation starters or icebreakers on their profiles so that interested people may respond to them as part of the bio.

Another good Hinge feature is that users don’t have to pay Hinge to see who likes them. It’s completely free, which pushes people to connect even easier. However, Hinge will ask for plenty of personal information to keep things honest. So persons who have an air of mystery about them might not like this app. 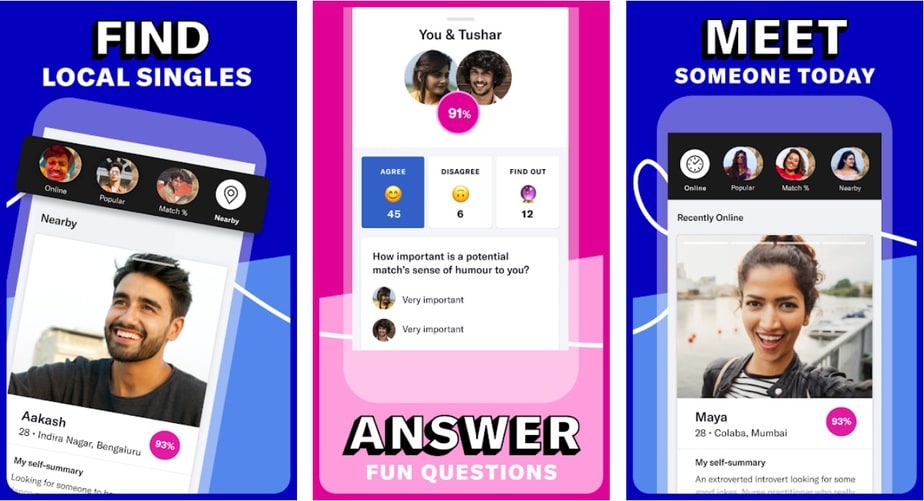 With over 30 million members, OkCupid is a very popular chat/dating app similar to MeetMe. If you’re looking for a totally inclusive chat/dating app that lets users choose from up to 60 different gender identities, set pronouns, set unique question prompts, and dealbreakers to weed out the crazy ones, then OkCupid is the one for you.

Like many of the entries here, OkCupid is quite intuitive and easy to use. Plus, the swipe-shop allows the addition of plenty of info on the bio, so users can know more about their potential match on the get-go. Most of the app functions are free, such as seeing people who liked you, etc. However, dealbreakers have their uses and can be unlocked upon purchase. OkCupid reviews are overall quite good, and it is worth a try. 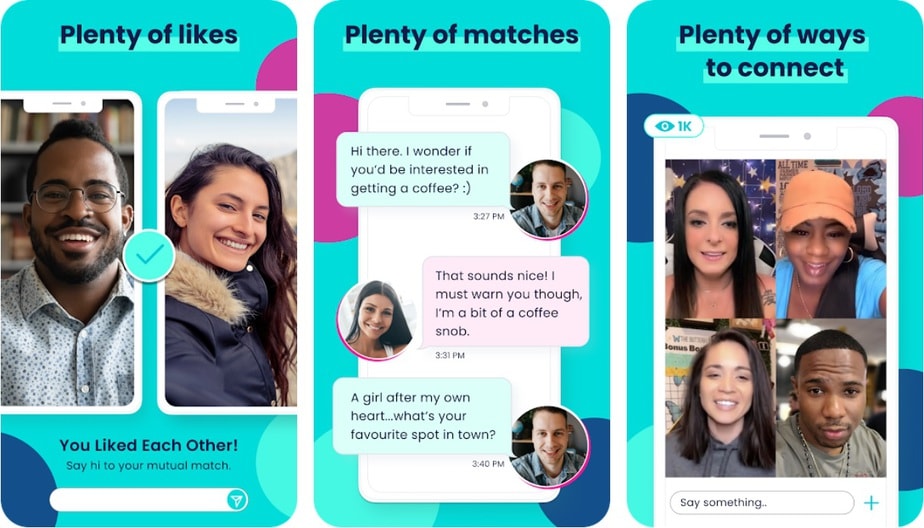 Plenty of Fish is a wordplay on the expression that ‘there’s plenty of fish in the sea.’ This means that there are plenty of choices out there, so lonely folks need not be discouraged. If you’re feeling depressed and lonely, just think of Stuart’s happy ending in The Big Bang Theory and try out this app similar to MeetMe.

While it took on an odd name, this is one of the most popular dating apps out there at over 50 million installs. However, reviews aren’t exactly positive recently. The downloads speak for itself as it must have worked well for a time. The current UI may be a factor as it just isn’t pretty compared to the others. The company behind the app has been around since 2003, so old values and design choices still linger. POF has the obligatory swipe shop, live chats, and video chats are also available. It’s also area and interest-based when creating matches. Plenty of Fish is worth a try given their userbase is over 50 to 100 million fish. 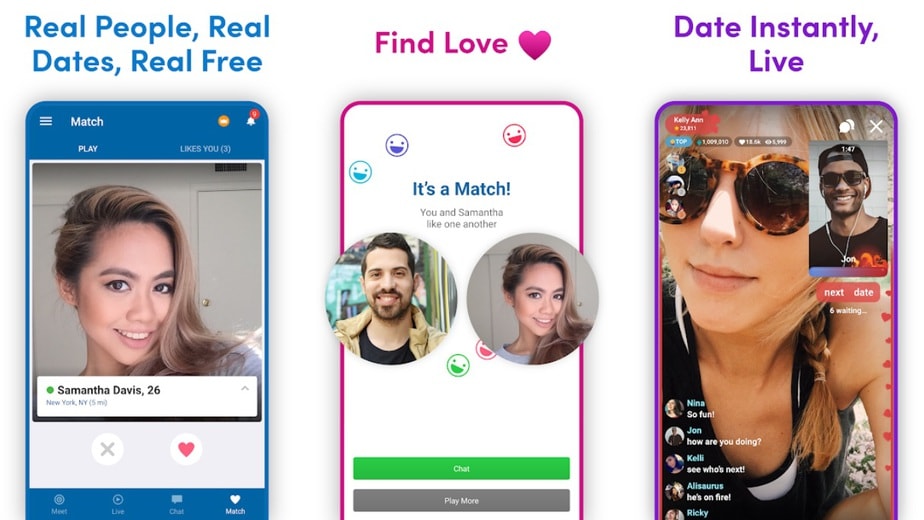 Skout is definitely a better name for a chat/dating app similar to MeetMe. Like Plenty of Fish, it’s a very popular app with over 50 million downloads and over 10 million active users. Just how many lonely souls are out there wanting to hook up online? The company behind Skout has been around since 2007, so it definitely had a large user base by the time apps came along.

Unlike the other apps listed here, Skout allows teens to sign up and meet potential friends. While teens and adults are separated by function, this still opens up potential holes for predatory behavior, especially since Skout does not require complete profiles. Although identities are confirmed, unclear profile photographs are permitted.

One fun aspect about Skout is that it uses an in-app currency earned by doing specific tasks and can be used for various purposes, perhaps to appeal to its younger demographic. The interface is clean, but navigation could be an issue due to its many functions. Skout is free to use and download but has in-app purchases to open up certain perks and features, including buying the app’s in-app currency. 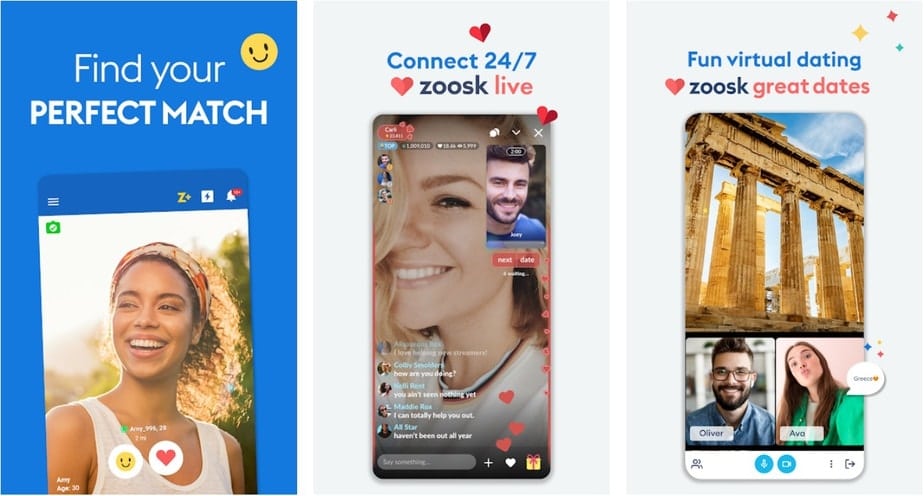 Zoosk is another popular app like MeetMe that brings strangers together but differentiates itself by its self-styled matchmaking and advanced filtering capabilities. Zoosk has been around for a while and has over 10 million members. Like Skout, Zoosk also uses an in-app currency, which can be an advantage or a let-down for those with experience with freemium mobile games.

Zoosk has a very easy-to-use and clean interface which should make first-time dating app users feel much at home. As mentioned, its best feature is its advanced matchmaking and filtering, which produces satisfactory results, so there’s less swiping in its swipe shop. It allows users to answer ‘maybe’ so they can come back later for a second look. They will ask for plenty of personal information though for this to be effective. 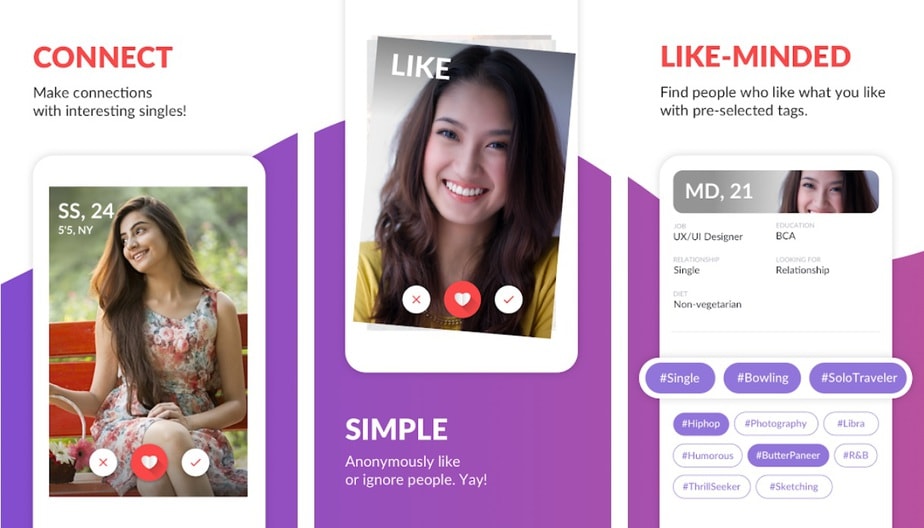 And lastly, we have Woo – the dating website women love. At over 10 million downloads and mostly positive reviews, this qualifies as one of the best dating apps out there that are similar to MeetMe. Like Bumble, Woo also puts women first and has the functions and features which does just that. Key features include allowing women to call their matches in private which hides their number, and personal information (name, number, location) are also withheld until the women are ready. These features however can put a damper on interested parties. Matchmaking is also facilitated through interest tags and question prompts.

So those are 10 dating apps that are similar to MeetMe. Be aware though that not all may be available in your country or territory, and their user base might not be in your neck of the woods as well. But feel free to try these or any app like MeetMe if you’re feeling a little lonely or want to find your soulmate.