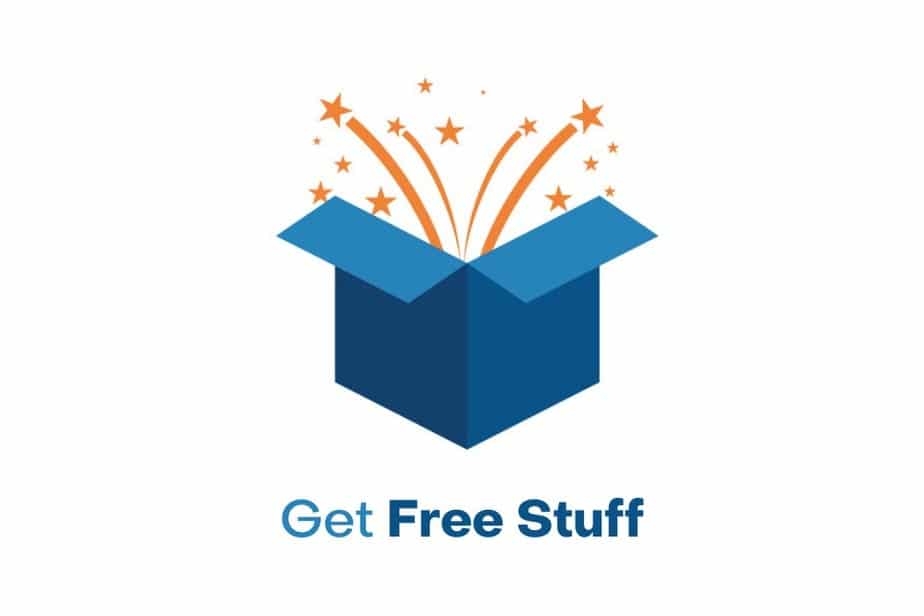 Not everything is for free! But then maybe you haven’t surfed the internet hard enough. Sure, there are free games, free content on YouTube, and even free apps. Though sometimes there are trade-offs, it’s really a matter of what gets exchanged later on. But when we say free, it’s okay as long as the goods given are not exchanged for money. And on the internet, there are plenty of sites willing to give out goods without asking for money in return. So this time, we’ll discuss how to get them through the best apps that give you free stuff.

10 Best Apps that Give You Free Stuff 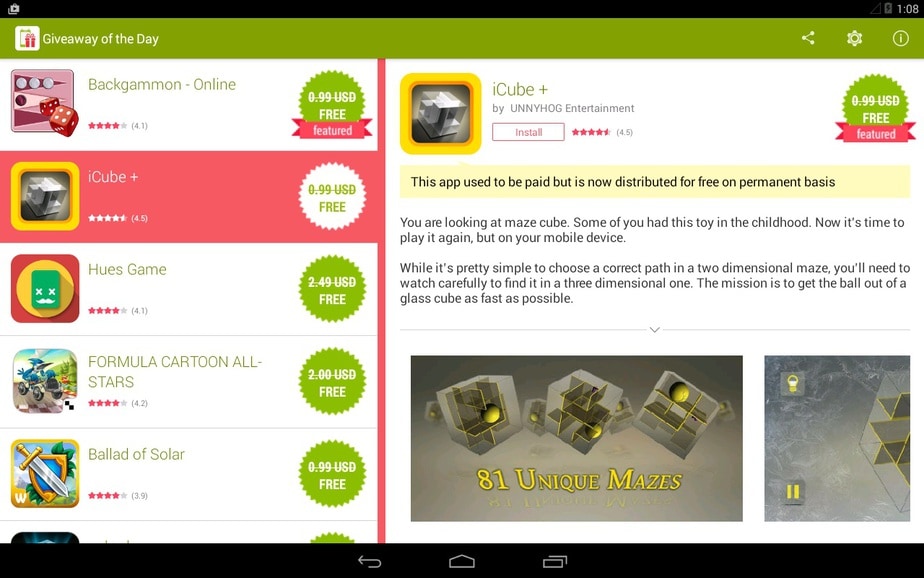 GiveawayoftheDay is an Android app that gives you free apps every day. There are plenty of free apps on the Google Play Store, so what’s new? Well, most of those free apps are riddled with annoying ads and reminders that render their usability moot.

GiveawayoftheDay provides special offers on apps that users would otherwise have to pay for. These apps would be devoid of nags and ads and would be full-featured. The apps would include all genres such as games, productivity, and multi-media. Install Giveawayoftheday now and chance upon a great app you can keep on your phone.

For other platforms, you can visit the parent site Giveaway of the Day. The apps would remain free as long as the PC or phone they’re installed on is not reformatted. In terms of free apps, Giveawayofthe day is one of the best apps that give you free stuff. 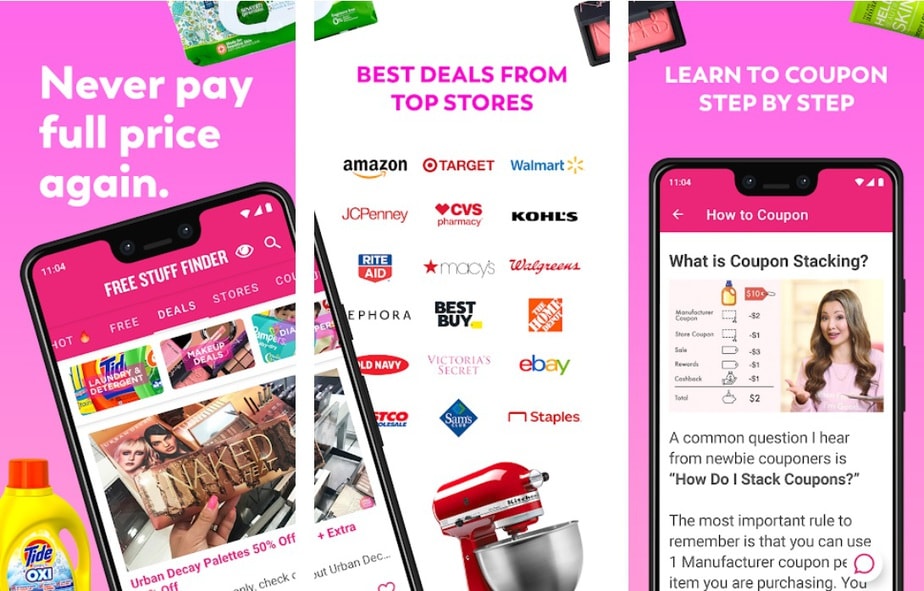 Free Stuff Finder is the brainchild of a hardworking wife and mother who wants other people to be able to save on daily expenses. Coupons, for example, are printed every day and would be a waste of paper if not taken advantage of. The app displays many printable coupons that provide free goods and large discounts for popular brands, including high-end. Couponing is nothing to be ashamed of as the app will teach cost-saving mothers, especially in today’s harsh economy.

The app is simple and easy to use, despite looking very busy promoting various stuff from sponsors. It’s quite like an average shopping app. It’s also quite informative with tips, articles, and videos on cost-saving and taking advantage of deals. Be one of the millions who have acquired at least one free product or service with Free Stuff Finder. 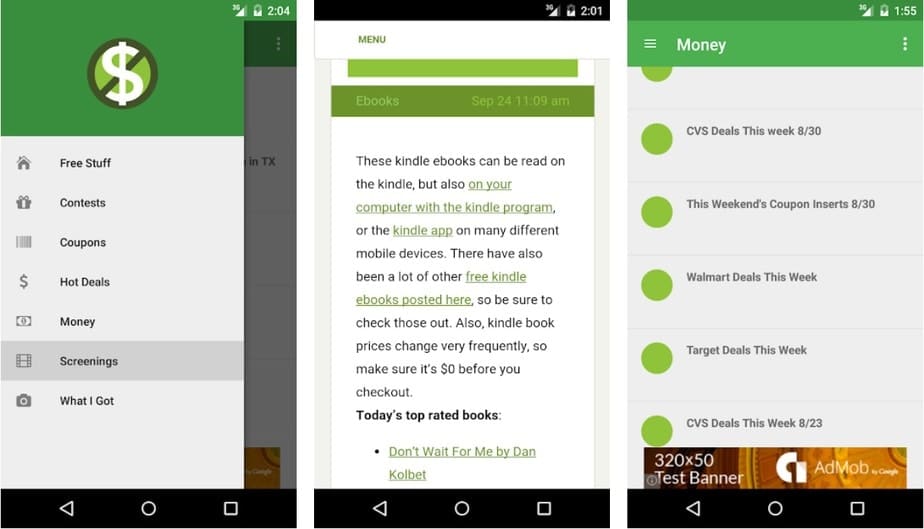 FreeStuffTimes for Android is like those magazine or newspaper shopping pages providing free coupons and ads for big discounts. The app is quite legit, with more than half a million installs. The app is completely free and subsists on ads that are not too intrusive. The app itself looks clean, simple, and easy to use, with several tabs containing links to free stuff coupons, hot deals, contests to win free stuff, and free screenings of films in your area. 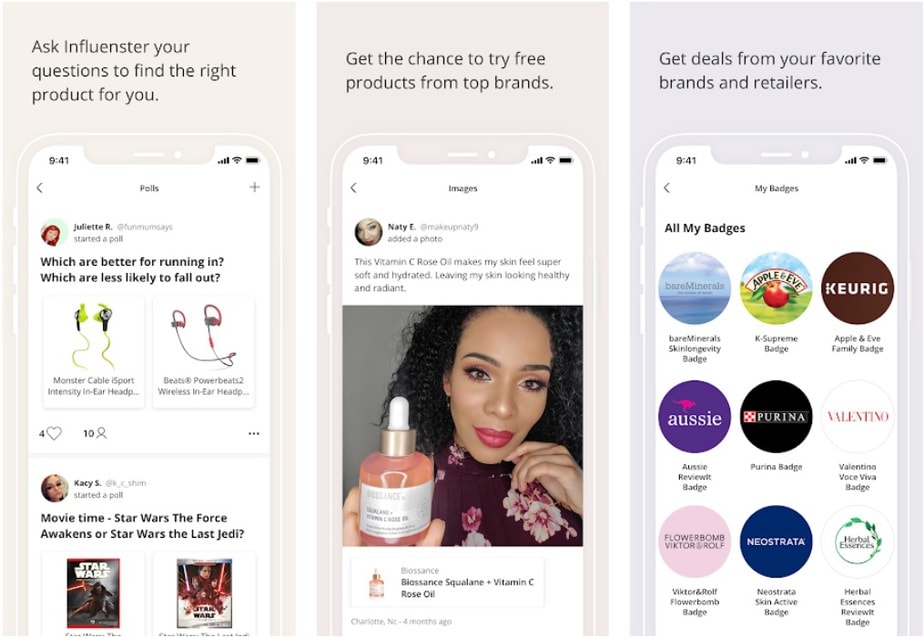 Many social media influencers gain substantive income by promoting various products mostly food and fashion. And sometimes they get free complimentary products from promoters as samples, which technically makes YouTube, Instagram, and Tiktok apps get free stuff as well. But not everyone becomes as lucky as they are. So that’s where Influenster comes in.

Influenster is a product discovery and review platform, but unlike the other apps here, an influencer may have to put in a bit of work before actually getting recognized for free stuff in the form of Voxboxes containing various goods. Members will become eligible to unlock the ability to try out products from top brands for products like candy, pet food, beauty, and skincare. They can also get high discounts and win products through contests.

The work involved will be to share reviews about various products you’ve tried or want your followers to try and join in friendly discussions about the same products. Influenster also gives up-to-date information on the top trends as well as reviews from the community. You can also learn more info about a variety of products through shared articles. The app looks simple and clean and feels like an online magazine. With over 1 million installs, it counts as a popular influencer tool and one of the best apps that give you free stuff. 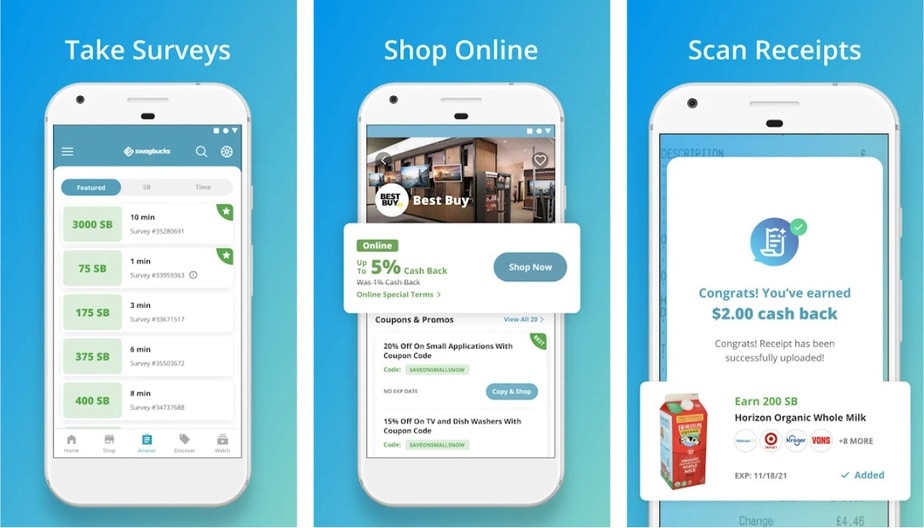 People often try their damnedest to ignore the occasional survey for the simple facts that they’re not interested in, nor do they have the time. But interest peaks when there’s an incentive, and so does time. If taking time to answer surveys actually results in getting free goods, why not? It’s perfectly possible through Swagbucks. Doing so is actually a form of online work for people who want to earn a bit extra but not earn actual cash.

Swagbucks gives back to its users through gift cards, cashback vouchers, and cash. Users can complete surveys, watch videos, and even play games and earn Swagpoints which can be redeemed for gift cards from Walmart, Amazon, and Paypal. Swagbucks has redeemed over half a billion dollars and has over 5 million users. The app itself is clean-looking and intuitive to use. If you have extra time, put in a little mindless work for free stuff. 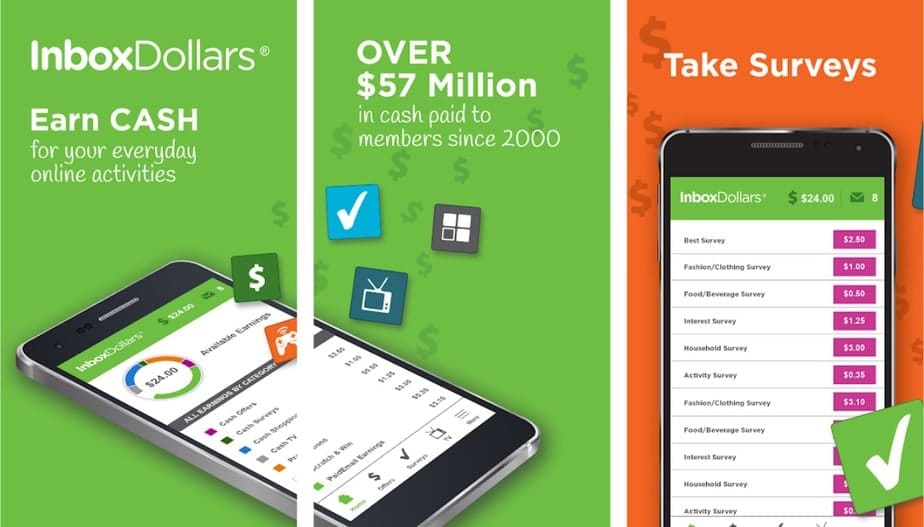 InboxDollars is an app/website similar to Swagbucks where users get paid for taking surveys, completing offers, shopping online, reading emails, and playing games. It sounds dubious, but this site has been around since the year 2000, with over 57 million cash given away. Users must accumulate $30 in their account before being able to redeem it. Playing games and taking surveys seem like the safest bet for people looking to kill time and earn some extra cash while doing it. Like Swagbucks, InboxDollars has over 5 million installs and looks easy enough to use. 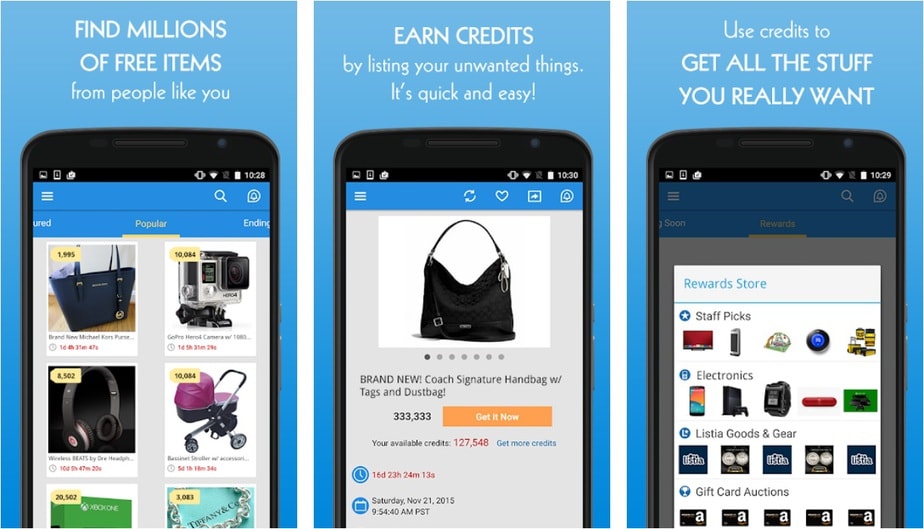 One man’s junk is another man’s treasure. Listia and Free Stuff are apps that follow that adage and allow users to advertise the stuff they’re willing to give away for free or for a minimal amount. It won’t hurt to download and try and see if someone among the millions of users happens to be nearby, or if you yourself are willing to give some stuff away for free. Pay it forward, make the app popular in the neighborhood, and there will be free stuff all around. In Listia, every successful transaction earns points that can be redeemed for more free stuff in Listia’s own store. 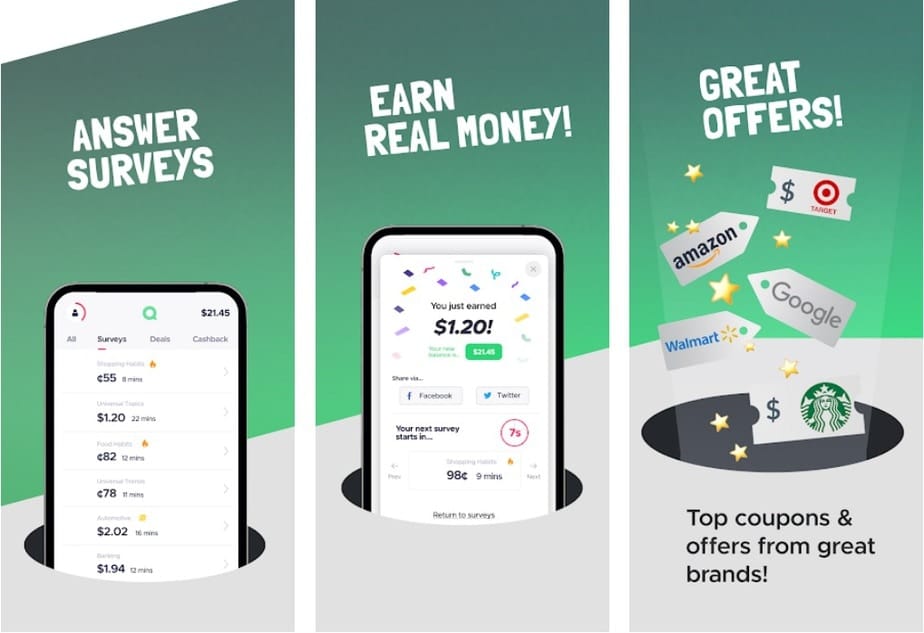 Qmee is a survey app that pays users simply for taking surveys and voicing out their opinions. The app is available for both iOS and Android. Qmee lets users earn cash upon completing surveys. The payouts can be redeemed through Paypal. Users can also earn gift cards and discounts from brands like Target, Walmart, Amazon, and Starbucks. Cash rewards are also offered to smart users who can answer pop quizzes and earn more rewards through referrals. So, who says surveys aren’t worthwhile? And yes, Qmee is legit and enjoys a high rating on Trustpilot. Users may have to work a bit, but QMee doesn’t demand minimum cash out. Earnings can be redeemed at any time through PayPal. 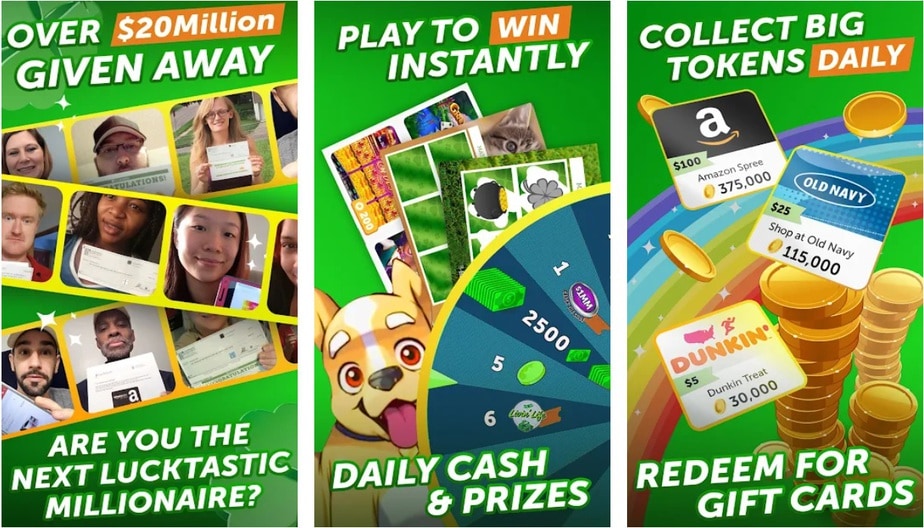 Lucktastic is basically the online version of the scratch card. The difference here is that the scratch cards are free and need not be purchased from the convenience store. This is an excellent app for scratch card addicts with real cash to be won daily, along with gift cards and other rewards. Lucktastic is completely free with new games every day, so scratching doesn’t get old.

Users would have to watch several ads though before being allowed a scratch. It’s a bit of a gambling app, so don’t expect to win every day, but prizes are guaranteed. The site has already given out over 10 million dollars to winners. Tokens can be redeemed for large brands such as Domino’s, Amazon, and Bed Bath & Beyond. 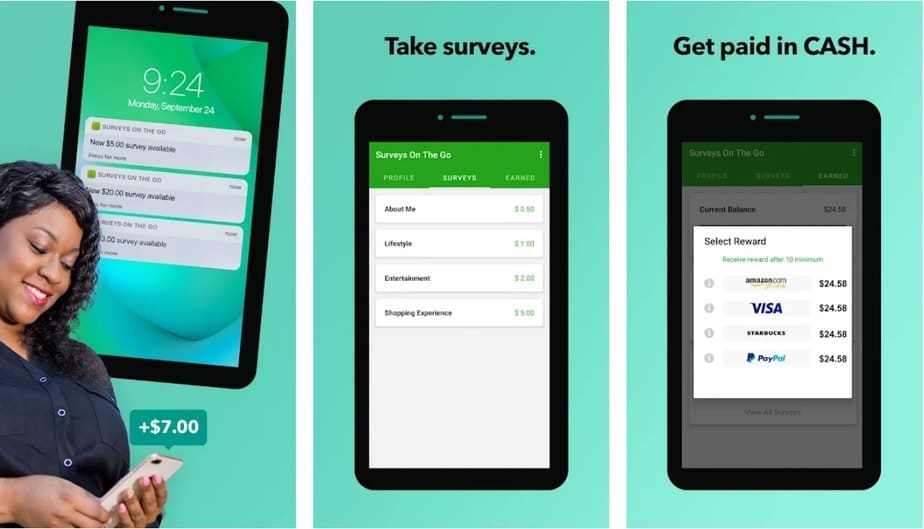 And lastly, we have ‘Surveys on the Go‘ by MFour Mobile Research Inc. As the name says, it’s basically a survey app. Depending on the survey, users are paid out $1-$5 for each survey, and some surveys even payout as much as $10. Depending on how fast you are or how dedicated, users can earn as much as $30 a day. There is a minimum cash out of $10 though. The app also promises to keep your personal information private. Surveys on the Go requires a user to have a Paypal account for cash out.

We do understand that some form of labor (like answering surveys and playing games) is required to get some stuff for ‘free,’ but as long as no money is involved in getting compensated and done in free time, it’s fair game.