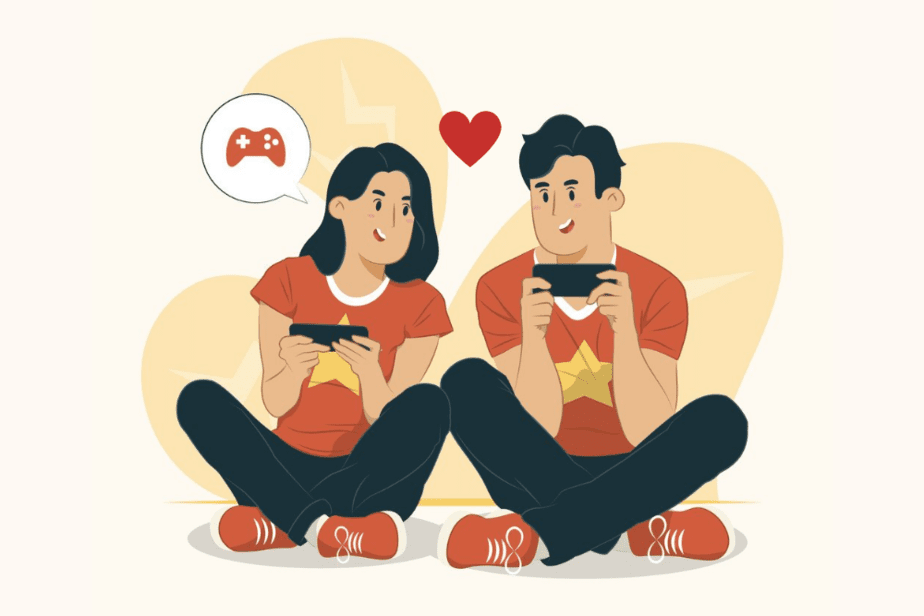 Gamer girls have existed even since Pac-Man hit the arcades. The trouble is finding them as they were a rare breed until the early 2000s, thanks to technology and better accessibility to games. And thanks to more technology and social media, finding gamer girls has gotten a lot easier. Gamer girls can also be found on dating sites, and there are also apps for those. This time, we discuss the best dating apps for gamers.

Don’t get us wrong; dating works both ways as gamer girls can also have the same problem finding the right gamer guy. Many gamer guys are testosterone-fueled rage machines who can be outright rude or just want the wrong thing. Finding a decent gamer can be a challenging game in itself, but the rewards are great. Two persons having the same thing in common and having fun is great — something which could be achieved by using only the best dating apps for gamers below. 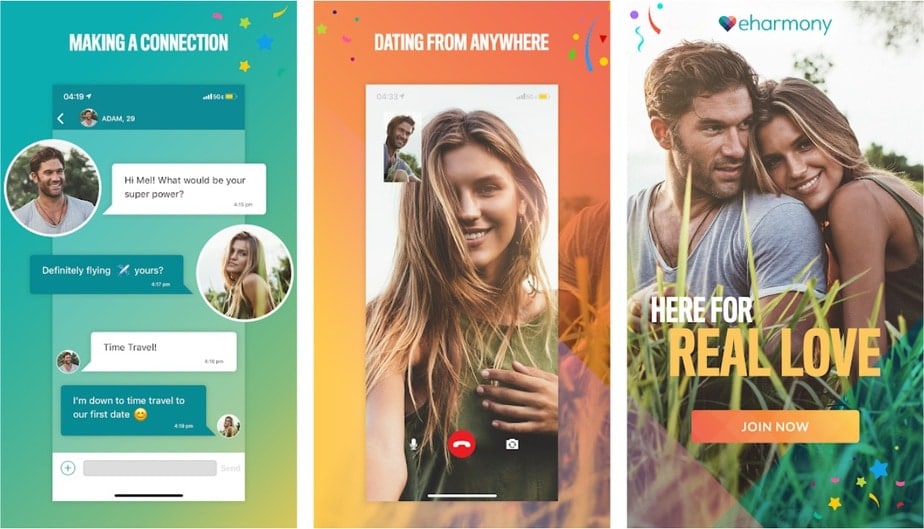 eHarmony is a dating site that has been around since the year 2000. It remains very much relevant to this day despite the competition, as it has managed to catch up in the app space with an intuitive and easy-to-use app. eHarmony has helped over 2 million people find their matches, thanks to a robust Compatibility Matching algorithm. Users would have to enter information about themselves in advance compared to just swiping away. There’s also a compatibility quiz users need to answer for the system to gain key aspects of their personality. This dating site would be perfect for gamers who want to find the ideal gaming partner. There are different types of gamers, from mild-mannered to aggressive, from casual to career. eHarmony has proven that there’s someone out for someone.

eHarmony allows for instant messaging between matches as well as live video chats. But for the serious gamer out on a quest, a paid membership is the option that would work when trying out eHarmony to gain access to more effective features. Otherwise, it would just be one of many generic dating apps out there. 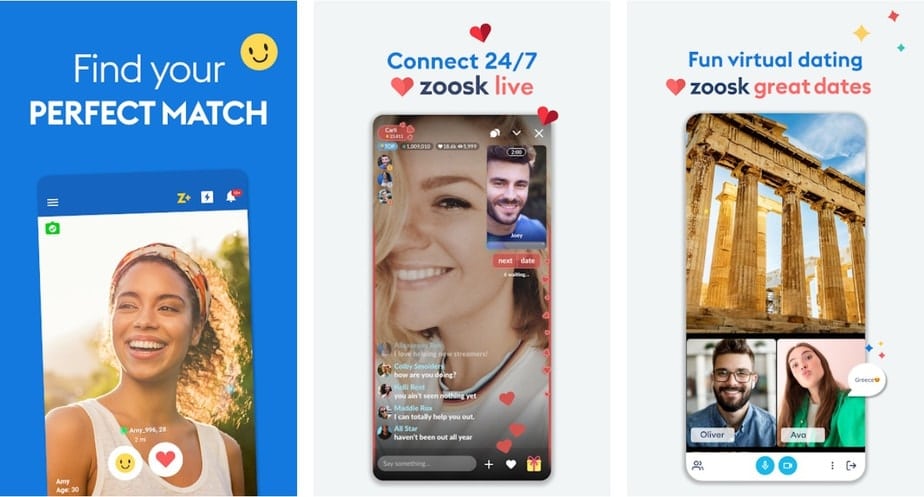 Zoosk is not exactly geared for gamers much like eHarmony, but with over 40 million users and over 3 million members, there’s a gamer out there just for you. Zoosk is one of the more modern dating apps in the market, and many gamers are sure to gravitate towards it as one of their options. And, thanks to Zoosk’s new live streaming feature, it would allow gamers to show off their gaming prowess to prospective partners. And if you’re familiar with that old gaming meme, where that sexy scantily clad warrior woman in WoW is actually a fat, bearded, middle-aged man, that is not the case with Zoosk, thanks to its identity verification process. As a result, it’s one of the safer dating apps out there and maybe even one of the best dating apps for gamers.

With Zoosk, membership is free, and the app is easy to use. But searching for the right gaming partner can be a challenge and would require the right tools. A paid membership can, of course, unlock those tools and features such as gift-sending a-la dating sim, profile boosting, live chat, and the ability to view those prospective matches who liked you. 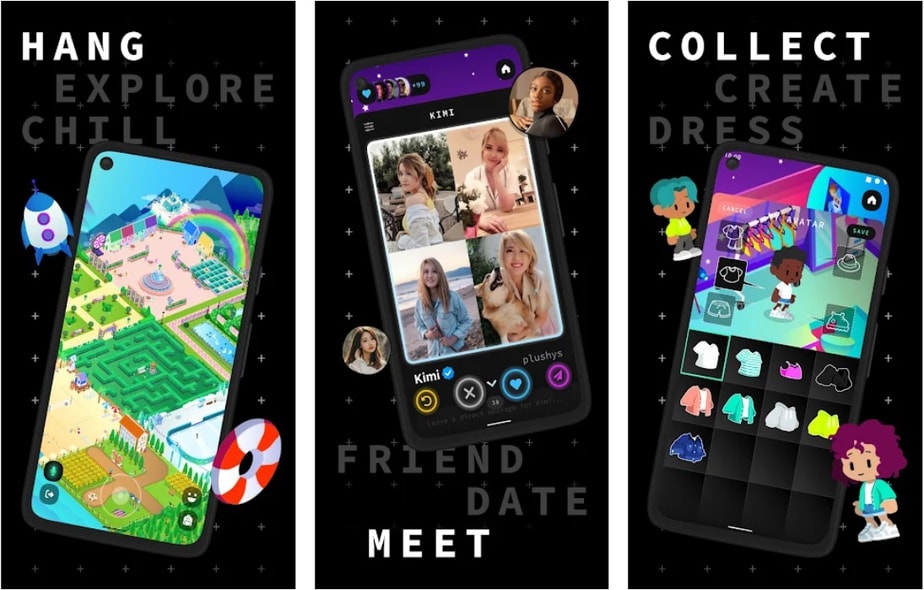 Kippo is a dating app known as the best for hardcore gamers. It’s available for both iPhone and Android, so no gamer gets left out. It’s quite popular and publicized, and with that, it has become popular among the gaming community, especially with Twitch streamers.

The app is a bit on the heavy side, but that won’t matter for hardcore mobile gamers and has over 3 million installs from the steadily growing gaming community. The app is also completely free to use though some special features can be unlocked with a premium membership. Kippo has a special and easy way of entering one’s personality traits. The app can easily quantify, compare, and produce better personality matches between gamers using sliders. The app also matches gamers based on the games they love and allows users to create unique profiles, live chat, and even play together online. Kippo also gets things started by giving users only 24 hours to break the ice; otherwise, it terminates the match. The threat of missing out makes even the timidest geek take a chance, as Kippo’s algorithm is rumored to have a high success rate. 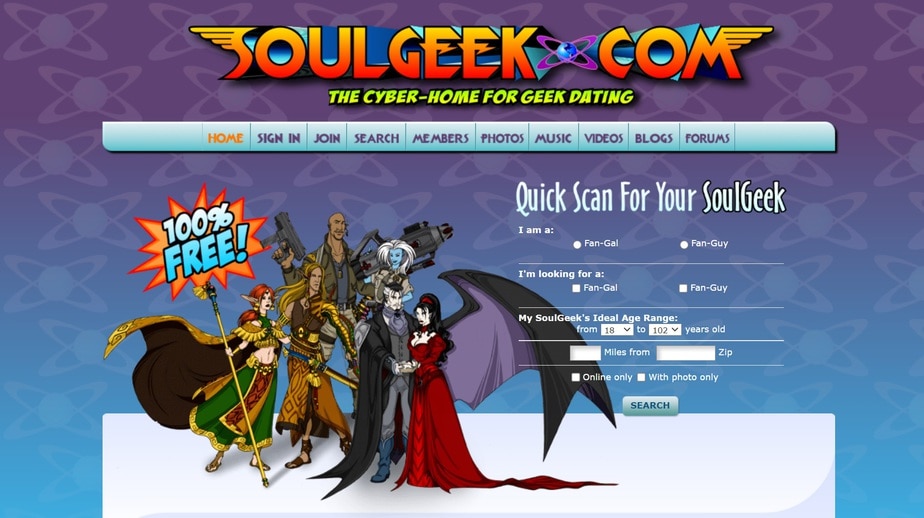 Gamers can be geeks and vice versa. With that, Soulgeek is an option gamers can go to in order to find their perfect partners, not just for games but for other geeky interests as well. Membership is fast and easy, and users can find their potential partners in no time, with all of the results being true geeks to the core, like cosplays, larping, tabletop card games, and more. Members can also impress and express themselves by posting various content.

This site, unfortunately, has yet to have a mobile app which is strange given its geeky userbase. Nor is its website mobile-friendly. However, the site does load well on mobile browsers. Not sure if the old 90s internet aesthetic is intentional or not.

Get it here: Soulgeek – The Cyber-Home for Geek Dating 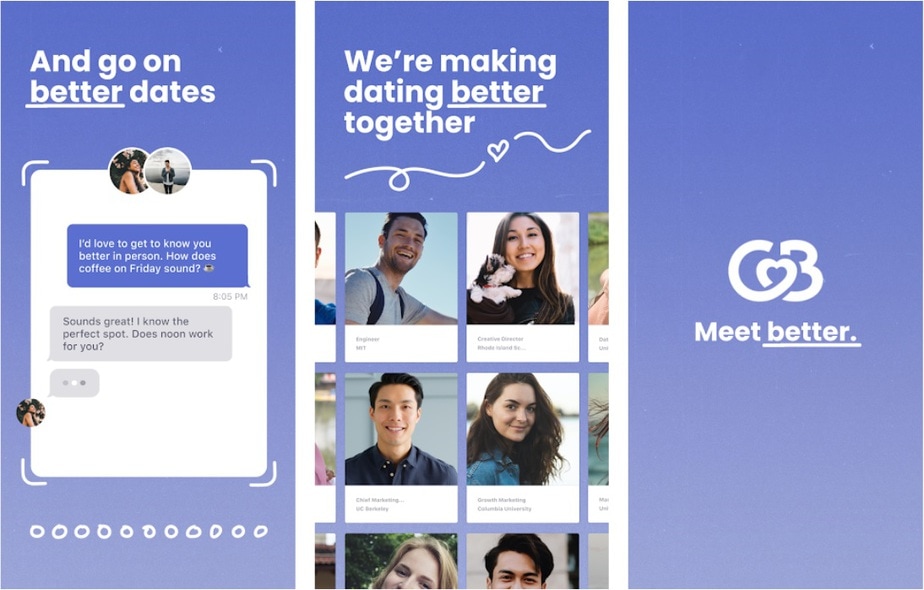 Coffee Meets Bagel is another dating site not exclusive to gamers, but it has a large membership, and its matchmaking algorithm is comparable with the other sites featured here. This means there’s a big chance of like-minded gamers sharing bagels and overpriced coffee somewhere out there. Coffee Meets Bagel claims over 100 million matches, though they don’t really say how many actually worked out. Instead of swiping away, users will get a list of potential matches every day at noontime. Profiles of those suggested are detailed and are not vague, so there’s less time and coffee wasted, and even less thanks to live chats. Coffee Meets Bagel is also known to facilitate meet-ups by limiting chat time. If a couple hits it off, they’ll have to meet physically to really get to know each other.

A sad reality is that if you really want company, users have to get a premium to make the most out of the app. The app will allow users to gain access to the people who liked your profile and use additional filters for better matches. The app itself is clean-looking, simple, and easy to use. 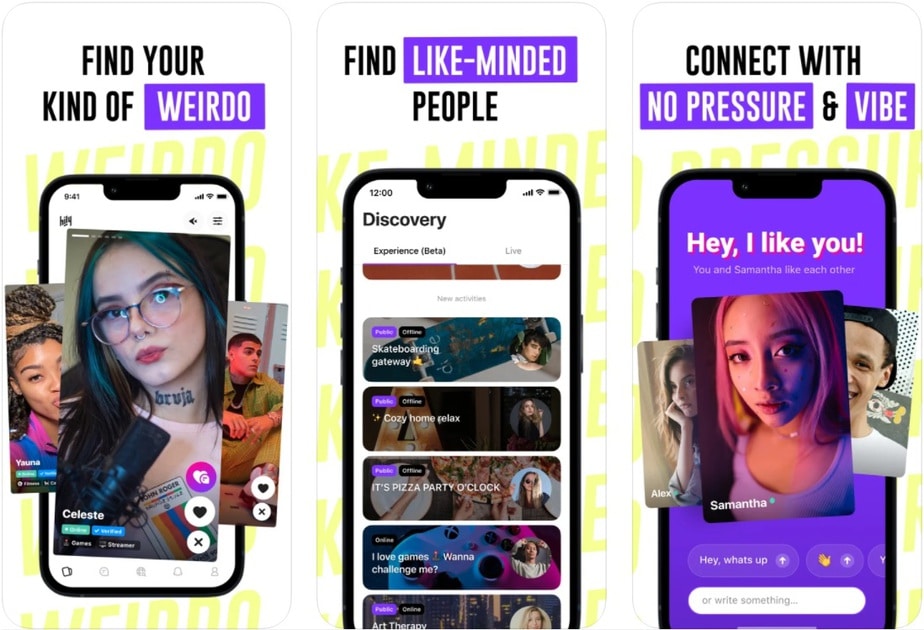 Hily is short for ‘Hi I Like You.’ Hily is another app gaining popularity amongst geeks and gamers as it encourages individuality, friendships, and relationships. It’s not like other dating apps either, as it encourages simple friendships among like-minded strangers. Relationships can develop over time. The app has over 10 million installs as a testament to its popularity, and lonely gamers are sure to find their like-minded partner amongst those millions of users.

The app is on the heavy side as it should be to be able to allow live chats, live streaming which is great between gamers, and video calls between users who’ve made connections. The app looks clean and is quite intuitive and straightforward. Much like Tinder, Hily uses a swiping system for potential matches, and the algorithm learns the user’s preference. Hily is also safe and secure as profiles are verified and go through a human validation system. And with that, the site will require a subscription for better results. 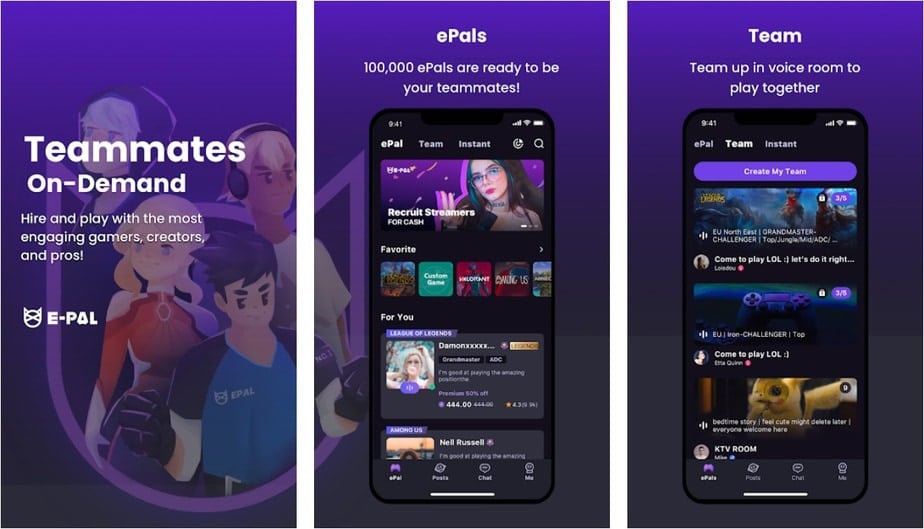 E-Pal is a growing gamer friendship/dating community with over a million users. Getting into E-Pal is not a bad idea, even if you’re already subscribed to one of the others listed here. E-Pal provides a platform where users can explore dungeons together, survive quests, sing karaoke, watch movies and anime together, or just get to know each other through chats. E-Pal supports over 100 of the most popular games on the market, so there’s bound to be something for everyone. As always with hardcore gamers, users can unlock other features and more potential partners by subscribing. 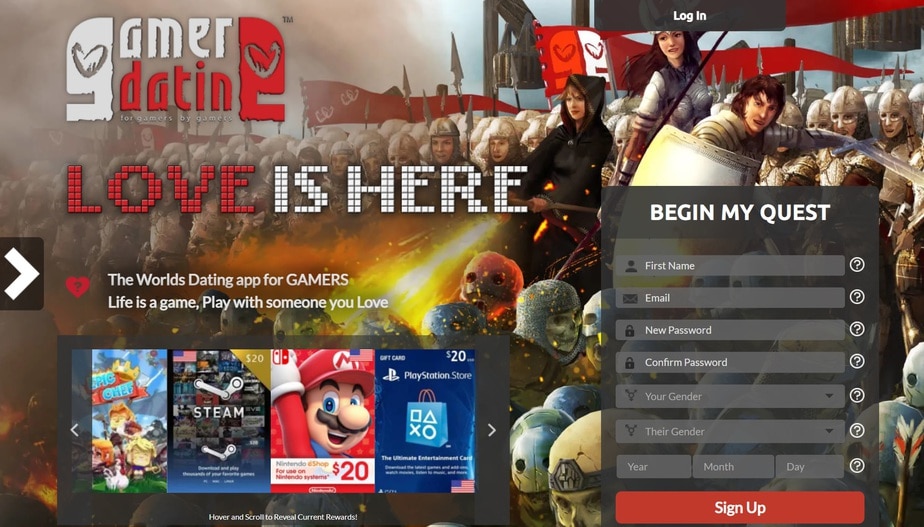 At last, one specific to the gamer alley, because life is a game, and it’s best to play it with someone you love. As the site name says, it’s for gamers looking for the perfect partner, and it’s unlikely that there would be pretenders. However, the gamer community can be quite serious sometimes and does not take kindly to pretender who casually played just one game and is looking to hook up with the hot-looking stereotype. True gamers understand each other’s passions and spend hours playing with each other.

Gamerdating is one site where gamers can indeed find people who understand them. No pretend-gamers here. Signing up is easy. The app however acts very much like Tinder. So it’s better to be on the main site instead.

We hope you find your perfect player 2 with this list of best dating apps for gamers. Whether you’re timid or aggressive, whether you’re hardcore or casual, there’s a like-minded gamer out there for you. The key to finding a gamer partner, or just a simple partner with these apps is, to be honest and straightforward with your profiles as these apps will only process what you have entered. So when the conversation starts, both parties would already know something about each other and easily hit it off. Good luck and enjoy!