Wouldn’t it be awesome to trick your friends into believing that you’re friends with a celebrity? For example, receiving a text or Instagram message from one or two members of BTS is sure to drive them wild. Or how about a text from mom saying you need to get home immediately, because your friends want to take you somewhere and you can’t say no. Another good use for most of these apps is for simple reminders, maybe even quotes for a day, or putting your boss’ name on the message to get something done. That’s what fake notifications are for, and this time we’ll discuss the best fake notification maker apps for Android & iPhone.

First, a disclaimer. These apps are for entertainment purposes only or to get out of awkward situations. These apps should not be used for purposes that can lead to harm to any individual, nor to spread fake news. So, without further ado, here is our list of best fake notification maker apps for Android & iPhone. 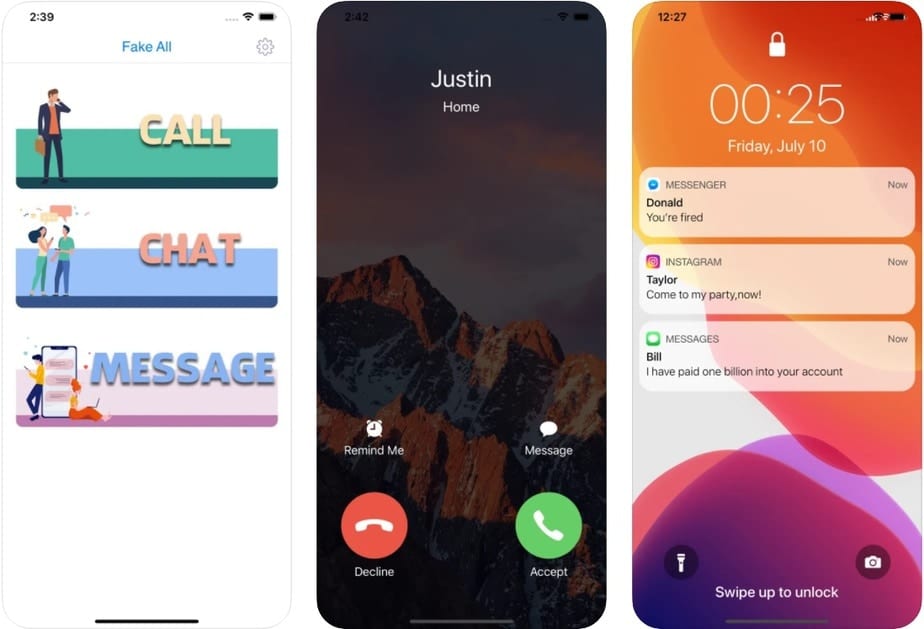 Fake All from Nanomag allows users to create fake notifications for SMS, Messenger, or Instagram, as well as fake chat screens for what’s been mentioned. It can also be set up to create fake calls. It’s so amusing, especially the fake calls function in case the fake messages don’t cut it. It’s also quite easy to use, so it easily makes it on this list of best fake notification generator apps for Android & iPhone.

However, the ads that pop up every step of the way of creation can take away some of the fun unless you’re a career prankster and are willing to purchase the premium version to get rid of the ads and get more features. 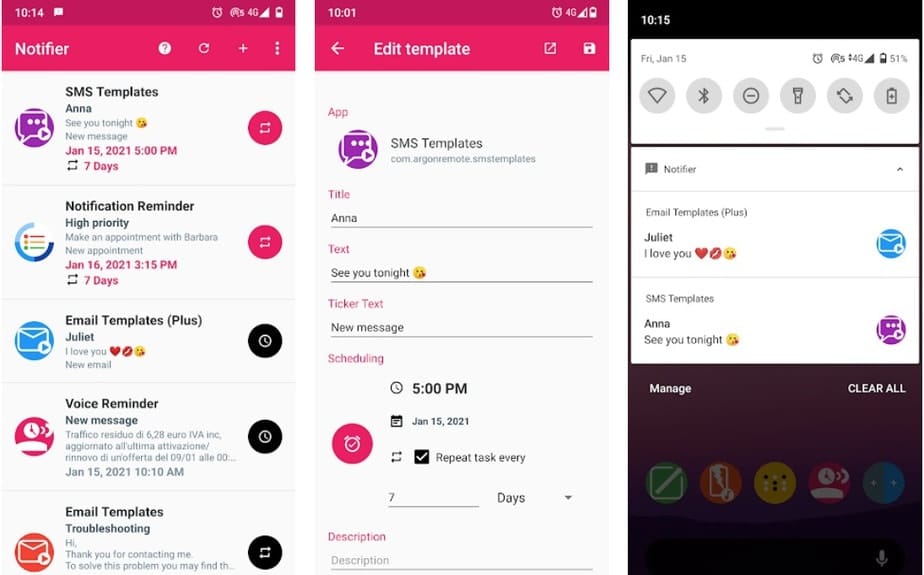 Fake Notifications (aka Notifier) is an easy-to-use fake notification maker by Argon Dev for Android. However, the resulting notifications might look a bit generic and quite different from what the original notifications would look like. Then again, in the Android ecosystem, everything can look different, and the person being pranked is none the wiser.

Making fake notifications is pretty easy as the user just enters the title, the text, the description, and the schedule, which can be made to repeat. Then the user can choose which service icon (practically all apps installed on the phone) will appear in the notification. The free version allows only three entries, and users can go premium for just a dollar and access other features.

As mentioned, the app will simply display a generic-looking notification with the service icon to the right compared to what the actual notification might look like. The notifications appear roughly as scheduled. Notifier simply works and could even be used as a reminder. 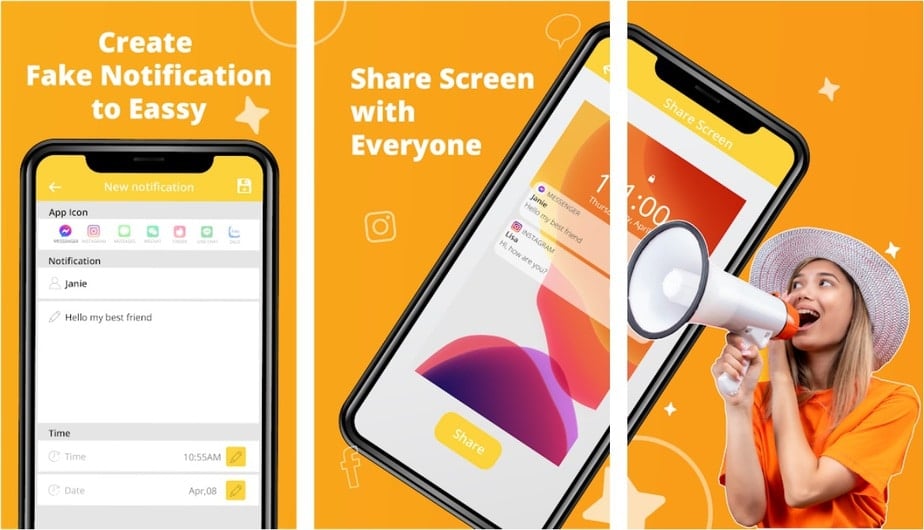 The app is fairly simple and easy to use, except the problem with Fake Notify is that ads appear during every step of creating the notification. There is no option of shutting down the ads as the app is completely free. Plus, it does make your Android phone seem like an iPhone.

Notifications Simulator app is basically what it says. It’s a more palatable name than the fake notification generator. It’s another easy-to-use Android app to make and schedule fake notifications. It’s very simple to use. The user needs to choose the messaging service, enter the title and message, select an image, and set the schedule. Users can immediately preview what the notification would look like. The notifications can be saved by adding them to favorites and created notifications.

However, the notifications appear on the generic side, no matter the messaging service chosen. Except for the Incoming Call, wherein the notification box gives the user choices to decline or answer. Other notification choices include Twitter, Instagram, Facebook, WhatsApp, YouTube, Telegram, LinkedIn, Gmail, LINE, and Tinder. Unfortunately, it doesn’t have a Messages service which is a missed opportunity. But unlike many other wonky fake notification apps in the Play Store, this one works well. 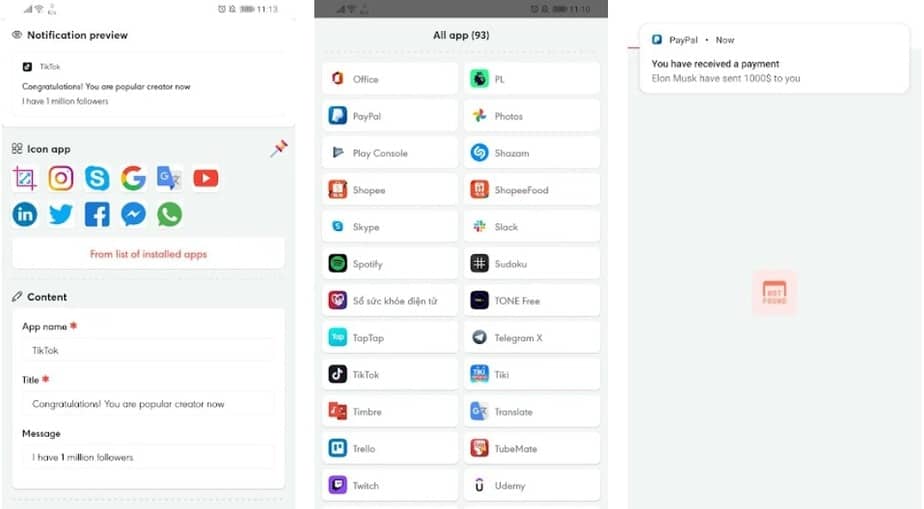 Funny Notification from Diagon Alley can be considered as one of the best fake notification maker apps for Android, thanks to its simplicity, ease of use, and lack of intrusive ads. The ads appear as banners or appear at the end of the creation process. Therefore, the ads do not interfere with the creation of the notifications.

To create a notification, the user can select from a predefined list of messaging services and apps. In case the users use other products, the app allows users to select icons from the phone’s installed apps. The user then enters the title and the message. They can then choose to deliver the notification immediately, after a specified amount of time, or at a specific time.

However, like some of the entries here, the notifications generated are also on the generic side. Nothing is different with the notifications except for the small service icon and maybe a chosen image to differentiate. Though users can immediately see what their notification would look like on top of the screen as they create it.

So here are all the best fake notification apps for Android & iPhone we could find. Unfortunately, there are not that many in the world of Apple, as apparently, they hardly tolerate apps of such nature. As for Android, the ones listed here are the ones we thoroughly checked and tested. Many other apps we’ve looked up are chock full of ads, one-trick ponies, or plainly just don’t work. So, enjoy messing with your friends with these fun apps.