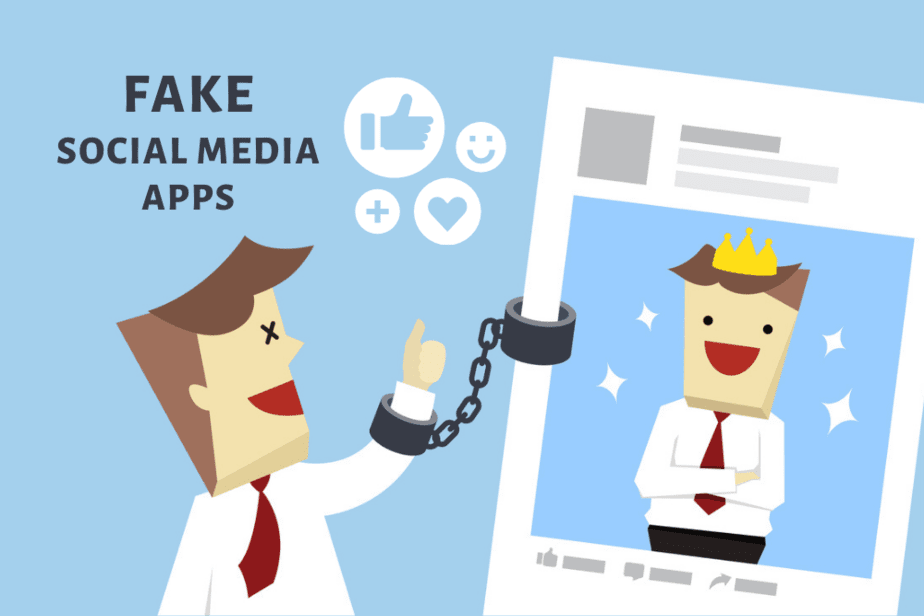 Who knew, right? That you can make fake social media feeds or interactions with fake accounts. And that you can make such on your Android or iOS device. But why? Various reasons include just messing with friends and family, and for marketing purposes in order to generate fake interest and sell products. However, they can also be used for political purposes to both positive and negative effects. But for whatever purpose users may use them for, here are the best fake social media apps for Android & iPhone. 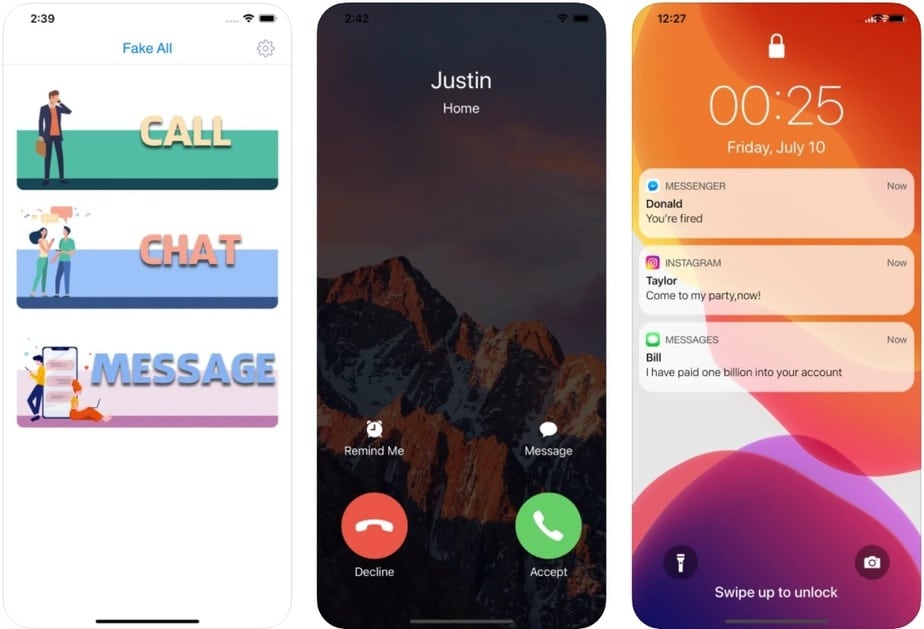 Fake All is quite an amusing app to use when you want to get out of an awkward meeting or gathering. So it deserves to be on this list of best fake social media apps for iPhone. Loving the fake message calls, robotic and ridiculous they may be, which is perfect for pranking someone. The same goes for creating fake chats for Messenger and Instagram. The downside to Fake All though are the ads that display almost every step of the way and the limited social media choices for fake messages and chats. Still quite a nice ‘tool.’ 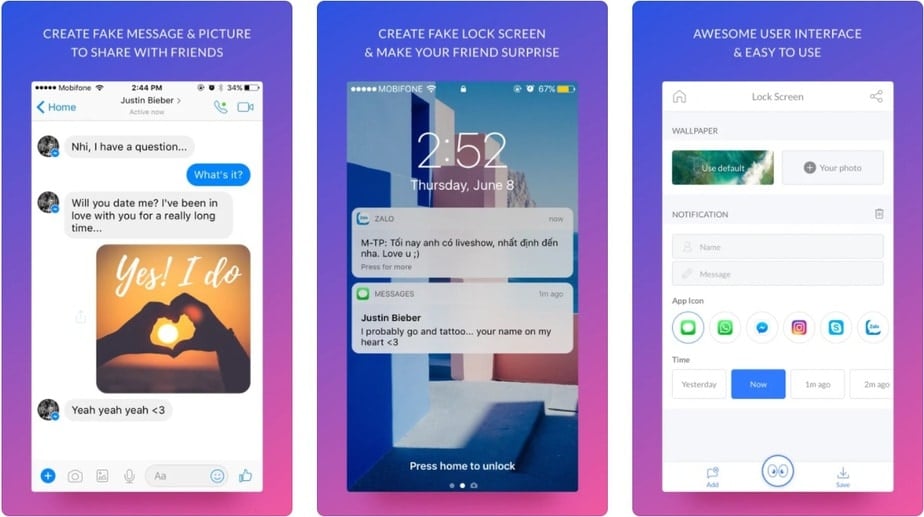 iFake for Android is free with ads while the iPhone version is not. It’s a fake social media chat generator that can be used to create fake chats with iOS visuals. Fake social media screens include Messenger, Instagram, Telegram, Tinder, and WhatsApp. It can also generate fake iMessage chats and supports iOS emojis.

iFake is easy to use and creations can be saved and edited, unlike other fake chat generators. Users can also create fake user profiles for more realistic-looking chats. Chat backgrounds can be modified for applicable social media apps. The downside to the free version is the sporadic appearance of ads and that it’s limited to chat creation. 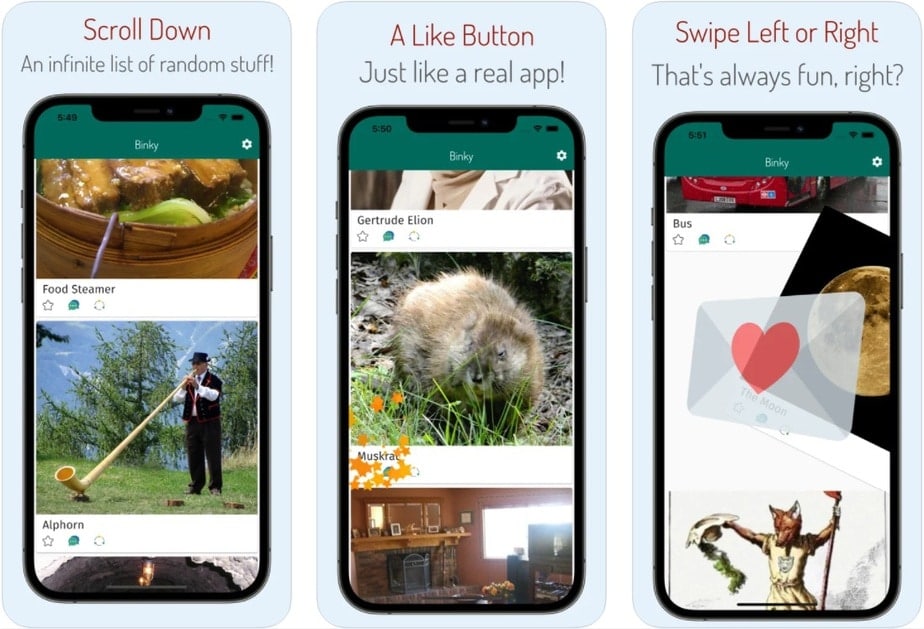 Binky is a unique entry in this list as it’s a true fake social media app. It is for anti-social people who are off the grid but want to experience what it’s like to be on social media. However, one does not have to be anti-social as there can be other reasons why some choose to be off the grid. And when downloaded, strangely enough, it does satisfy the addictive need to scroll through social media without actual social interaction. Just scrolling through various photos with and without captions, which for the most part, are quite interesting. The posts, called Binks can be liked, commented on, and reposted which boosts their ranking. Binky is easy to use (just scroll) and is available for both Android and iOS. 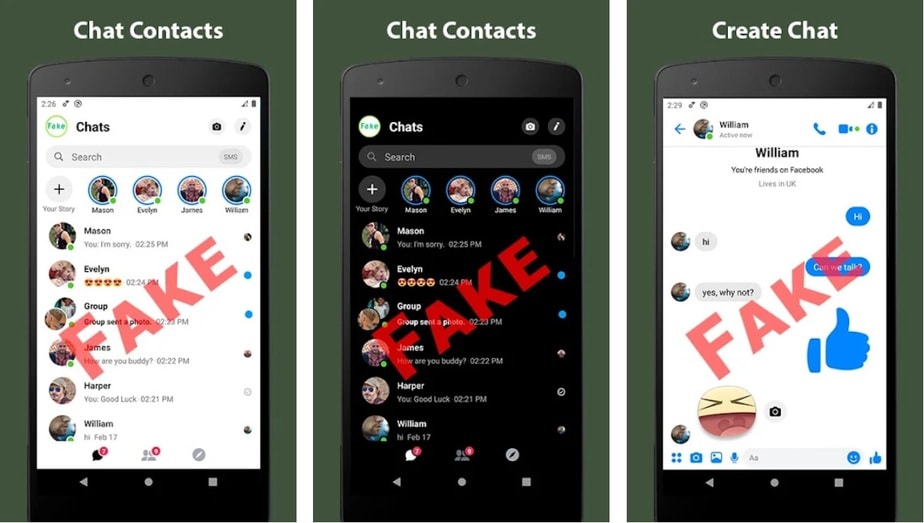 Fake Chat Conversation by Techroidis is an Android exclusive fake social media app. It’s easy but a bit confusing to use. It’s great because contacts can be imported which makes it quite easier to make fake chats and calls, and more authentic. Fake profiles and chats can be saved for future use. Fake Chat doesn’t specify which social media platform it fakes, but many can assume it’s Facebook or Messenger by seeing its backgrounds. The fake calls don’t have real audio, so the main purpose is to flash the fake call to anyone just to pretend. The fake chats support images and emojis as well which makes it a good candidate for this list. However, like many of the free options in this list, the ads can be annoying. 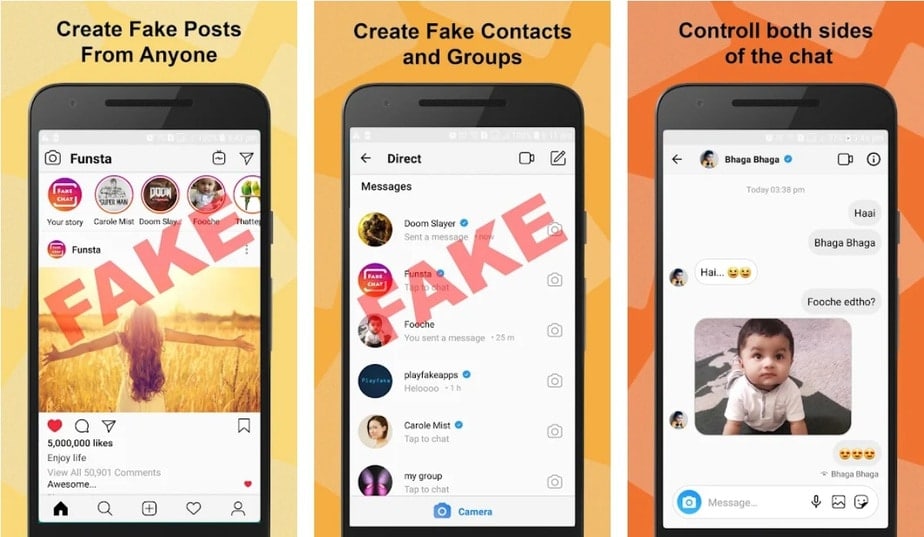 Funsta is great for Instagram users who want to do some self-marketing and for pranking friends and family. It allows for the creation of fake profiles, fake users, fake posts, and fake reels, all of which can be saved for later use. The interface is somewhat like Instagram itself and is easy to use. The only downside to Funsta’s free version is as always, the ads. The Live simulator is cool, however, the fake Live creation is still in the works which will make Funsta more fun to use. 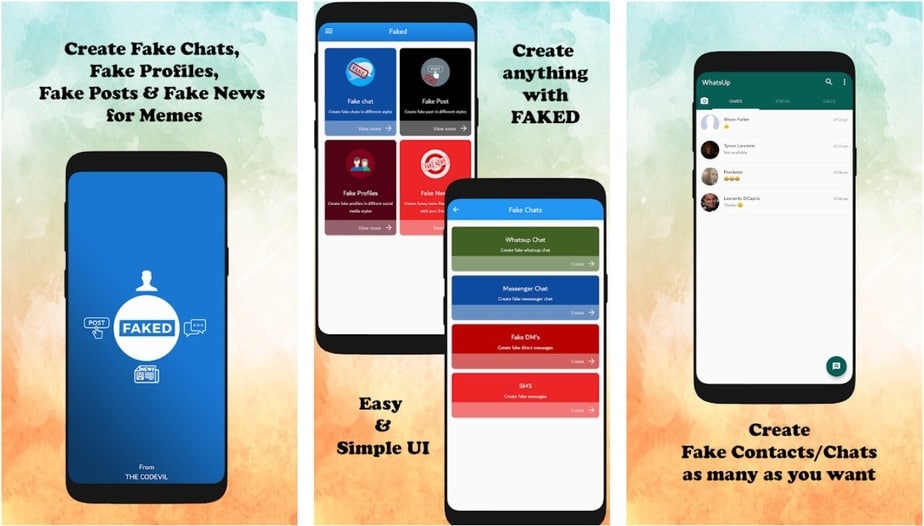 Faked is a social media generator app for Android and is capable of creating fake chats for WhatsApp and Facebook, faked DMs for Twitter, and also fake SMS. This app can create fake profiles and posts for Facebook, Instagram, and Twitter. It can also create fake news screens.

Faked is a simple and easy app, good for rudimentary purposes. Because the major downside to Faked is that it does not save any of the creations. It relies on users to save creations by doing screenshots, which is what’s supposedly being saved from real social media in the first place. It’s unfortunately tedious to recreate stuff if needed, but it serves its purpose and is free from ads.

TwiNote from Chartreux is one of the best fake social media apps for Twitter addicts. It has over one million downloads and mostly good reviews. How so? First and foremost, the app can function offline. Second, TwiNote looks very much like Twitter and doesn’t even bother tweaking the Twitter name.

With TwiNote, users can create a fake profile and add many fake users, each with their own profiles. The UI looks very much like Twitter which makes it very easy to use, and users can create fake posts, fake trends, and even fake DMs. Creating these things can be tedious though but so is elaborately messing with others’ heads. What gives it away is the strip ad at the bottom which Twitter doesn’t have, but if it’s worth it, going pro removes it.

Aside from messing with others, the app description refers to the app as a sort of diary or notepad where users can roleplay with the fake users created and record the events of the day. The same can be said about some of the other apps listed here. Its authentic look and ease of use put TwiNote among the best fake social media apps for Android & iPhone. 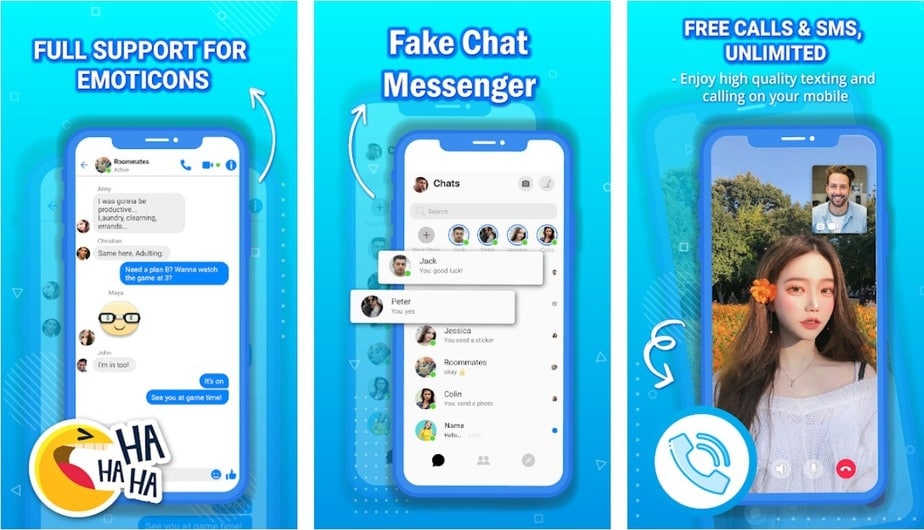 Fake Messenger Chat Prank is a good fake Messenger app. It allows for the creation and saving of fake profiles and is quite easy to use. Just like TwiNote, this app simply works. For a convincing fake chat, Fake Messenger has emoji, image, and video support. There is also an AI messaging setup where the fake other side automatically replies, which is rather fun. This app also creates a fake call screen just like Fake Chat. This app also has over one million downloads and overall positive reviews. Again, because the app is free, sporadic ads are inevitable. 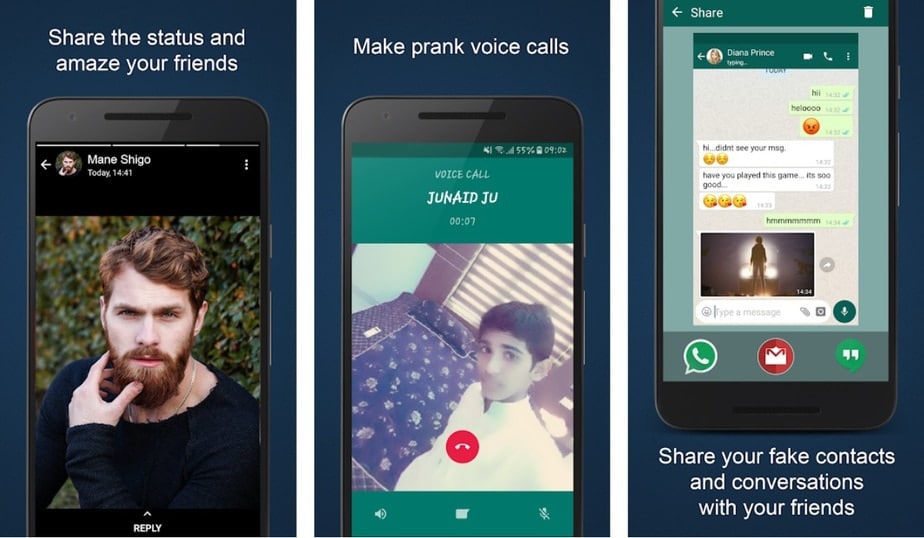 WhatsMock enjoys over 10 million downloads and has overall good reviews which make this one of the best fake social media apps for Android & iPhone. This free app however is dedicated to the creation of WhatsApp fake chats and nothing else. But since WhatsApp also enjoys a wide following, many can’t resist using this app to mess with their friends, family, and colleagues.

WhatsMock’s screens convincingly copy WhatsApp screens for a more convincing prank. What’s great about WhatsMock is that aside from allowing the creation of fake contact profiles, it can import contacts from the phone list. This avoids the tedious creation of several fake profiles which is an issue of many in this list. The interface is expectedly like the app it’s parodying, so WhatsApp users should be at home. WhatsMock also features full emoji support, image and video support, create and receive fake calls.

So, there you have it. 9 of the best and free fake social media apps. Now, these are for entertainment or self-promotion purposes only, as specified in their relative disclaimers. Have fun!