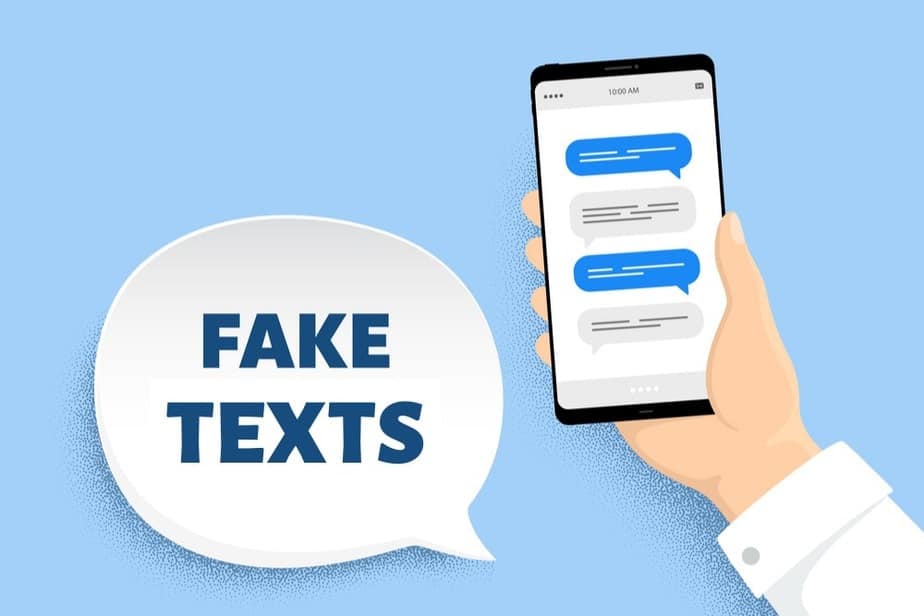 With the power of technology and creative apps, fun games and pranks can now be done through the use of phones. Nowadays, making fake messages to prank or to make a joke for someone is the new way of getting a laugh. But, how do you do it?

This is where fake text message apps for Android come in. Through the use of these apps, you can fabricate and make your own (fake) conversations about anything, anywhere. These apps can make it look like you’re in a real conversation that took place on WhatsApp, Facebook Messenger, Instagram, or other messaging apps available. Check these fake text message apps out, and see if your friends or family will be able to tell the difference between real and fake! 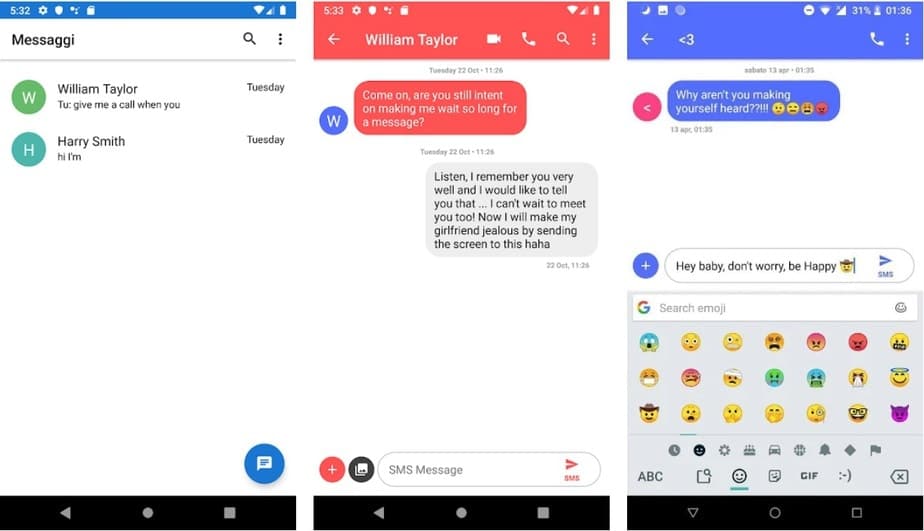 Fake Message Free is a straightforward app that allows you to type out any messages. The format for this app mirrors a typical Android messaging app. It allows you to type out fake conversations, making them look like a genuine exchange between two people. To edit the name of the contact you’re seemingly messaging, just tap the bar on the top containing the name of the contact and replace it.

The messages you can fake through this app aren’t only restricted to text. You can also insert multimedia images in your messages to make it seem more authentic and real. From the names of the contacts, to the messages of both the sender and receiver, you can make a fake conversation look completely real. 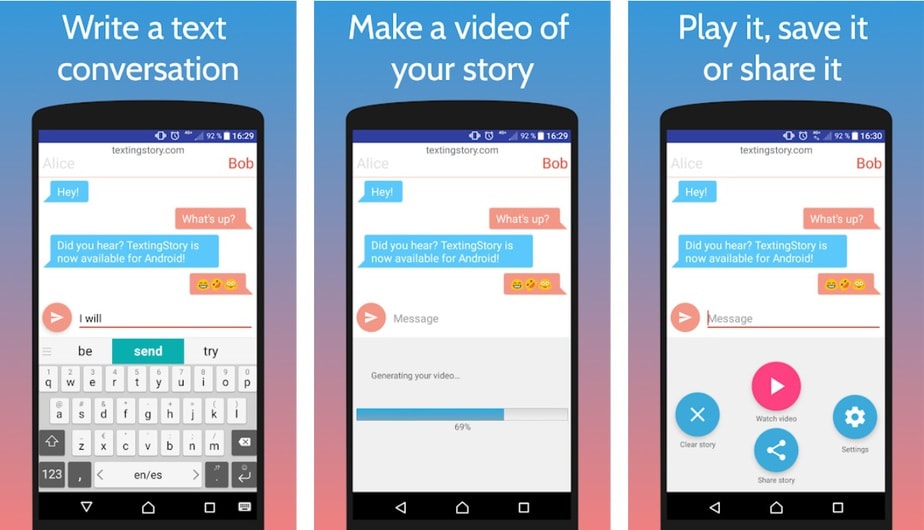 Similar to Fake Message Free, TextingStory is another app that you can use to create fake conversations on your Android phone. Creating conversations on this app is similar to other fake texting apps. TextingStory also includes a video feature where you can record you “texting” your assigned recipient. These videos can be used to share your funny conversations on social media or to prank your friends and family. 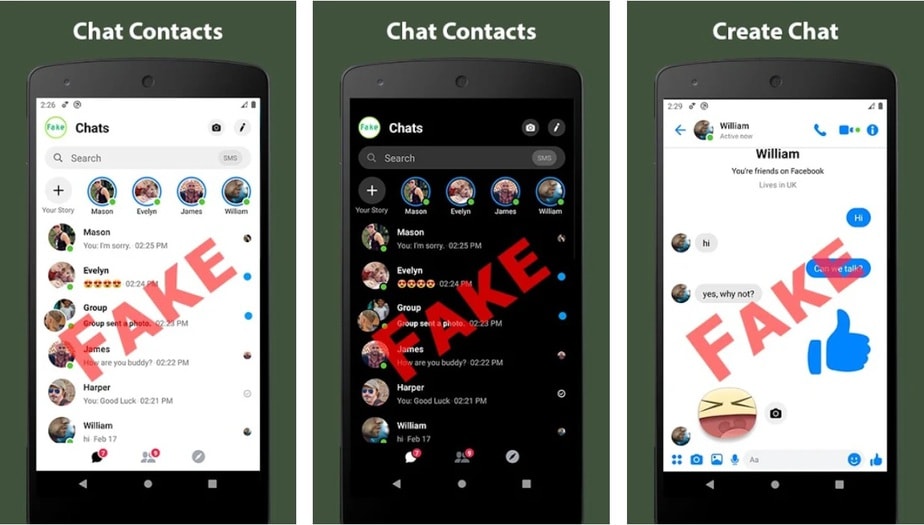 Fake Chat Conversation is an app that mirrors other famous messaging apps such as Facebook Messenger. If you’re an avid user of the Messenger app, this application might be more convincing to use compared to other fake messaging apps. You can edit texts and conversations, as well as the names of your contacts. Besides texts, you can also send classic emojis and stickers to your conversations.

You can also choose to add profile photos next to the names of your contacts to make it much more realistic and foolproof. The features you can use depend on if you’re subscribed to the unlimited version or the free version of the app. 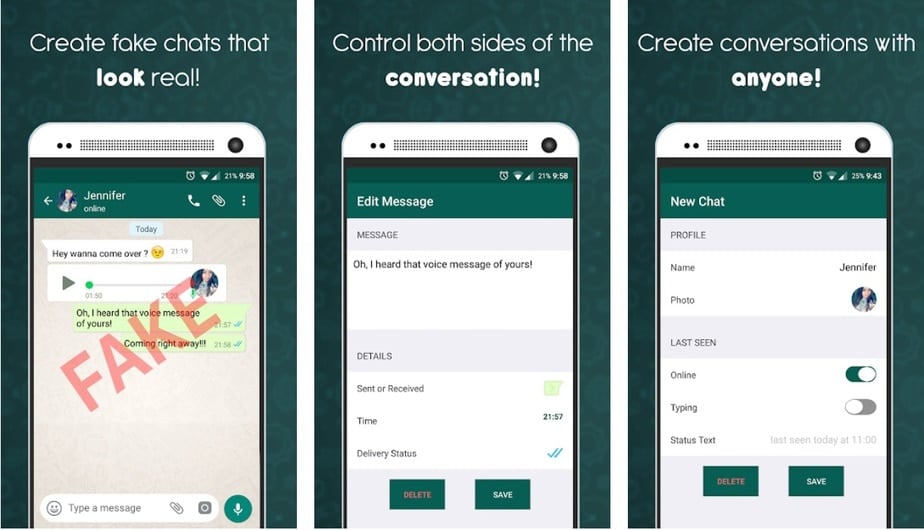 This app called Fake Chat Conversations is another app that can make it look like you’re having authentic conversations with other people on WhatsApp. One of the best parts about this app is that it’s free with unlimited use.

Besides regular text messages, you can also send fake voice messages with your own voice. You can also edit other aspects of the conversation like the contact name of who you want to text, and even the delivery status of the text. There’s also an option to place fake missed calls in the chat to make it more realistic. See if your made-up conversations can fool your friends! 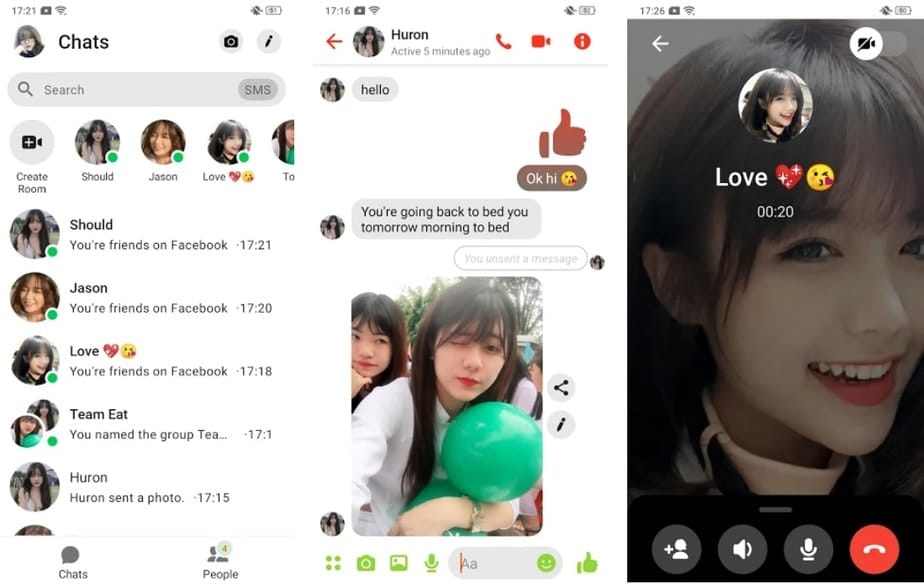 This is another app that makes it look like you’re having real conversations on the Facebook Messenger app. What makes this app great is that you can edit all of the details of a real Messenger chat conversation, such as the texts, contact names, and pictures. You can make use of sending photos as well to make your texts look realistic.

You can even fake messenger calls and take screenshots to properly fool your friends and family! With the user-friendly interface of this app, it makes it almost too easy to fake your own Messenger conversations. 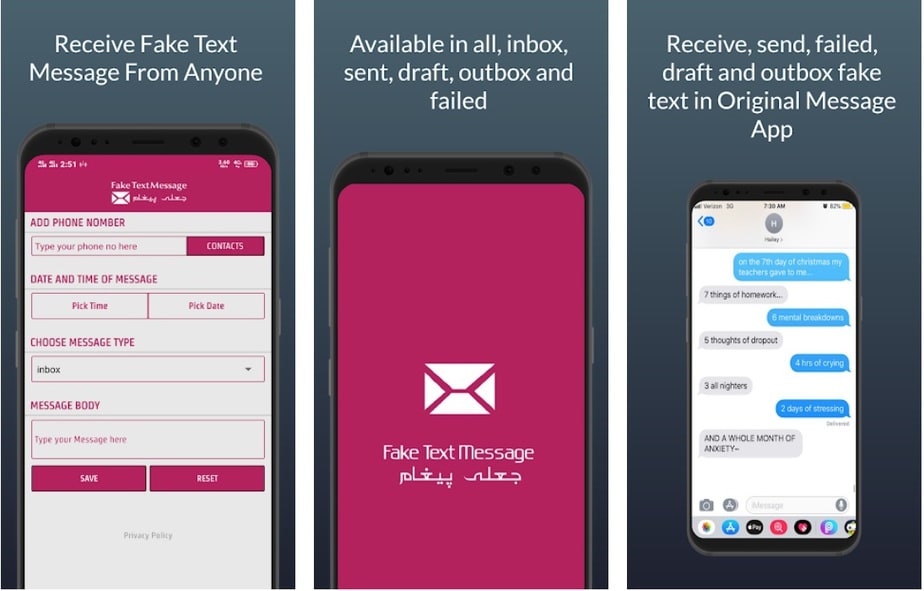 This app is another fake messaging app that can mirror the look of an iOS or Apple phone. Since this app is for Android, you can fake conversations as an Apple user to fool more people. However, there is also an option to simulate the messaging format of Android.

You can edit everything from your text message drafts, your inbox, and messages in a conversation. Almost everything about the messaging aspects of your phone can be replicated through this app, making it difficult for people to tell the difference. 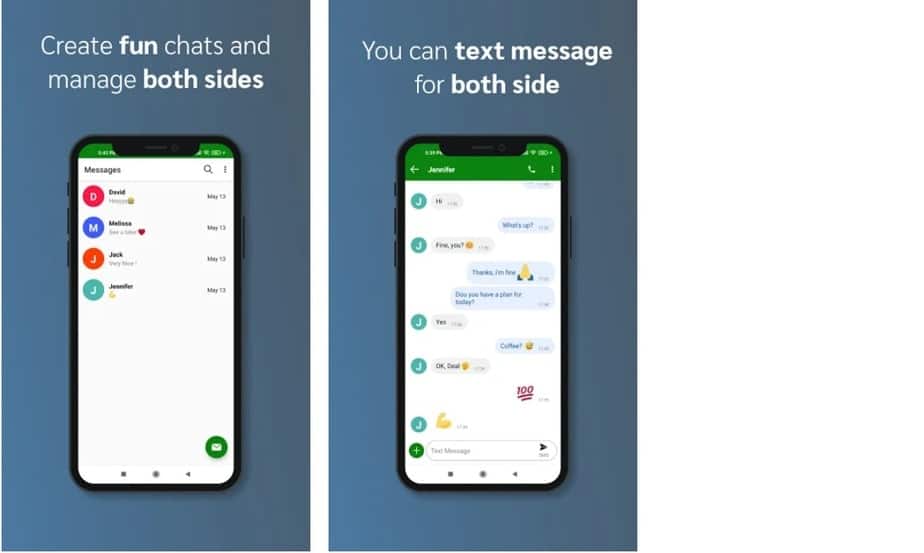 The final fake messaging app in this list is another alternative to simulating conversations on the default Android messaging app. Like other apps, you can manipulate the names of your contacts, their photos, and the text messages that show up on both ends. You can also send emojis from your keyboard to make it look much more realistic.

Now you don’t have to wonder how fake message conversations are made! You can even try it out and make a few fake chats for yourself. Download your choice of fake messaging apps for Android now!