Everyone can make a post on social media. But the key to getting famous is by getting the most attention amidst the billions of other posts. If your post looks cool enough to stop the viewer from scrolling, then you’ve made it. Then keep at it. There are tons of apps out there that can make your text posts, images, and videos shine brighter than the rest. This time we tackle some Best Free Apps for Creating Social Media Posts. 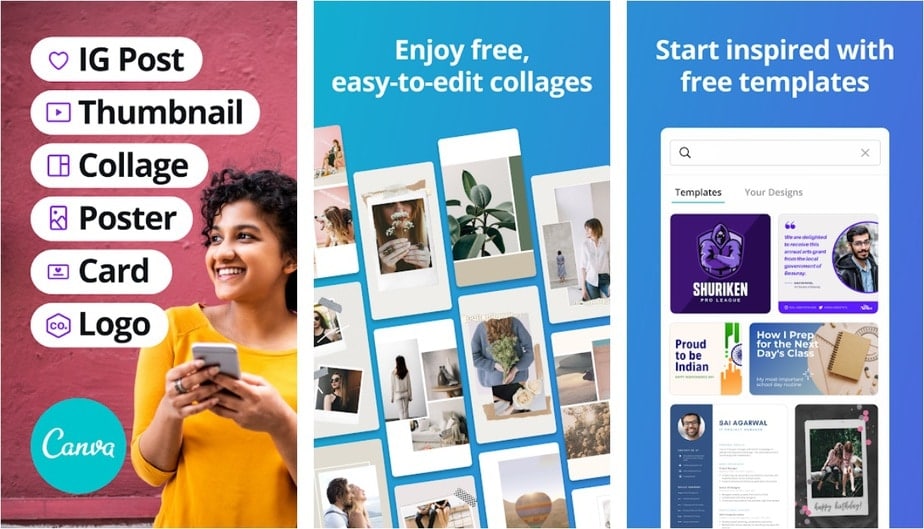 Canva is an all-around graphic editing app for Android and iOS. There are plenty of graphics design lessons on YouTube centered around or using Canva. Canva has over 6 million reviews on the Play Store, not counting those that have not reviewed the app and those installed on iOS.

Canva can be used for social media graphics even for those without knowledge of graphic design, thanks to dozens of templates and hundreds of elements that users can work with. Fonts, shapes, and colors of these templates can be easily manipulated thanks to Canva’s great implementation of drag and drop as well as having a categorized and intuitive interface. For the free version, the ads can be annoying, and some graphics will have watermarks, which can be dealt with by cropping or using other apps. 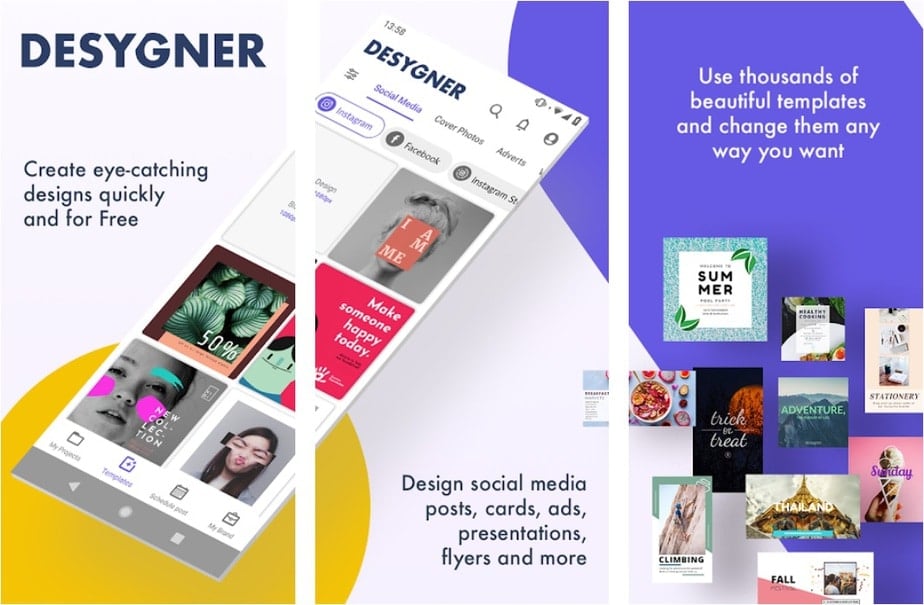 Desygner is one of the most flexible graphic design apps available to spice up any social media post. The app is free to use and earns through ads and in-app purchases. Desygner is not only perfect for social media posts, but like Canva, it can also be used for flyers, ads, posters, infographics, logos, etc.

Desygner has templates for social media objects such as headers, posts, and banners for the top social media platforms, including Facebook, Instagram, Twitter, Pinterest, YouTube, LinkedIn, and Tumblr. In addition, Desygner can access thousands of graphic layouts and templates, shapes, objects, and stock images. Designer sports a clean interface that is easy enough to use. Users can create a masterpiece in no time. If Forbes and Social Media Examiner trust this product, then it must be one of the Best Free Apps for Creating Social Media Posts. 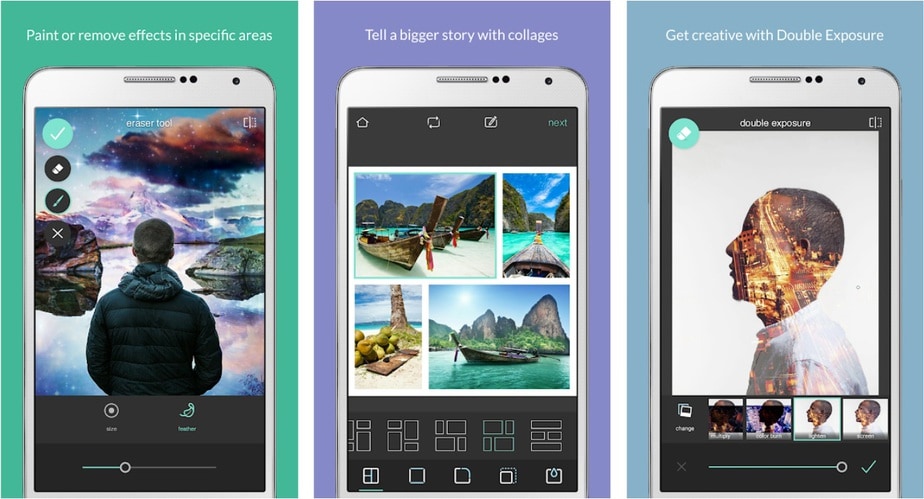 Pixlr by Imagine Lab is one of the best mobile image editors out there. A vast majority of social posts are comprised of images. Images, when manipulated nicely, become viral and even become memes. The app is trusted by over 50 million users, which is quite impressive. Editing one or multiple images should be a breeze with this app, thanks to its easy-to-use and attractive UI.

Pixlr can easily create amazing collages and enhance images with cool photo effects. Text can be added and turned into memes with various fonts and great-looking borders to finish things off. Pixlr is also free but contains ads and earns from in-app purchases. 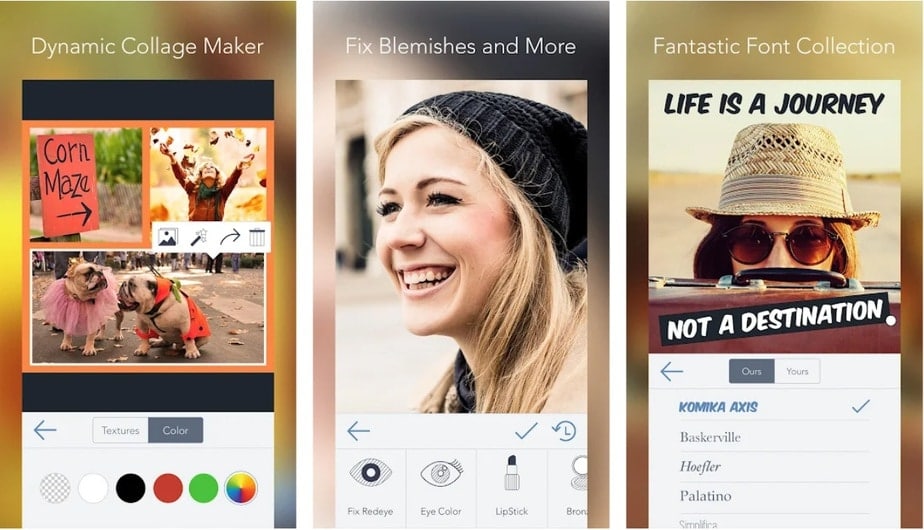 BeFunky is another popular image editor trusted by over 10 million users. BeFunky is available for Android, iOS, as well as desktops. This app is well-known for its ability to create amazing collages. It can stylize photos, create various effects, add text and stickers, remove blemishes, and even batch editing. There are tons of templates available, along with stock images and vector graphics.

The interface for mobile is straightforward to use so that anyone and everyone can easily create excellent image posts. BeFunky also integrates with social media platforms such as Facebook, Twitter, Instagram, Flickr, and Tumblr. What’s also great about BeFunky is that it’s absolutely free without annoying ads, thus earning its place in this list of Best Free Apps for Creating Social Media Posts. 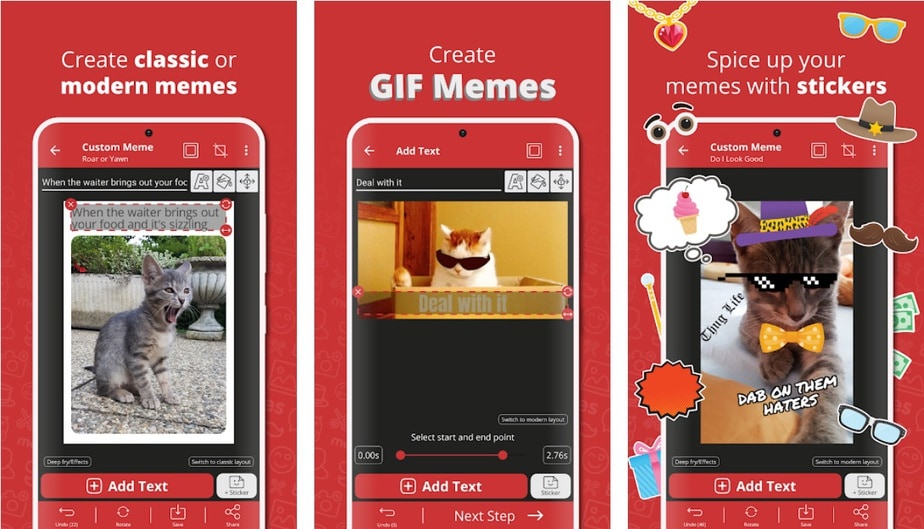 What’s social media without memes? With over 10 million installs, who knows how many image memes are now out there besides the usual suspects. Meme Generator by ZomboDroid is a clear must-have if you want a big piece of the attention pie.

Meme Generator allows users to create custom memes from popular pre-existing templates, over 2000 of them. Aside from the meme templates, custom memes can be enhanced using custom layouts. What’s also great about this is its ability to create GIF memes and has access to Tenor’s vast GIF library. As for the app itself, there’s pretty much going on, but nothing too difficult to follow.

Created memes can easily be shared to Facebook, Instagram, Twitter, and Messenger. Like BeFunky, this app is free, and the resulting images won’t even have watermarks. So be the one to create the next Distracted Boyfriend or Bad Luck Bryan. 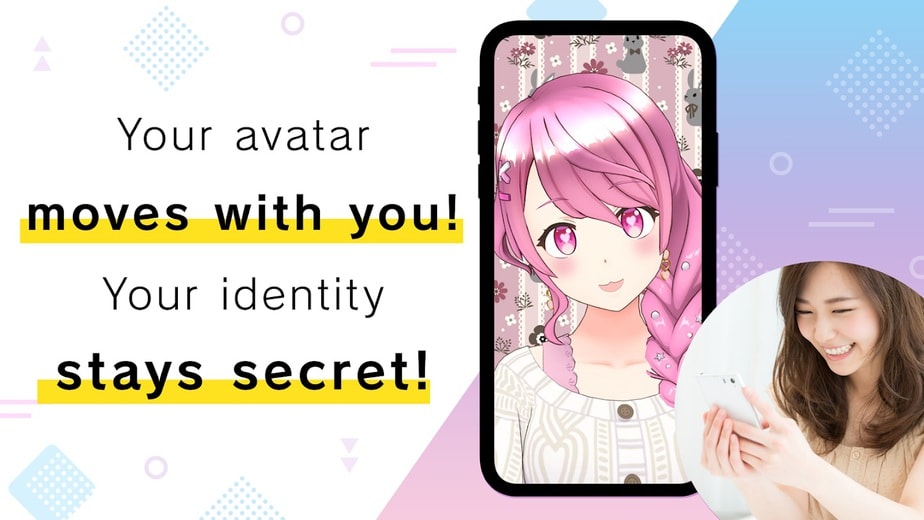 REALITY is an awesome avatar creator for anime fans and non-anime fans alike. Users can create awesome-looking anime avatars of themselves, take screenshots, compose videos, or create live streams on the REALITY platform along with millions of users. It’s available on both iOS and Android platforms. It’s very fun to use, and with REALITY, users can get into the modern Vtuber craze.

When creating the avatar, there are tons of options to choose from and tons more with their in-app purchases. After creating an avatar, users can immediately stream to their fellow REALITY users or record their videos on the phone and post their videos on YouTube with the help of other apps. The UI is quite easy to use despite having many options. It makes excellent use of the camera as the avatar follows your head’s every move as well as eye and mouth movements.

REALITY isn’t alone, but it’s one of the best, and it would be unsurprising that the app is already in use by thousands of YouTubers and Instagrammers. If only there were a version where torso and hand movements are also supported, users would have to get imaginative and creative using their creativity for other platforms. Otherwise, this should be anyone’s arsenal of Best Free Apps for Creating Social Media Posts. 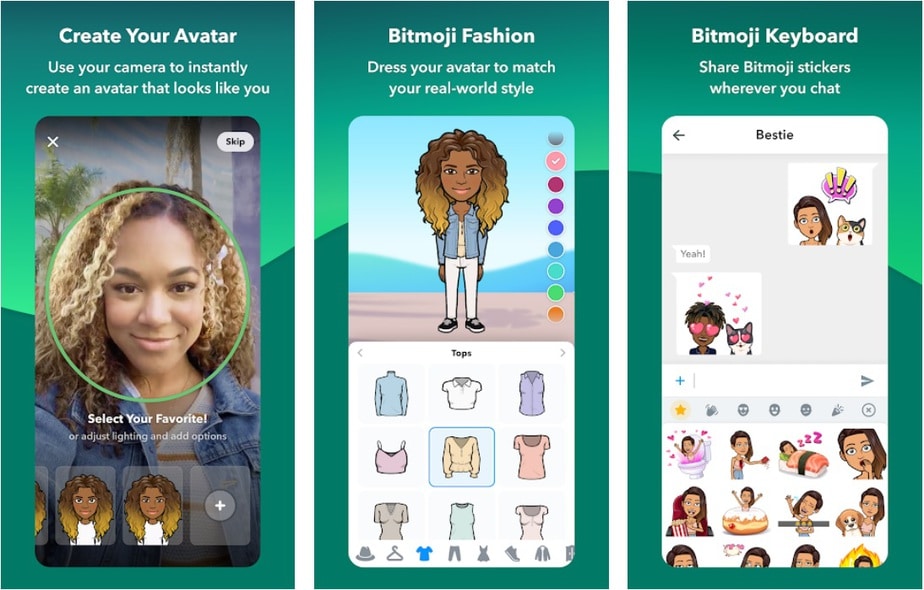 Speaking of avatars, Bitmoji is a truly personal emoji keyboard app that’s not just great for communicating with friends but also for making social media posts shine. Bitmoji is great for use with Facebook, Instagram, Snapchat, and Whatsapp. Users can create their emoji characters or avatar based on their likeness. The avatar made will then be rendered as emojis with various poses and expressions depending on the occasion or situation. And it can be later changed any time, and the rendered custom emojis will follow suit. It’s one of several apps that lets creativity fly.

Aside from choosing among hundreds of rendered expressions, any message typed on the keyboard can be made into an emoji. That can be copied and pasted onto Instagram Stories, WhatsApp, and Facebook and Messenger posts. 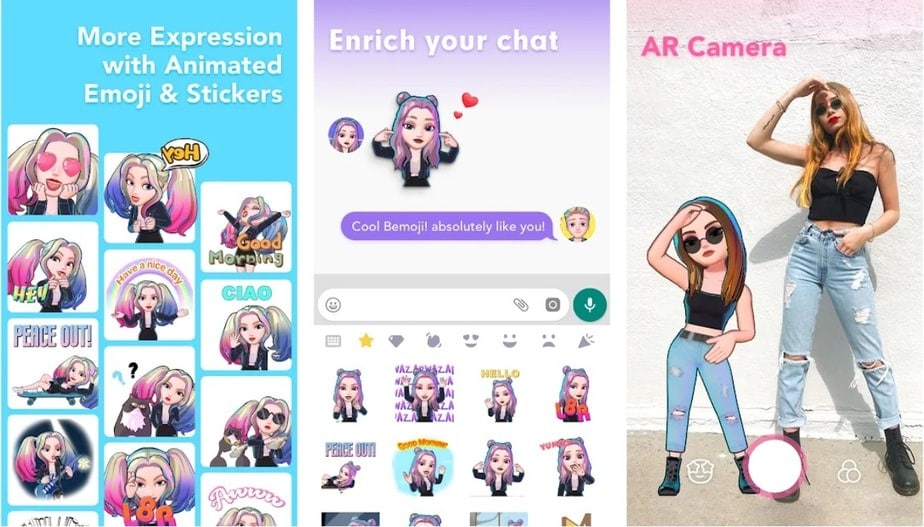 3D Avatar Creator is similar to REALITY but for non-anime fans who like a Western feel. Unlike REALITY, 3D Avatar Creator integrates with the keyboard to allow the avatar’s use as an emoji, just like Bitmoji. Avatars created can also be used with Tiktok, Snapchat, Instagram, and other platforms.

There are plenty of options available when creating avatars, so the app is sure to capture the users’ likeness. These avatars can then be used as stickers and emojis to support other social media posts. The app is gaining ground with already more than 5 million users. It’s free to download, but users will have to put up with ads and in-app purchases like many apps. 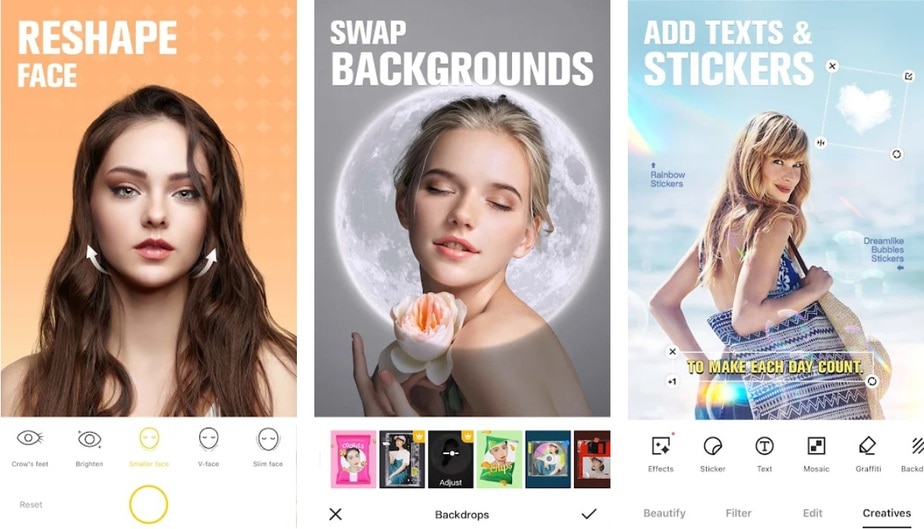 Camera 360 by PinGuo is an old app, but the classics often stay the best, which is why it’s still around. Camera 360 for iOS and Android has been downloaded by over 1 billion people and stands as one of the Best Free Apps for Creating Social Media Posts.

Camera 360 is basically an alternative camera app that builds upon the constantly improving cameras of current smartphones. Remove blemishes from your selfies and pictures with one touch, put on quasi makeup, and add many backgrounds and stickers. There are also a ton of great filters available for download for free or for purchase. The free version also lives on ads, but they’re not very intrusive. Camera 360 is not just for pictures but also for short videos that can be posted on social media like Tiktok and Messenger. If you don’t have it yet, Camera 360 is sure to improve your social media posts.

Improving your social media presence shouldn’t be expensive. The actual capital is your own creativity. We hope this list of Best Free Apps for Creating Social Media Posts becomes a great help.