Until recently, managing files on the iPhone was non-existent. It was limited only to copying photos and videos from the DCIM folder or uploading books, movies, and music through ungainly iTunes. This was due to iOS app sandboxing, wherein apps can only read and write files on their own sandbox and cannot access other app files. It’s for iOS’s own good. However, it’s become possible recently, so we’ll discuss the best free file managers for iPhone.

Until iOS 13, iOS didn’t have true file management. Early file managers had to go through some technical hurdles to provide a semblance of file management. However, Apple was pushing for the iPad to become a laptop alternative, and to do that, proper file management is a must. So now Apple provided a way for apps that support this scheme to have visible folders and files and allow users to manipulate them much like other operating systems.

Apple provides the Files app as the default file manager for iPhones. Files, however, is quite limited. For example, it cannot even see the images folder or the music folder. But there are other alternatives, much like there are alternatives to Windows File Explorer. We’ll discuss the advantages and differences as we sift through this list of the 6 Best Free File Managers for iPhone. 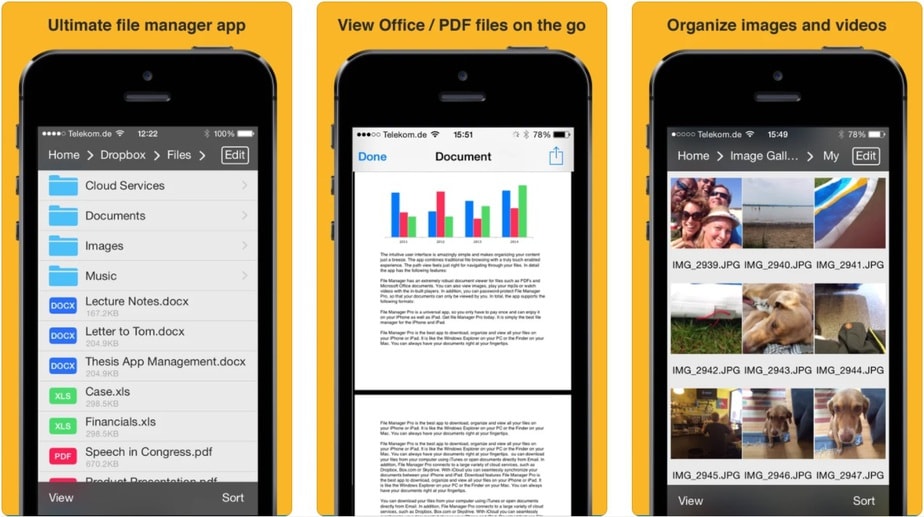 First is File Manager by Zuhanden provides some basic file management for iPhones. Compared to the Files app, File Manager can see into the iPhone’s images folder. Users can import images from the images folder into the user-created folder so they can at least be renamed and organized. Renaming images is a major shortcoming of the iPhone’s image gallery. But that’s about it. It’s possible to copy files back and forth through iTunes and view them through their respective apps. File Manager can copy from Dropbox in the free version and other cloud services in the paid version. File Manager also has a built-in web browser which is useful if you don’t want anyone peering into your web history and give them Safari as a decoy instead.

One shortcoming is that email attachments can’t be saved directly into any folders created by Zuhanden’s file manager. This is despite this app being in the top 30 for Business. Another is the choice of menu text color. Either it’s an iOS 15 issue, or the upper menu can hardly be seen because of its white font, and that it doesn’t support Dark Mode. Purchase of this app is one-time and does not require any subscription.

Documents by Readdle is different from File Manager, wherein it allows other apps to see its folders. Documents can see into and import from iTunes files and photo albums. It can connect to cloud folders like DropBox and has a built-in web browser. Documents also allows drag and drop functionality when copying and importing files. Plus, Documents doesn’t show any intrusive ads making it one of the best free file managers for iPhone. Using Documents feels more natural, and there are plenty of options available for a free version. Who knows what’s in store for the Pro version, Documents Plus.

Like File Manager, Documents provide users with a sandboxed main folder to store and manipulate files as they see fit. As mentioned, it feels natural to use due to its intuitive interface and its good support for Dark Mode. Mentioning the free web browser, it’s also partnered with a VPN for secure web browsing. Documents also allows for creating files like text and scanned images directly into its folders; quite handy for secure notes. 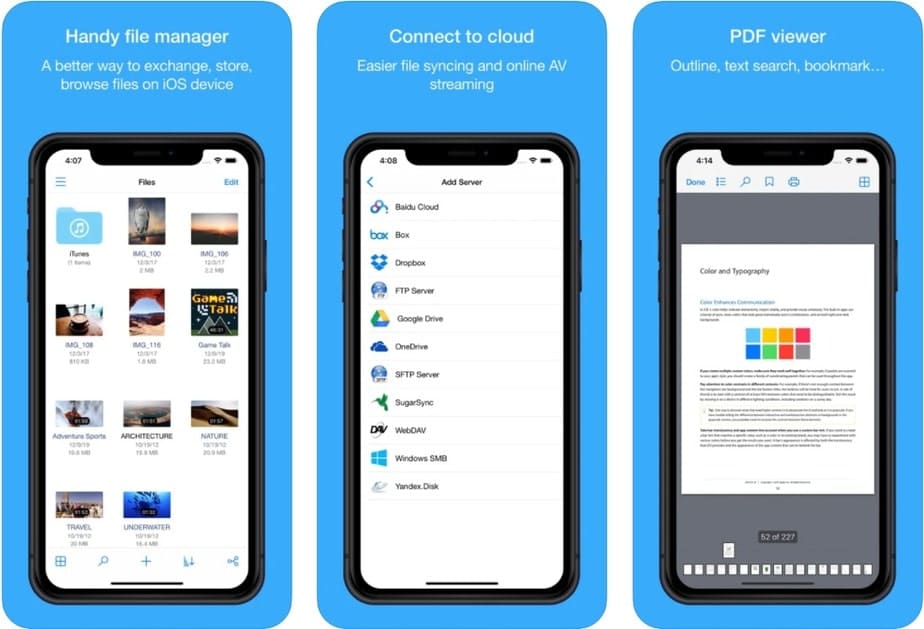 File Hub by imoreapps is a great file management app for iPhone, much like Documents by Readdle. What’s more, it’s great for importing music and video and creating playlists with them. File Hub, like Documents, also integrates with the iPhone file system, where it allows for file saving by other apps directly into its sandbox folder. However, compared to Documents, File Hub looks simple and spartan, and it allows users to see and import from the phone’s iPod/music folder.

Importing files is quite easy with the plus sign from the intuitive menu at the bottom of the screen. It also allows for creating text, pictures, and audio recordings. File Hub can also access cloud files from plenty of cloud storage services, including Box, DropBox, OneDrive, Baidu, and FTP. Like Documents, it does not have intrusive ads, but relies on offering much more in its Premium version, which makes it deserving to be in this list of best free file managers for iPhone. 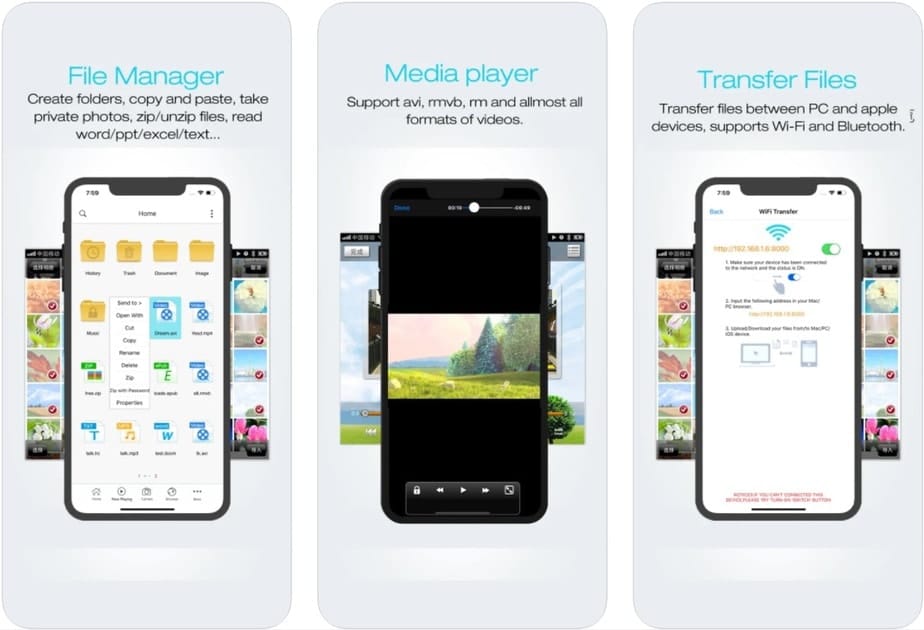 File Master by Shenzhen Youmi is regarded as the number one iPhone file manager in 30 countries. Out of the way, users are presented with a Windows File Explorer-esque interface. It’s simplistic and familiar and relies on long presses. However, unlike Documents and File Hub, it cannot import files other than the iPhone’s photo album. It has a media player that can play MP3s and video files and a document viewer. File Master allows the creation of text and image files from the camera and allows Wi-Fi transfer between devices.

Like the other apps in this list, File Master allows the renaming, copying, deletion, sharing, and emailing of files. It’s also quite secure as it allows files to be hidden. The main folder can be secured with passwords and authentication. Unfortunately, the free version doesn’t connect to any cloud service, but it has a built-in web browser like the others. 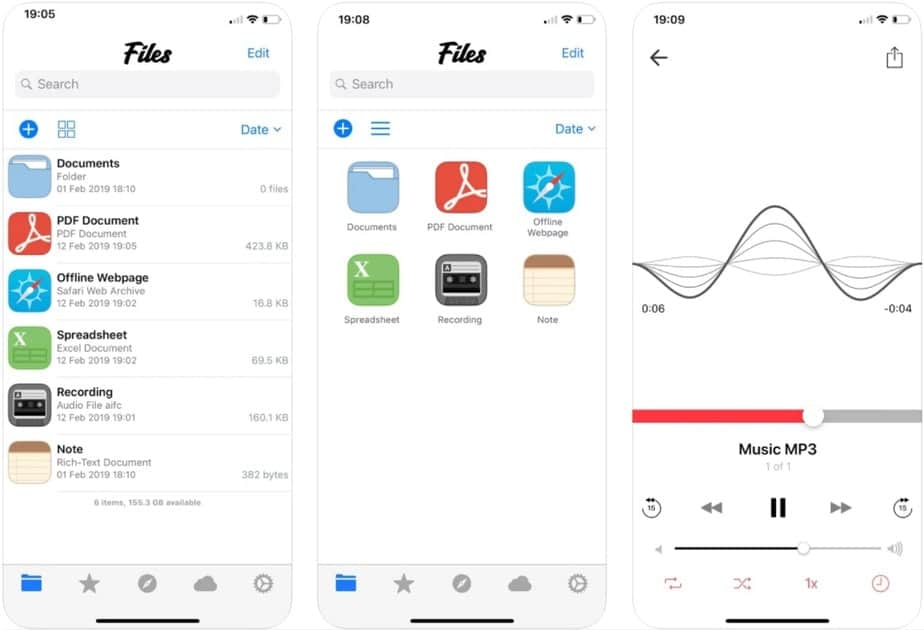 File Manager by TapMedia is another great file management app deserving of the Best Free File Managers list for iPhone. It does have ads though, but unlike File Master, it displays small banner ads below the screen. The interface itself is simple with a search bar on top, followed by a Plus button that adds content, an option to display content as icons or lists, and the sorting option. The Plus button creates new folders, imports content from the phone’s image library or directly from the camera, creates notes, creates voice memos, or adds content by opening the built-in web browser.

File Manager by TapMedia also connects to online services, including Dropbox, Box, OneDrive, Google Drive, iCloud, and FTP. Users can tag often-used files as Favorites and instantly access them. The user can download files from the cloud services and manipulate them on the phone. Like File Master, it has built-in media players and document viewers that support major file types.

There is one annoying issue though. The menu that allows for adding content does not sometimes appear unless the screen is pulled down, which we suspect is because of the small banner ad below the screen. Another issue is that files cannot be copied or moved between folders on the phone itself. Otherwise, File Manager from Tapmedia is pretty decent. 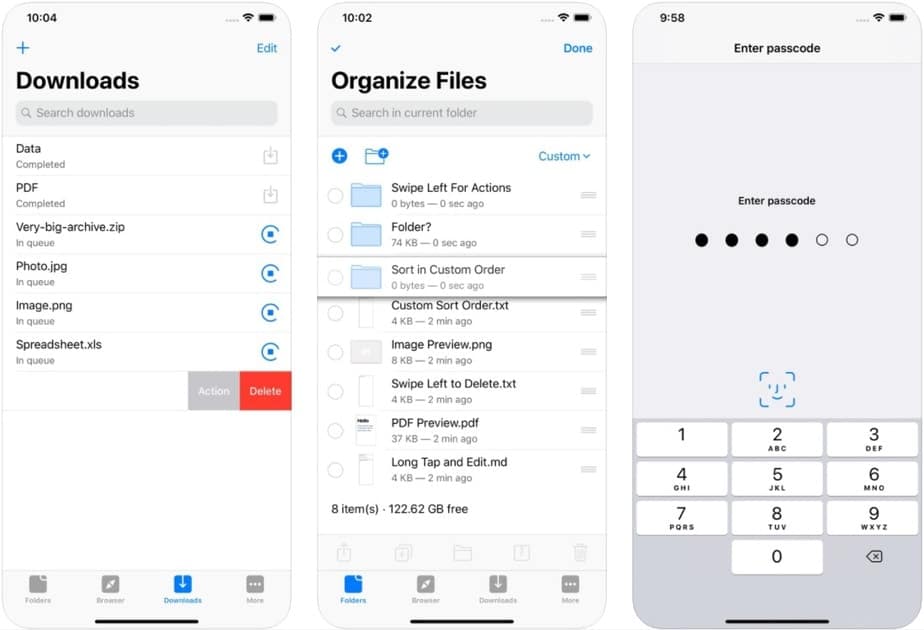 Browser and Documents Manager by Download Apps is similar in look and style to File Manager by Tapmedia. However, this one can import files from other iPhone folders as well as from Camera Roll. But unlike Documents from Readdle and File Hub, users can’t directly save into its sandbox. U has a very bland look that may be intentional to make it look like the replacement for the Files App. A nice touch is that it shows the amount of space left on the phone.

Browser and Documents Manager also has a built-in browser coupled with a VPN service. Also, the main folder can be secured with a passcode, and it has file viewers for the most common file types. Unfortunately, the free version displays an ad every time the main option is tapped, which is quite annoying.

So these are what we think are the best file managers for iPhone. There are plenty of others, but Apple should be stricter in curating file manager apps for the Apple Store as many of them are almost unusable because of intrusive ads. File management is a basic need for an operating system, and users shouldn’t have to go through a ten-second video ad just to see their files. Small banner ads above and below the screen should be enough for that, or ones to unlock special features at least for erstwhile use. Since file management is essential, a few bucks to get rid of ads for those in this list is a worthwhile investment, especially if the app proves useful.