Tracking food intake becomes more important as people grow older. Foods once enjoyed when young could suddenly become taboo when some sort of disease sets in. It’s a sad fact of life. But that doesn’t mean that they cannot be controlled or moderated. Thanks to food tracking apps, counting calories and cholesterol is very much possible now. Enjoying life and staying healthy can be done through exercise and choosing the Best Free Food Tracking Apps for iPhone. 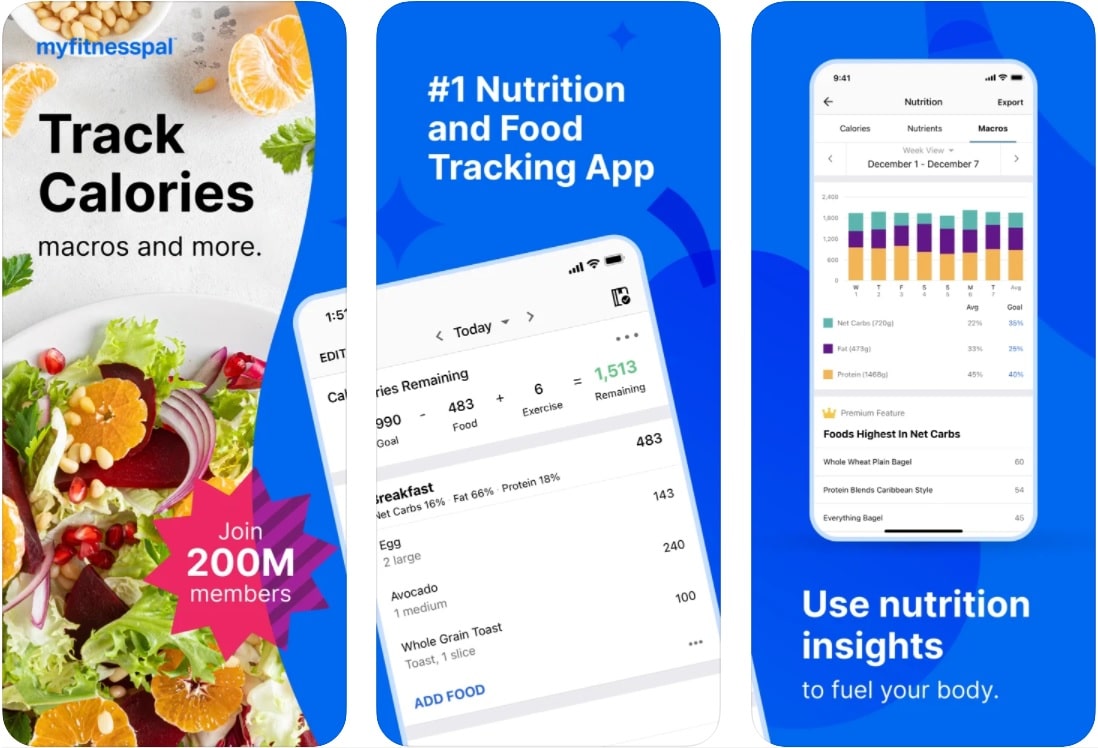 MyFitnessPal is often the first to be recommended when asking for the Food Tracking Apps for iPhone. First, because it’s free. Second because it’s very easy to use. Third, it’s considered the number one Diet and Nutrition app in the US, recognized by GQ, The New York Times, The Wall Street Journal, and The Today Show. And fourth, it has over 14 million foods and brands within its database to help users properly log their food intake. That database comes into play when using the Meal Scan feature, which uses the phone’s camera as a barcode scanner to make food logging much easier when consuming foods with barcodes. Finally, with MyFitnessPal, users are very much not alone in their quest to become healthy or stay healthy, thanks to a community of over 200 million members.

MyFitnessPal can do include log meals and activities, set fitness goals, track progress, learn from fitness experts, maintain users’ inspiration through over 250 healthy recipes and over 150 workouts, and import data from Apple Health. Lastly, its wide community allows strangers to connect and learn through active forums. It may seem overwhelming at first, as fitness trackers are, but the intuitive interface is easy to get used to. However, many features are locked after the 30-day trial but can be brought back for an affordable $50 per year subscription. 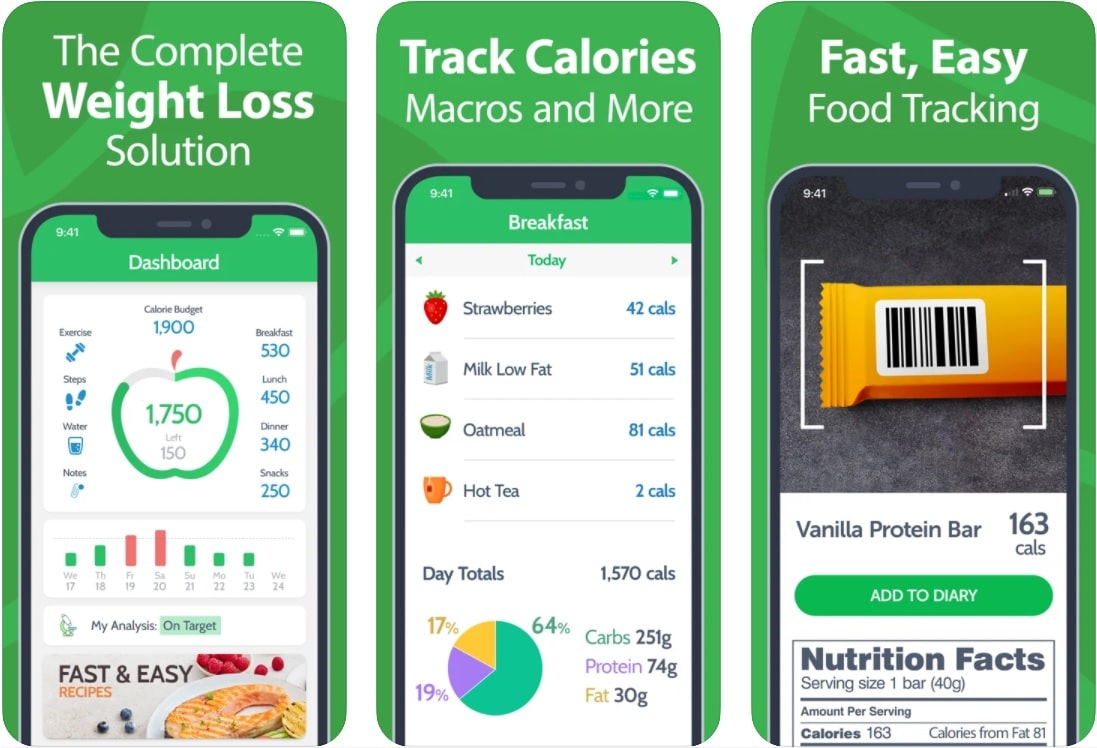 MyNetDiary is another popular free food tracking app. It’s ranked as the number one Best Calorie Counter Apps of 2022 by Forbes Health and the American Journal of Preventive Medicine. MyNetDiary is trusted by over 14 million members, and its food database of over 1.2 million items has been verified by health professionals. What MyNetDiary can do includes exercise tracking with Apple Watch support, providing daily coaching and tips, tracking water intake for proper hydration, meal weigh-in reminders, shopping list for healthier shopping, and providing nutrition articles and how-to videos.

MyNetDiary has a friendly, colorful interface that users can quickly get into. The app can be used for free, with many features limited but sufficient for successful weight loss. Unlocking most features will cost only $60 per year, which is a small price to pay for being fit. 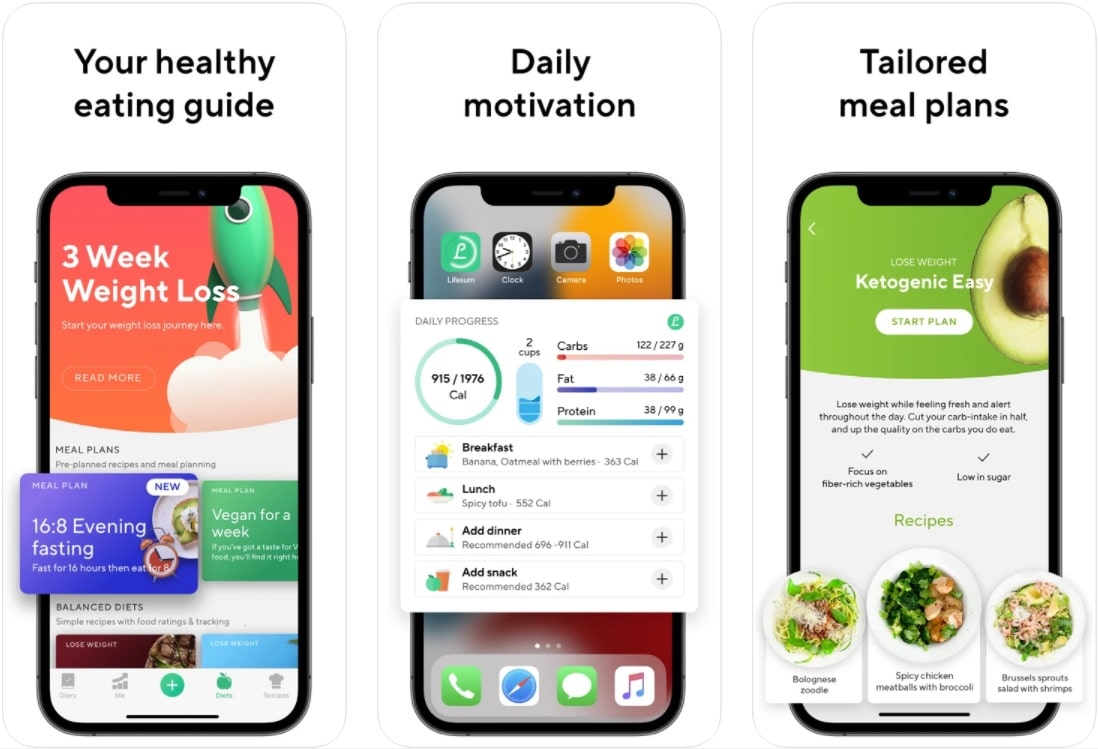 Lifesum is another food tracking app worthy of being in our list of Best Free Food Tracking Apps for iPhone. LifeSum is currently the Apple Store’s Editor’s Choice in the Health and Fitness category. Like MyNetDiary, the UI looks colorful and pleasant and is easy to use. The free version allows users to follow diet recommendations, calorie counting, exercise monitoring, weight tracking, import data from Apple Health, day-by-day rating against set goals, and food tracking via barcode and picture recognition.

LifeSum is free but also has premium subscription tiers of 3, 6, and 12 months which does not demand much commitment, though commitment is necessary when watching calories for those with health issues. This loose approach is acceptable to many, which put membership up to 50 million users, more than double compared to MyNetDiary. The premium version includes features such as various dietary approaches like Keto, Paleo, and exotic dishes, daily recipe suggestions, detailed nutritional information other than calories like sodium, fiber, and potassium, body proportion and BMI tracking, and integration with other fitness apps like Fitbit and Runkeeper. 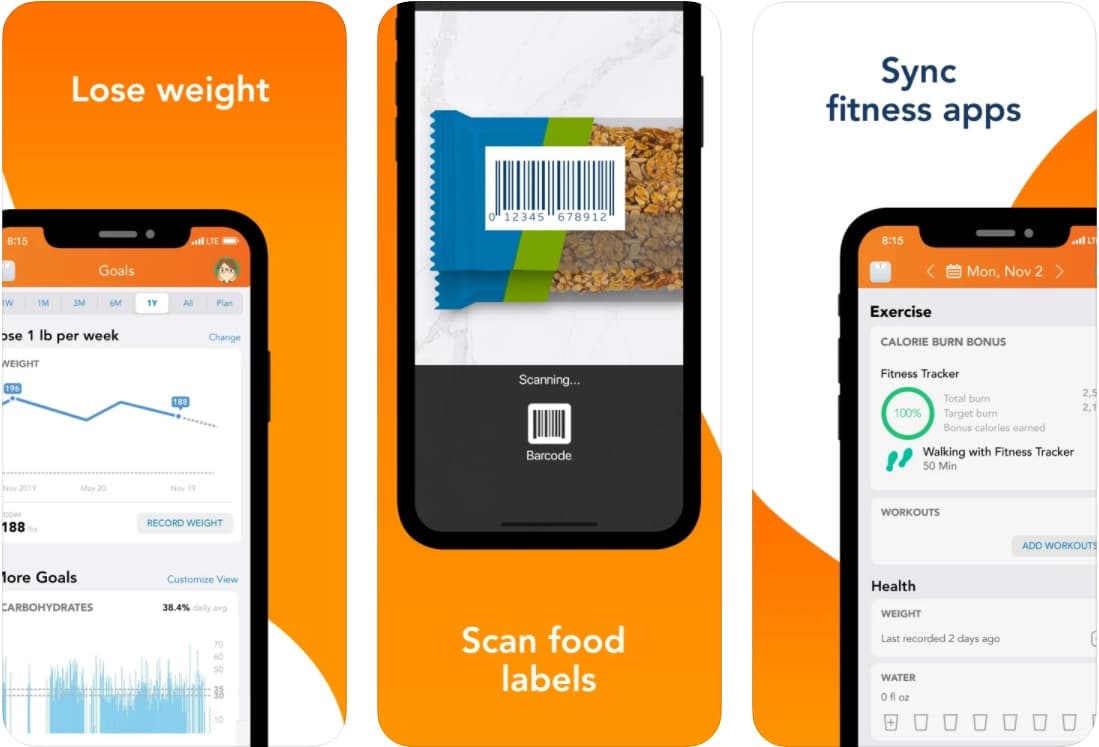 Lose It! is a comprehensive food tracking and weight loss app from publisher FitNow currently ranking high when it comes to Health and Fitness. Like the other entries on this list, this app has been recognized as one of the best by Men’s Health, CNN, Good Morning America, The Today’s Show, and The Wall Street Journal. It’s been around since 2008 and is trusted by over 40 million users.

Lose It! Promises users result in as little as 3 days, thanks to a library of workouts and guides, meal plans and targets, a library of over 27 million food items, integration with many fitness trackers and smart scales, fun diet and workout challenges, DNA insights, and the ability to log food intake via barcode scanner and image recognition.

The app is free to download and also offers in-app purchases in the form of unlocked premium features for $40 per year. As for the UI and usage, it has similarities with MyFitnessPal, but it has theming and personalization which makes users more vested in the app. 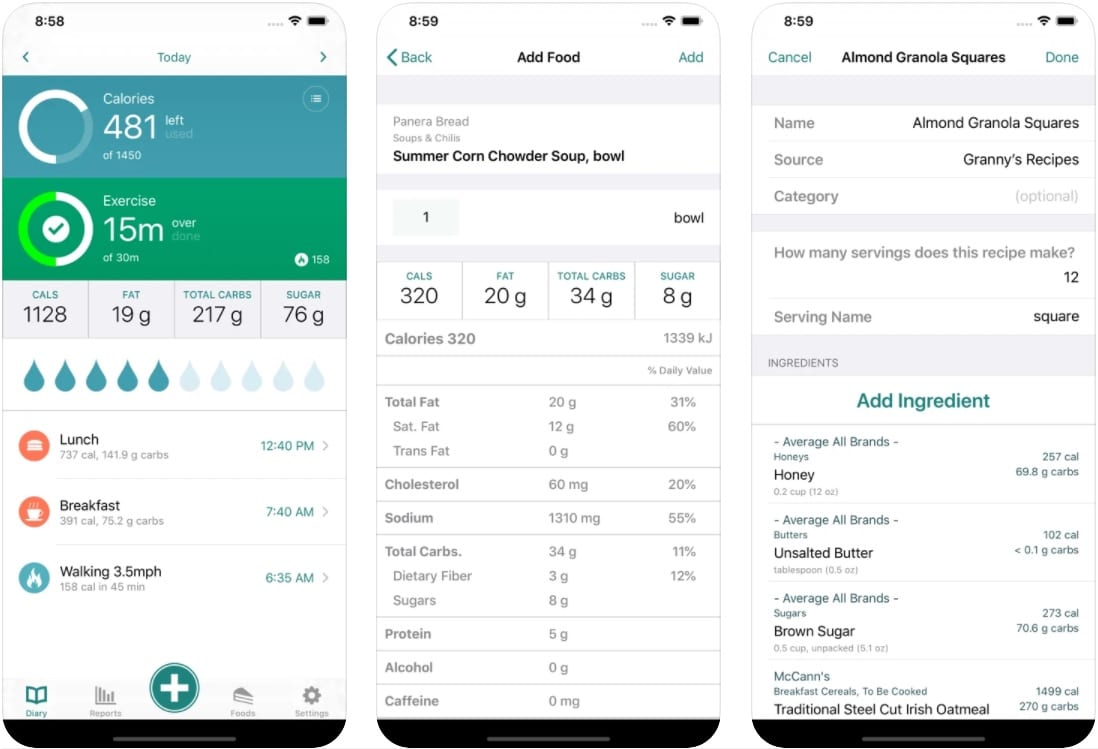 ControlMyWeight is yet another popular food tracking and weight loss app from publisher CalorieKing. Like the rest in this list, it provides weight watchers the basics, such as calorie intake, meal and exercise tracking, motivational charts, and included macro tracking. It also has a barcode scanning ability backed by a comprehensive food database.

ControlMyWeight is a free, ad-supported app. The ads can be a nuisance that takes a bit of momentum out of working out but is quite easy to get rid of for just $14.99 per year, compared to the higher rates of the other apps listed. The UI has a very professional feel. It looks all business but easy to use and displays progress through easy-to-read charts. 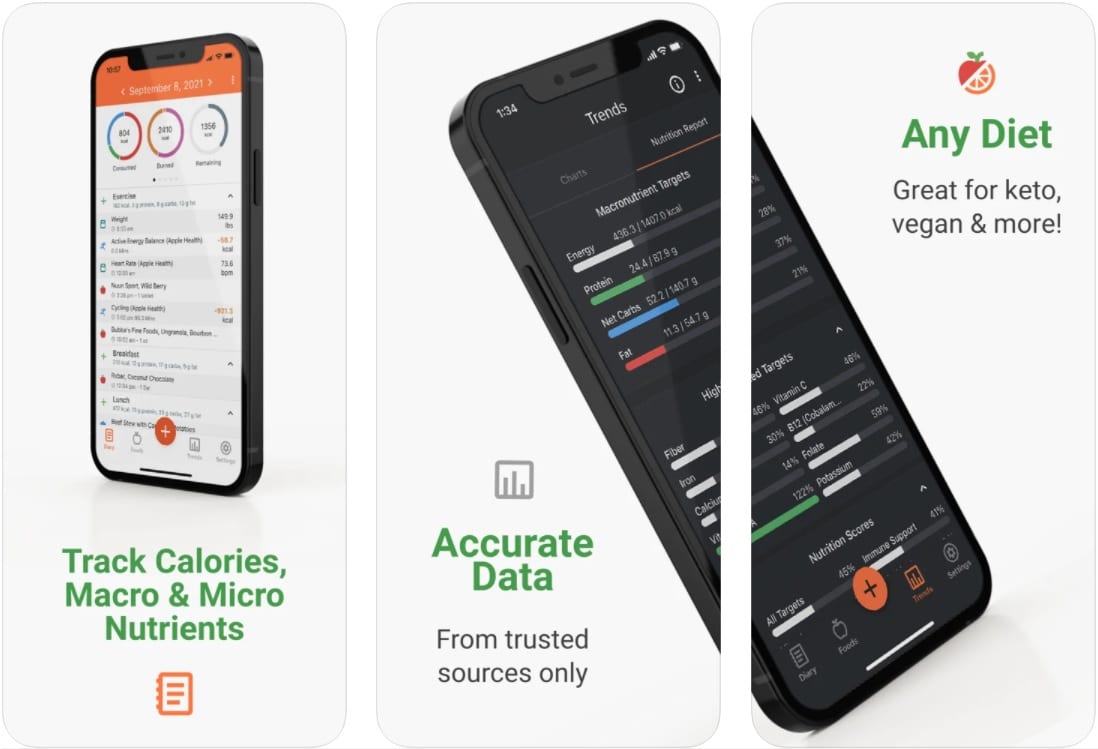 Five million users say Cronometer is worth checking out. First off, its growing food database where users can participate is expertly curated. Second, it doesn’t just track calories, but it can monitor your intake of up to 82 micronutrients. Third, the app is free, sufficient for basic food tracking, and includes food and exercise log, hydration log, barcode scanner, support for various fitness trackers, calorie tracking, protein tracking, cholesterol and card and supplements tracking. The Gold subscription gets these additional features – removal of ads, fasting timer, custom recipes and recipe imports, food suggestions, diary timestamps, custom charts, priority support, and plenty more. The price is comparable with the rest on this list which is $49.99 annually. 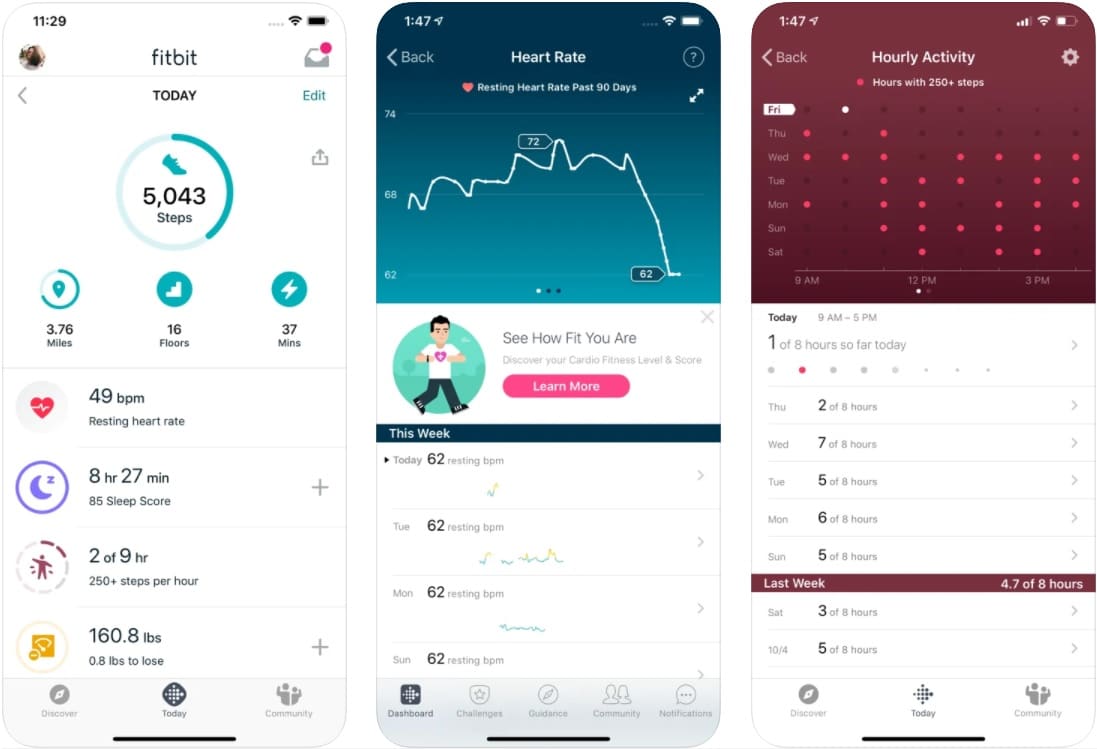 We can’t ignore the app that comes along with a fitness tracker. The Fitbit app doesn’t just track your heart rate, your sleeping pattern, and your workouts, it also tracks your diet. The Fitbit app logs your food and water intake and tracks calories, protein, carbs, and fat. However, it’s not as comprehensive as the other apps listed here unless users subscribe to Fitbit premium, which allows for more personalized nutrition goals. And because the food tracker is just one of the multitude of useful tools FitBit included in the app, the premium would be a little steep which is $79.99 annually, unless there’s a promo. Still, Fitbit can lower their premium a little since they do sell the hardware. 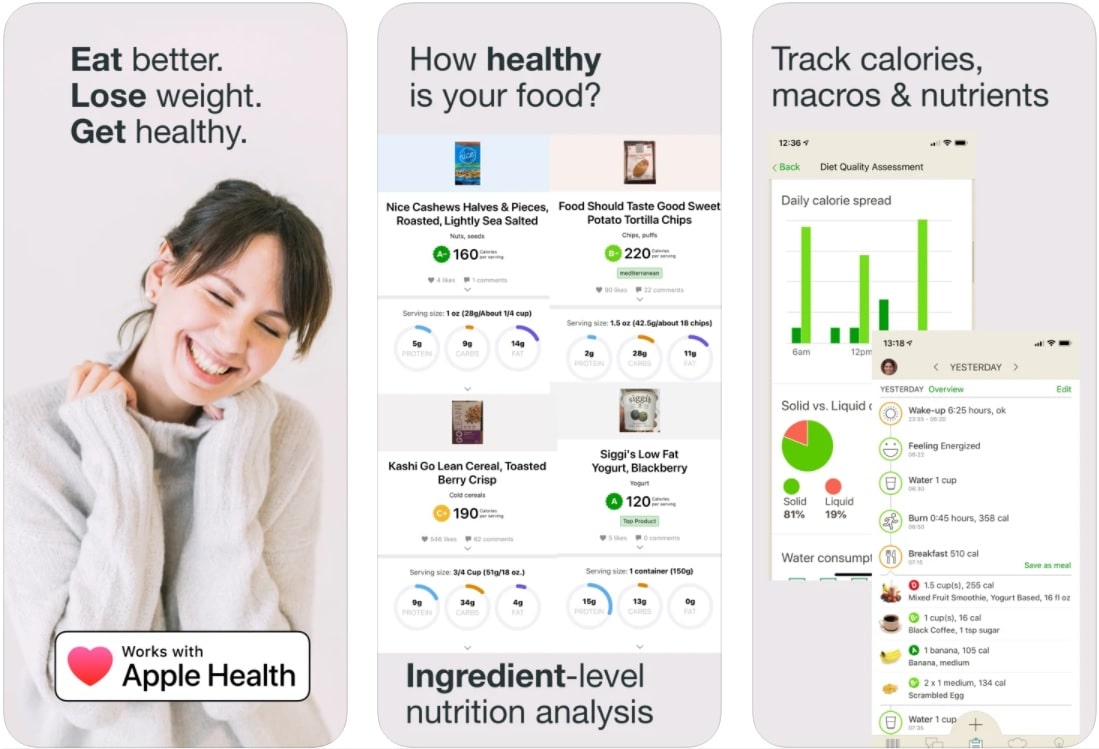 Fooducate is perhaps the most basic and free food tracking app in this list of Best Free Food Tracking Apps for iPhone. Fooducate lets you learn the basics about food, for those worried about their food intake and have little time or are not inclined to exercise. Watching one’s diet still counts, especially for those getting old. Fooducate has been around since 2010 and is trusted by millions of users, notwithstanding the recommendation of dietitians, fitness trainers, and doctors. It’s also been praised by the New York Times, USAToday, Oprah and Dr. Oz and was once Apple’s Best of the iPhone Health & Fitness category.

Features include tracking exercise and food intake, checking the quality of calories, sugar intake analysis, tracking of macros, Apple Health integration, sleep and mood tracking, food product analysis for bad ingredients, an extensive food database, and health and diet tips from professionals. That’s a lot for the basics. The Pro version, which is a steal compared to the others, removes ads, supports custom diets such as keto, vegan, and paleo, health considerations such as food allergies, and chronic diseases such as diabetes. If you want to become an expert on your own diet and become healthy, Fooducate is perfect. 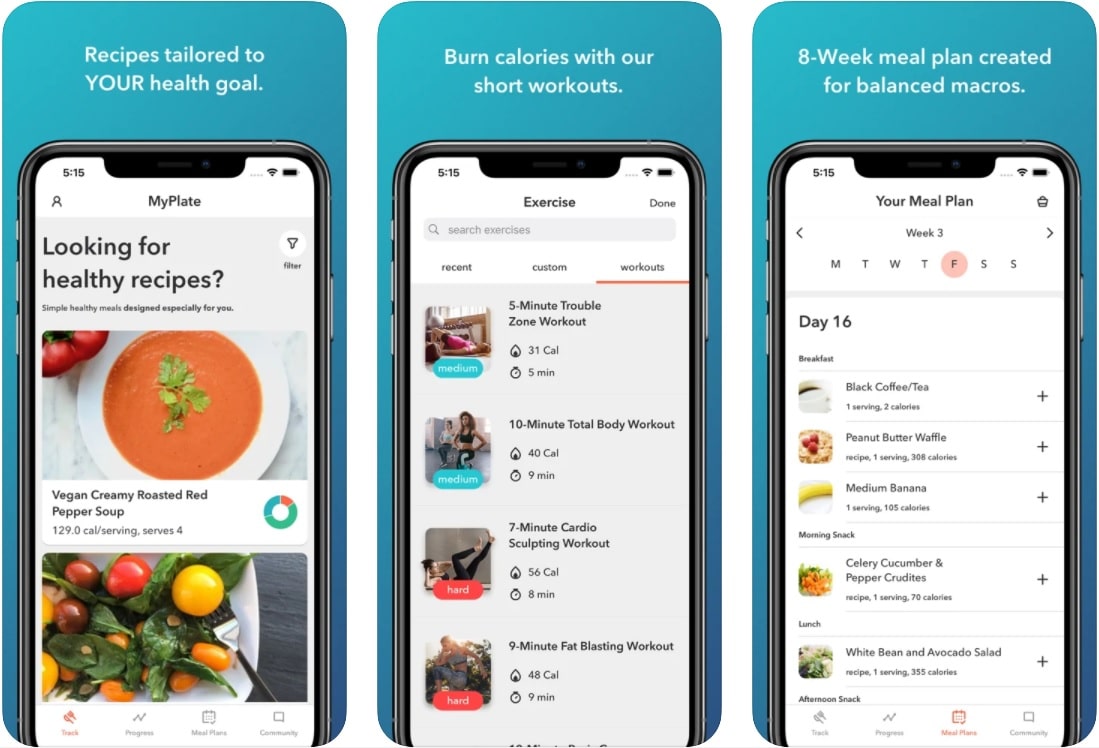 Last but not least is MyPlate – another popular app for calorie counters. For those who don’t know where to start or are undecided on what plan to follow, MyPlate has an 8-week meal plan that provides users with healthy meal suggestions for eight weeks, which caters to various dietary needs preferences, like vegan, omnivore, and gluten-free.MyPlate makes it easy to track not just calories but macronutrients as well. Tracking them is made easy, thanks to a huge food database of over 2 million foods. Logging is made easy with a barcode scanner. There’s also a workout guide, meal reminders, and hydration tracker. Like most in this list, MyPlate is free to use but with ads. A premium tier removes the ads and adds more features. Membership is flexible, which can be monthly or annually.

We hope you like these recommendations for the Best Free Food Tracking Apps for iPhone. Stay safe, live healthy, and may any of these work out for you.