Java is a fairly popular programming language, and many popular platforms such as Instagram, Google, Uber, Airbnb, and Netflix use Java in their platforms. It’s also beginners friendly, which is the reason why most experts recommend programmers to start their journey by learning Java. So, if you are also a beginner Java Programmer and want some apps to learn and practice Java on your smartphone, this guide is for you. In this guide, we will share the top 10 best Java programming apps for Android in 2022. Let’s get started. 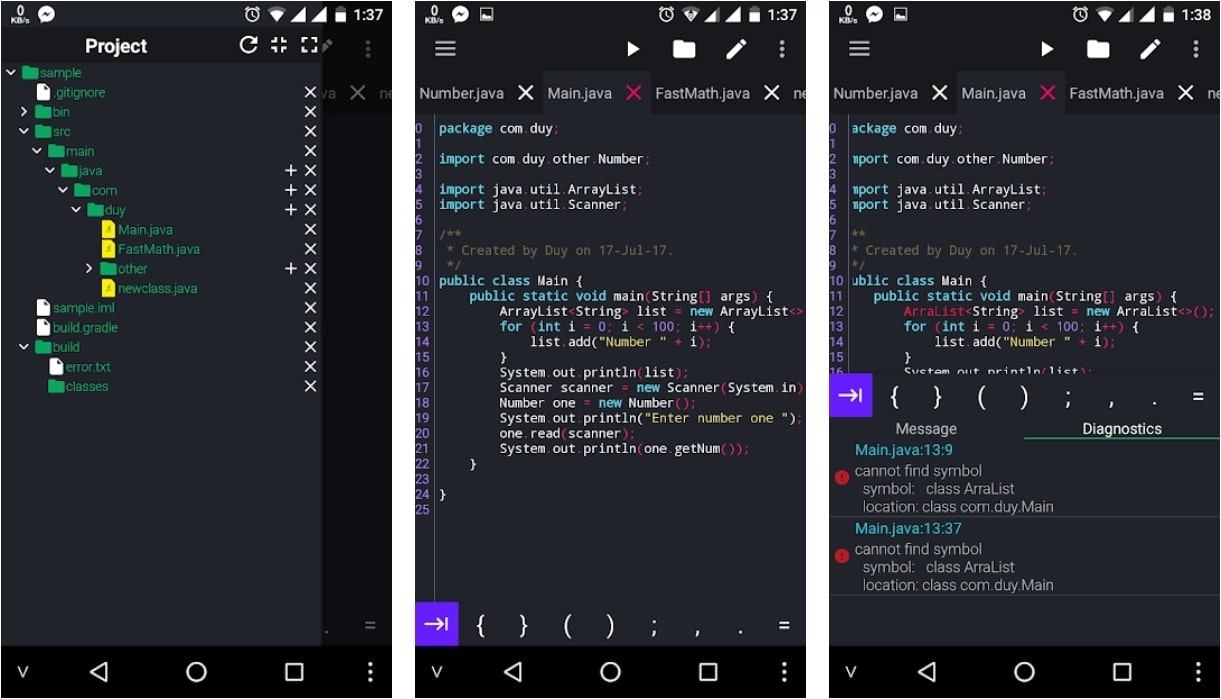 Let’s start with Java N-IDE, which is arguably one of the most popular Java programming apps for Android in 2022. It’s a full-fledged offline java compiler that you can use to run java code directly from your smartphone. In Java N-IDE, you get a lot of promising features, and one of the best features of this app is auto-complete which automatically completes the java code you write. On top of that, the app also comes with various java tutorials, which is very useful for beginners, and it allows them to test various java programs directly on their device. So, overall, if you want a java programming app with great tutorials, Java N-IDE is an excellent option for you. 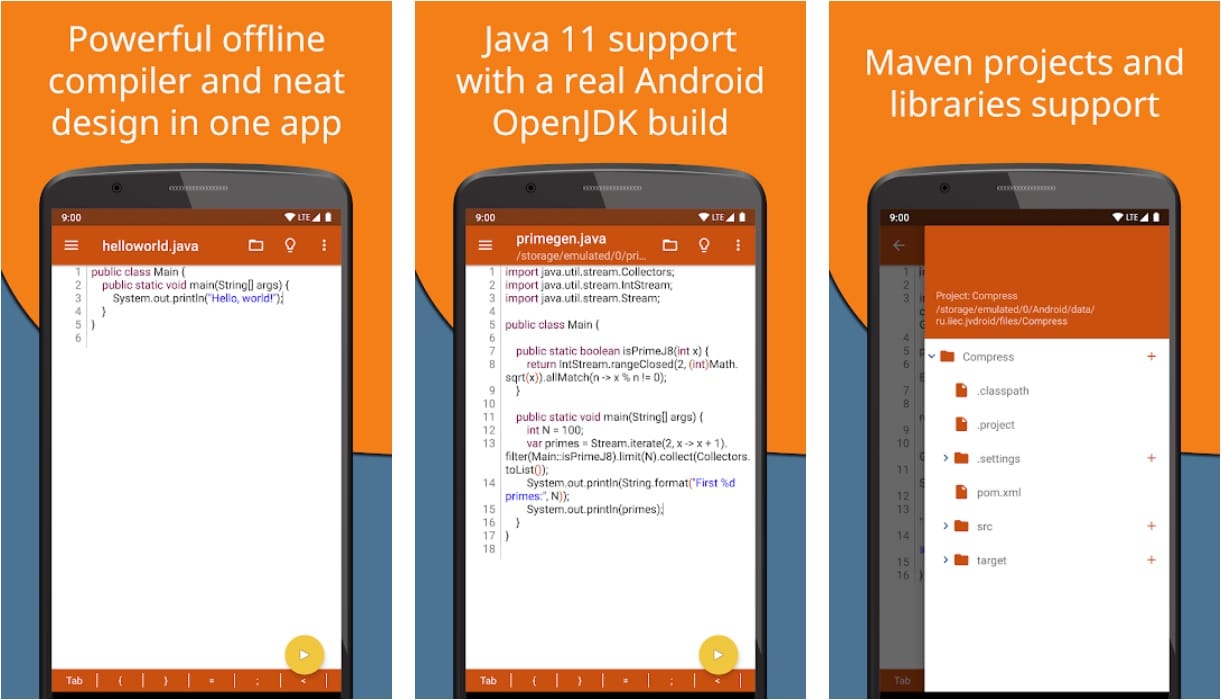 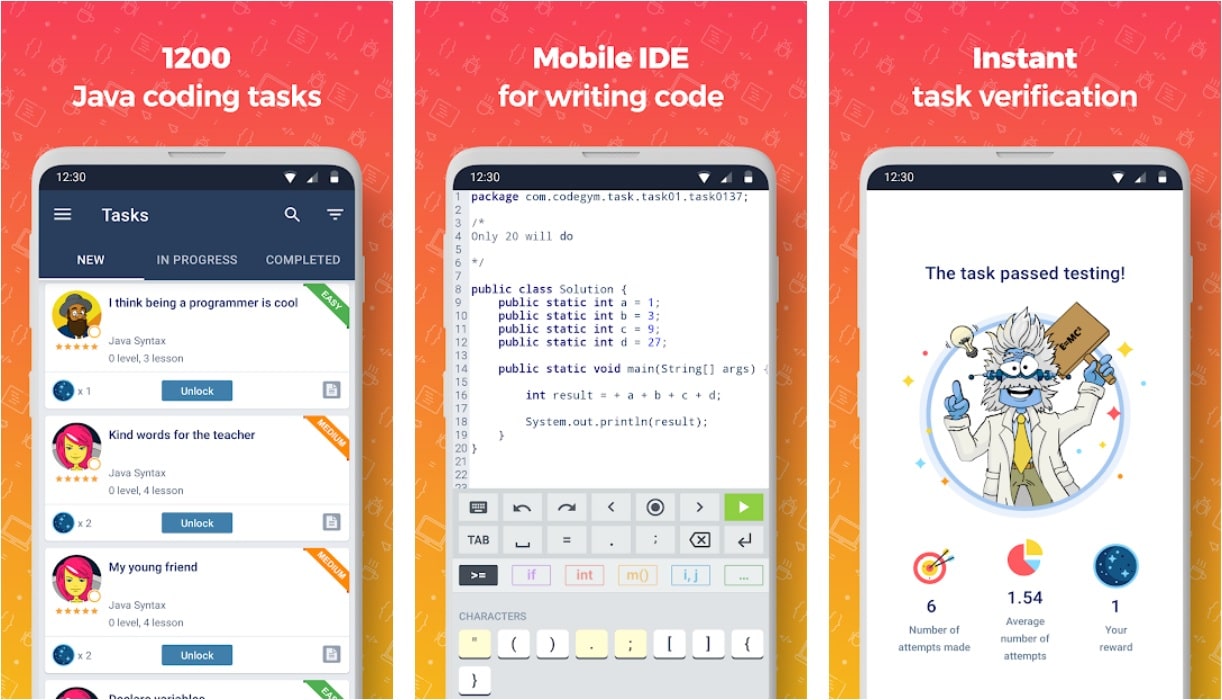 CodeGym is one of the best java programming apps for Android in 2022. It’s basically a learning app that allows you to learn java programming language from scratch. In CodeGym, you get access to over 1200 tasks and over 600 java mini-lectures, which will help you learn various concepts of Java and improve your skills. The thing which we liked the most about CodeGym is that it offers short tasks which allow beginners to complete them with ease and allow them to learn core java programming concepts without making them complex. So, if you are a beginner and want to improve your grasp of Java, CodeGym is an ideal option for you. 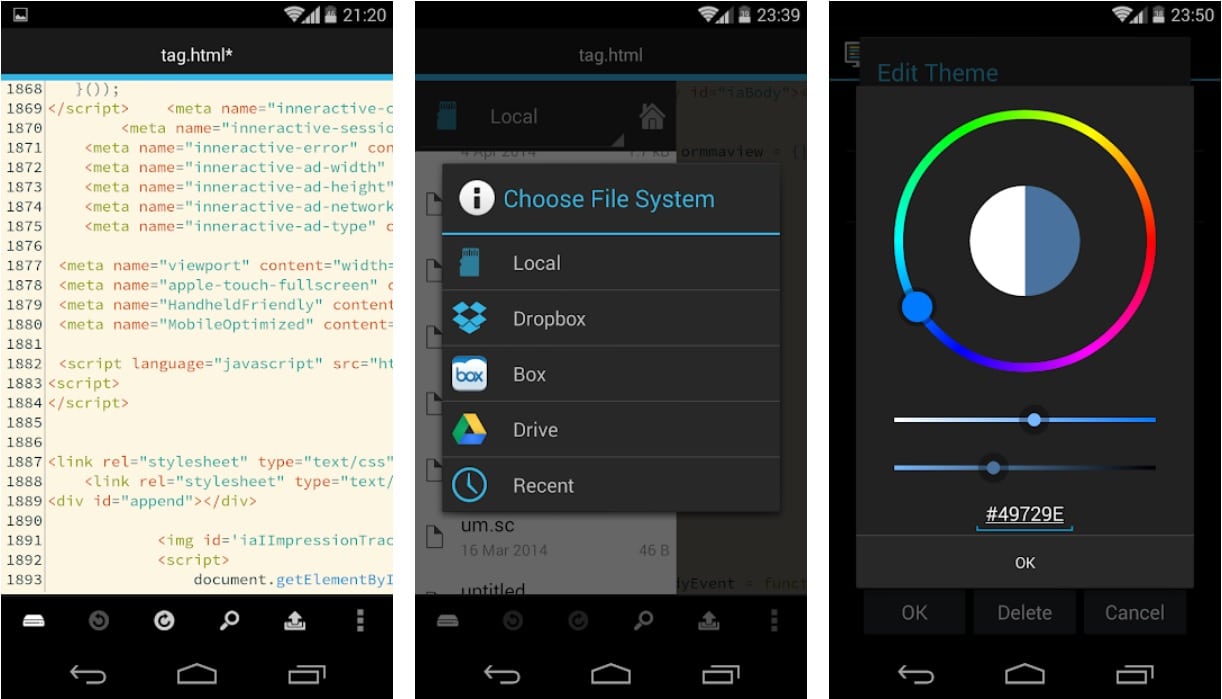 DroidEdit is one of the best code editors for Android in 2022. The unique thing about this editor is that it supports a variety of programming languages, including Java, JavaScript, Python, Ruby, C++, and others. On top of that, it also provides syntax highlighting features for all apps, which makes it easier for programmers to code. In the app, you also get a variety of color themes which you can pick depending on your requirement. If we look at the coding-related features, it comes with features such as auto & block indentation, searches and replaces, keyboard shortcuts, character encoding support, and bracket matching. Overall, if you are looking for a powerful java programming app for Android, DroidEdit is a great option. 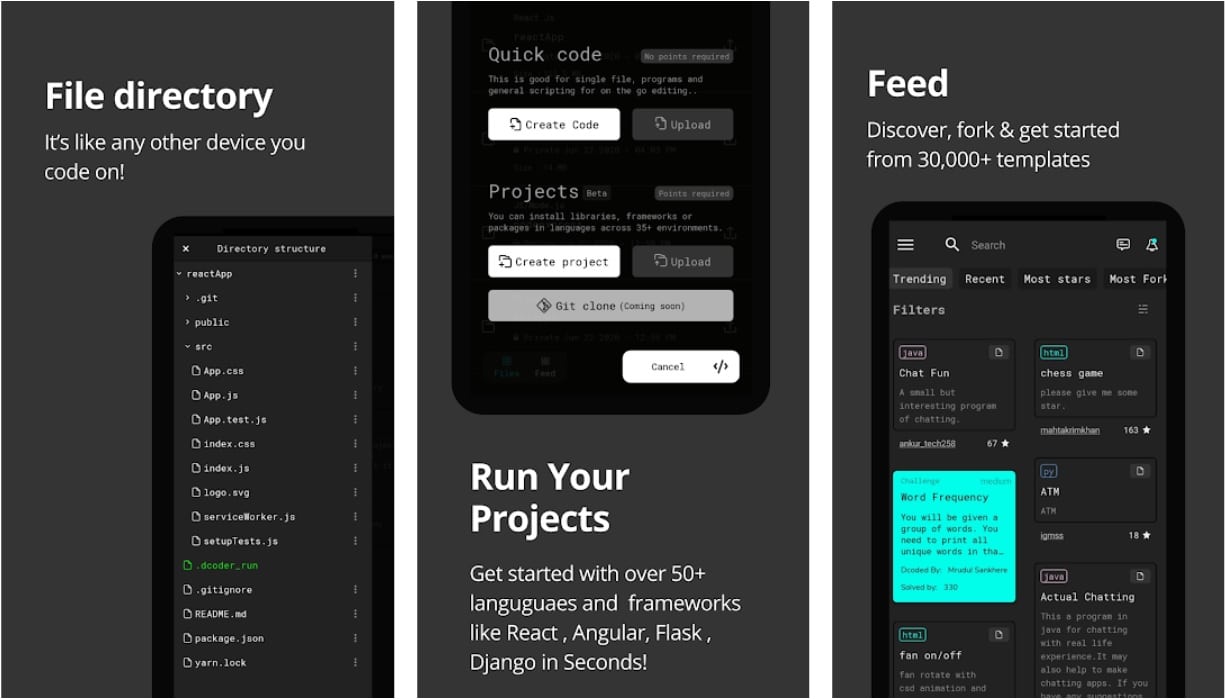 Dcoder is arguably one of the most comprehensive Java programming apps for Android in 2022. The unique thing about Dcoder is that it supports over a dozen programming languages and frameworks along with Java. In Dcoder, you can easily work with a number of programming languages, including Java, C++, Php, Python, Objective-C, Ruby, Go, Scala, Perl, Pascal, Swift, Kotlin, Haskell, and others. When it comes to frameworks, Dcoder works well with Angular, React, Django, Flask, Flutter, and Ruby on Rails. On top of that, you can also integrate it with Git platforms such as GitHub and Bitbucket, which will allow you to make contributions to your code repositories directly from your smartphone. Overall, if you want a powerful programming app with multiple programming languages support, you can’t go wrong with Dcoder. 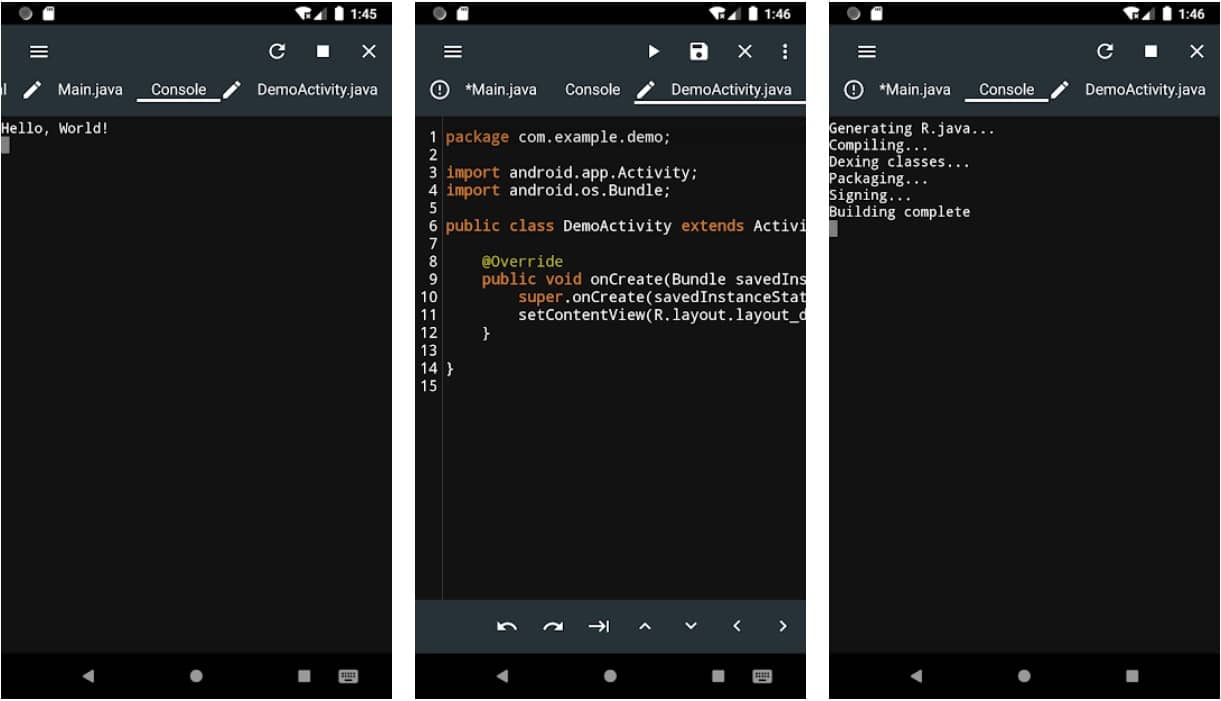 JStudio is a dedicated IDE that you can use for developing Java programs and Android apps directly from your Android smartphone. The unique thing about JStudio is that it comes with a real-time error checking feature, which allows you to find errors in your code in real-time, and you can fix them easily. This feature is pretty rare among mobile IDEs, but JStudio is one of the very few programming apps that have this feature.

If we look at the features, JStudio also comes with an auto-completion feature which will surely save a lot of your time. Also, it comes with an auto-backup feature, which will allow the app to save the code automatically, and even if you leave the app, your code will stay safe. Another nifty feature of JStudio is the built-in terminal which you can use to execute Android-related commands directly from the app. It also allows you to manage your java files directly from the app, and you can easily copy/paste/delete them. Overall, if you want a java programming app for Android with a real-time error checking feature, JStudio is a solid option for you. 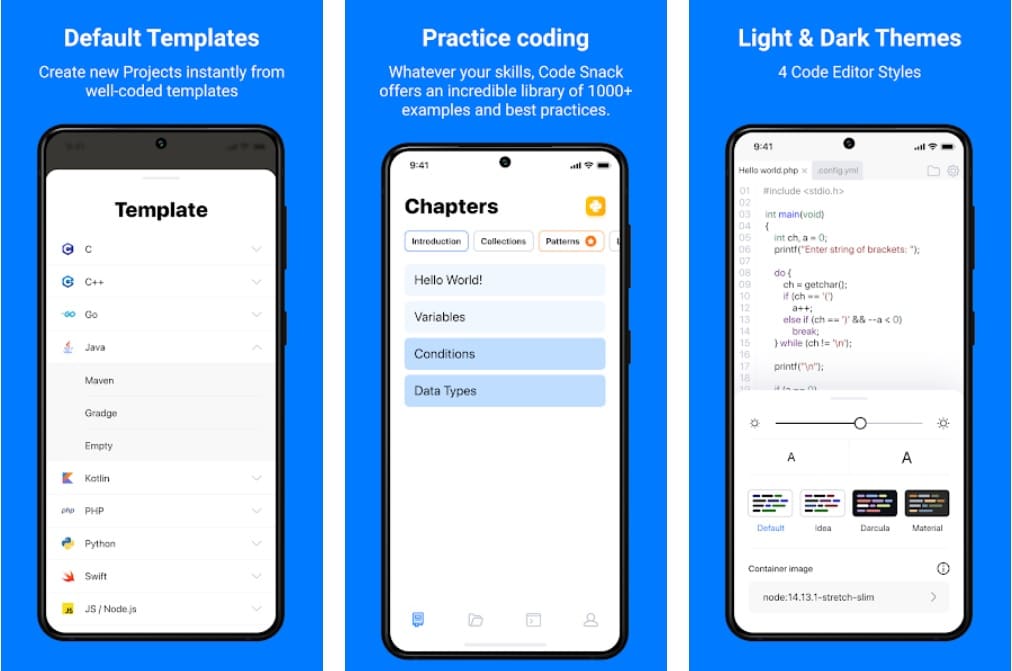 CodeSnack IDE is another very promising java programming app that allows you to compile and run java programs directly from your Android smartphone. The unique thing about CodeSnack is that it supports various programming languages, including Java, Python, Dart, PHP, JavaScript, C#, and others. On top of that, it also comes with intelligent coding features such as autocompletion and linting, which help the coders to write code efficiently. Also, it allows you to install the required dependencies using Linux Terminal easily.

When it comes to debugging, the app offers comprehensive program output and shows the error logs in real-time, which you can use to remove bugs from your code. Another great thing about CodeSnack is that it comes with a library of over 1000 examples. So, if you are a beginner, you can use these examples to learn and improve your programming skills. Overall, if you want a powerful IDE app for Android, CodeSnack is a great option. 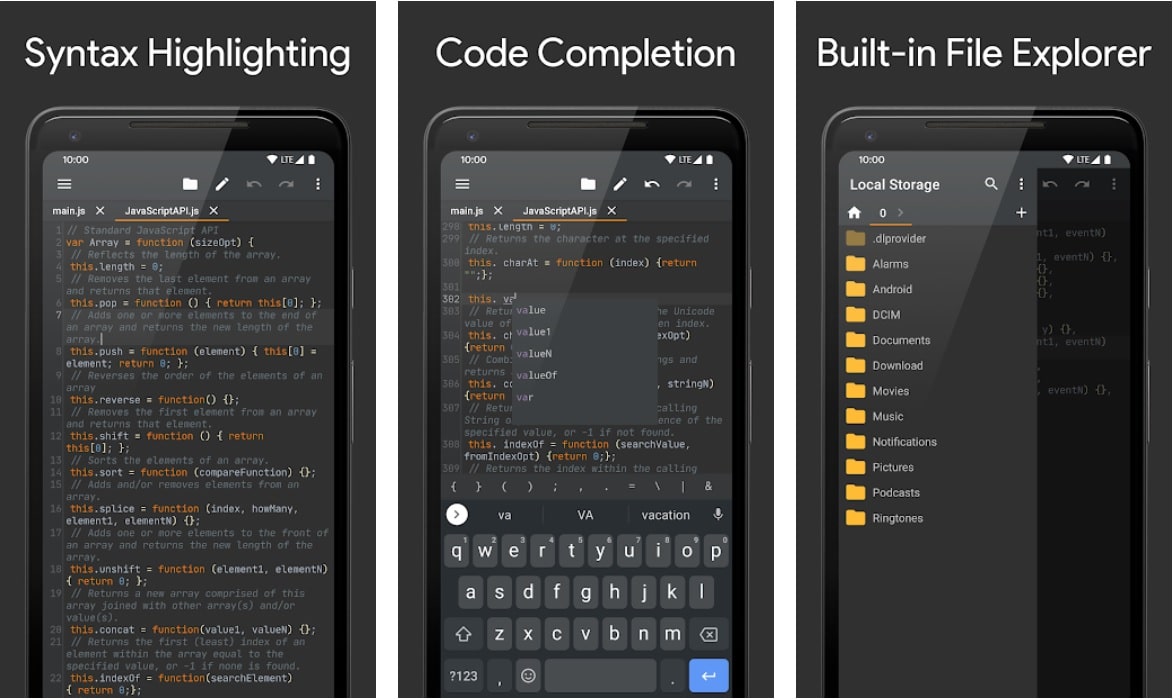 Squircle is another very reliable java programming app that you can use to edit and run Java programs on your Android smartphone. Like any good code editor, Squircle also comes with a syntax highlighting feature, which makes it easier for a coder to read the code. On top of that, it also comes with a code completion feature, which makes it easier to write code, especially for beginners. Also, it automatically indents lines, open/close brackets, quotes, and braces, which reduce the chances of making these types of mistakes which is pretty common in programming. Another great thing about Squircle is that it supports various programming languages, including Java, Groovy, C++, C#, Kotlin, Lua, Markdown, Php, Python, and others. Overall, if you want a lightweight java programming app for Android, Squircle is a great option for you. 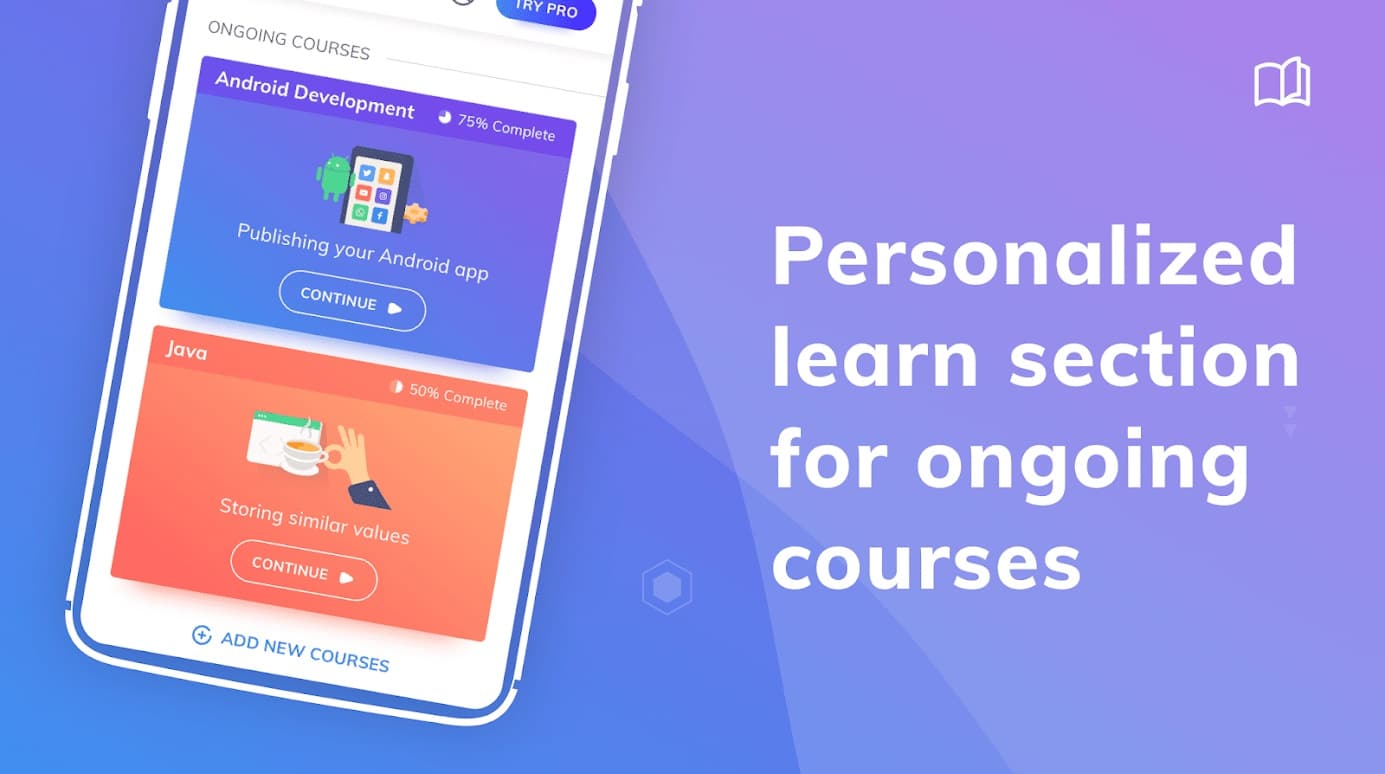 Programming Hub is one of the best java programming apps for Android in 2022. It’s a learning app that you can use to learn various programming languages, including Java, JavaScript, Python. Swift, C, and R. The best thing about the Programming app is that it comes with over 5000 programs that will help you learn the basic concepts of Java and other programming languages. In the app, you also get an effective compiler that you can use to write code and improve your grasp. Overall, if you are a beginner and want to learn Java, Programming Hub is an ideal app for you. 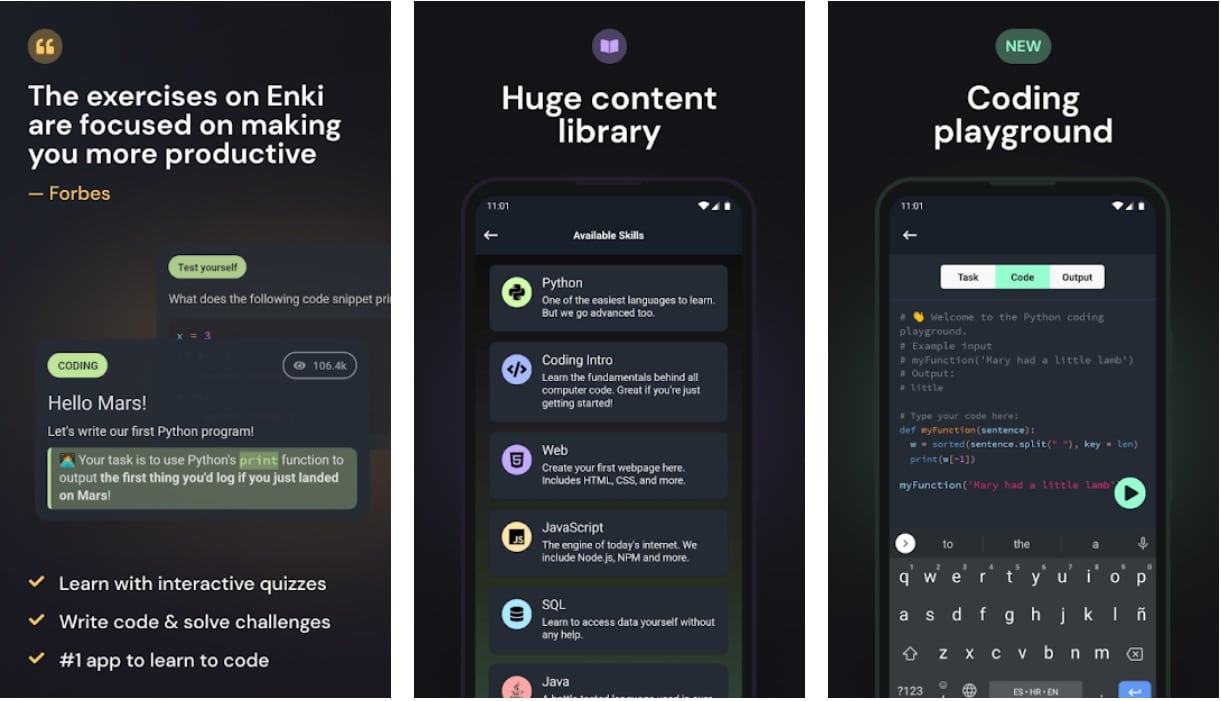 Enki is another very impressive programming app that you can use to learn Java and other related programming skills. The unique thing about Enki is that it uses a scientifically proven interactive method that will help you learn and retain your coding skills. In the app, you can learn various programming languages, including Java, JavaScript, SQL, Python, and more. On top of that, it also provides lessons about the latest and hot programming skills such as Blockchain and MongoDB, which you won’t find on many programming apps out there.

In Enki, you also get the coding playground where you can basically apply your knowledge and see if your programs are working. Also, the app has a very vibrant community where you can interact with other programmers and learn. Overall, if you want a comprehensive programming app to learn Java and other related programming skills, Enki is a solid option for you.

That’s all, folks! In this guide, we have shared the best Java programming apps for Android. We also have shared some Java learning apps which you can use to learn Java and other related skills. Good Luck!

If you are a beginner, Enki is our top recommendation. In this app, you can learn Java concepts and apply your knowledge directly in the app.

☞ What’s the most powerful Java IDE for Android?

Dcoder and DroidEdit are two of the most powerful Java IDEs for Android. Both IDEs offer tons of features that allow the coders to edit and run their code directly from the smartphone.