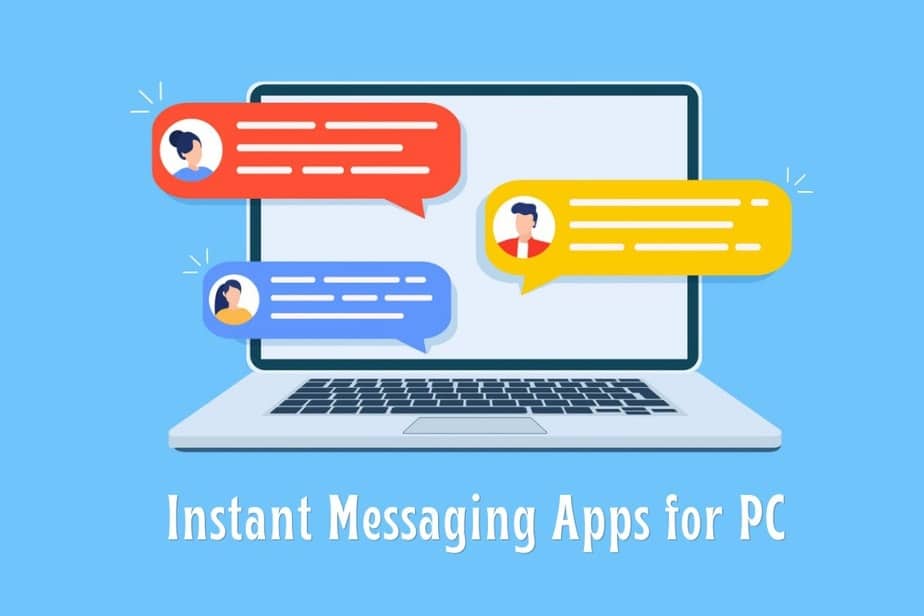 Instant messenger is a convenient way to connect with people in real-time. There are a lot of good messaging apps to choose from, but in this article, we’ve narrowed it down to the ones that are fully featured and can run on your Windows desktop or laptop. Instant messaging can help you save time, and it’s capable of sending messages at any time from any location.

People frequently send and receive messages from friends and family, and they want to protect their privacy so that no one can access their private information. These messengers have end-to-end encryption with no data leaks and are totally free of intrusive ads.

So, let’s take a look at some of the best instant messaging apps for PC that will meet your texting standards.

WhatsApp is the most famous messenger on the planet with hundreds of millions of users every day. It’s also the best instant messaging app for PC, which does not require any third-party app to be installed. The app also helps you synchronize all your chat messages from your device to your computer.

WhatsApp messages are protected by end-to-end encryption, which provides you with better security when chatting, and no one will be able to read your data, as it claims.

Signal, which was developed by the Signal Foundation, is one of the most popular private messaging apps. It does not contain any annoying ads. Its primary objective is to increase security and privacy. Dark mode and disappearing messages are two of the more fascinating features you’ll find. A PC version was also developed by the signal team.

Millions of WhatsApp users switched to another messaging app after the company announced its new privacy policy. They find Signal to be more fascinating and stable than WhatsApp.

Viber is yet another fantastic messenger software for PC, which allows you to make HD video and audio calls. It has disappearing chat features that add value, and you can set a time limit after which the messenger will automatically delete messages. It also supports group chats so you can talk to multiple people at once. Use the most up-to-date stickers and GIFs to share your feelings with others. And as the majority of people are concerned about their privacy, Viber will protect your conversations by end-to-end encryption.

Telegram is one of the most common instant messaging apps with millions of users. It is best known for its strong privacy policies, which keep your messages and calls private. The app has a private chat feature, which ensures complete anonymity when chatting. Others on the list cast doubt on Telegram’s claims of being able to keep user’s communications completely confidential.

Discord is dedicated to assisting users in coordinating and communicating through private servers. The app is a beautifully designed application with comprehensive chat support and a built-in Streamer mode.

Unlike other common messaging apps for PC, you only need to build one username to join multiple servers at the same time. There’s no need to build different work and personal logins because the same one is used in these networks.

WeChat is a free instant messaging app for PC that makes it easy to stay in touch with friends and family. It’s an all-in-one messaging app that includes free text, audio, and video calls, as well as moments, picture sharing, and games.

Google Hangouts seem to be in line with Google’s tradition of keeping things easy. It is yet another great instant messaging app for Windows 10 or other computers. The app has a simple interface and is pretty intuitive, so even if you’ve never used it before, you’ll quickly find out how to send messages or start a video call. Hangouts is a great choice for simple chatting, but it can lag especially in group video calls.

Skype, which was first launched in August 2003, is one of the oldest instant messaging and video calling applications. Millions of business organizations use Skype to organize meetings and train employees.

Skype has a number of useful features that other instant messaging apps lack, such as the ability to share your screen with others, the ability to have private conversations so that no one can monitor you, it also has end-to-end encryption. It is a great interactive tool because it records calls and has live subtitles.

Slack is a channel-based instant messaging app. With Slack, people can collaborate more easily, link all of their tech resources and services, and find the knowledge they need to do their best work while remaining safe and secure in an enterprise-grade environment.

Team members use Slack to send messages and exchange files in channels. Create channels for your team, and everything else that’s relevant to your company. You can also make channels private for conversations that should not be open to all members from your own workspace.