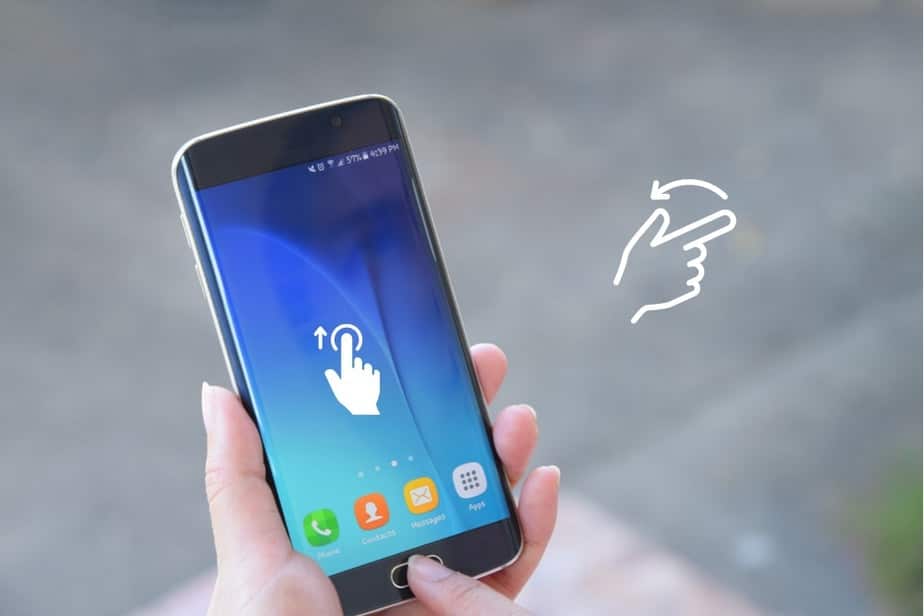 Phones used to have plenty of keys to activate certain functions and apps. However, since the iPhone X, we’re left with only the power and volume keys and a big slab of the screen because all other Android phones followed suit. As a result, users are left only with swipes and taps to get where they want. Unique gestures to navigate the phone or activate a specific app or function would be nice. Good thing we now have navigation gesture apps for Android phones.

Google introduced cool gesture navigation beginning with Android Pie which unfortunately leaves out users with older Android versions. The good thing is that third-party developers are there to fill that gap and provide their own navigation gesture apps to give users the same or even better experiences, even on newer phones. Another reason for gesture apps is for users to migrate the gestures they’re used to on other phone models to maintain familiarity and not have to change the way they use their phones every time they purchase different phone models.

Here are the top 10 best navigation gesture apps for Android. Note that most of these apps will require some tweaking in the accessibility settings, and some might require root access to be truly effective. 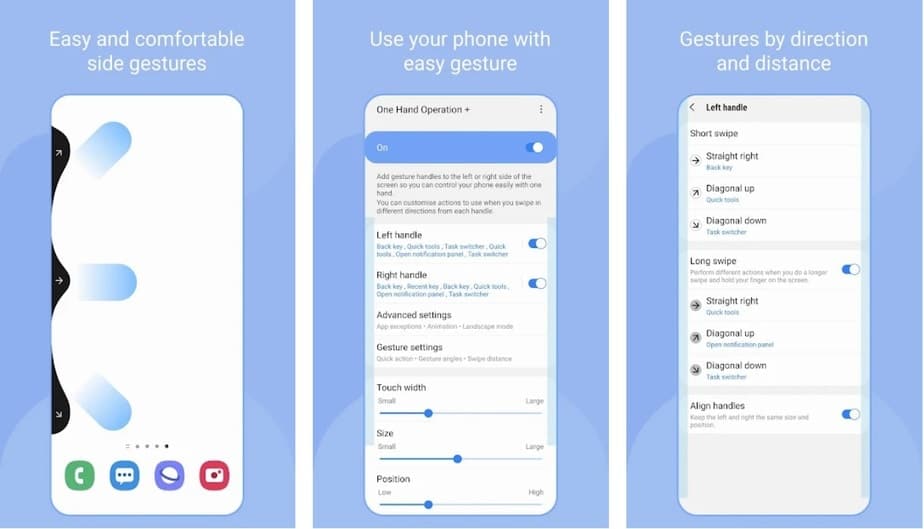 One Hand Operation+ is from Samsung Electronics, the leader in following iPhone’s lead, and other Android phone makers follow suit. While sizes of phones may have increased, there are still users who prefer to use their phones with one hand. Being able to do so is essential for busy individuals and old-schoolers used to controlling their phones with one hand, meaning the thumb does all the gesturing. One Hand Operation+ is an excellent navigation gesture app for such users.

First, it allows for left or right-hand operation, so lefties aren’t left out. Once activated, the screen displays faint lines on either side of the screen that the thumb can gesture in any direction. The app is highly customizable and easy to use. It would certainly give one-hand users as well as casual users a better Android experience not just for Samsung devices but also for others. 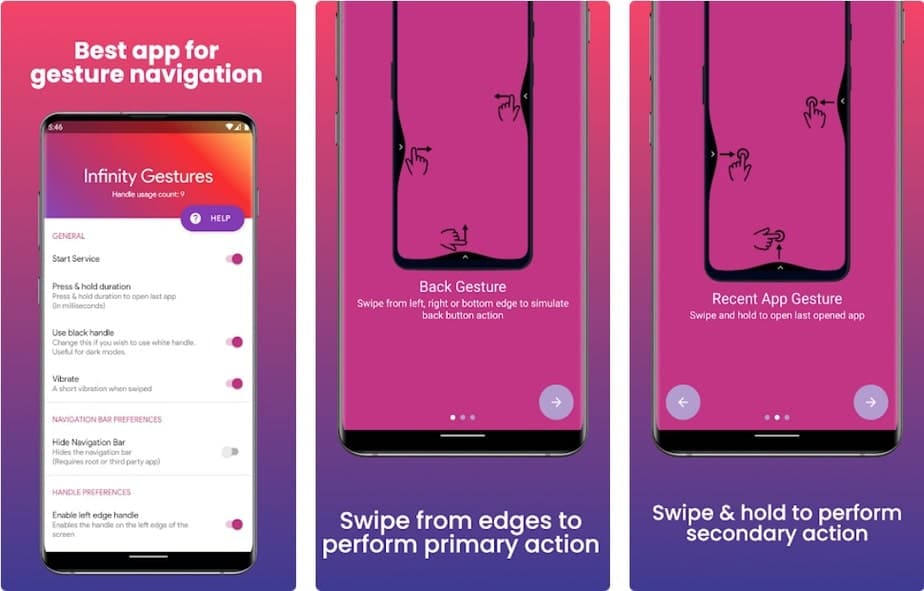 Infinity Gestures is another good navigation gesture app from (sic) App’ostrophe Tech. For fans of Xiaomi’s MIUI 10 gestures, Infinity Gestures brings the same experience to other phone brands. Its configuration screen is very simple and straightforward, allowing users to set up and customize gestures for important phone functions. When running, the screen initially doesn’t show any indication until the user performs a gesture. After that, indicators show up on the screen edges, which look cool and fluid. You’ll find plenty of positive reviews on the Playstore, but be wary that not all phones may be compatible. 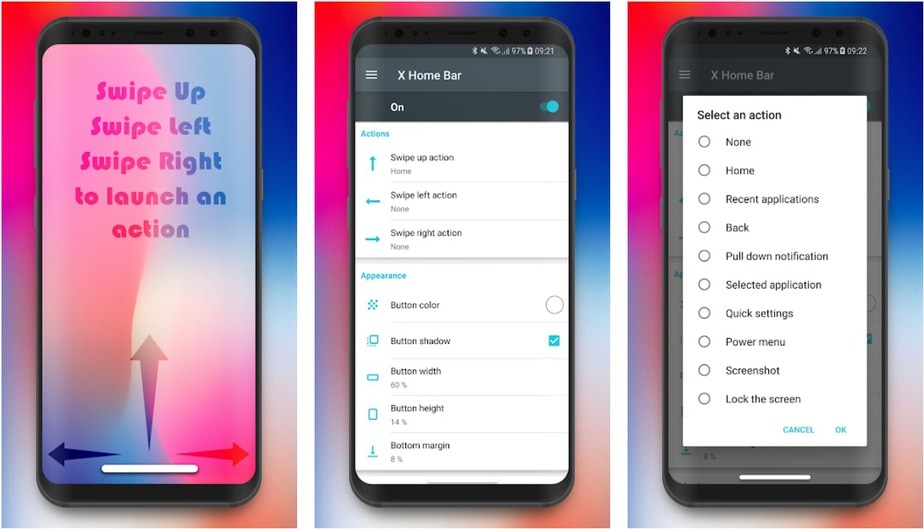 X Home Bar is a free gesture app from developer Sylvain Lagache that simulates the iPhone X experience. This would be perfect for those shifting away from Apple to Android or having both phones and want a consistent UI experience. When activated, a small pill appears at the bottom of the screen, similar to an iPhone. Configuration is pretty straightforward. Users can customize the actions or simply mimic the iPhone. This app comes in free and premium versions, which has more features and ensures there won’t be any ads. Mostly positive reviews as well. 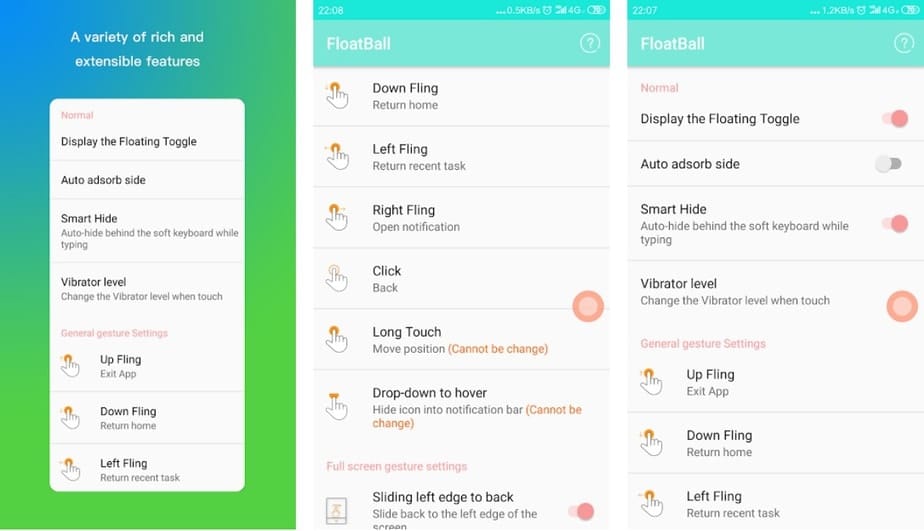 GestureBall is a navigation gesture app from Droid3 Tech that brings the Xiaomi gesture experience to other Android phones. While the other entries take advantage of the phone’s edges, the Xiaomi gestures take advantage of the full screen. Users can swipe from the edges or directionally fling their fingers within the screen. These gestures are customizable in an easy and intuitive configuration screen. And as the name implies, a float ball appears on the screen when the app is activated, similar to the Assistivetouch feature of iPhones. 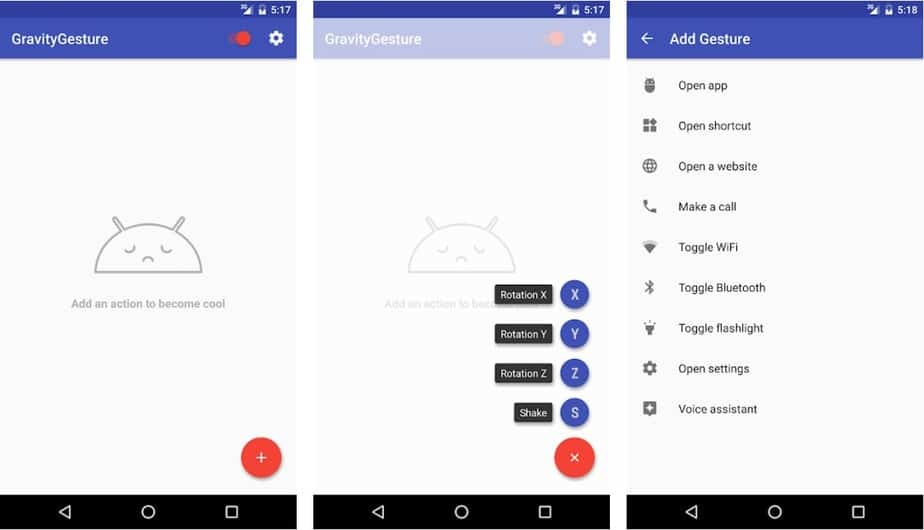 Motorola’s series of phones have their own spin on gesture navigation. Although Motorola phones aren’t quite mainstream, there are users who appreciate their take on gesture control, and many others might find it too. Gravity Gestures is a free app from TinoooApp makes that Moto gesture navigation experience available to other users.

Gravity Getsures app makes use of the phone’s accelerometer to activate apps and phone features, such as tilting, rotating the phone, and shaking. For example, tilting the phone downwards can activate the flashlight, or tilting the phone sidewards can open the calendar. The actions are easily configurable on the settings screen. This app, however, may not work reliably on all phone models or may depend on the accelerometer’s sensitivity. Because it depends on just the accelerometer, this can be used with the other gesture apps on this list. 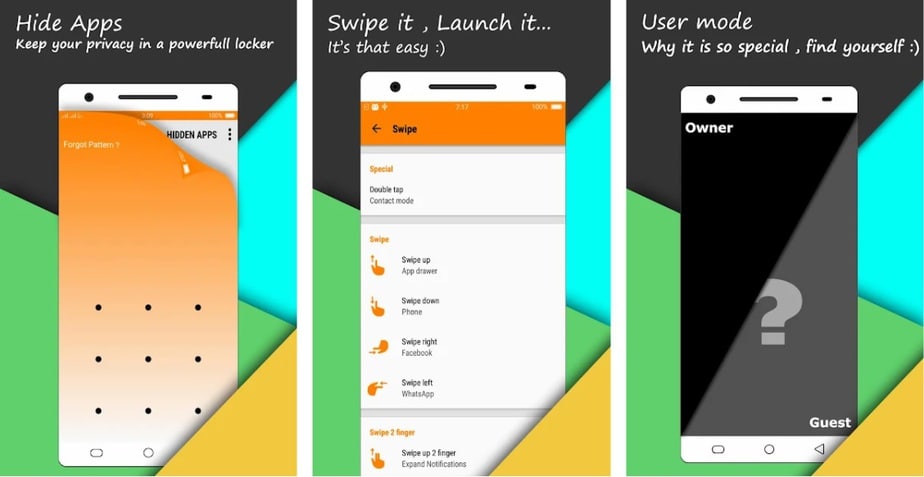 AUG Launcher from G K R is basically a whole new launcher, not just a navigation gesture app. AUG Launcher is a highly customizable app that allows users to access phone functions, launch apps, and call specific contacts using certain gestures. However, this forces the user to depart from whatever launcher they’re using to take advantage of the gestures.

The launcher itself is highly flexible and integrated. For example, AUG Launcher has its own lock screen, can change the wallpaper, lockout apps, and control certain settings. The app also supports multiple finger gestures, which make it highly flexible. Plus, there are no ads. Some features are locked until users purchase the full version. But custom launchers are just as close to the chest for Android users, so AUG Launcher would be best for users who don’t mind switching. 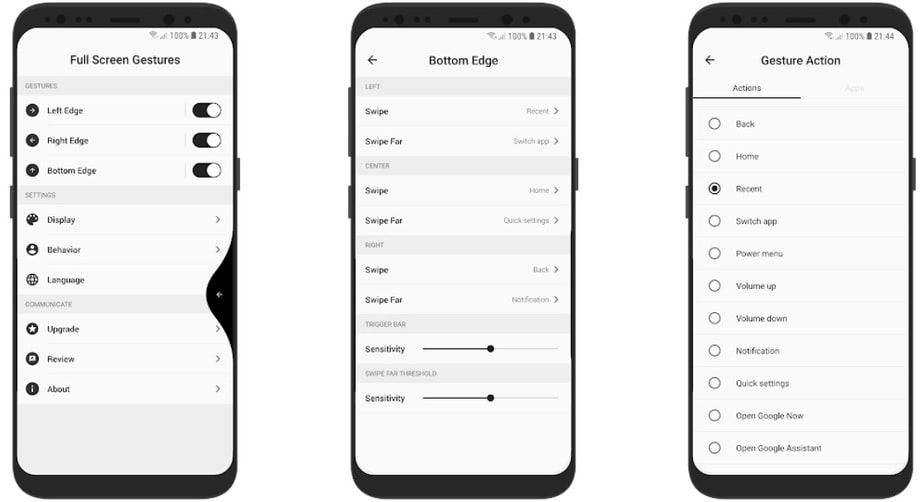 Full Screen Gestures from Risebrice also mimics Apple’s gesture navigation control. The pill, however, doesn’t appear at the bottom. This gesture app supports both near and far screen swipes as well as settings for screen size and pressure sensitivity. This app makes it onto this list for its majority of good reviews for being quick and responsive. Like many gesture apps listed here, the configuration is easy and straightforward. This app contains ads unless satisfied users care to purchase the ad-free option. More features can be added through in-app purchases. 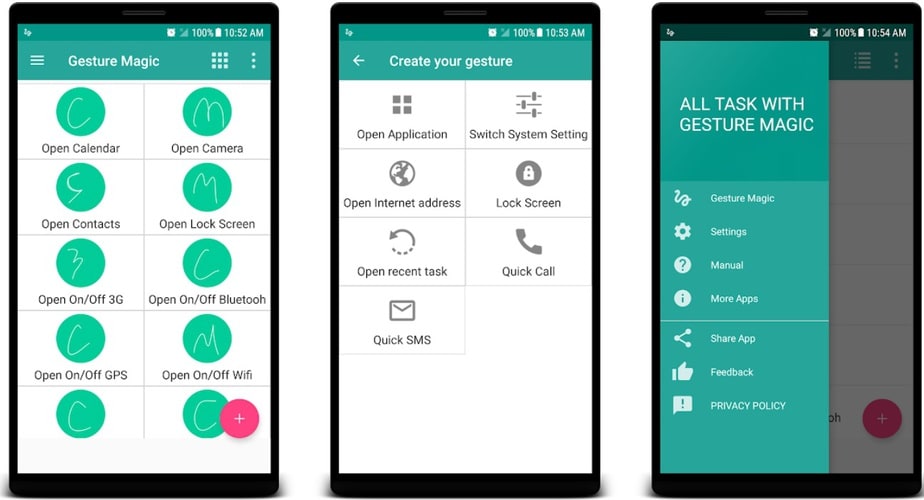 Among the navigation gesture apps listed here, Gesture Magic is one of the most flexible. This app from Apps2All allows users to create custom gestures to activate various apps and phone functions. No more fumbling around for apps and folders on the home screen. In the settings, users can ‘write’ certain gestures, let’s say, to open Facebook, make calls, send texts, or open websites. If there aren’t any issues, Gesture Magic would be truly convenient. And, like Gesture Ball, Gesture Magic also has a floating AssistiveTouch button to help with a few things.

The high flexibility though has a price. The downside to the free version of this app is the appearance of ads. But if you’re satisfied with how things work, the app deserves a few bucks, and you’ll be free from the ads and the confines of the phone’s limited gestures. 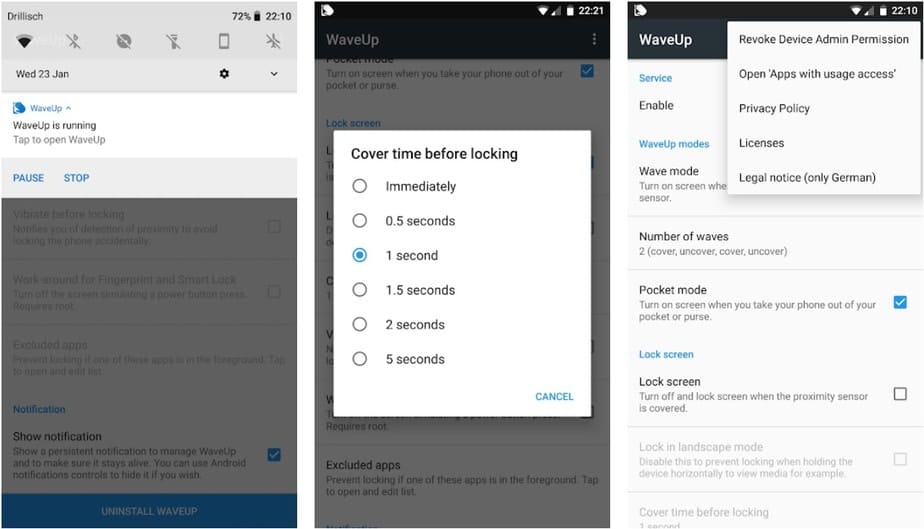 WaveUP is from the developer juanitobananas, who wanted the ability to avoid using the Power button just to look at the time. Apparently, either the pick-up feature wasn’t created yet or wasn’t available on his phone. And though there are other apps with the same functionality, being a developer, he wanted to make his own improved version, which made it onto this list of the top 10 navigation gesture apps.

WaveUp is basically a true gesture navigation app as the hand just needs to make gestures without touching the phone by taking advantage of its proximity sensor if it has one. So lower-end phones may have no luck here. The developer’s premise actually avoids wearing down the power button, which is quite common. Currently, the app doesn’t do much other than turn the screen on and off. Every little thing helps, though WaveUp can be used along with the other gesture apps here. Also, WaveUp tends to stop when the phone’s battery optimization kicks in or may stop altogether depending on the phone model. 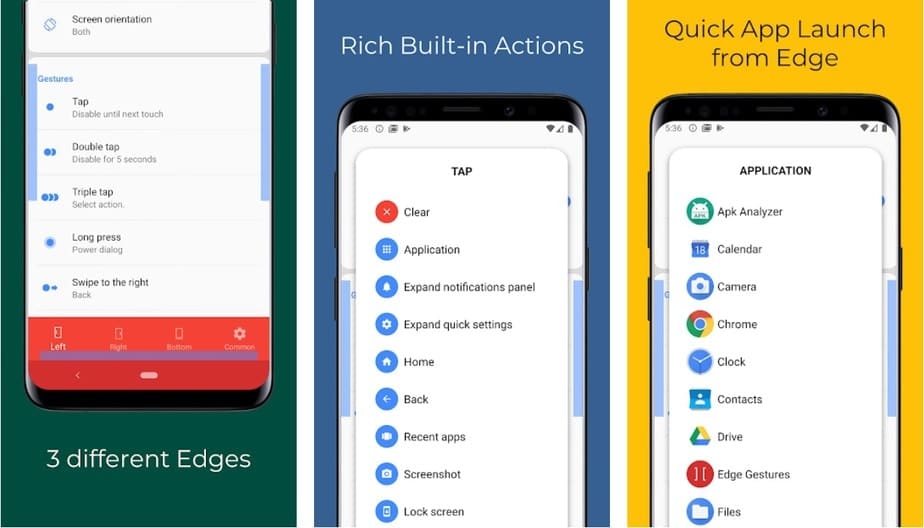 Edge Gestures from ‘ChYK the dev’ is unlike the other gesture apps available here. Edge Gestures is a fully paid but fully featured gesture navigation app. Similar to some of the apps listed here, it takes advantage of the three edges of the phone for gesture control; bottom, left, and right. And, like most of the other apps here, setup is also easy and intuitive.

Edge Gestures makes use of the following gesture types, tap, double-tap, long-press, swipe, swipe and hold, and pie controls to quickly launch commonly used apps. Once on, faint edge controls appear on the phone’s edges, though the size and opacity can be customized. Out of the box, there are already plenty of functions to choose from, but there are plenty more once these gestures are customized.

Many of these apps here are in active development, so the developers might come up with new features with continued support. But what’s important is for your gadgets to be in your control and not the other way around.