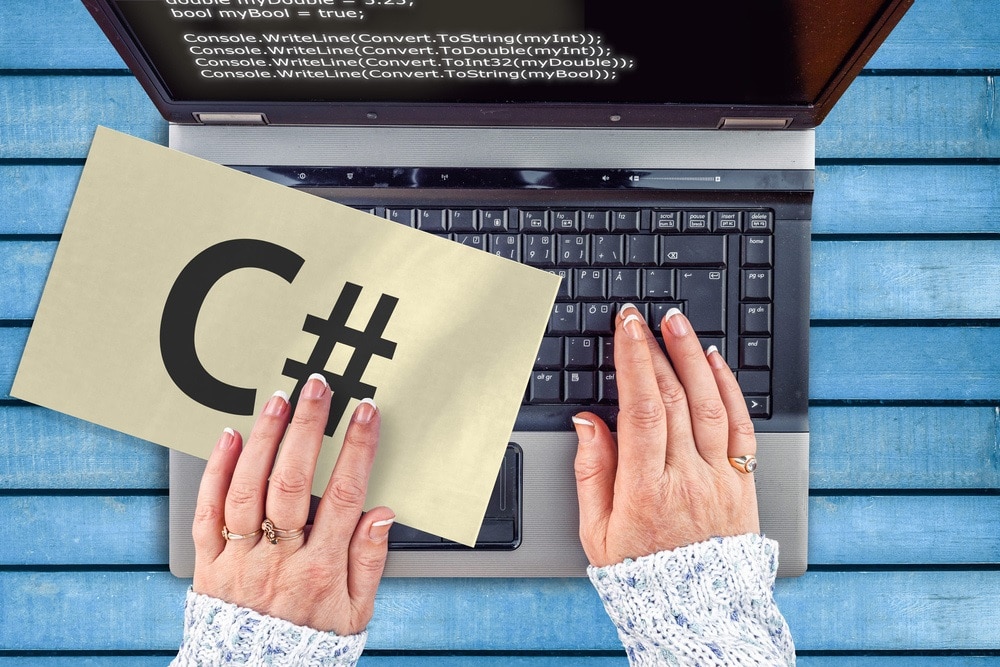 C# is considered to be the leader among programming languages. It is preferred by most because its composition resembles that of human language. It is the main technology used in developing desktop applications for Microsoft systems.

The syntax of C# is consist of compiled languages. Users need compilers to assemble source code into intermediate language. This is made so that the codes will be implemented to various targets successfully.

There are generally two types of compilers, online and offline. Although they both perform at the same level, online compilers are more convenient to use than offline compilers. C# online compilers do not require installation and are accessible anywhere and anytime. 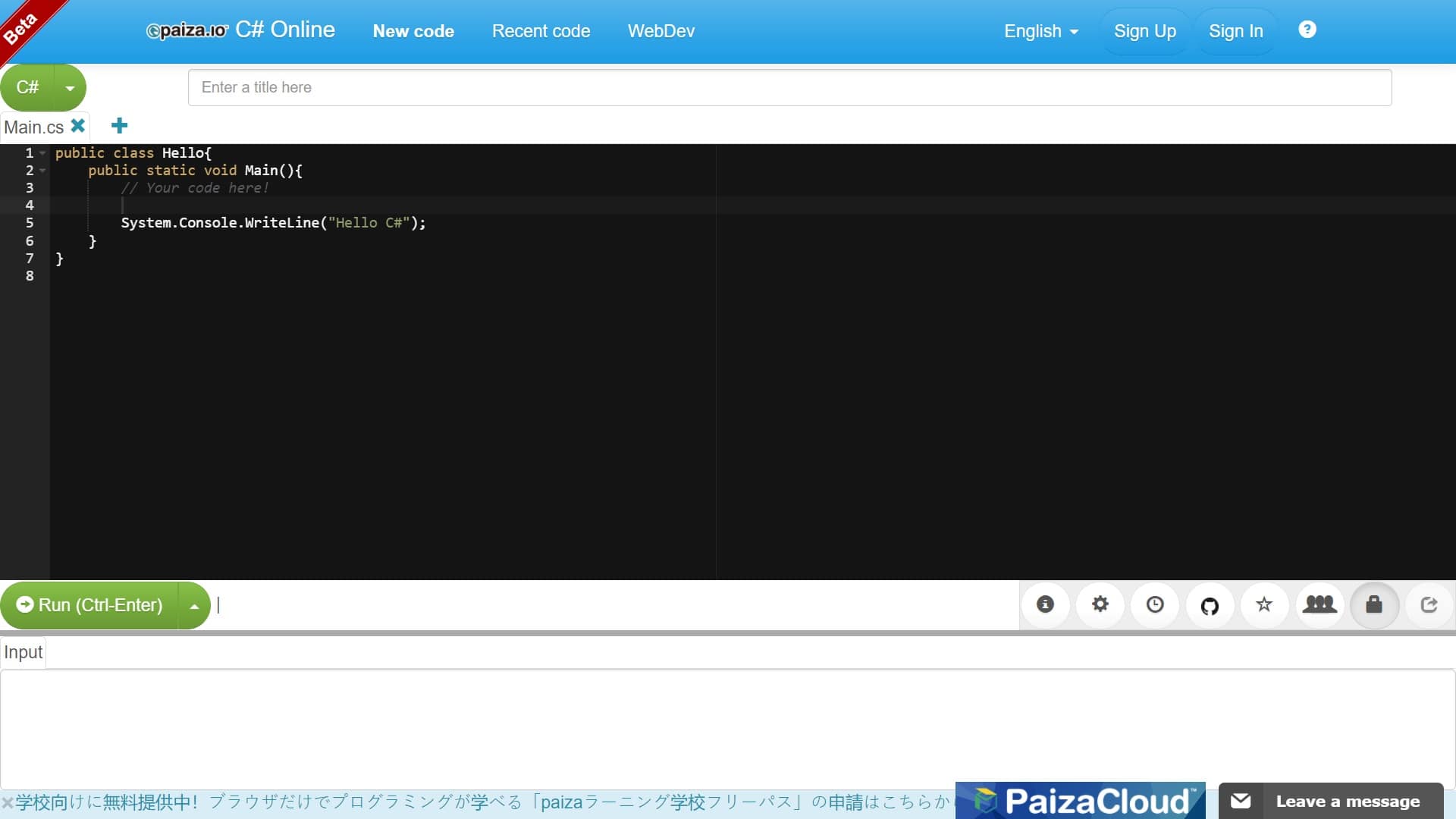 The list is top-billed by Paiza.io. This is a standard online C# compiler that compiles codes effortlessly. The best feature of this compiler is that it allows the user to open multiple files simultaneously. This is a great thing for users who multitask a lot.

Paiza.io has two parts. The first part allows developers to write code while the second part shows the code display. It has a record code section where you can check previously encoded source codes.

Paiza.io has a fairly simple user interface that is easy to understand. It shows a classic but elegant black-and-white theme that is loved by many for its simplicity and sleekness. 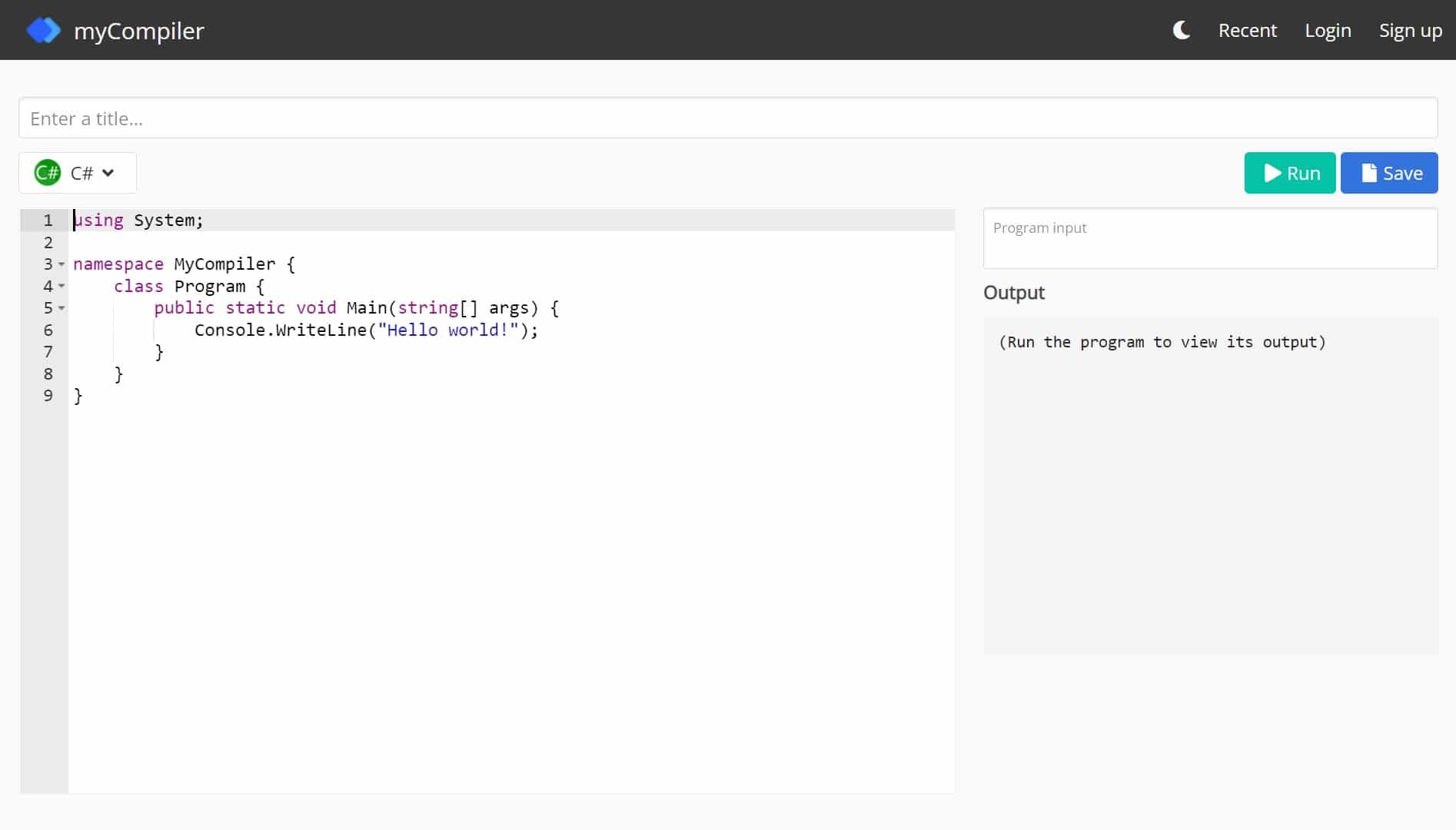 MyCompiler.io is another popular C# online compiler in 2022. It is top-rated because it supports several different programming languages such as Java, PHP, Pearl, Kotlin, C#, and others. It can assist developers in editing, compiling, and running source code to perfect the execution of the IL.

This online compiler also has two divided parts, the code-writing part, and the output part. It has a very handy but modern user interface that is easy to navigate. The app is cool to use because it is shown in sea green and blue color accent. It can go into dark mode if you toggle the function.

You may think that Rextester is only a basic online c# compiler but it is one of the most popular among the C# compilers in 2022. It has advanced features including customization.

With Rextester, users can change the layout of the application to portrait and landscape options. Users can toggle to dark mode theme anytime they want. You can also change the language if you prefer. This best online C# compiler is compatible with several programming languages.

In general, Rextester is one of the best online C# compilers. 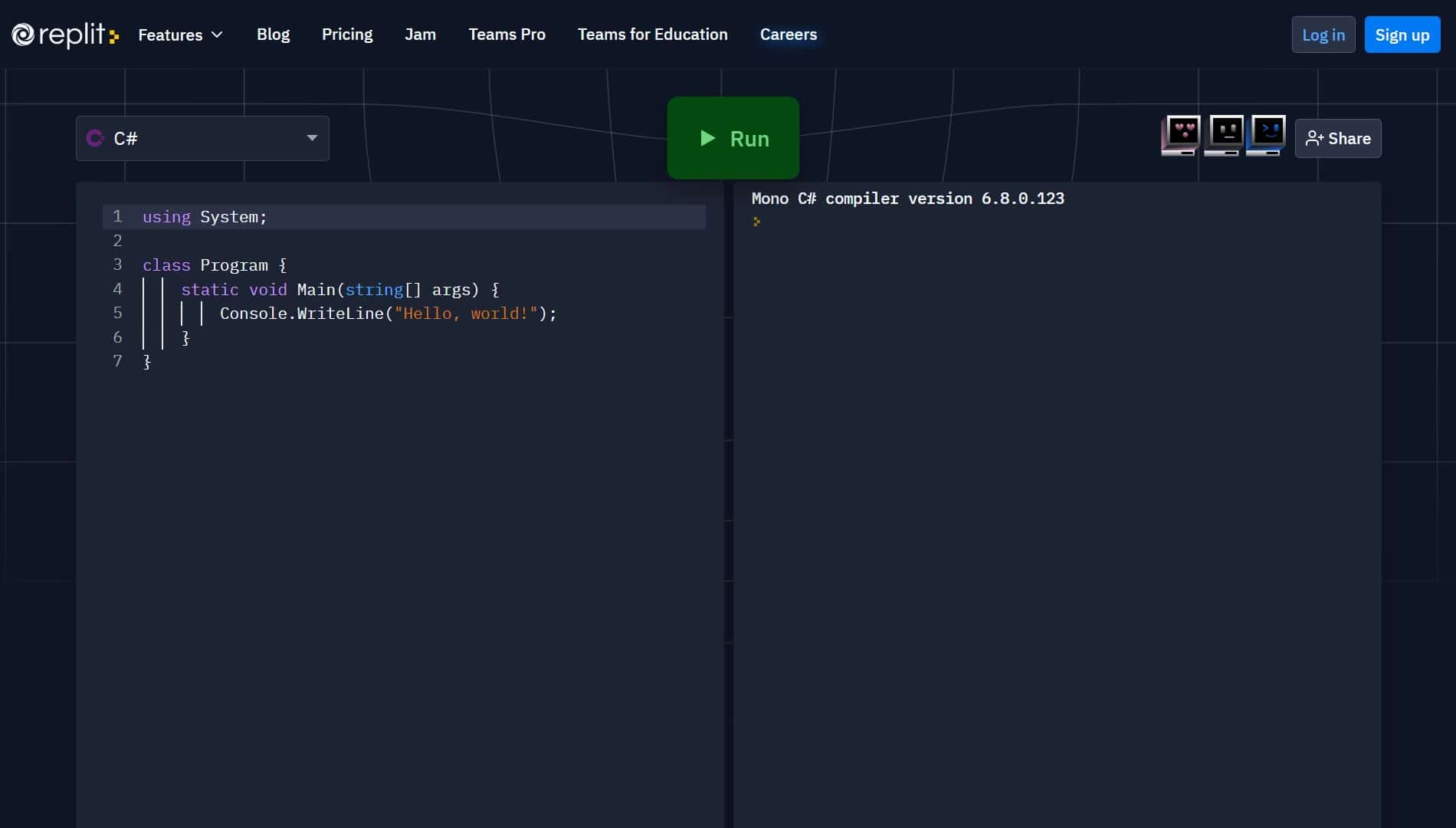 Another reliable C# online compiler is the Replit. The comprehensive features of this application permit developers to edit, compile, and share codes.

Replit has a concise user interface. It comes in a dark theme. The codes are in highlights so they can be seen and understood easily.

The best functionality of this compiler is that it can compile C# codes for effective collaboration. 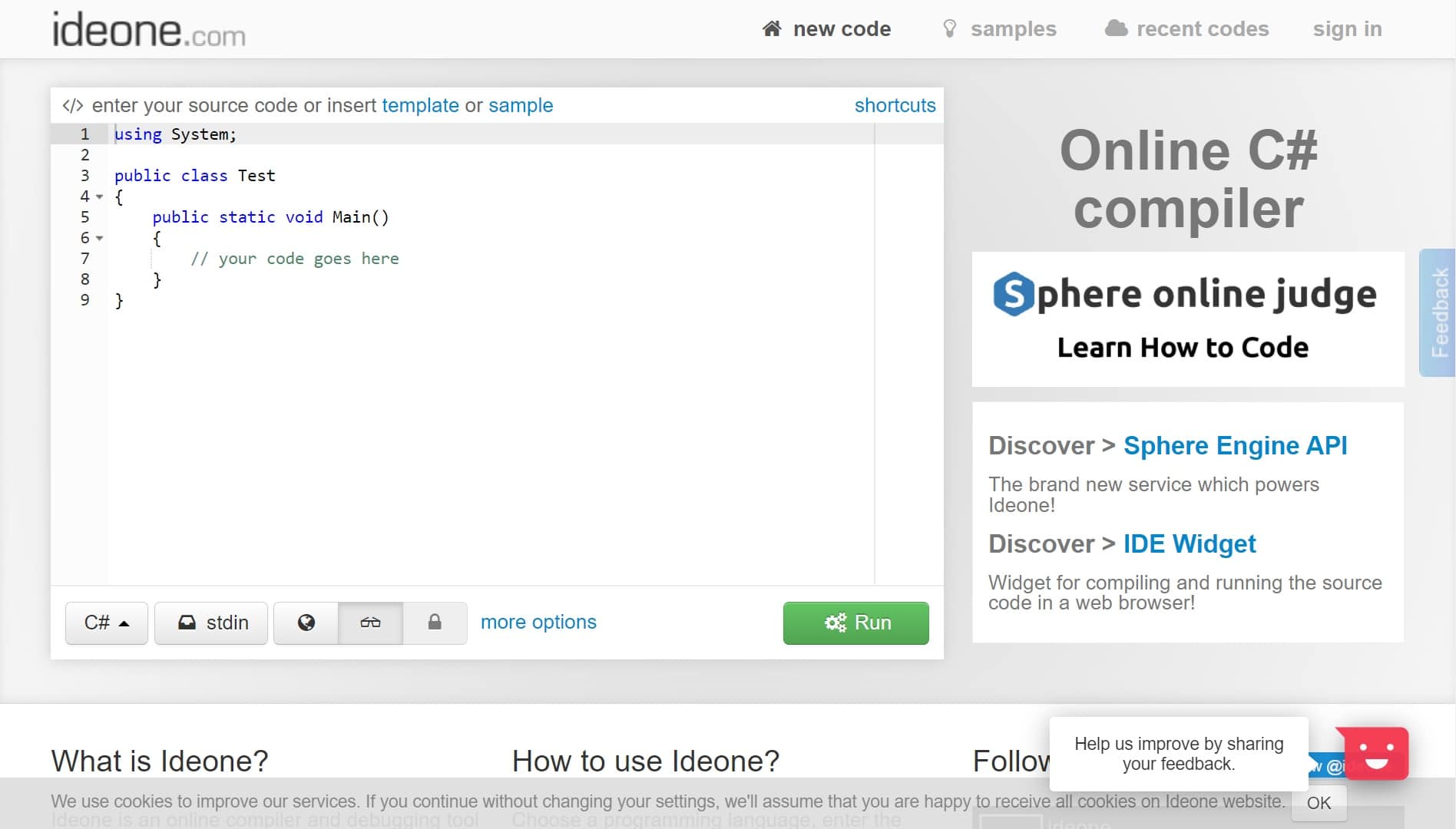 Ideone works well with C# codes and other programming languages like Java, Bash, Swift, Prolog, Scala, Python, Rust, and the like. The user interface of this online compiler is very responsive. It can compile and debug codes quickly and safely.

The most outstanding feature of Ideone is the Sphere Engine. It allows developers to perform codes in a remote server securely. It can execute codes into more than 60 kinds of programming languages making it one of the most favored online C# compilers. 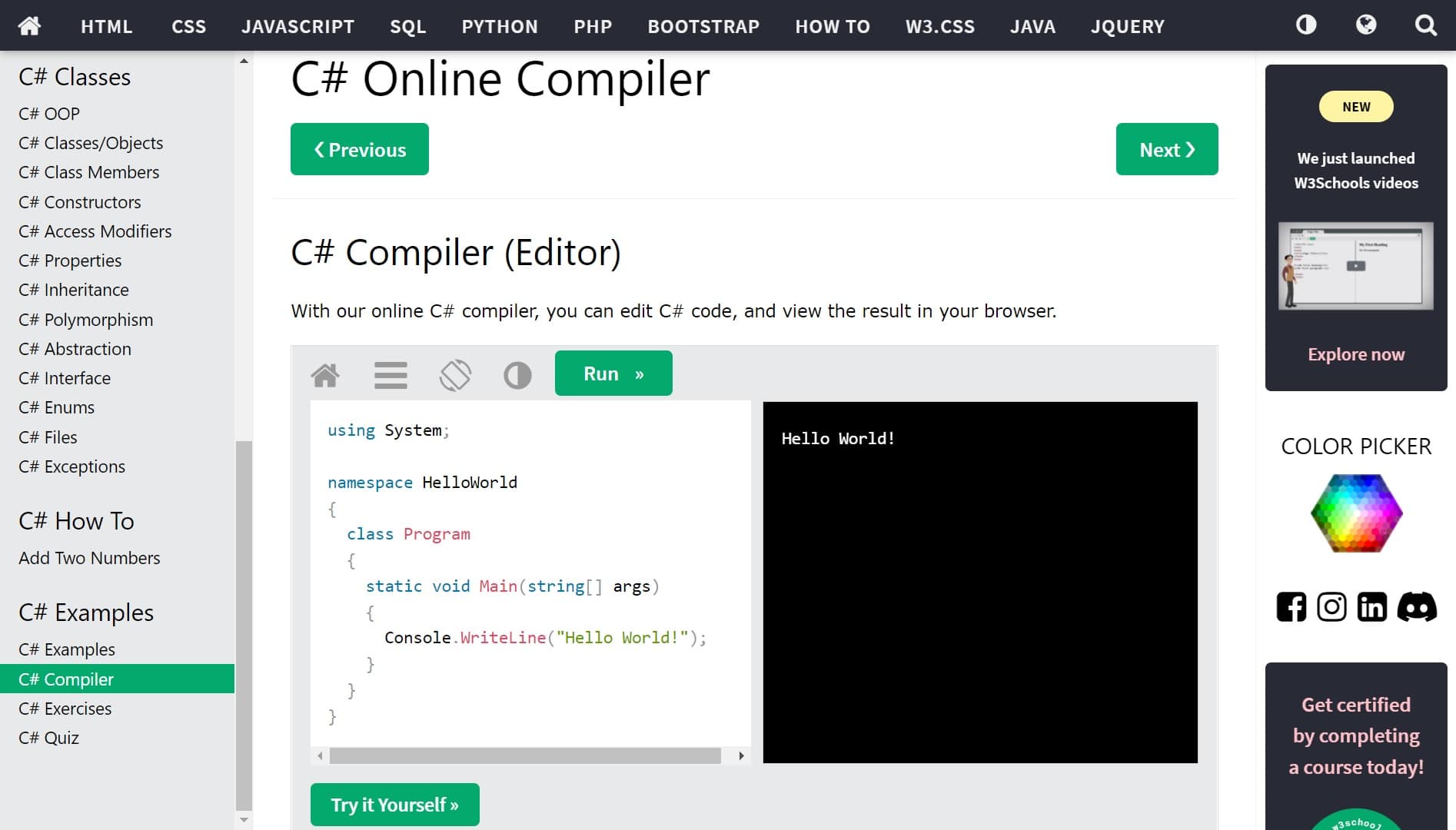 W3Schools is basically among the most outstanding compilers there are. It provides users with learning resources about programming languages including C#. The application has tutorials, examples, exercises, and quizzes for users to learn. It also features a My Learning section where users can track their learning progress. It is such a cool feature, especially for new developers.

W3Schools C# Compiler has a built-in compiler where developers can compile their source code. It has an efficient user interface suitable for both new and experienced users alike. 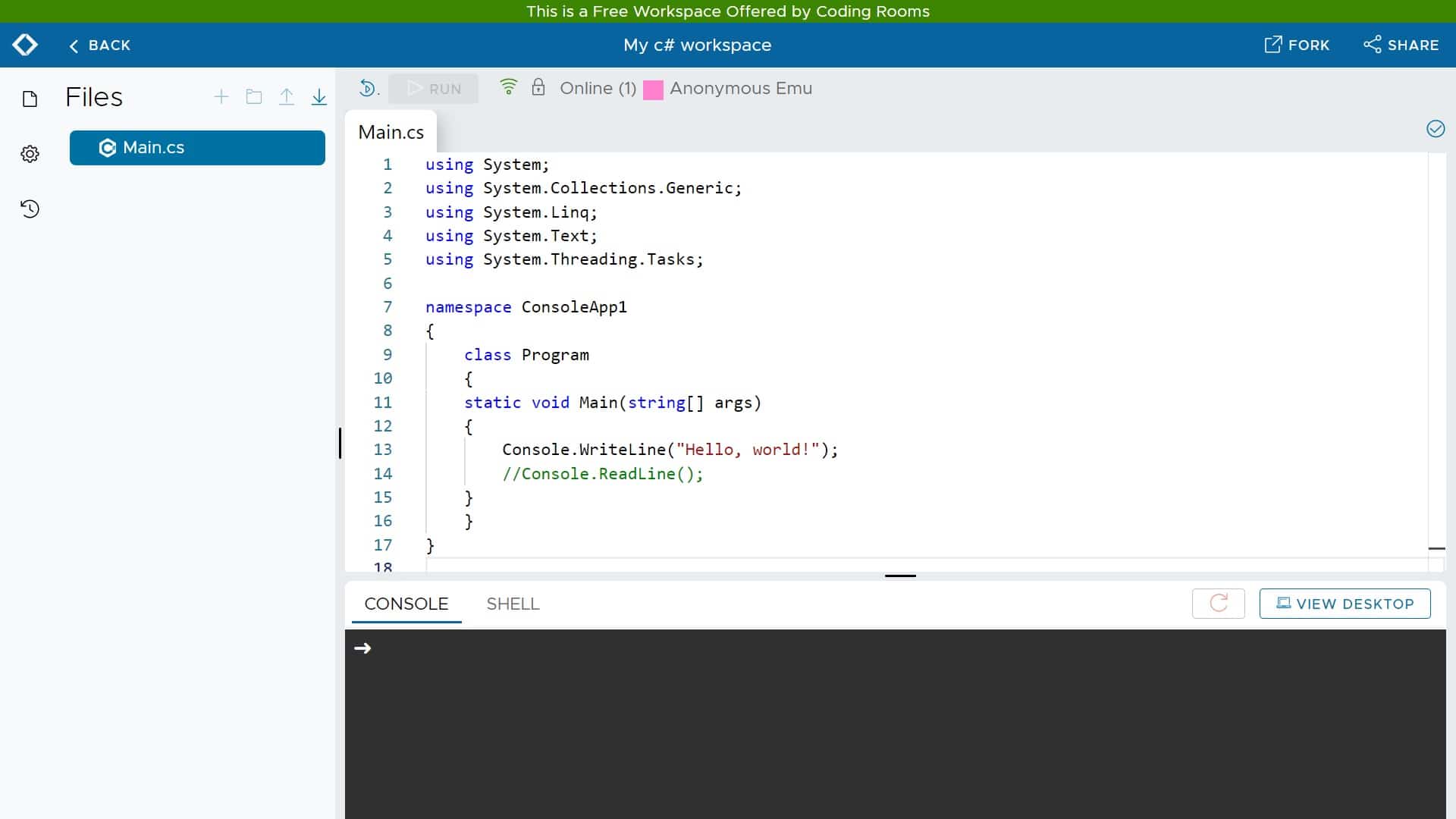 Included in our list of the best online C# compilers in 2022 are Coding Rooms. This compiler is free and it efficiently get the job of debugging done in no time. It has advanced features like a built-in shell and Fork.

This compiler is best for school use. Most universities and intermediate developers use Coding Rooms for their programming activities. There is a dashboard section that permits teachers and professors to view and check the students’ code works.

Coding Rooms has a responsive and crisp configuration. It features a code section on the top part, a console section at the bottom, and a file section on the right side. This compiler allows the use of multiple files at the same time.

Whether you are a student, a professor, a professional developer, or just an enthusiast, Coding Rooms will work for you. 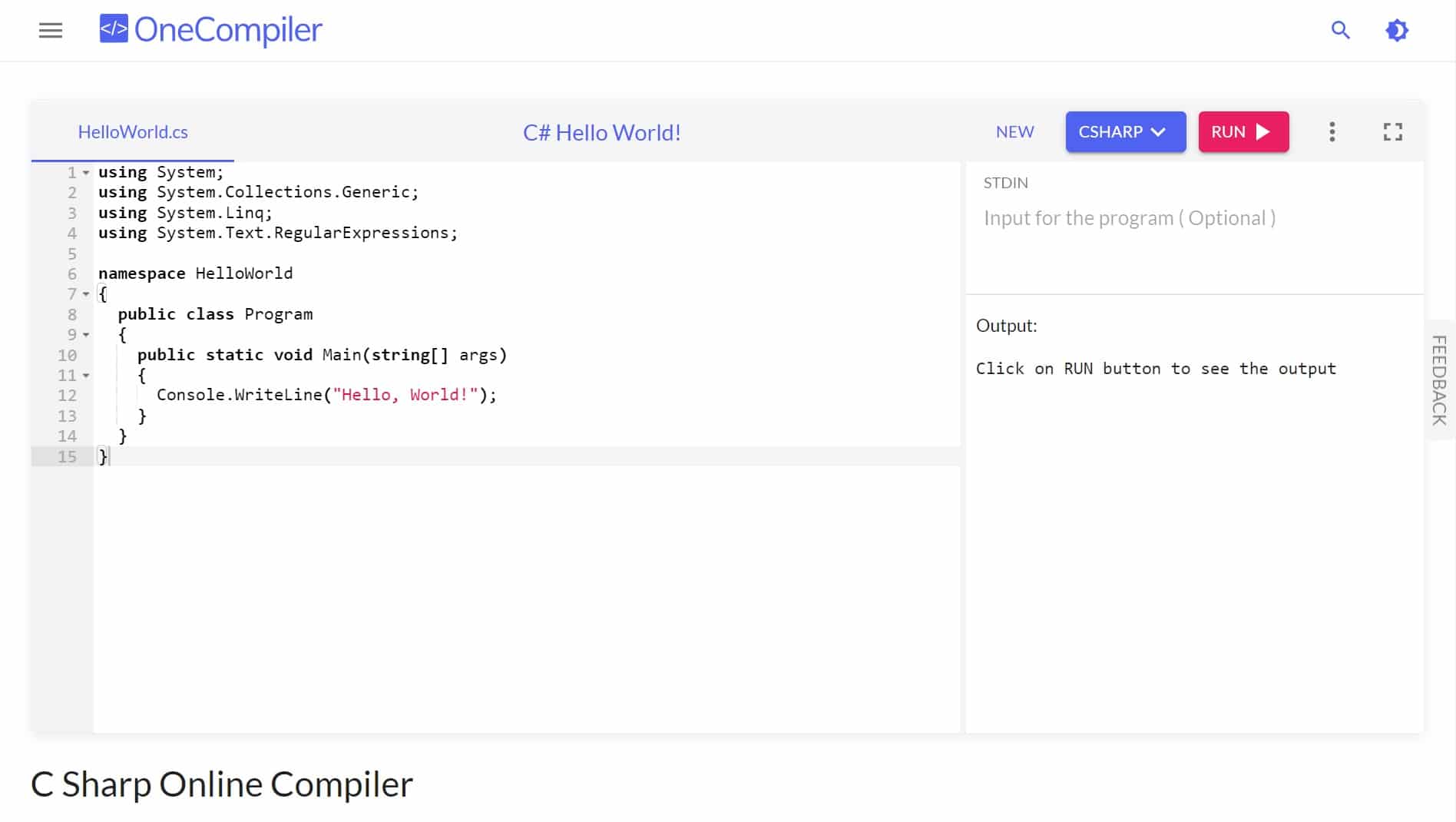 This fantastic online C# compiler is all-inclusive. It shows a simple but colorful user interface. OneCompiler can support numerous programming languages including C#. It has all the wonderful features of the best C# compilers.

In addition, OneCompiler features a challenge section where users can take up several exercises to help them hone their programming skills. 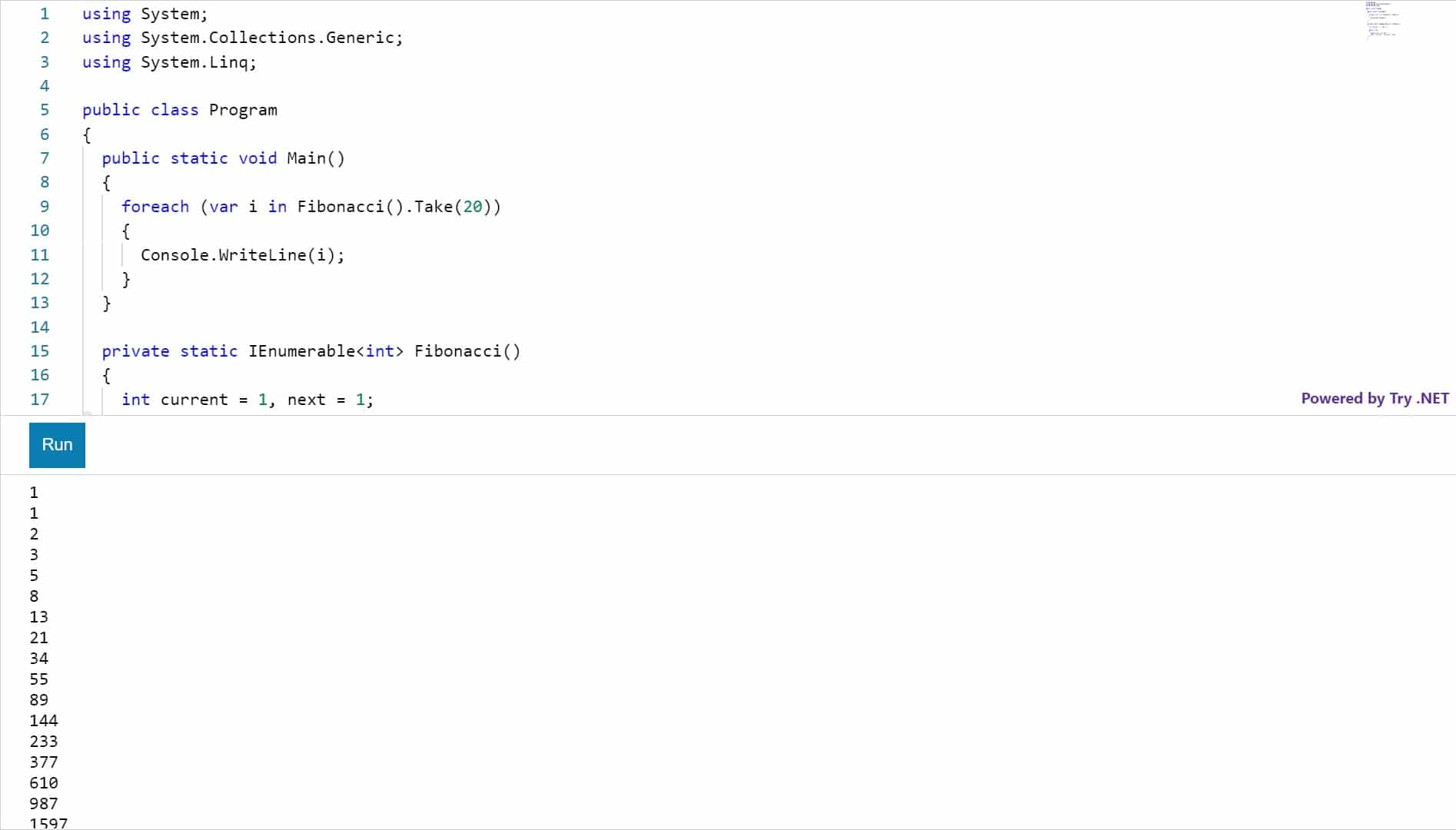 Try.Net is a simple but powerful online C3# compiler that does the job effectively. Its clear configuration comes in a vertical outline that features a code section at the top and a console section at the bottom.

Try.Net. is a free online C# compiler in 2022 that does not display so many irritating advertisements. It’s a great option for users that does not want disruptions in their programming works.

We provided the best online C# compilers in 2022. Each application has its own unique feature and all works efficiently. You can try them all and see for yourself what works best for you. If you are a newbie in programming, W3Schools and OneCompiler will work perfectly for you. It will help you prosper your skills. However, if you are an intermediate, expert or professional, Coding Room and Try.Net is an amazing choice.