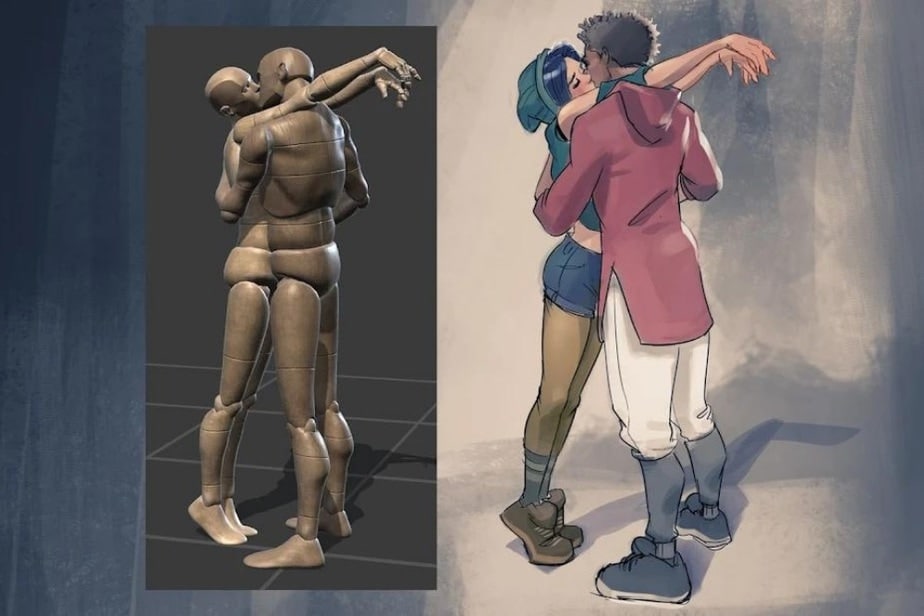 There are a large variety of art apps available to the public already. There are drawing apps dedicated to professional artists, and art apps catered to beginners who want to learn how to draw. However, regardless of skill level, there is one thing that is needed by both groups: references. Art references are needed to take art to a higher standard of quality, however, there aren’t too many widely known apps for art references.

In this article, we’ll outline our list of the 8 best reference apps for artists, both pro and beginner. These apps are catered for iOS and Android devices.

As artists, it’s always important to have a reliable app, website, or software that can display a set of references such as human figures and poses. It can be inconvenient to spend hours on end browsing for the right references, however. So finding a quality art reference app is important in making the art creation process much easier. Continue reading for our list of the best reference apps for artists. 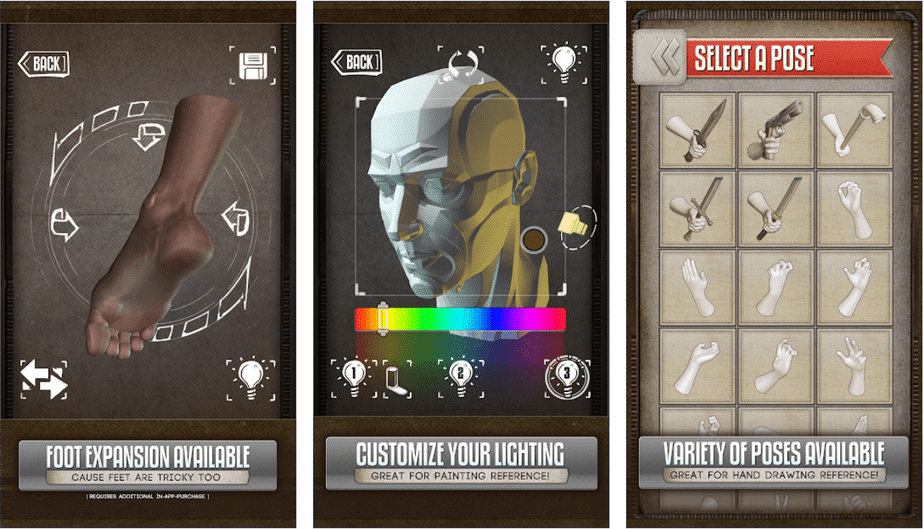 The first app on our list is a platform called Handy Art Reference Tool. Available on iOS and Android, this app was developed by Belief Engine and features all kinds of poses, objects, and figures of anatomy that you can use for your illustrations. This app costs $2, but it is a small price compared to the number of references and customization features that you can get with it.

Anatomical parts such as hands and feet, which are regarded as highly difficult things to draw, can be customized by adjusting the size or width. There are even references where models of hands are holding different kinds of objects.

This app is a great investment for both beginners and pros, and we’re sure because even the co-creator of The Walking Dead recommends it to artists everywhere. Even with all of its content and features, it’s easy to use because of its intuitive user interface. There are other in-app purchases available on the app if you want more out of the platform. However, all in all, this is a greatly solid choice for finding your art references. 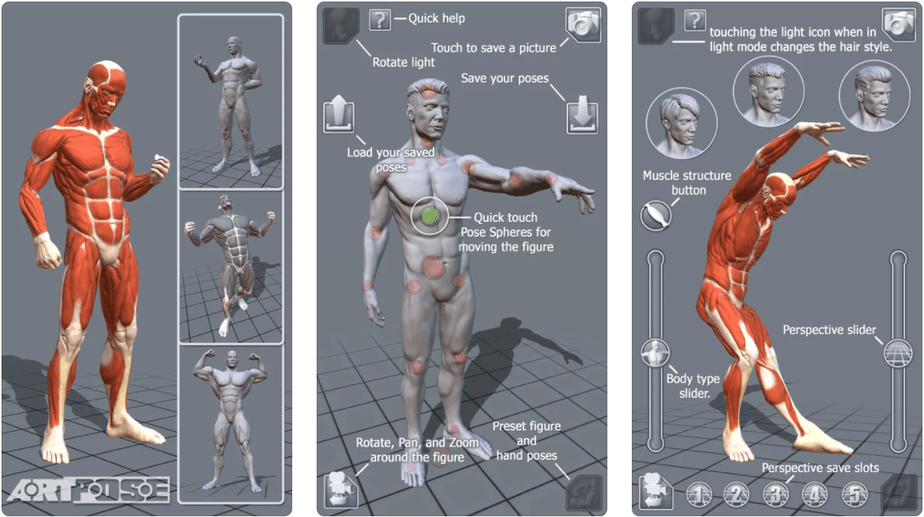 ArtPose is a series of apps created by company Artwere Apps. It’s available on iOS and Android in three different versions: Artpose FE for female models, Artpose for male models, and Artpose Pro for both male and female models.

Artpose is your standard, run-of-the-mill reference software for displaying a 3D human model. In using Artpose, you will be able to adjust the camera angles of the body and customize the backgrounds. You will also be able to use different sliders to adjust the body type and compositions of your model. Artpose features 240 pre-set poses, so you have an extensive amount of options to choose from to fit what you need. These poses can also be changed and saved as your own custom pose.

Another convenient thing about Artpose is that you can have two human models interacting with each other as well, making it easier for artists to create illustrations that involve interactions between two people. If you’re looking for a reference application that goes in-depth with their content for human models, Artpose is the app for you. Artpose FE and Artpose costs $3.99, while Artpose Pro costs $8.49. 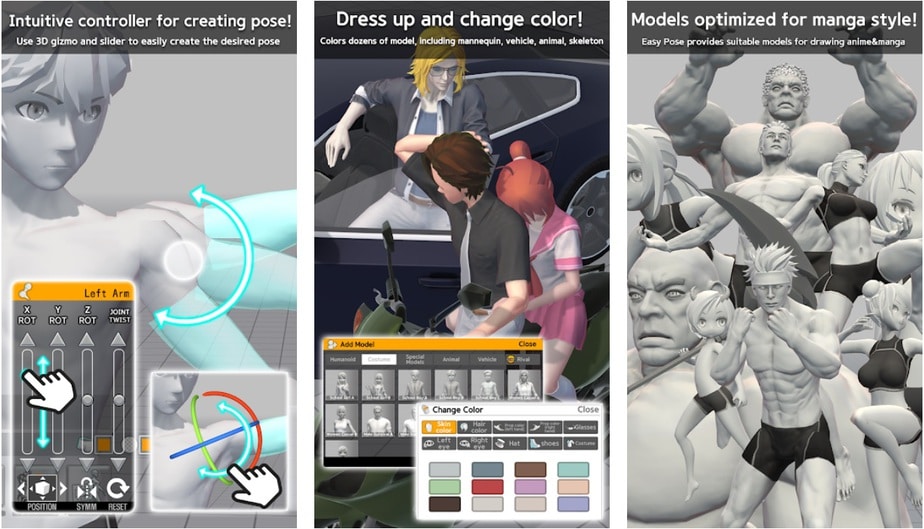 Easy Pose is a popular art reference app because it offers its features for free. It has been downloaded over 10 million times on Android, and it is also available on iOS devices. Its popularity can be attributed to how easy it is to navigate and use, making it an artist’s best friend.

Similar to our other picks for art reference apps, Easy Pose lets its users choose from an extensive array of poses and body types that can be customized. This app is more catered towards beginners who want to excel in illustrating stylized characters for comics, animation, or even games. While other apps focus more on realistic human body types and models, this focuses on more traditional cartoon bodies.

Easy Pose also accommodates up to 6 bodies or models on your screen. This makes the app suitable for creating references for group scenes or illustrations. Easy Pose comes with a free and paid version. You can create your own poses on the free version, but It will take some getting used to.

If you want to add other accessories or props such as clothing, hair, or even handheld weapons, you will have to purchase them through Easy Pose’s DLC shop or through purchasing the paid version as a whole. The paid version removes the ads you’ll be encountering in the free version. It also allows for you to add more models to your screen at the same time. 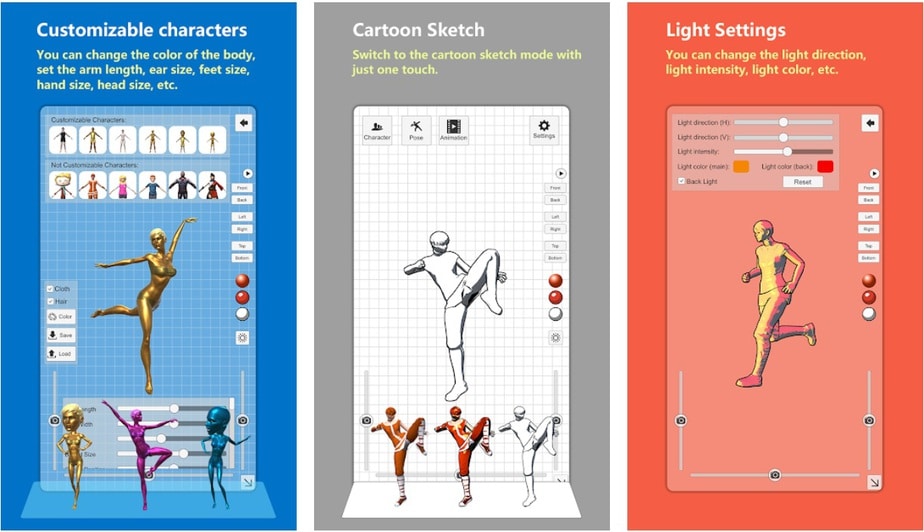 You can customize the different models form Pose Max, such as their poses and their body parts. The app also features non-customizable characters with their own hair and clothes. There are over 40 different options that you can choose to customize when it comes to manipulating your models to how you want them to look like.

Another pro to this app is its easy to use interface. You can adjust your models’ poses with ease and even add animations to it using Pose Max’s animation library. Through the use of buttons, sliders, and dropdown lists, you can create your desired models all for free. This is the best app to use if you’re a beginner and you’re only starting to use art references for your illustrations now. 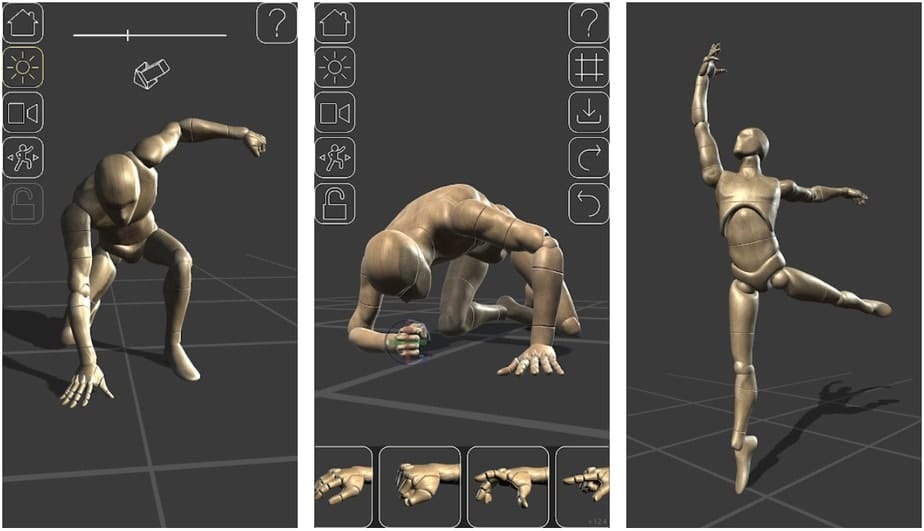 Poseit app is rather popular with artists, with over half a million installs for Android and perhaps just as much for iOS. Unlike Handy Art Reference Tool, which is so far the closest, the art is a cross between anatomical and wooden dolls. There is an appeal to it that it does not make the reference drawing too intimidating. It’s a free app, which means there will be ads and in-app purchases that are not at all expensive.

Poseit is another popular iOS and Android app for artists that are used to create human models for their art. Poseit’s character designs are more akin to wooden dolls that are close to human bodies. It’s another free app that is straight to the point with its features, and its user interface makes it another great app for both beginners and professionals who don’t want to deal with too many features.

Poseit aesthetically looks great because of its great use of color and lighting, making it easy for users to use its models as references for their illustrations. The way Poseits’ models are made is also suitable for learning human anatomy and proportions. Poses and proportions can be adjusted using the app’s different sliders. There are also a number of prepared and standard poses that users can choose from. 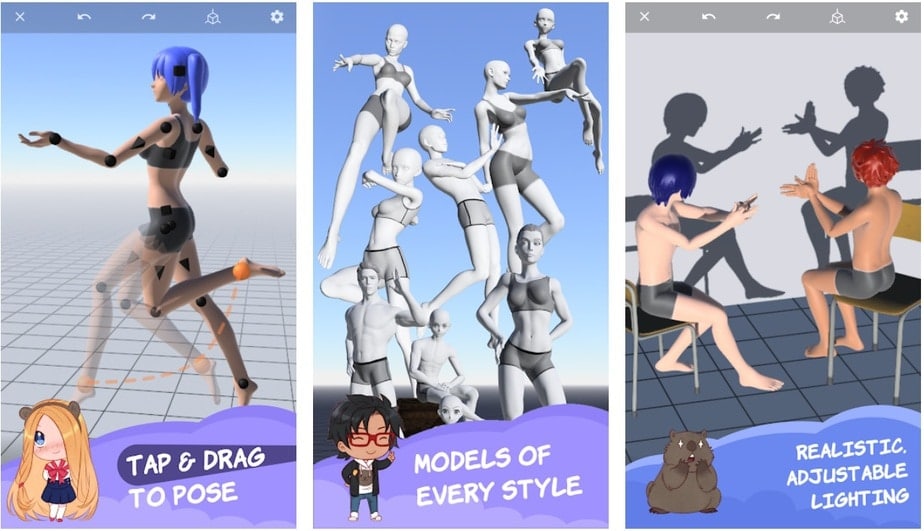 Magic Poser is arguably the most popular reference app among all of the contenders in this list. With over 5 million downloads from Android users and available versions for both iOS and even the web, Magic Poser was created to feature models that are similar to popular drawing styles used by anime and manga artists. This makes it a beginner-friendly app for those who want to start learning how to draw anime-eqsue characters for their own portfolios. However, Magic Poser also features models that resemble real-life human faces and bodies.

Magic Poser is able to render characters smoothly in a high resolution. Though Magic Poser can be downloaded and used for free, it also requires users to subscribe to a premium version of the app to access other models and accessories such as hair, clothing, and props. 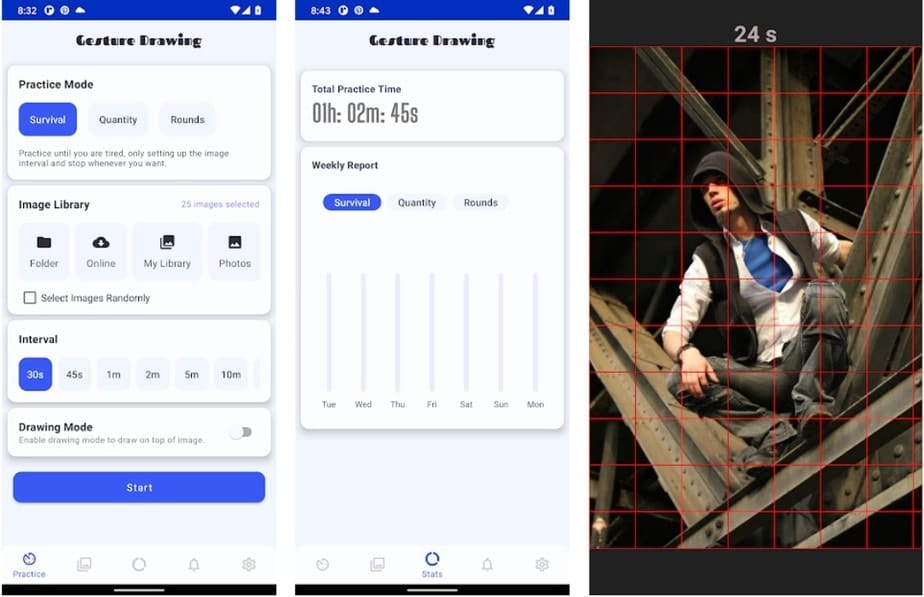 Gesture Drawing Practice takes a different approach to being an art reference app because it uses real life images where users can sketch over the images to better understand human body features and proportions. The images can be provided by the user from their own personal gallery, or from the general images provided by the app. This reference app allows users to practice their art skills under a timer, and they can record their progress.

Users can schedule timers to challenge their ability to sketch different photos. There are also different types of exercises, such as survival mode, quantity mode, or rounds. Finally, this app is able to track the progress of the user through the practice sessions they go through. Gesture Drawing practice is free to use, however, there are different in-app purchases that can be bought to ease the user experience. 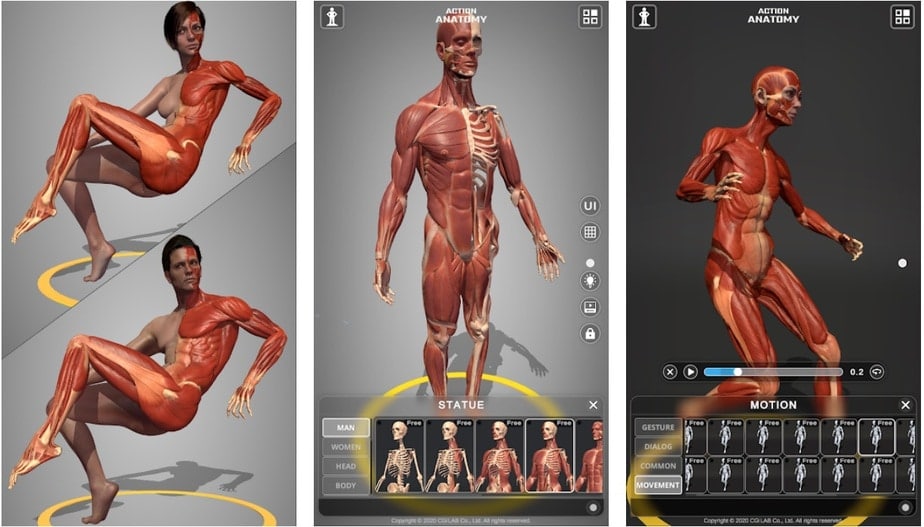 The final app for our list of the best art reference platforms for iOS and Android is called Action Anatomy. This app is available in two different versions: Lite and PRO.  Action Anatomy Lite provides a more in-depth look into human anatomy by showing muscle movement and placement in the body. The anatomical models also feature highly detailed representations of bones and skin.

Action Anatomy is best for artists who want to focus on learning everything about human anatomy which can be translated into their illustrations. It might be intimidating for beginners, but because of how well-colored and lit the models are on the app, its high quality features make it a good addition to even a beginner artists’ toolkit.