India has progressed a lot in terms of technology, however, much of the population has yet to achieve a good status of living. But that doesn’t mean they should not have access to modern-day services accessible mostly on mobiles. The prices for decent mobile phones remain out of reach for many. A good way for citizens to purchase decent mobiles is to get them through the second-hand market. This article discusses the best websites to buy second-hand phones in India. 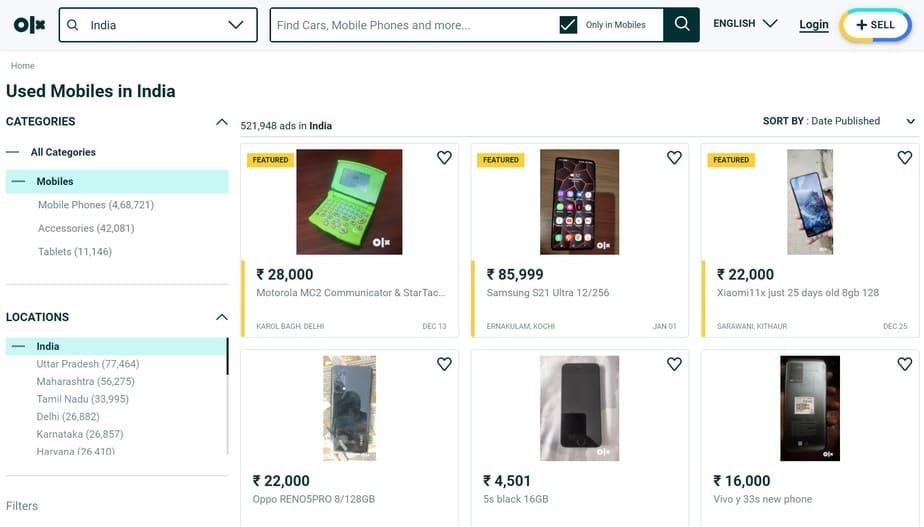 OLX India is a popular website where people can get second-hand anything and they also sell new items and services as well. OLX has a wide reach in Asian markets, second to and maybe even more popular than eBay. OLX would have the widest selection of second-hand phones in India. As a website, OLX is pretty easy to use, and buyers and sellers can communicate directly through various avenues such as direct chat on the website or direct calls through numbers provided by sellers. It should be noted that users should be careful when dealing with sellers directly. Buyers can also easily select the region they live in or are closest to, in purchasing the phones they want. 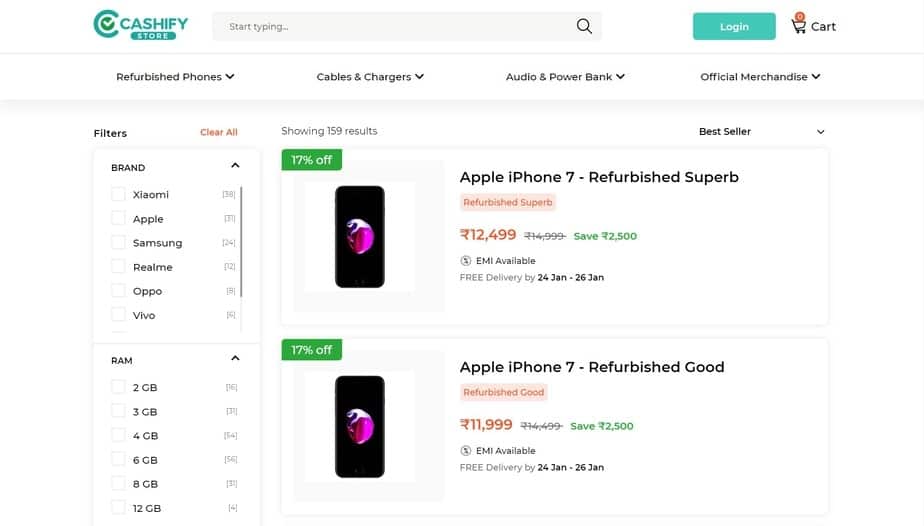 Cashify is one of India’s more popular sites to purchase second hand phones. By second-hand, it means refurbished or re-made from older phones. Phone owners sell their older phones to Cashify for extra cash and even buy newer phones from the site. Cashify then refurbishes the phones they buy. Buyers are then assured that the phones they purchase are free from any issues the phone may have from the use by the previous owner. The phones are cheaper, cleaned, and would even come in a box. And when one says refurbished, some phones may have minor issues from the factory, are repaired, and would even be good as new. Cashify does not only deal in second hand phones, they have new ones as well and also sell other gadgets and accessories. As a website, it has a clean look, and is easy to navigate, and is also available as a mobile app.

QuikrBazaar is another popular website competing to be the best website to buy second hand phones in India. Like Cashify, QuikrBazaar not only sells second-hand mobile phones but almost everything including furniture, appliances, electronics, toys, and sports gear. As a website, QuikrBazaar also sports a clean interface that can be navigated easily. It also has a companion mobile app. Like OLX, buyers can directly communicate with sellers through direct chat or direct calls through the site. The items displayed, pertaining to mobile phones are very detailed and items are well photographed. 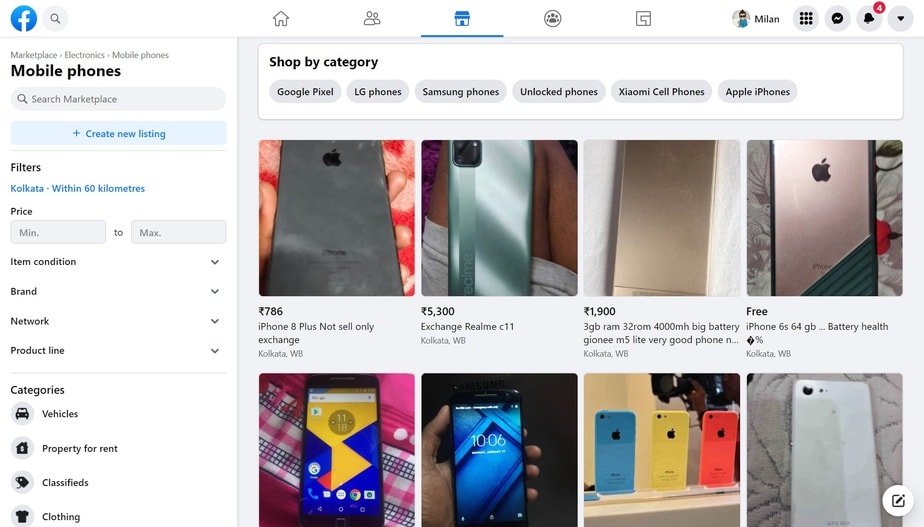 Unfortunately for eBay, there are so many options now for selling second-hand items, and Facebook also chose to join in by creating Marketplace. Facebook Marketplace is a more, in-your-face place to sell secondhand items, especially mobile phones. It lacks the formality or elegance shown in other sites on this list but has become a major player in the sale of goods through social media. However, looking for what you need would be a bit tedious as some sellers will not post complete product info unlike the other sites here, but it’s assumed that buyers already know what they want. The pictures mostly lack charm but do show an honest look at the item and its condition. As always, buyers should be wary when purchasing secondhand items from strangers. Online purchases of such nature can be hit or miss. 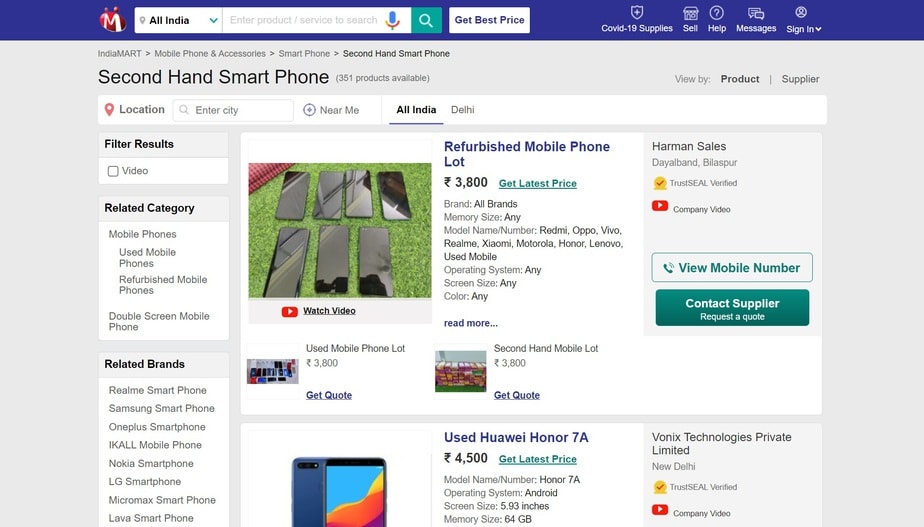 Indiamart is another of India’s main sources of second-hand phones and many other products. As a website, Indiamart has that old-school feel with design choices from the last decade. It looks congested as its approach seems to be to provide as much information as possible at once. It’s not too important though because it is quite functional where users are able to quickly search for what they need in areas that they’re in or are close to. Pins or thumbnails allow for immediate contact with sellers and the site displays as much information to the items available through videos as well as ads. Digging deeper does show more relevant information about the ad items. 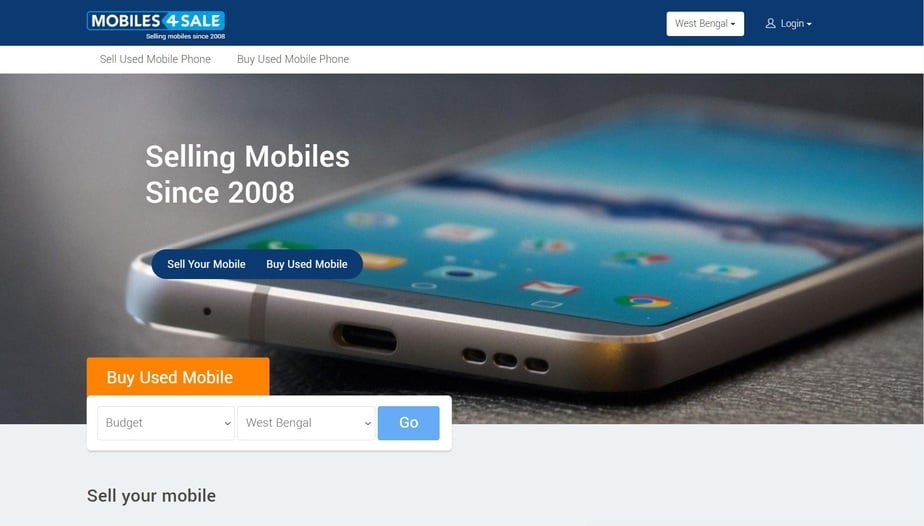 Unlike the other entries in this list, Mobiles4Sale is more dedicated to selling mobile phones and nothing else. Mobiles4Sale touts itself as the best website to buy second-hand phones in India, and it should be as it’s been around since 2008. However, the website looks rather sparse, unlike busy-looking Indiamart. But being around for a long time has its advantages as it can be regarded as a trusted platform, while the way items are presented is quite similar to the Facebook Marketplace. Another disadvantage here is that it requires a login account before being able to effectively search for items. Though its dedication to mobile phones keeps users in focus lest they end up purchasing something else. 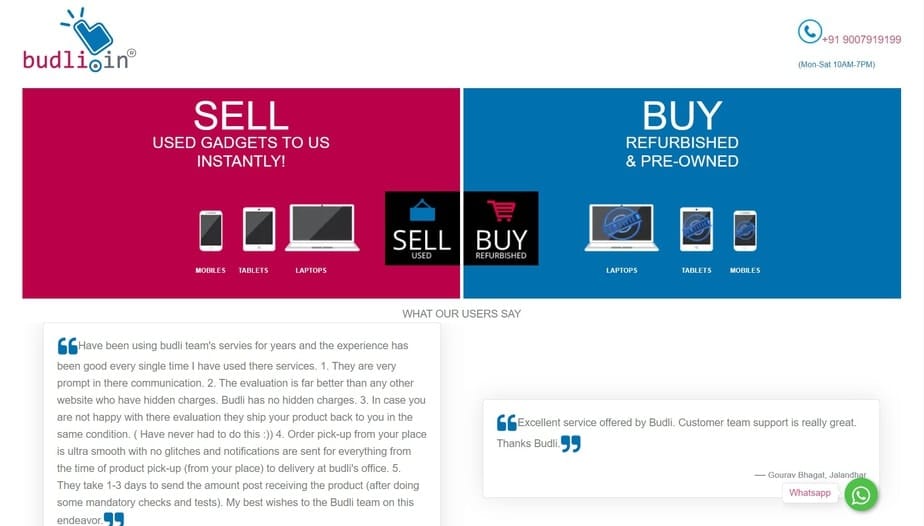 Budli.in is an online store for refurbished and pre-owned mobile gadgets. Its inventory comes from various sources including people that sell their older devices on the site. The website has class featuring a very clean look even better than other sites that sell brand new items. The website is designed to elicit trust in buyers, and products are presented quite beautifully with complete product information. The site is well organized, and products are easily searchable. 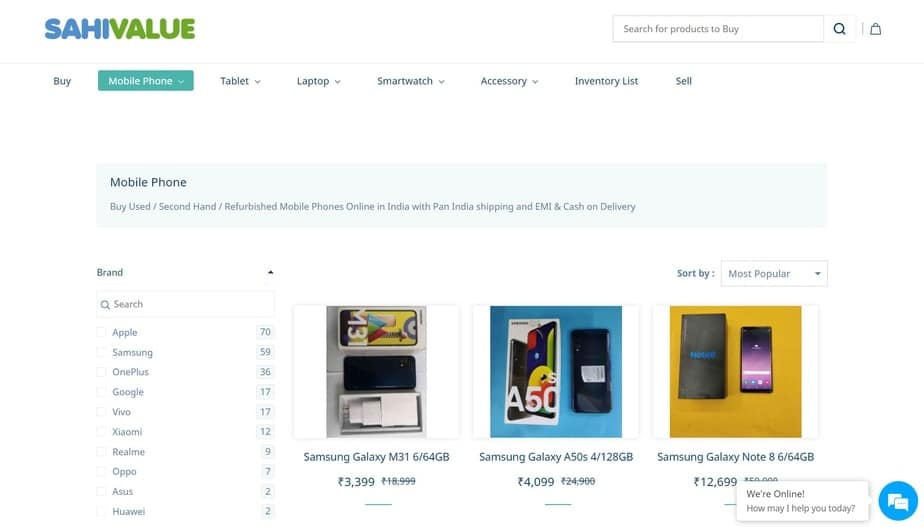 Sahivalue is a website that can be described as being quite forward and honest regarding the condition of their products, though it doesn’t flood visitors with information right away. Users will have to drill down to what they want before seeing any products on the screen. Aside from that, Sahivalue is much like Budli.in as it’s a website that specializes in buying and selling pre-owned gadgets divided into five categories – mobile phones, laptops, tablets, smartwatches, and their respective accessories. Another aspect of Sahivalue’s forwardness is its complete inventory spreadsheet list of items available. Information includes the item brand, model, price, color, grade, warranty, and actual photos of the item. Such honesty earns the website to be included as one of the best websites to buy second hand phones in India. 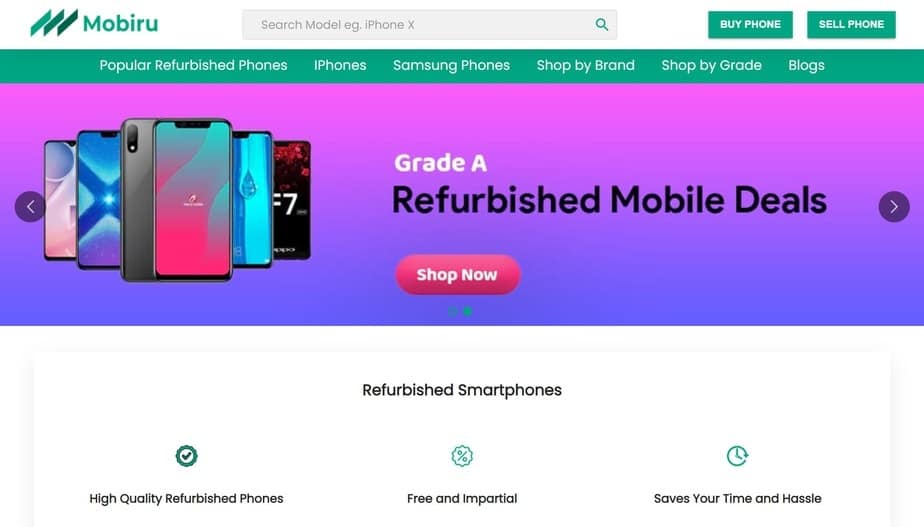 Mobiru is also a website that buys and sells secondhand phones like Budli and Sahivalue. Unlike them, Mobiru India focuses on mobile phones and looks flashier. Also, unlike Sahivalue, it displays some phones for sale upfront. Like Sahivalue, it can quickly direct buyers to items depending on their grade or condition or even by model popularity. The listing is different than the others listed here. Mobiru India is actually more of a portal that directs the users to deals to other sellers depending on their choice on the site’s main menu.

Mobiru India will present the user shortcuts to deals provided by Cashify, Sahivalue, Yaantra, Budli.in and other secondhand phone providers. The site also displays comprehensive information about the phone model chosen by the user. The site looks clean and very easy to use and does not even require an account. It can be easily considered as the best website to buy second hand phones in India. It does not however filter by location, so the buyer is better off directing his/herself to one of the online store listings rather than the classified-type sites. 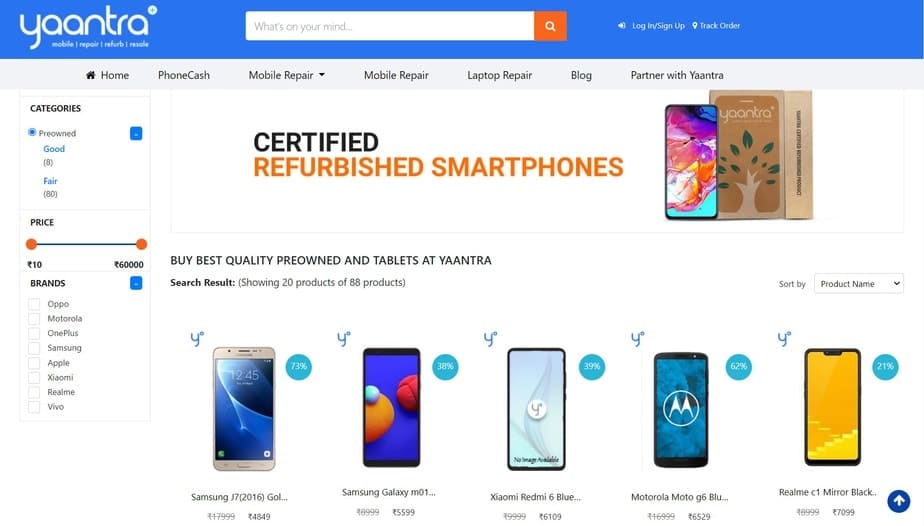 And lastly, we have Yaantra, another popular online store for refurbished and pre-owned phones. It also sells smartphones, laptops, smartwatches, and accessories and also features gadget repair services. The site looks relatively clean, easy to use, and offers good deals. It requires an account login to make the most of it and make transactions, though the items are browsable without one. However, looking at some items for sale, the items don’t have as much technical information compared to the other sites in this list. Also, they lack the actual pictures of the items which can easily throw buyers off. Despite those, Yaantra highlights that all products are quality assured with a 1-year warranty and up to 7 days replacement. Yaantra is popular enough to warrant a look.

With this list, we’ve established that India has a healthy secondhand mobile phone market. And many of these sites accept different modes of payment, perform shipping, and even ship to foreign countries for their own secondhand markets. Not only is it economical for the short-term to purchase a secondhand phone, but the secondhand market can also help save the environment by keeping the amount of e-waste to a minimum, wherein the mobile industry is a large contributor. If the phone is not yet broken, it can be of use to someone else on a budget.