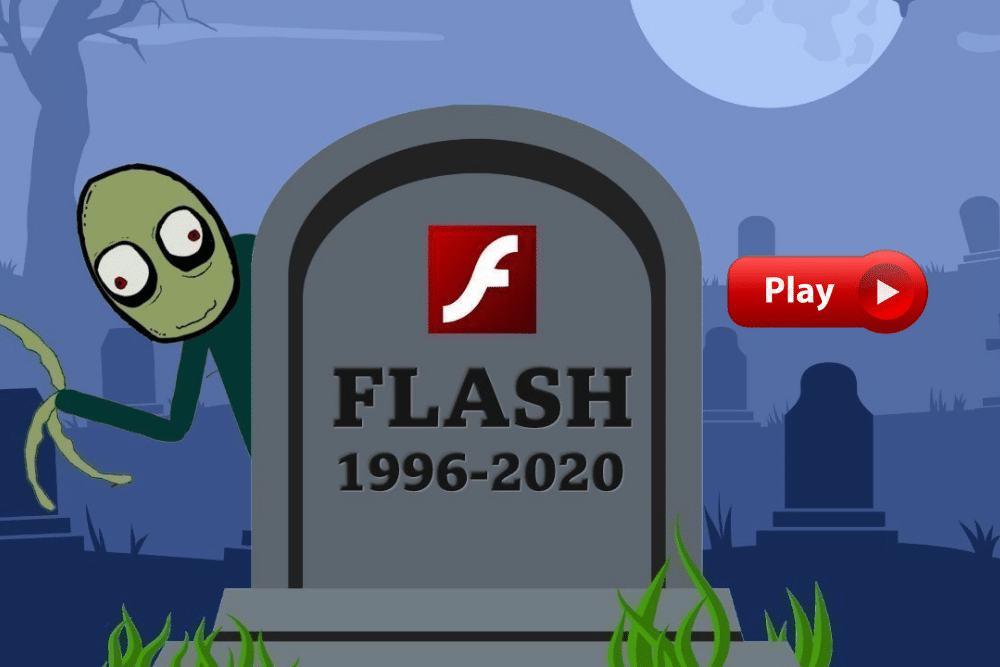 Adobe Flash served as a fantastic platform for developing websites, multimedia presentations, animations for television programs and advertisements, and a ton of games. It was a well-liked platform for game development until the embryonic but well-liked iOS ecosystem invalidated it because of security vulnerabilities. However, flash supports  a lot of great and famous games. And they can be played when offline.

Adobe was able to simultaneously shape the web, mass media, and gaming for a sizable period in the history of computers. The Adobe Flash platform offered the globe a wide variety of entertaining and vibrant games. The versatile and simple-to-learn ActionScript makes it possible for users to develop animations and fantastic game designs. Unfortunately, various security problems, a lack of support, and the advent of HTML5 and other web interaction technologies led to the forced removal of Flash.

With the advent of removing Flash and taking security matters to the highest level, the greatness of Adobe Flash has been neglected by many. However, those who are willing to risks can still play games through Adobe Flash by installing the Flash Player themselves. Here’s how.

How do I Download Flash Games to Play Offline?

Users can download older browser versions, plug-in Flash, and go to Flash sites to play their old favorites in Flash games today, but there is a risk if playing is not done offline, thus learning how to install Flash games to play offline is the best course of action.

Get the Adobe Flash Player as the first step. Many websites that value computer history or are devoted to vintage gaming use the Adobe Flash player. Additionally, it can be found in a lot of trustworthy software source codes to assist any ongoing projects that still use Adobe Flash. Open an outdated browser, such as Internet Explorer, and turn Flash on there. Alternatively, you can download Adobe’s Flash Player Content Debugger, a standalone Flash player that is browser-independent.

Getting the Flash games themselves comes in second. Although Flash-supported games are still available, they are sadly a shell of what they once were and now rely on ardent players. As previously indicated, visitors will encounter a warning while accessing specific websites that their browser might not support Flash or that they would need to install Flash manually. Fortunately, their games can be installed voluntarily by clicking a download button or manually, as we’ll explain right away. 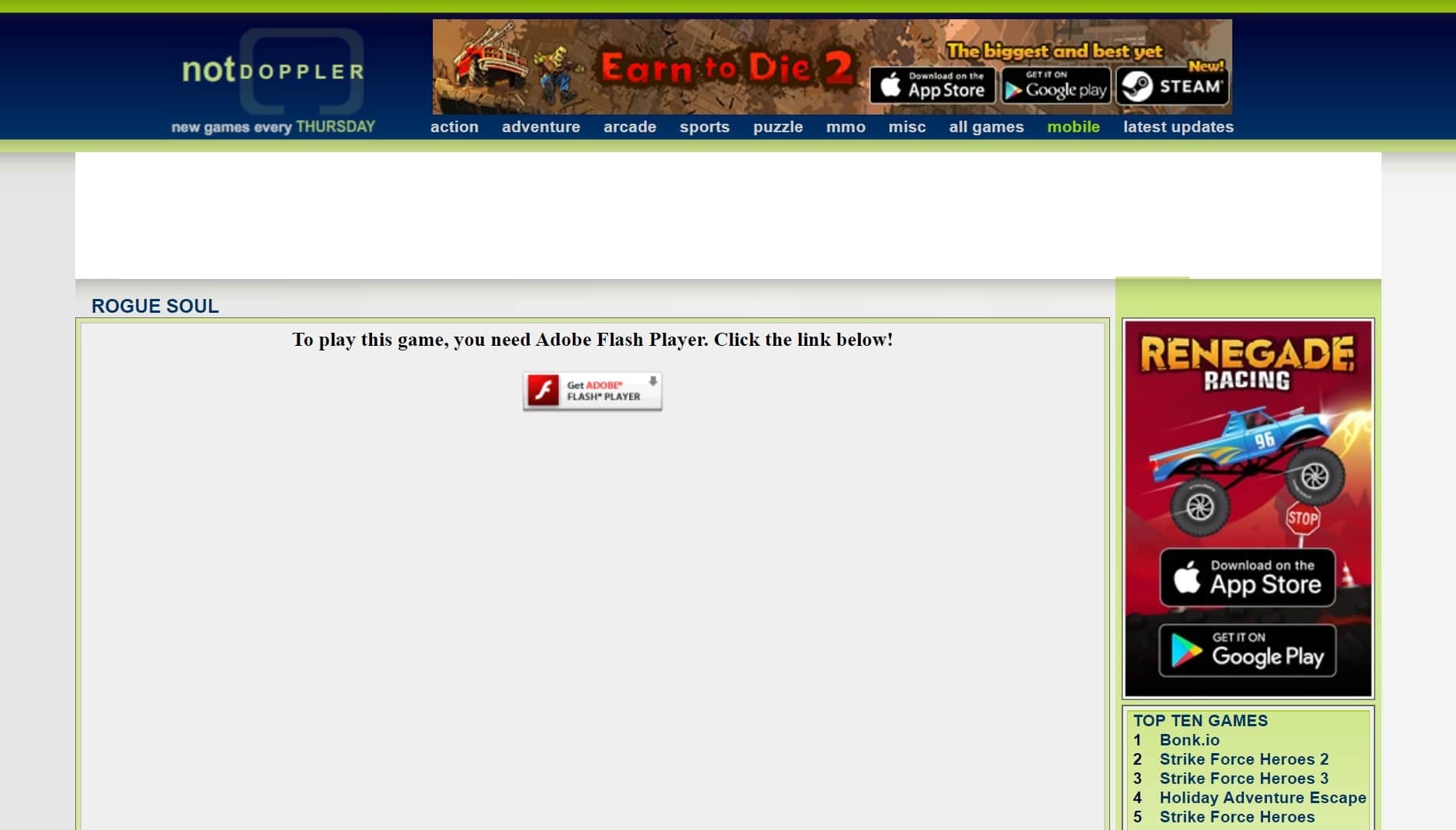 Let’s give an illustration. On this website, we can attempt the well-known game Rogue Soul. The website will announce that it does not support  Flash when it first loads. Users will need to install Flash for it to work properly; otherwise, they will need to switch browsers. But the Flash File itself is what we’re after. Fortunately, the majority of Flash games are bundled into a single file with the extension Shockwave Flash making them simple to download. Most browsers, including Firefox and Chrome, allow you to view the page’s source code by hitting Ctrl+U, or you can just right-click the page and select View Page Source. 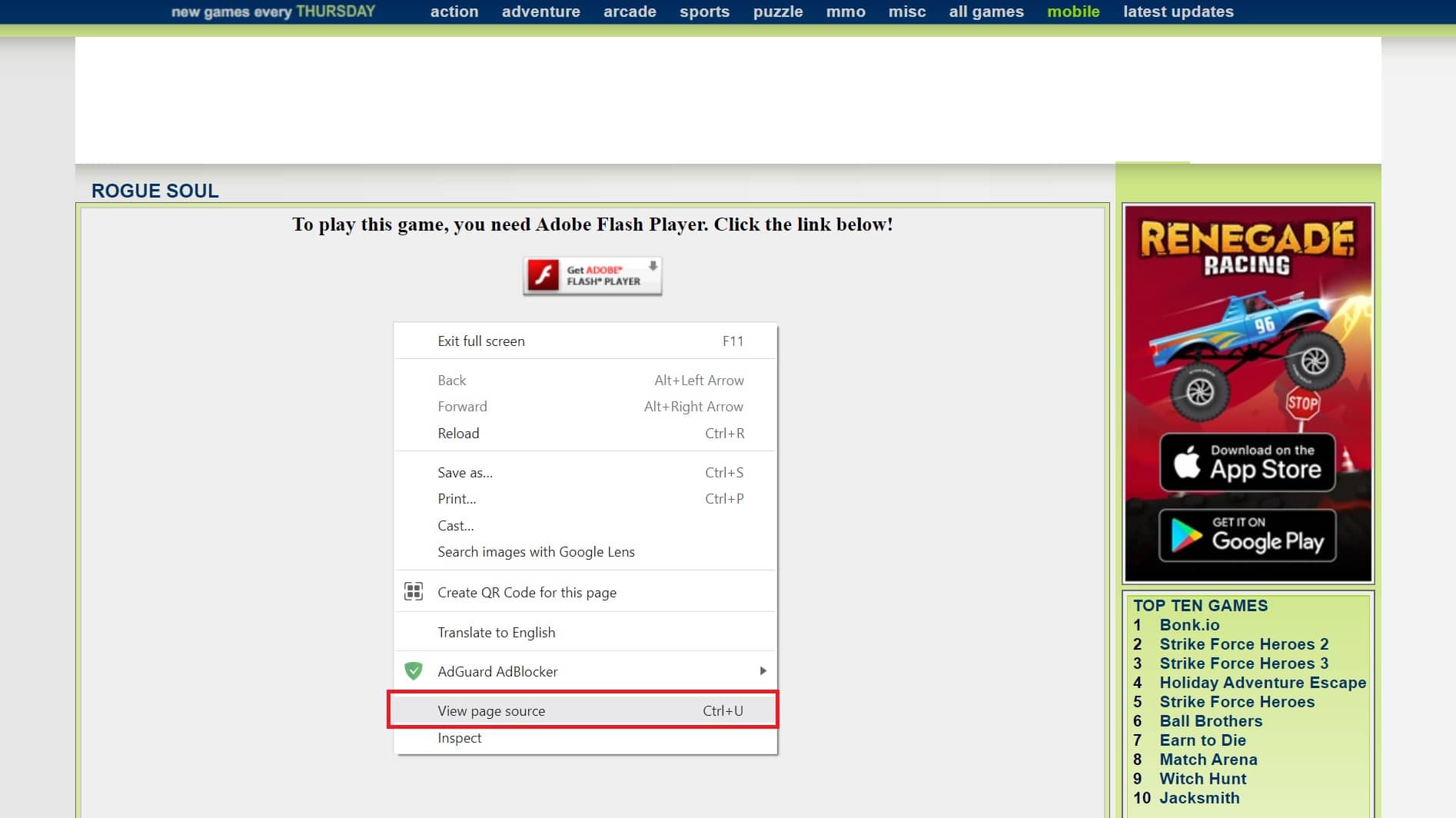 By hitting CTRL+F (find) and typing “.swf,” you can search for files with the SWF or Shockwave File extension. This will typically take you to a hyperlink for the file itself encased in an HTML VALUE element. Since the file would typically contain the game’s name, it should be simple to identify. Copy the link, then paste it into the address bar of your browser. The file will either start downloading instantly or open a screen with an object you may right-click and download, depending on the browser and its settings. 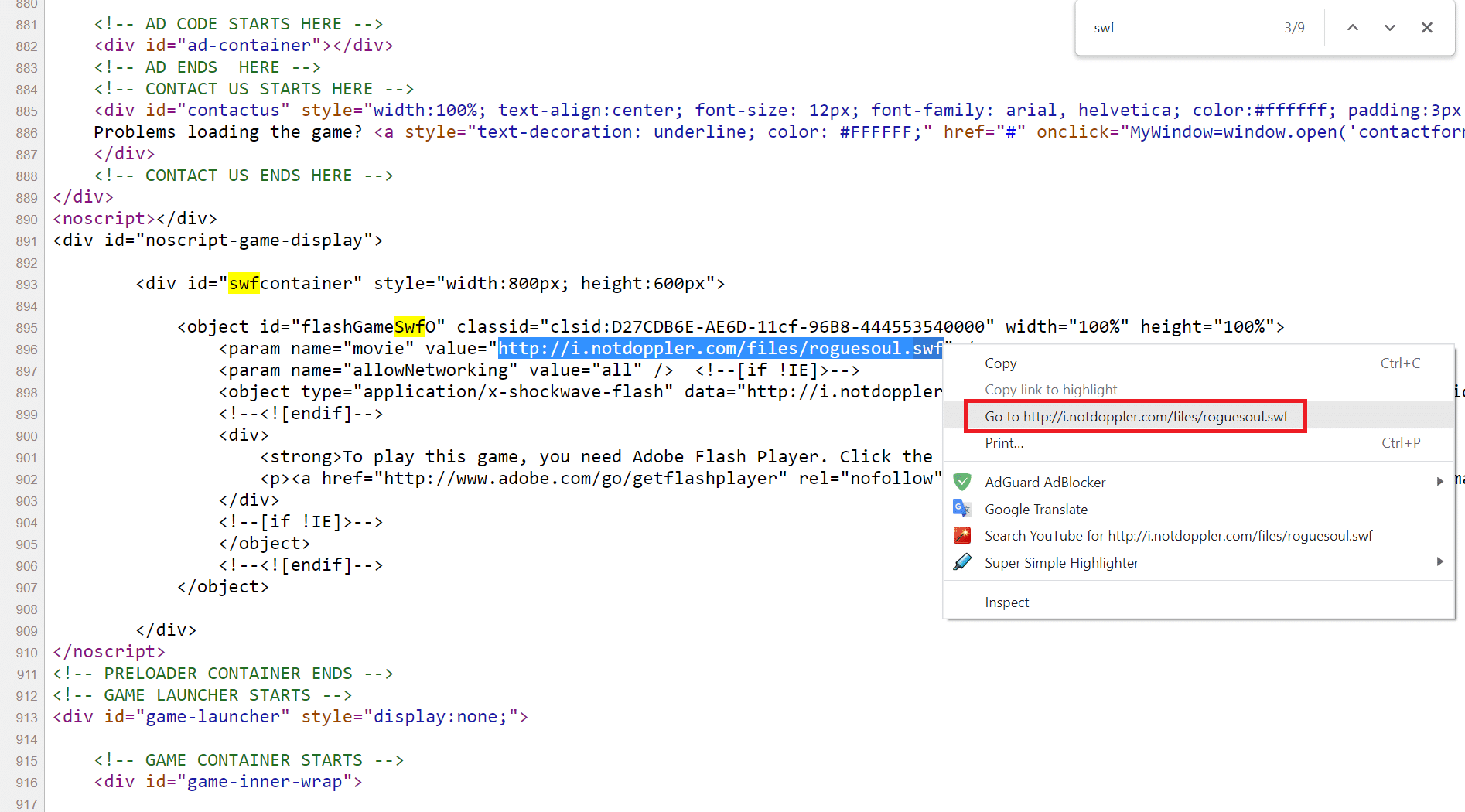 How the game is played offline? Now that you have both necessary components. Using the Flash Player Debugger is the simpler approach. The software will launch by just running the file. Open by selecting File from the main menu. The filename of the SWF file will be requested. Play the game by loading the game’s file. 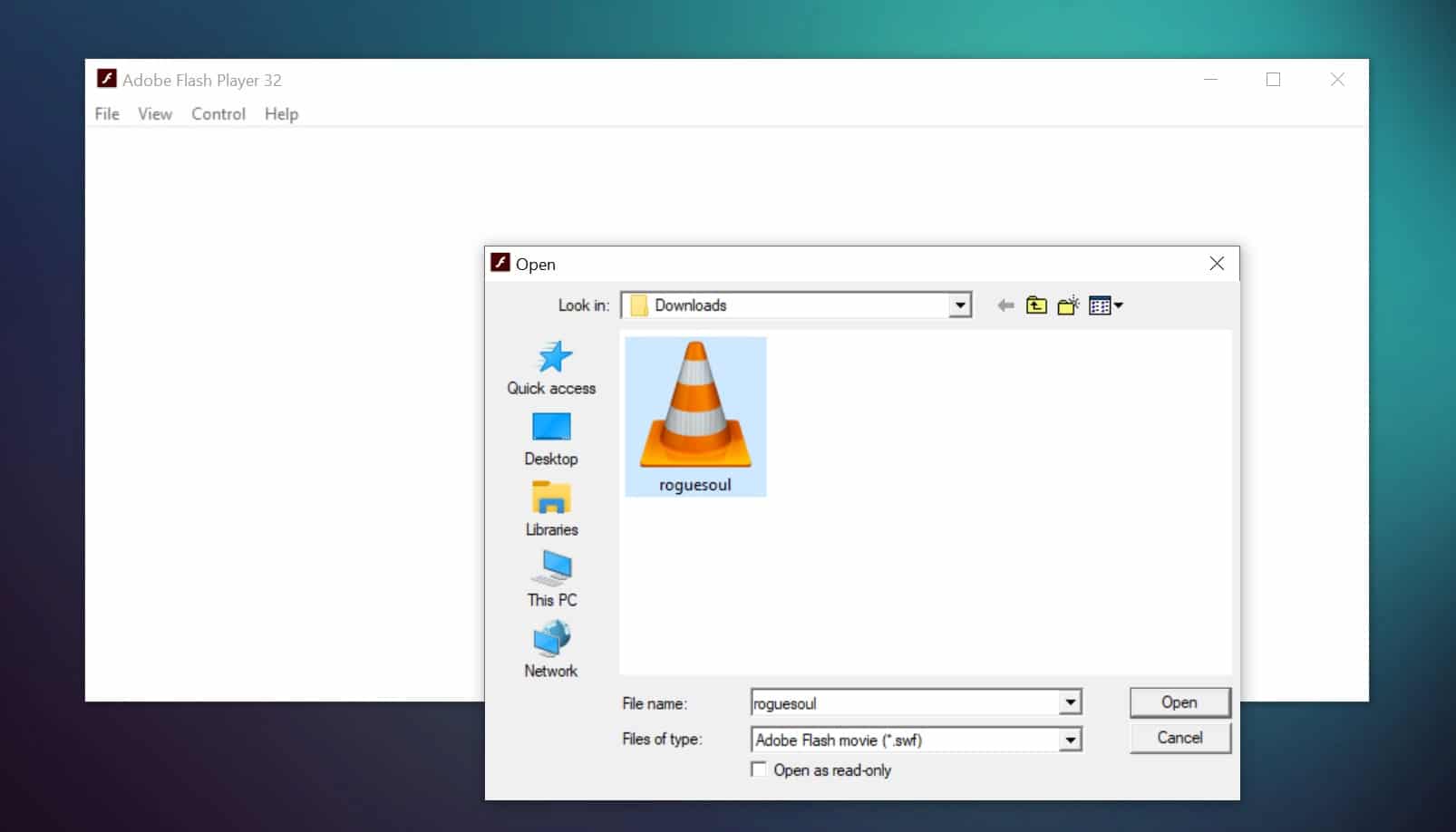 To play other Flash games, just repeat steps 2 through 4. If you want a particular favorite game, you can search the same website for additional Flash games. If not, there are plenty of websites with their repositories. Such people will attempt to use a Flash emulator to play the games, however, some implementations might not work perfectly and would still need an internet connection. The best and safest option would still be to complete this offline.

Where Can I Play Flash Games for Free?

You may get more Flash games from these websites…

☞ NotDoppler.com – where we got our example, which hosts several other Flash games. And since Flash games are relatively easy to create, new games will occasionally pop up. 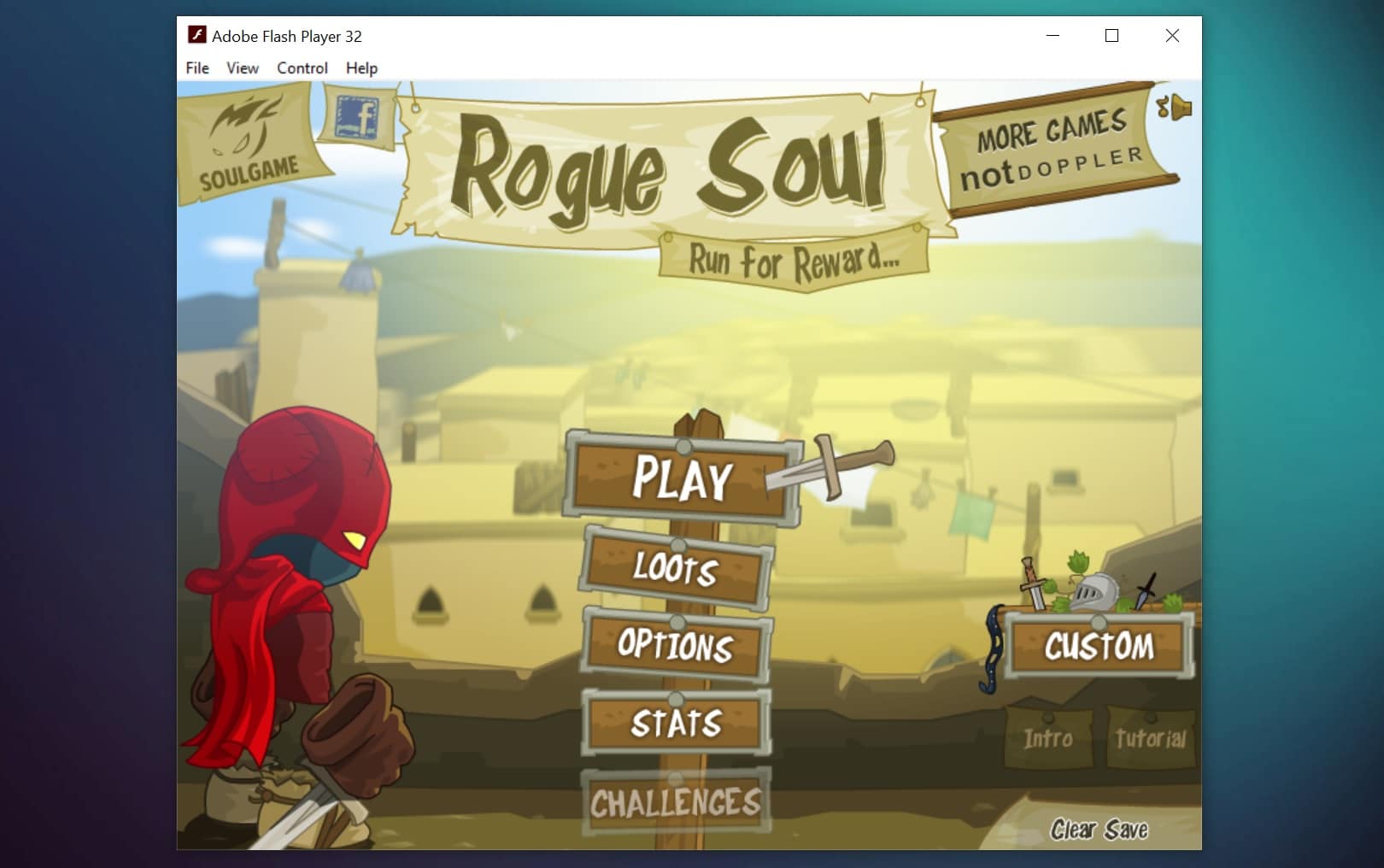