“A business without a sign is a sign of no business,” which is completely true. A good business or brand requires a good logo for differentiation and recognition. Logos are usually created by simply drawing the concept graphically and then bringing it to life through artisan means. Nowadays, it’s done using desktop design programs. But one can also design a good logo using Android. This time, we discuss the 10 best free logo maker apps for Android.

Are Android devices good enough to make logos? The answer is yes. If users can continue to create interesting effects on their pictures and videos, logo creation should be child’s play. Technically, any doodle on any drawing app can be considered a logo. And what better platform can creative minds quickly put their ideas on while on the go – Android. However, it would be helpful to know a bit about logo creation basics. There are plenty of YouTube videos for that. So, without further ado, here are what we consider to be the 10 best free logo maker apps for Android.

You may also like: 8 Best Free Watermark Apps for Android 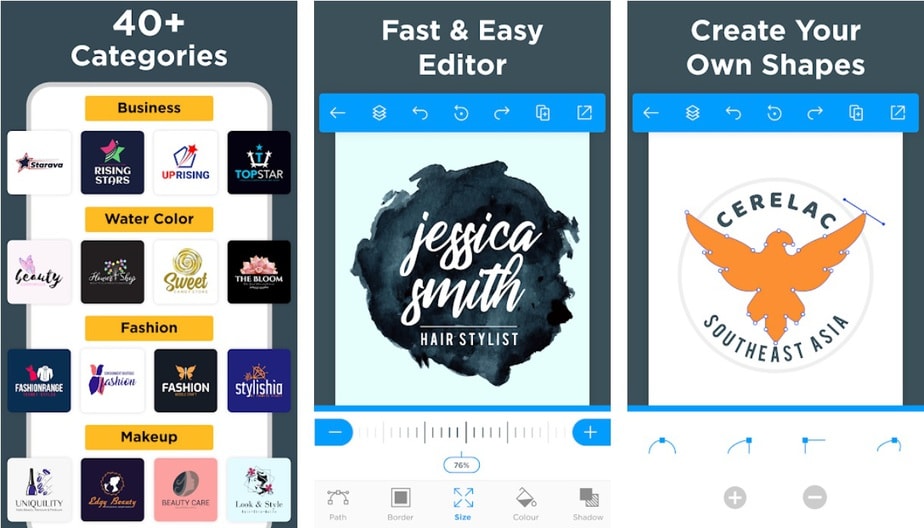 The aptly and not so imaginatively named Logo Maker – Graphic Design & Logo Templates from Content Arcade Apps is a popular enough app to add to this list of the 10 best free logo maker apps for Android. It has over 10 million downloads, and even if half of them become active, that’s millions of people who have had their business and brand logos made with this app alone.

Logo Maker has thousands of available logo templates nicely categorized by fields such as business, sports, education, food, and lifestyle. These templates can easily be customized using hundreds of stylish fonts, which can easily be resized, along with shapes, backgrounds, and overlays. Logos can be exported in high-resolution PNG formats. The downside of being free is that the app will display ads, and some content will only be available upon purchase, but there’s still a lot that can be done with what’s already provided. 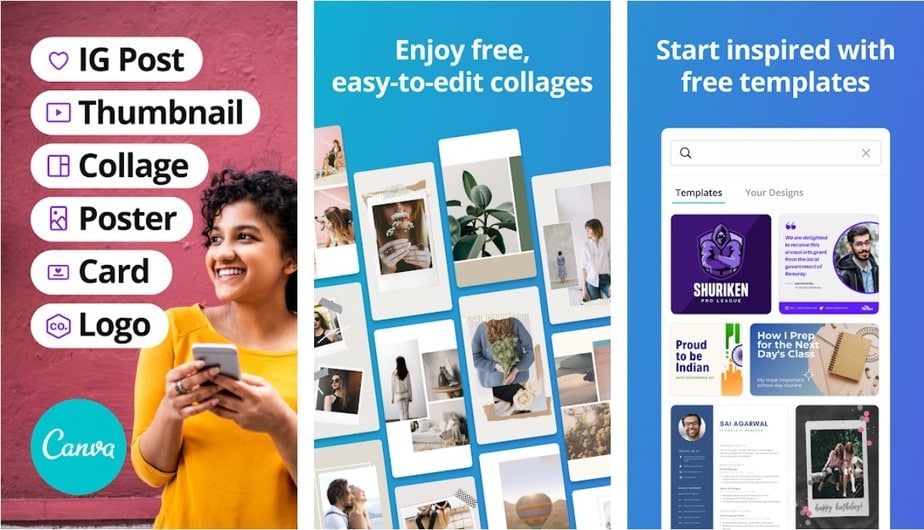 Canva is perhaps the most popular logo-making app available for Android. There are many logo design lessons on YouTube centered around or using Canva. Canva has over 6 million reviews on the PlayStore, not counting those that have not reviewed the app. Logo making is actually just one of Canva’s functions as it’s used to edit photos, videos and create business cards.

Canva can be used for logo making even for those without knowledge of logo design, thanks to thousands of free logo templates which users can manipulate and add to and create their own unique business or brand logo. Fonts, shapes, and colors of these templates can be easily manipulated, thanks to Canva’s great implementation of drag and drop as well as having a categorized and intuitive interface. There are tons of features on the free version, but if you want to get serious, more features are available on the pro version. 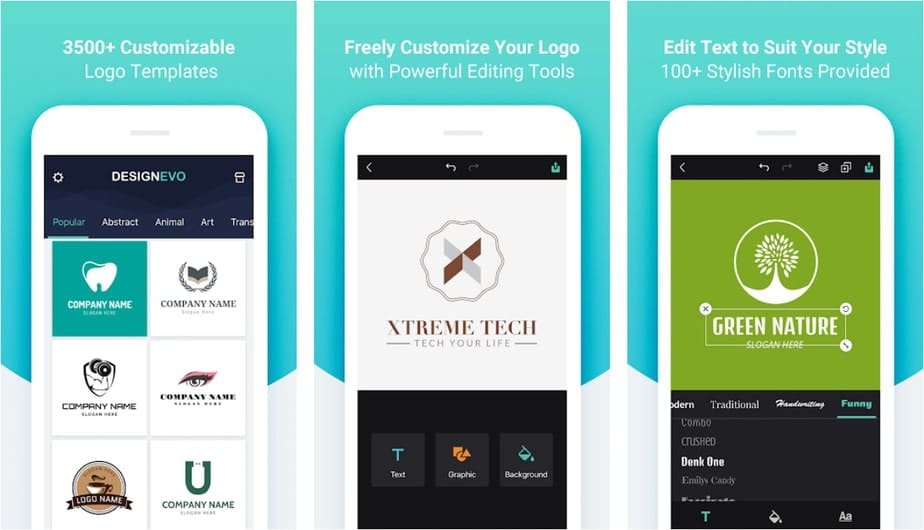 DesignEvo is free to install from PearMountain Technology Limited. Its distinguishing feature among these free logo maker apps is its simplicity. DesignEvo is lightweight at just 27MB, and features can be added with some in-app purchases. But what’s already included should be enough for the casual business owners who need a simple logo for their brand or business.

Features include over 3500 professionally designed logo templates sorted into various categories that should suit everyone. There are also plenty of preset graphics included or can be added to those logo templates. Other features include layered editing, multiple undo, opacity and color adjustments, and the ability to save to JPG and PNG formats. The app itself is very easy to use. 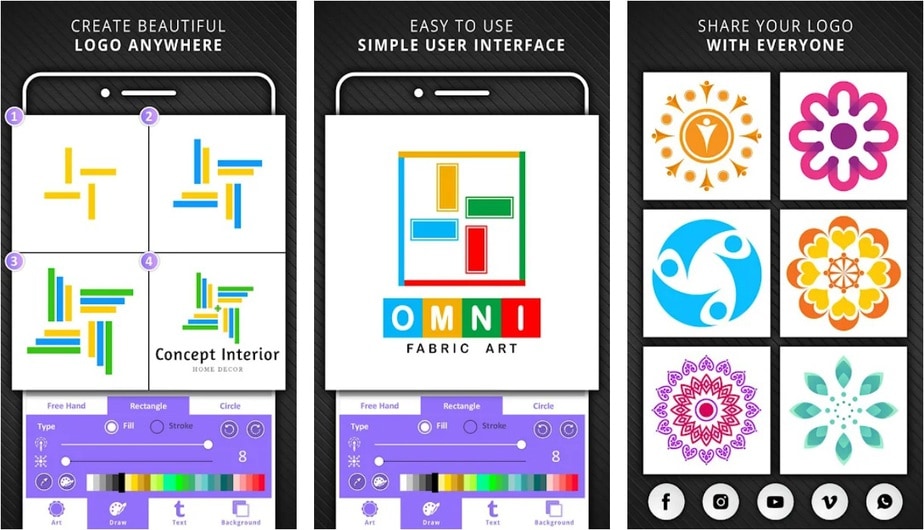 As the name suggests, this app is specifically for logo making and design. It’s by far the lightest app on this list at 8.5MB. That size can be added to through in-app purchases. Like DesignEvo, logo design with this app is simple and straightforward. Swift logo Maker and Designer can design cool logos and backgrounds by capitalizing on spiro-graph art to create trippy psychedelic logos that, when done right, are eye-catching.

The downside to being completely free is that your logos will bear a watermark, which can be prevented by watching an ad every time or going premium. Features aside from the unique spirographs are that users can add freestyle drawings, layer editing, plenty of fonts to choose from for text elements, and a broad color palette. The interface is simple enough to allow users to create a logo in minutes or keep the kids busy making spirographs. Swift Logo is for you if you’re into fast and trippy logos.

Iris Studios Logo Maker is popular enough to have over 10 million installs and at least twice the logos created and used. It has a simple interface which makes it very easy to use. Users can come up with logos in no time or have one designed for them based on some simple entries.

As mentioned, creating a logo from scratch is pretty easy. However, there is a limited selection of art to choose from, which necessitates an in-app purchase of a monthly or lifetime purchase of $20. Locked art can be used once after the user watches an ad. Also, like Swift Logo Maker, free logos will have a watermark unless the app is purchased or the user watches an ad.

Users can also have their logos designed for them after choosing which industry the logo will belong in, entering the company name and tagline. Users will then select the font category to be used. The app will then come up with not just one but several choices. Overall, Iris Studios Logo Maker is simple, easy, but limited, yet a pretty inspiring logo design app. 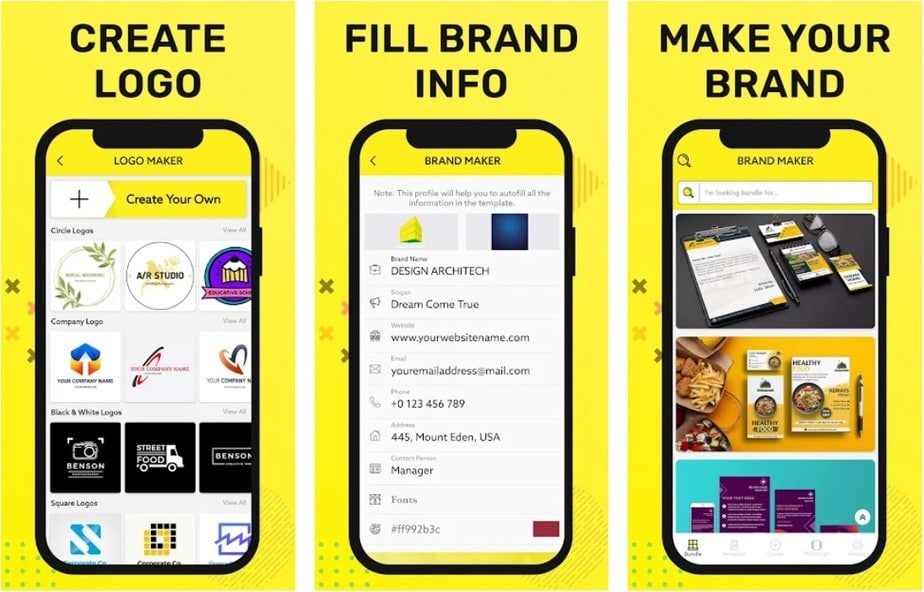 Brand Maker is quite appealing not just as a logo maker but as an all-around graphics design app, especially for social media. Let’s talk about the downsides first, but once you’re okay with them, this app has plenty of potentials. First, this app is quite minimal at just 14MB, probably because there’s not much pre-loaded content in the first place, but just enough to create good logos and all-purpose graphics. The second downside is that it will push ads in almost every step of the way.

The potential, however, is appealing enough to make it one of the best free logo maker apps for Android. Sufficient to purchase Brand Maker outright, especially for social media users. The logo-making section is easy enough to use, and once the user is done with the logo, it can then be used with the app’s other functions like creating YouTube thumbnails, Pinterest pins, and Twitter graphics. Despite the shortcomings of the free version, Brand Maker has plenty of good reviews. 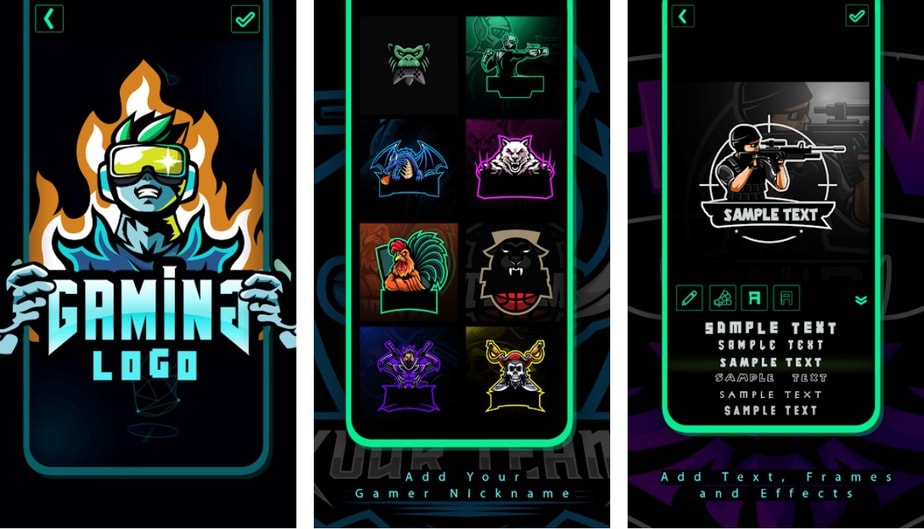 Gaming has definitely grown into a lifestyle as well as a source of income, not just for developers and distributors but for teams of pro-gamers and game streamers. Many of those mentioned have made companies and brands for themselves, and there are plenty of others just waiting for the perfect app to create the perfect gaming logo.

Gaming Logo Maker is a free, specialized logo-making app for those in the gaming industry. Gaming logos have to look cool and edgy to appeal to the current generation of gamers. Gaming Logo Maker has such templates. There are dozens of base logos to choose from as well as some backgrounds. Additional logos and backgrounds can be unlocked by watching ads.

Making cool gaming logos using this app is easy enough in a seemingly step-by-step process of selecting the background, the cool logo graphic, additional personal image, and logo text. One downside is that replacing an image or text element would require a do-over as users can’t remove an element if they have already passed the step. But, other than this, creating a cool gaming logo can be done in no time. 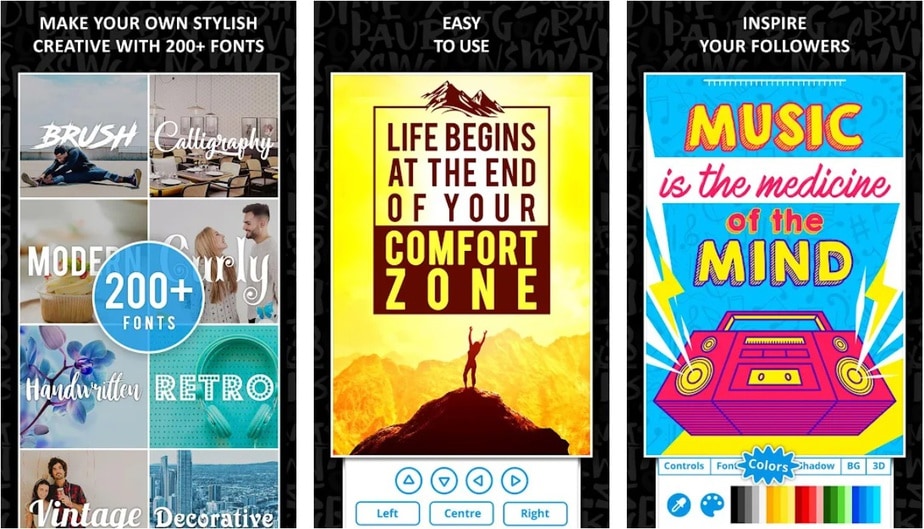 Despite the name, Font Rush is not at all about font or text logos but is actually very graphical and colorful with several beautiful categorized images to choose from, aside from allowing users to use their own images. The free images are amazing, however, quite a few. Unlocking the others would require getting a subscription or watching an ad. After selecting the image, then comes the fonts, with hundreds to choose from and later manipulate.

Aside from logos, Font Rush is great for creating flyers, brochures, and posters. The interface is quite similar to Iris, so Iris users can feel at home with this app or vice-versa. Font Rush is simple and easy to use and, with over half a million installs, earns a place on this list of 10 best free logo maker apps for Android. 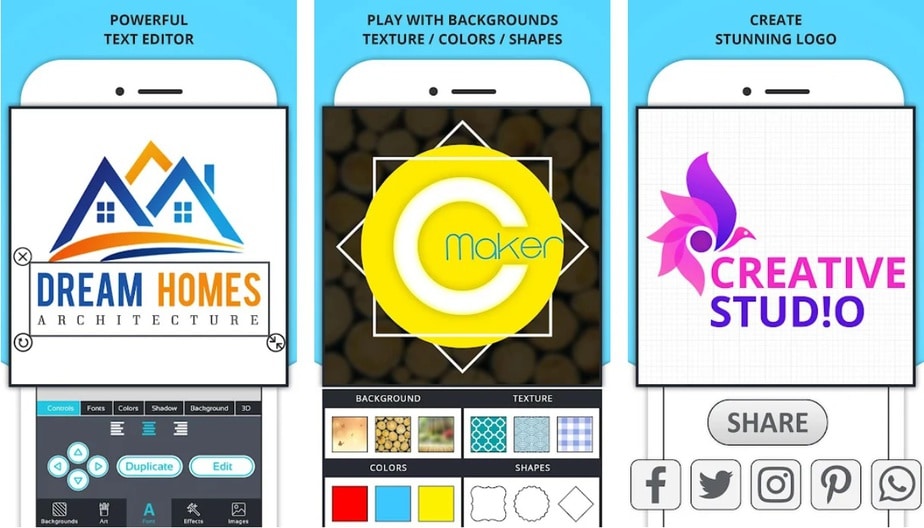 Logo Maker by Z Mobile is quite similar to Font Rush’s interface. In fact, several logo apps we viewed before coming up with this list have almost identical interfaces as if they either copied each other or there’s an open-source logo app out there that some apps are based on. However, this offering from Z Mobile has some unique clipart and categories, but many are similar to the Iris library. Like Iris, this app also lets users choose from categorized pre-made designs instead of selecting the category. The two apps operate quite the same and, at over one million downloads, is a good competitor to Iris and also has good reviews.

Logo Maker Plus from Logopit is another simple and great logo maker app. As the name suggests, it does more than just logos. It can also create graphics for other purposes such as flyers, infographics, mini-posters, web, and social media graphics. The app is also very easy to use and quite straightforward. Choose a graphic, choose a color, choose a text, manipulate font and color, choose a background, make adjustments, and save. Logo Maker Plus makes it to this list of 10 best free logo maker apps for Android, thanks to its simplicity. Never mind that it has over 10 million installs with over 90% positive reviews.

The downsides to the free version, however, are the ads that suddenly appear mid-use, and that it has no pre-designed logos to choose from and modify. In contrast, the other options like flyers and YouTube thumbnails have plenty to choose from, making it popular, at least for other uses.

Whatever the use, these ten free logo maker apps for Android will be awesome if you’re out to start a new company, change your logo, or make a brand of yourself on social media. They’re free, but they’ll want you to buy pro features. So resist the temptation because many are as good as they are.