The Samsung Galaxy A12 enables its users to capture images displayed on the screen or better known as screenshots. This is a functionality that all the leading smartphones in the market today contain. Taking screenshots is one of the most important and widely used features of smartphones. It is an amazing way to share images with another end-user. In actuality, screen captures are not only practical but also innovative for accomplishing more work quickly.

If you are presently owning a Samsung a12 phone then you might have wondered how do I take a screenshot on my Samsung a12. Fortunately, the functionality of being able to screenshot on a Samsung a12 comes with the Android 10 operating system, so you don’t need to download any other apps. Although there are effective and powerful apps that can help you in taking screenshots on your mobile phones, Samsung Galaxy A12 lets you do it without having to install third-party programs.

How do you Screenshot on a Samsung Galaxy A12

On the Galaxy A12, Samsung has provided three distinct ways for consumers to take screenshots. These methods are easy and fail-proof. We have put in this article all the steps on how to take a screenshot on a Samsung A12.

First Method: Take a screenshot of a Samsung A12 using Hardware Keys

The first technique, which is also the most widely used, involves hitting two hardware keys simultaneously in a conventional manner. This works by utilizing the physical keys on the phone’s side. These keys are the power button and the volume keys.

Take hold of your phone and simultaneously push the power and volume down buttons. Wait until the screen flashes white before releasing the keys. This denotes the taking of a screenshot.

A little menu bar will appear at the bottom of the screen after the screen goes white. There will be three buttons on the menu. The image editing and cropping button are the first ones. The third button allows you to post the picture on social media, while the second button enables scroll capture. 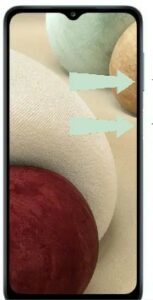 This method, simply put is child’s play. However, there should be proper timing when pressing both keys altogether. Because when you cannot do so, either the volume will tone down or the screen will turn black if you only press the power key.

Second Method: Take a screenshot on a Samsung A12 using Palm Swipe to Capture

You need to go to Settings, and then look for Advanced Features and then go to Motions and Gestures. There will be a Palm swipe to capture option available. It is by default turned off. To enable it, click on it. Now use your hand to screenshot the screen quickly. It involves moving the hand’s side palm from the right side of the screen to the left side or vice versa. The phone will vibrate to let you know when the task is finished. 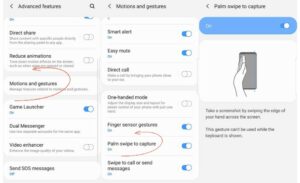 Having to capture the image on the screen by just swiping your hands is not rocket science. Thanks to the Samsung A12’s Palm Swipe to Capture feature. Now, users can quickly share anything they want by the power of their palm.

Third Method: Take a screenshot on a Samsung A12 using Assistant Menu

Another method to try if you need a solution on how do you take a screenshot with a Samsung a12 is through using the Assistant Menu. The Assistant Menu allows users to access hardware buttons and any other parts of the screen display by quickly swiping or tapping. Taking a screenshot by utilizing this feature is relatively easy. 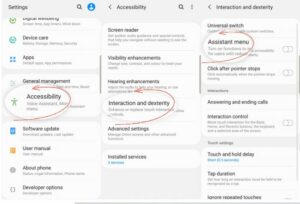 Originally, the Assistant Menu is designed for users with physical impairments. But it can aid in accessing through the mobile phone.

There is no other way to capture mobile screen displays and images than to take screenshots. Because screenshot is among the most utilized digital activity, it is just right that taking them is fun and easy. We hope that all the methods we have shared on how do I screenshot Samsung galaxy a12 will be helpful to you as it has been to us.