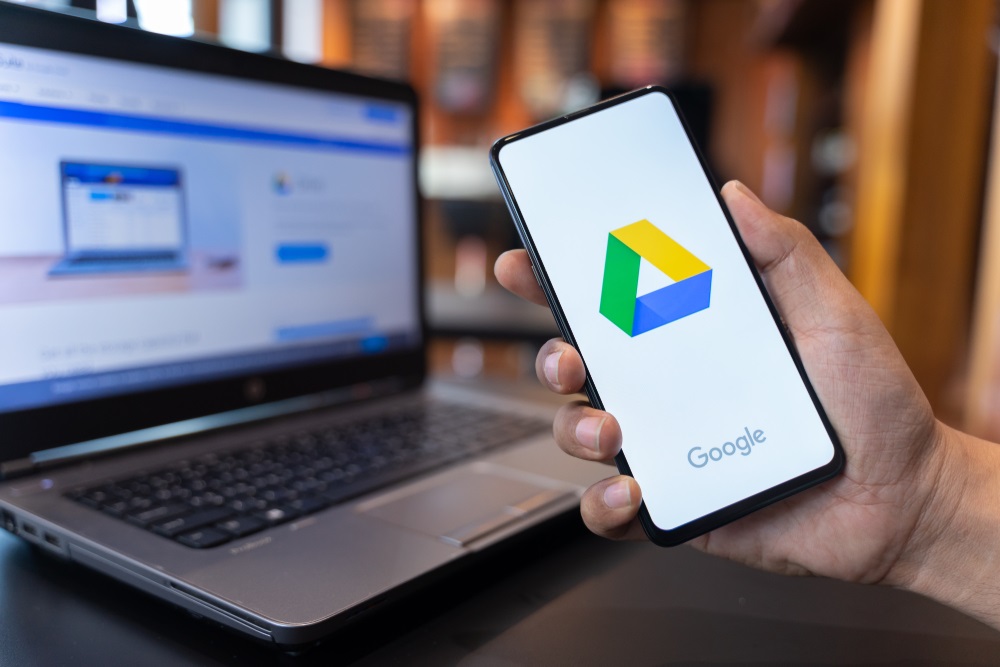 Because SSD storage remains expensive per gigabyte, and most computers can no longer do without them. This results in many affordable laptops with SSDs but limited storage. To get around this, users can rely on cloud storage services such as Dropbox, OneDrive, and Google Drive. Many prefer Google Drive. However, Google Drive only offers 15GB of free storage and only allows one account active per session, and switching between accounts can get quite tedious. So, in this lesson, we’ll show you how to add multiple Google Drive accounts to one Computer.

Knowing how to add multiple Google Drive accounts to one Computer will allow users to conveniently use more than one Google Drive on one computer and use them simultaneously. Google normally doesn’t allow multiple instances of Google Drive on the same computer. If you want to use another account, you’ll have to log out of one Google account and then use another. As mentioned, using multiple accounts can increase a user’s limited storage, or the user needs to alternate between personal and work-related storage. But follow these instructions carefully, and you’ll be able to run multiple Google Drive instances simultaneously without issue.

It’s amazing how developers can anticipate issues or such a requirement like allowing for multiple Google Drives on one PC. There are apps out there that are available, but if you have trust issues with third-party apps, it is possible to limit this to just between Google and Windows.

In case you don’t have other user accounts on your Windows PC, let’s create a sample. Go to Settings. Then click on ‘Accounts’ and then ‘Family and Other Users’. Look for “Other Users” and click on it. Select ‘Add Someone Else to this PC’. Microsoft will ask how the person will sign in. We’ll only be creating local accounts so click on ‘I don’t have this person’s sign-in information’. The Create Account screen will appear. Choose ‘Add a User Without a Microsoft Account’, and then set your username and your password for the user account. 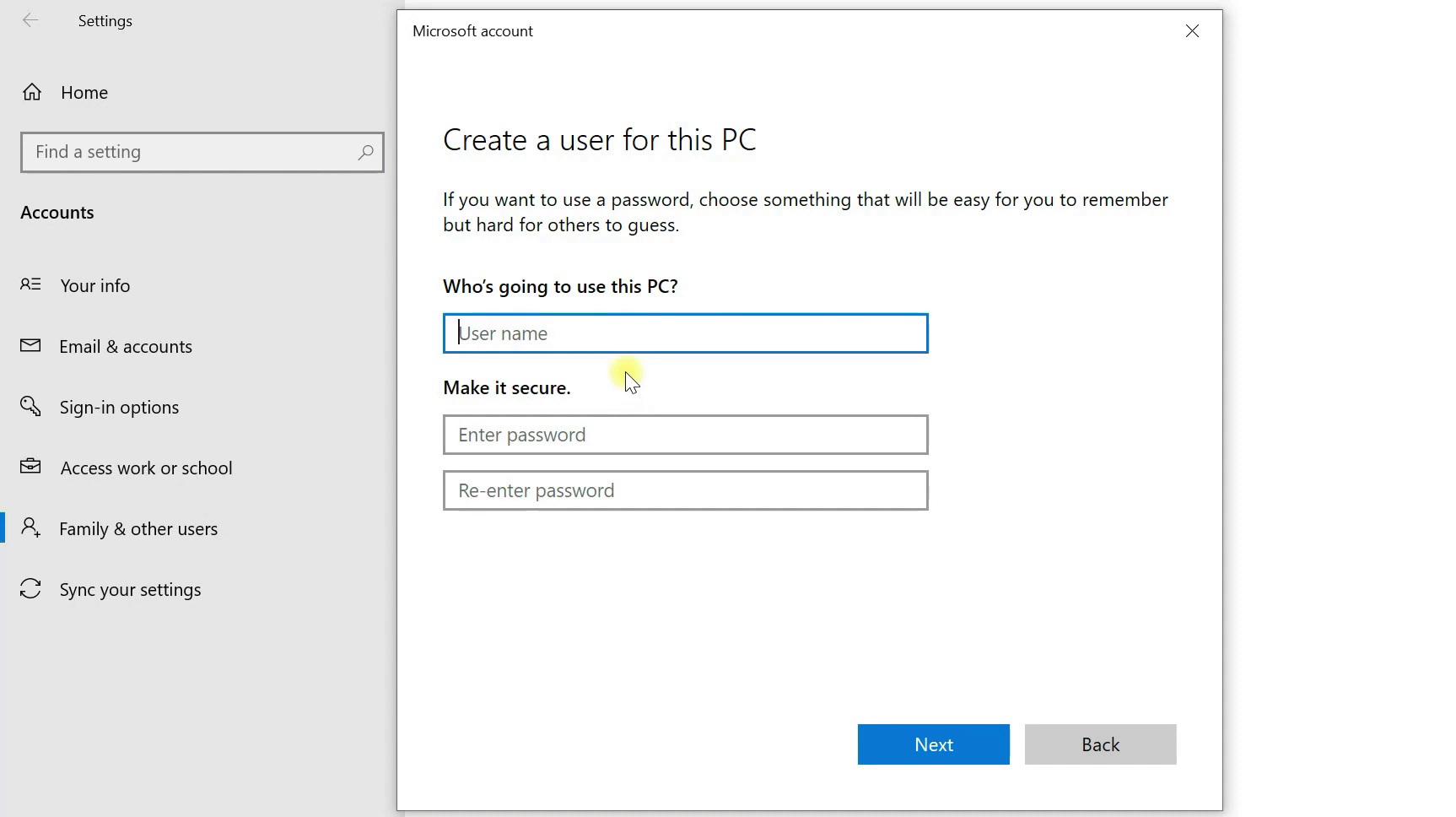 Step 2: Open another instance of the Backup and Sync app

Press Start, and search for Backup and Sync, right-click on it and select ‘Open file location’. Hold down the Shift key on your keyboard and right-click on the app shortcut. Then click on Run as Different User. Enter the log in details for the new user profile you just created. Another instance of the Backup and Sync account will activate. 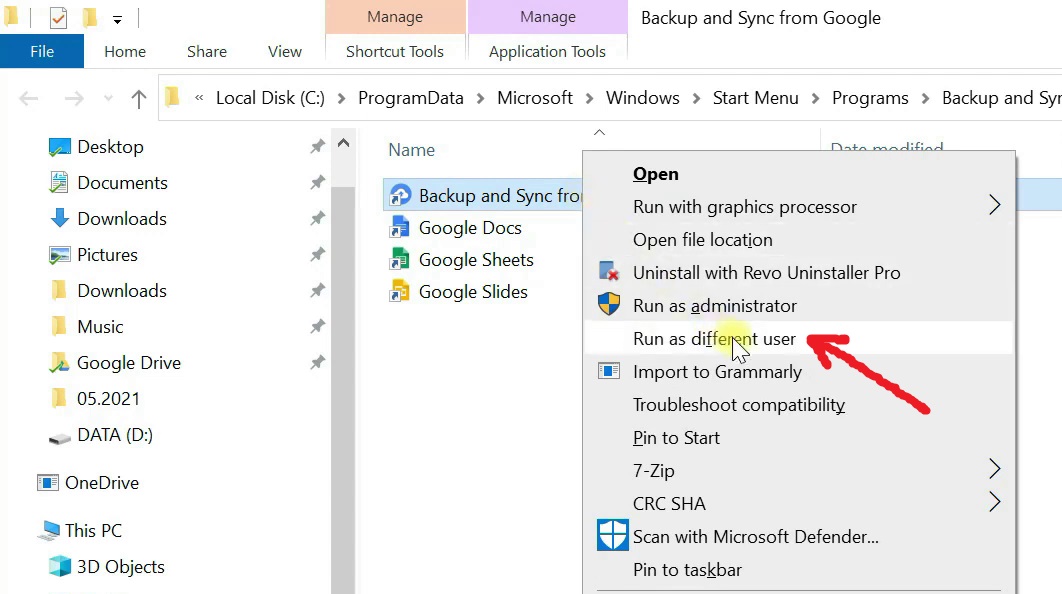 Step 3: Add your other Google Drive account to the 2nd instance

You’ll see another icon in the taskbar. Open the second instance and sign in with your other Google Drive account. Once you’ve finished setting up, you can now access two Google Drive folders.

However, once you restart the PC, the second drive won’t run automatically. You’ll need to repeat steps 2 onwards to regain access to your other Google Drive. To add more Google Drive accounts, repeat the process from step 1.

There is a degree of tedium when it comes to the first method, especially if you use multiple Google Drive accounts and for some reason have to restart your computer. By using a third-party app, things could go a little smoother. In this lesson, we’ll be using Wondershare InClowdz. No need to worry much as Wondershare has been in existence for a long time, producing useful utilities. With Wondershare InClowdz, you can easily access all of your Google Drive accounts on the same computer.

① First, download and install Wondershare InClowdz on your PC.

② In the Management tab, add all of your Google Drive accounts and authorize them. You can see that Wondershare InClowdz also supports Dropbox, OneDrive, Box, Google Photos, and iCloud. If you also use the others, feel free to add them later. 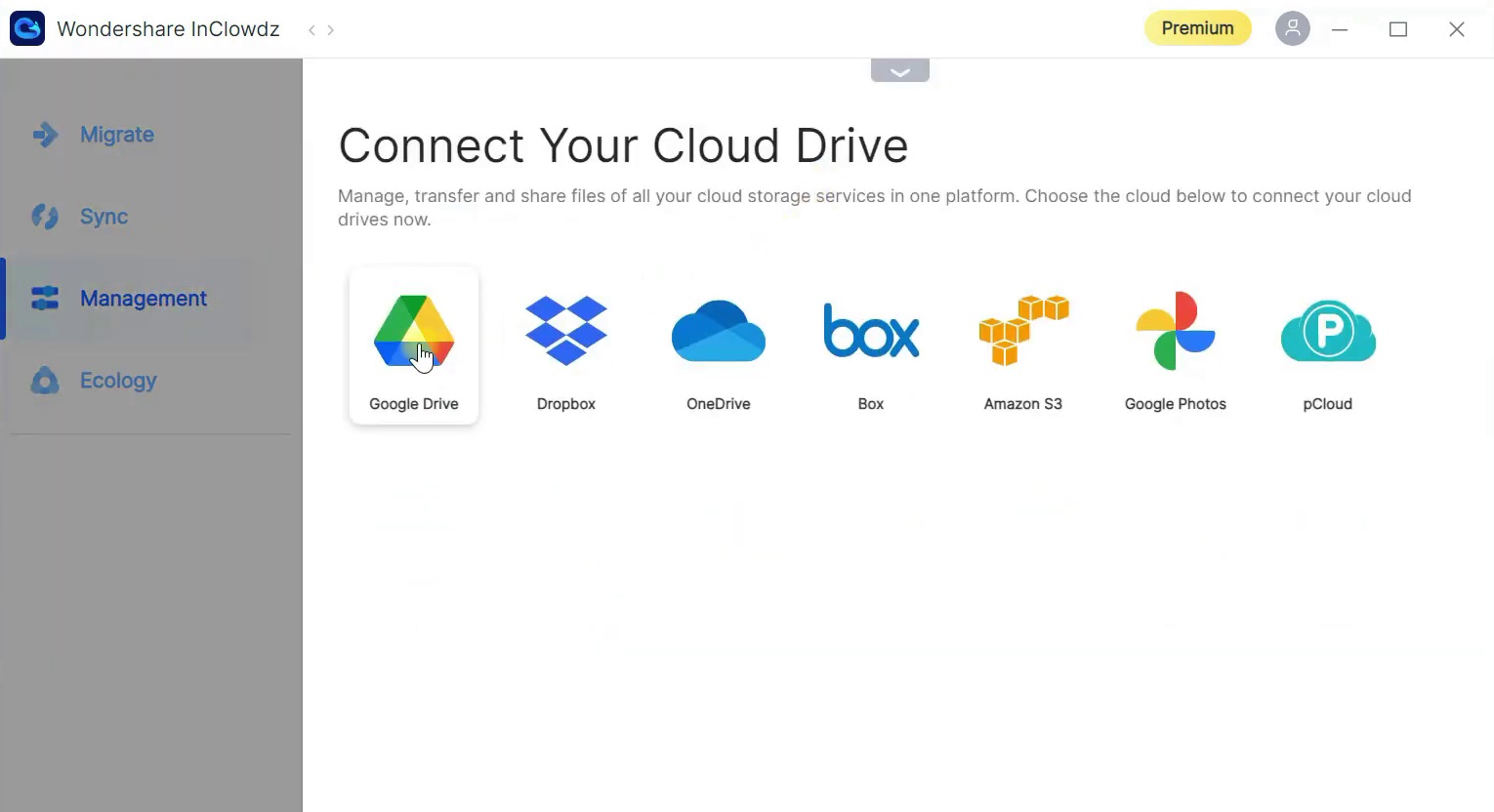 After adding, all your Google Drive accounts should now be in one place. You will now be free to upload and download files from any of your Google Drives without having to create multiple Windows accounts. 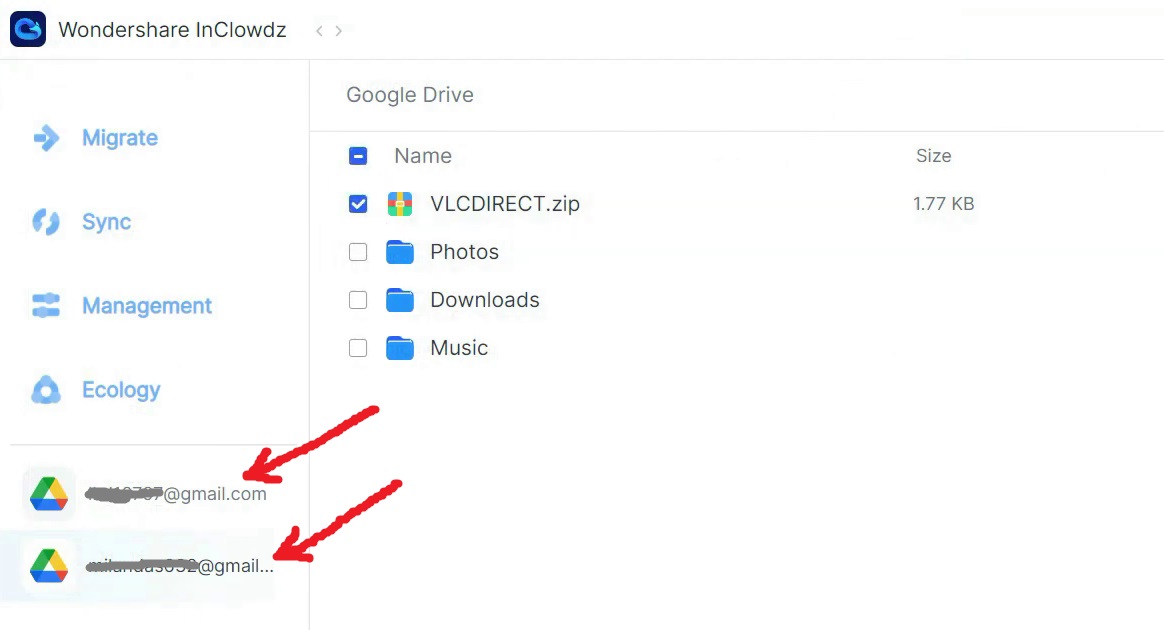 The downside to this is that the drives won’t be linked to File Explorer, and you will need to do your file management through Inclowdz.

Unlike on Windows PC, managing multiple Google Drive accounts on Android is very simple. Open the Google Drive app. Tap on the upper-right icon on the screen. Tap on Add Another Account. Sign into your other Google accounts. After signing in to the accounts, you will be able to access your Google Drive files by switching the accounts by tapping on the same icon. 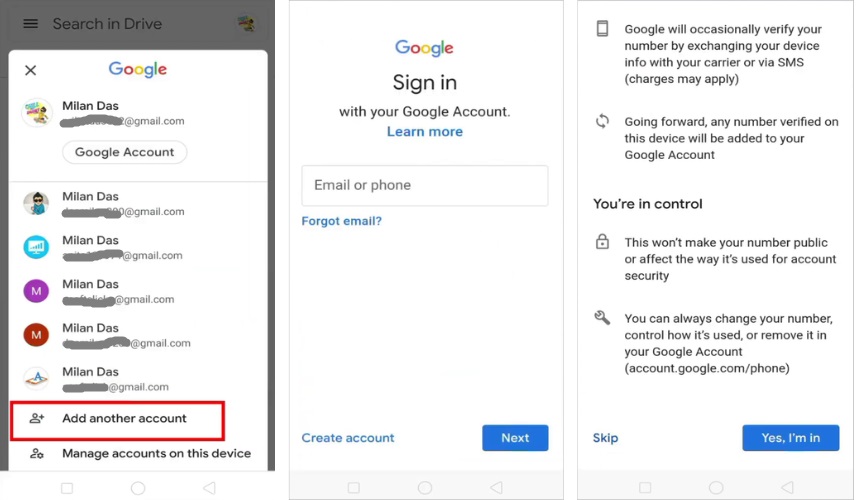 ① You can also install a third-party app to better manage your Google Drives. For our purposes, install the app File Manager by Lufick. Like Inclowdz, this app also supports multiple cloud storage services on one device.

② After installation, tap on the main menu, which is the burger menu on the upper left corner of the screen. Go to the Clouds section. Then click on Add Cloud Storage. 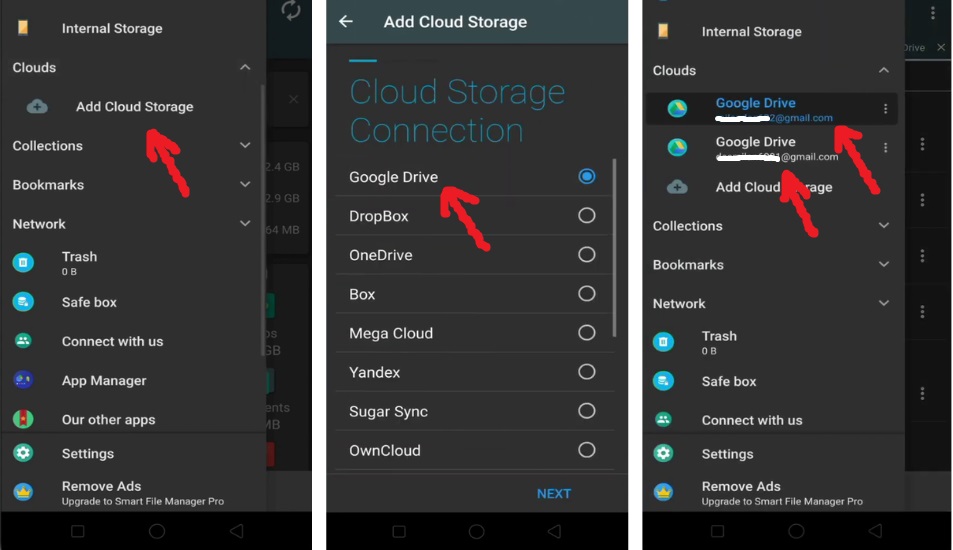 ③ You can add all of your Google Drive accounts here. It will ask you to log in to a Google account per drive. After logging in, tap on Allow to allow file access on your device.

④ Repeat the process for subsequent Google Drive accounts. Once done, you can view and manage your files from a single interface.