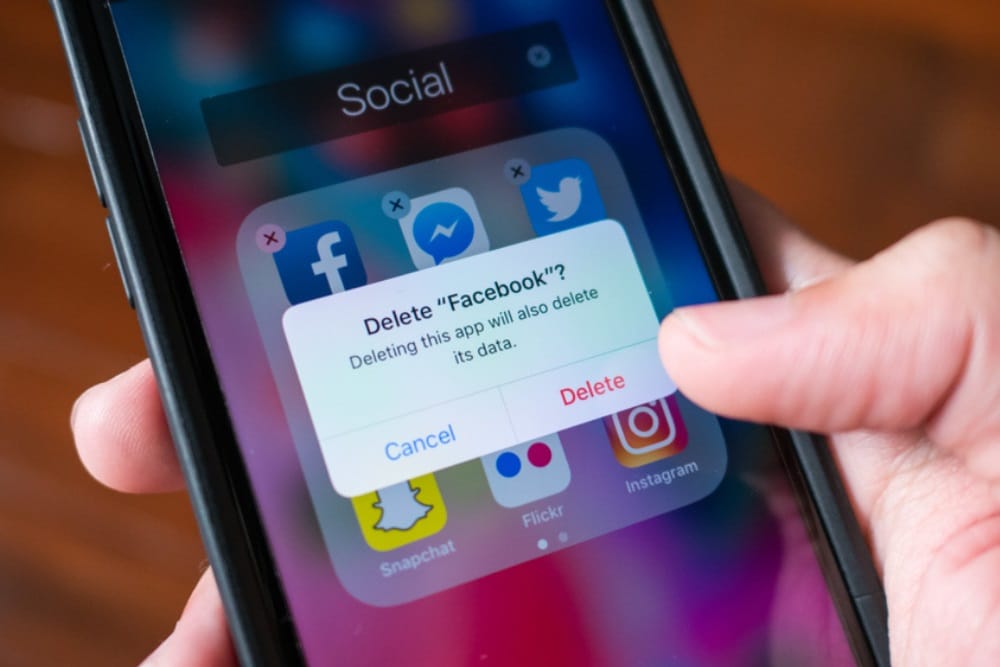 There are times when users become untethered from their phones apart from sleeping or showering. Nowadays it’s rare, but it happens. The phone becomes vulnerable, and others might pick up the phone and mess with it especially if the phone isn’t password or PIN protected, leading to viewed personal data, deleted data, or uninstalled apps. Therefore, it’s important to know how to prevent apps from being deleted on Android. This time let’s discuss how to stop apps from uninstalling.

Yes, there are still plenty of users too lazy to use PIN security or any sort of phone locking facility. Other users meanwhile have easy to guess PINs. Phones are picked up, unlocked, and played with, resulting in broken phones, weird settings, and deleted apps. App deletion can happen unintentionally by kids and non-techies or maliciously by strangers and prankster colleagues. This is often a pain to remedy. This also happens when kids, family, and friends, borrow your phone and somehow inadvertently uninstall phone apps just by holding onto the screen for too long while distracted. So, after a painful lesson of reinstalling an important app, knowing how to secure and prevent apps from being deleted on Android is a must.

As an added bonus, this method on how to stop apps from uninstalling can also help customize phones and tablets for company use especially on the shop floor, inventory, safety, and other field purposes; to display and secure only a specific set of apps. So, this is a good topic to learn.

How to Prevent Uninstallation of Apps on Android

Read carefully as the method on how to prevent uninstallation of apps could get a bit technical, but still relatively easy. But, if you’re particular about how your home screen looks, this may or may not be for you, as this method will require a separate launcher app called Nova Launcher. However, if you’re using a Samsung phone, you don’t need this app. The app we will be using will be at home with Samsung’s One UI Home Launcher.

① Download and install the app called Applock by DoMobile Lab. It allows users to lock specific apps by password, so unauthorized users can’t open apps without knowing your password. It can also help you to prevent apps from being deleted on Android. But do not run it yet. 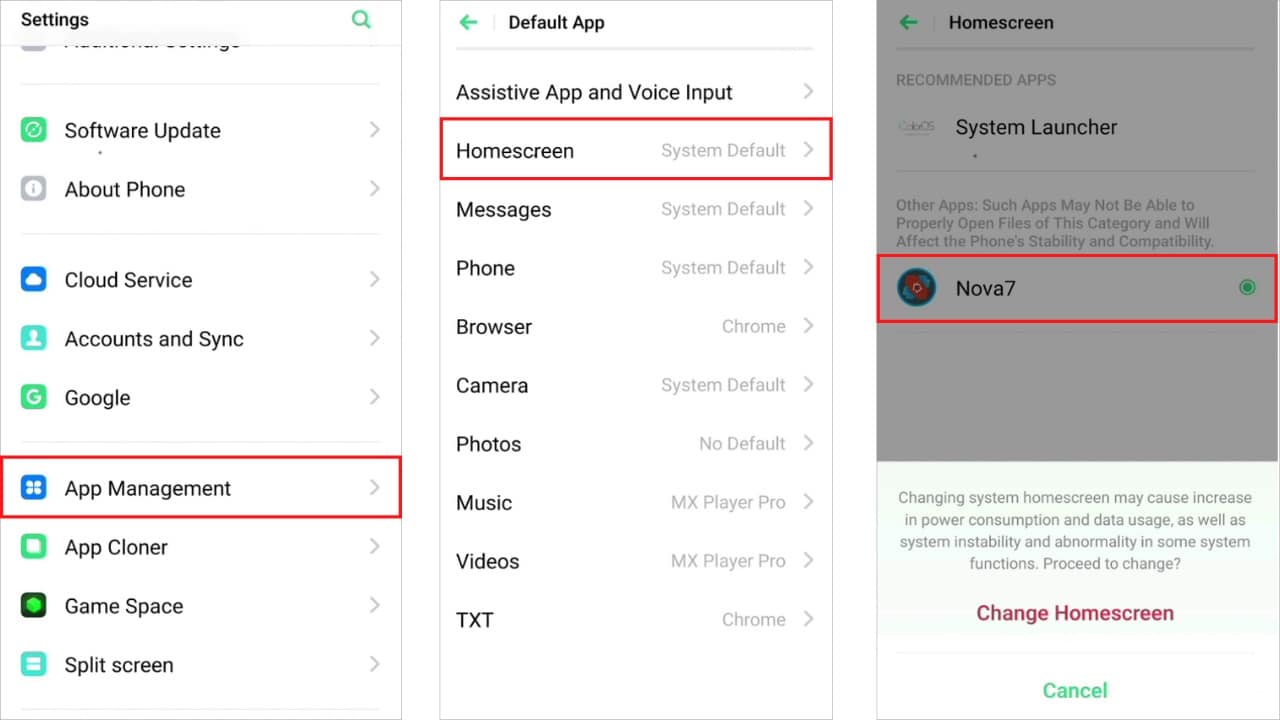 ③ Once done, launch Applock. Applock will first ask you to set a security pattern. Create a pattern that’s easy to remember. The pattern will become your default password. You’ll then see the list of apps installed that you can secure.

④ Scroll down and select the app you want to secure. Since this is the first time using the app, and because app maintenance is an Android system function, Applock will ask for security permission to perform the task. Grant the permission. Applock will then also ask permission to draw over other apps. Choose Ok and the floating windows management screen will pop up. Also set to enable. 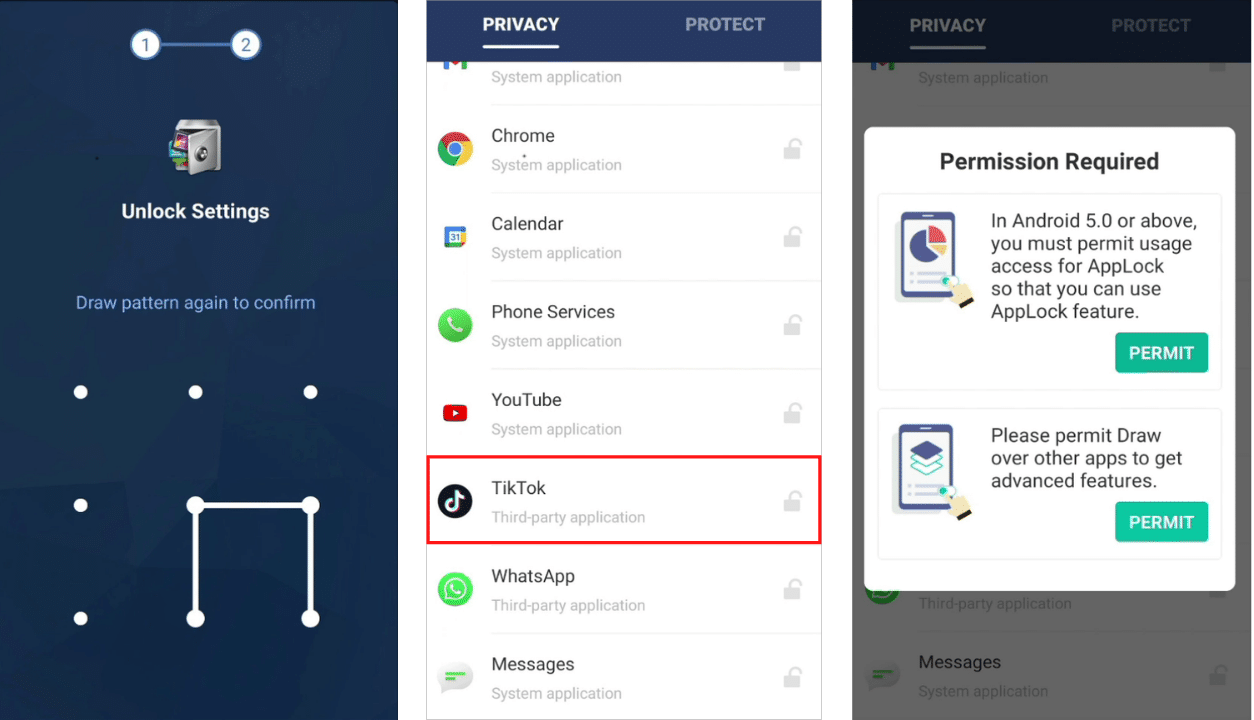 You will do these steps just once. You may now proceed to lock or unlock the rest of the apps without further validation. 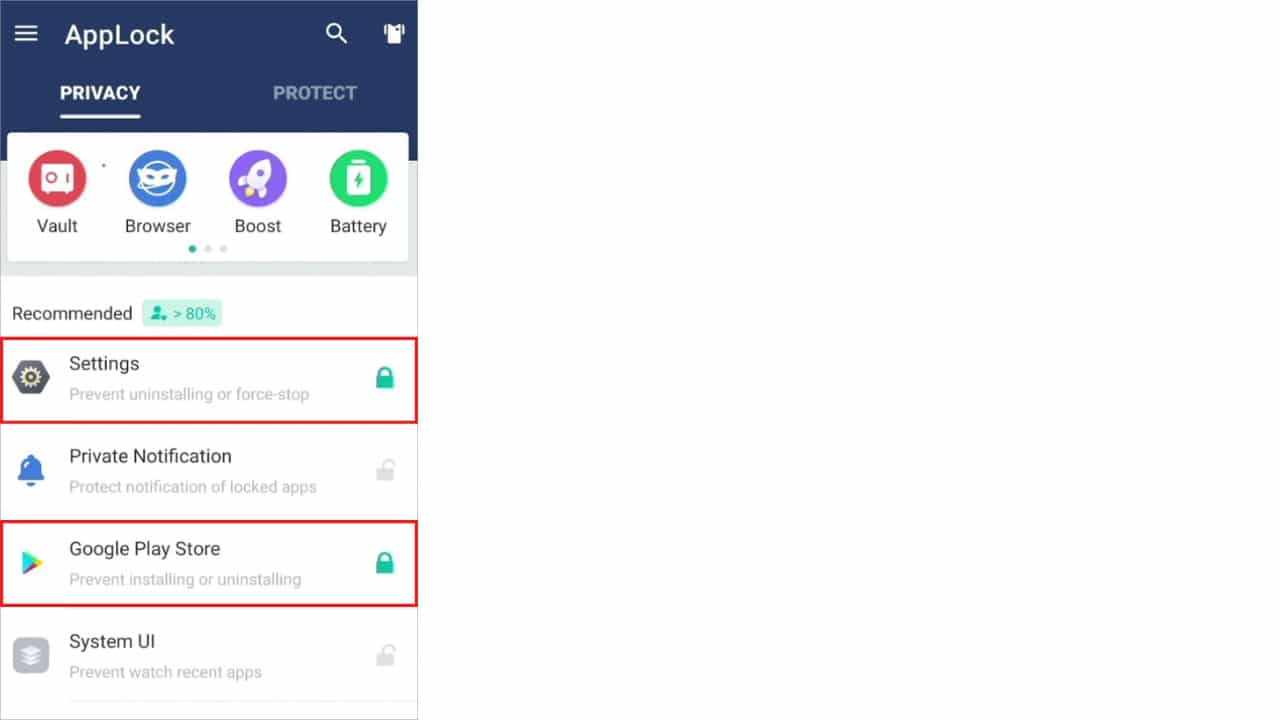 Now anyone who borrows or picks up the phone won’t be able to mess with the settings without your permission, as if you’d allow them anyway unless you need help with something. No one will be able to download any apps and games as well without consulting with you first.

⑥ Of course, Applock itself needs protection. Go to the Protect tab. Then select General. Then enable Advanced Protection. Applock will then be protected by the pattern you previously defined. But in order to open Applock in case you forget the pattern, type in a security email address. Then click Save.

After clicking save, click on Activate Advanced Protection. It will direct you to Android’s Activate Device Administrator screen, and again tap on Activate. 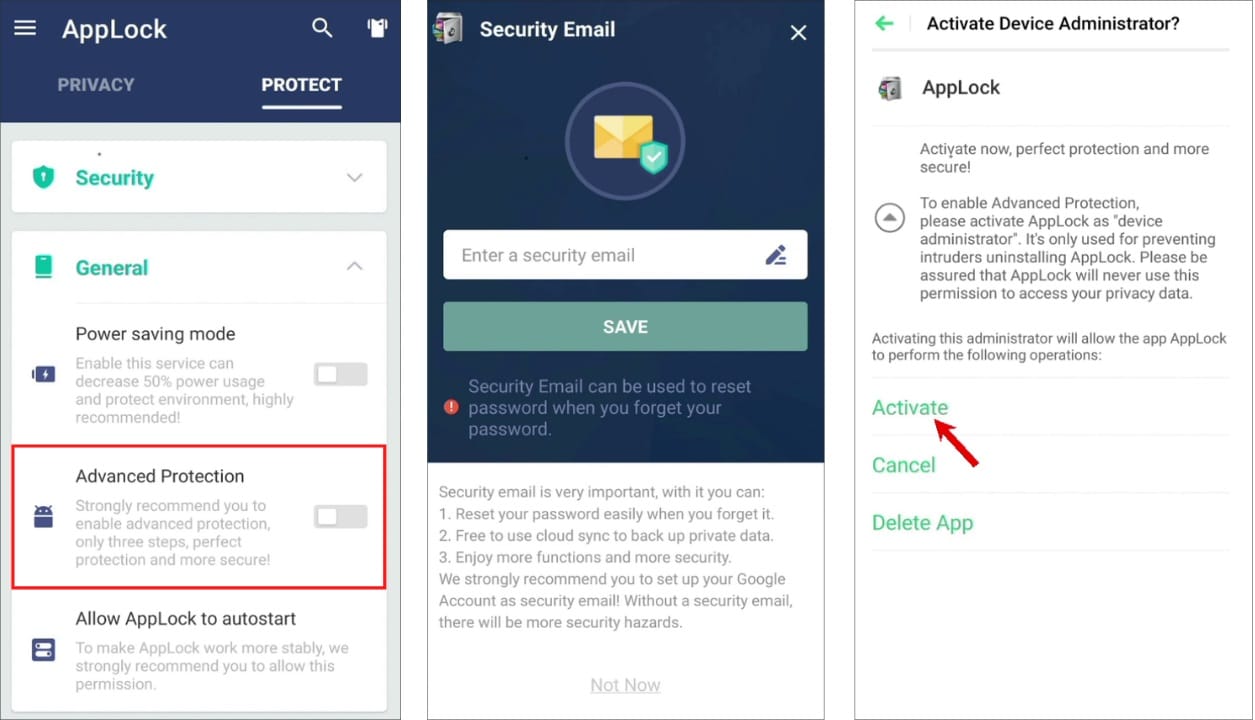 ⑦ While still in the Protect tab, expand on Security. Tap on Unlock Settings. Here, we will define a password as an alternative to the pattern to unlock an app. The password takes the form of a four-digit PIN. Enter the PIN twice if you choose this route. 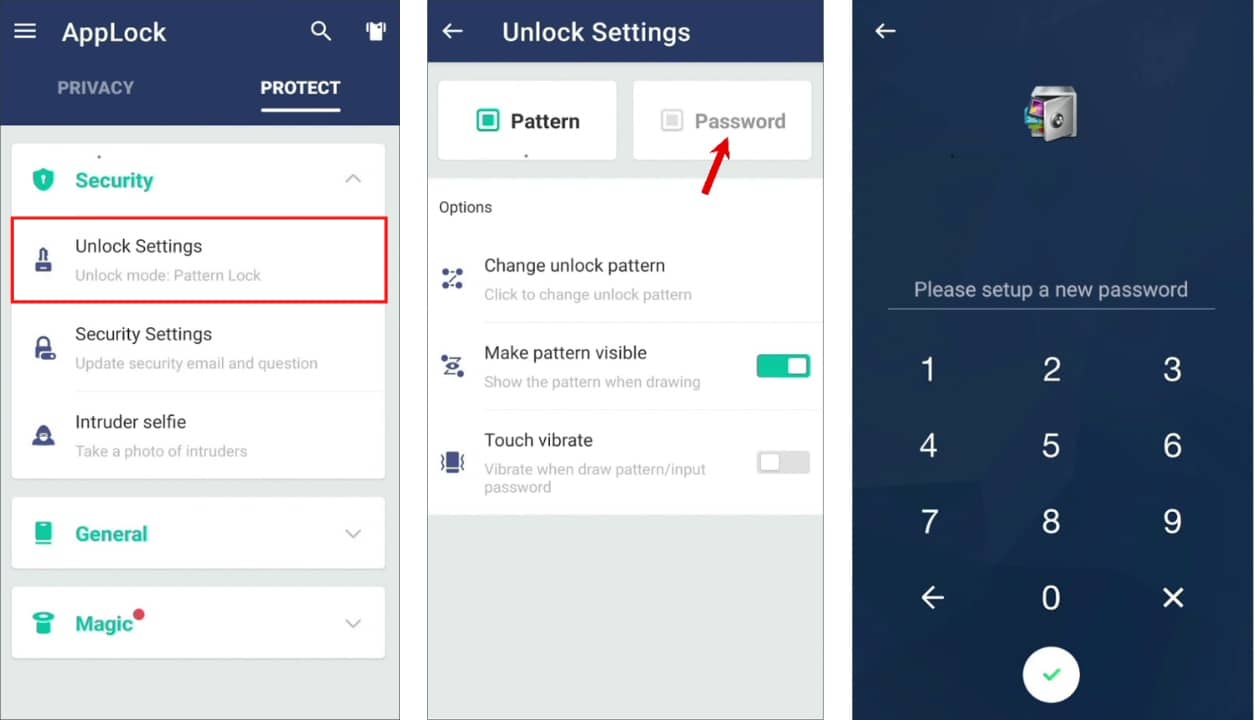 ⑧ Now any app you’ve specified in Applock becomes protected. A long press on the phone’s home screen icons will still display the Uninstall option on the context menu. However, if anyone taps it, a pattern or a password field will appear. 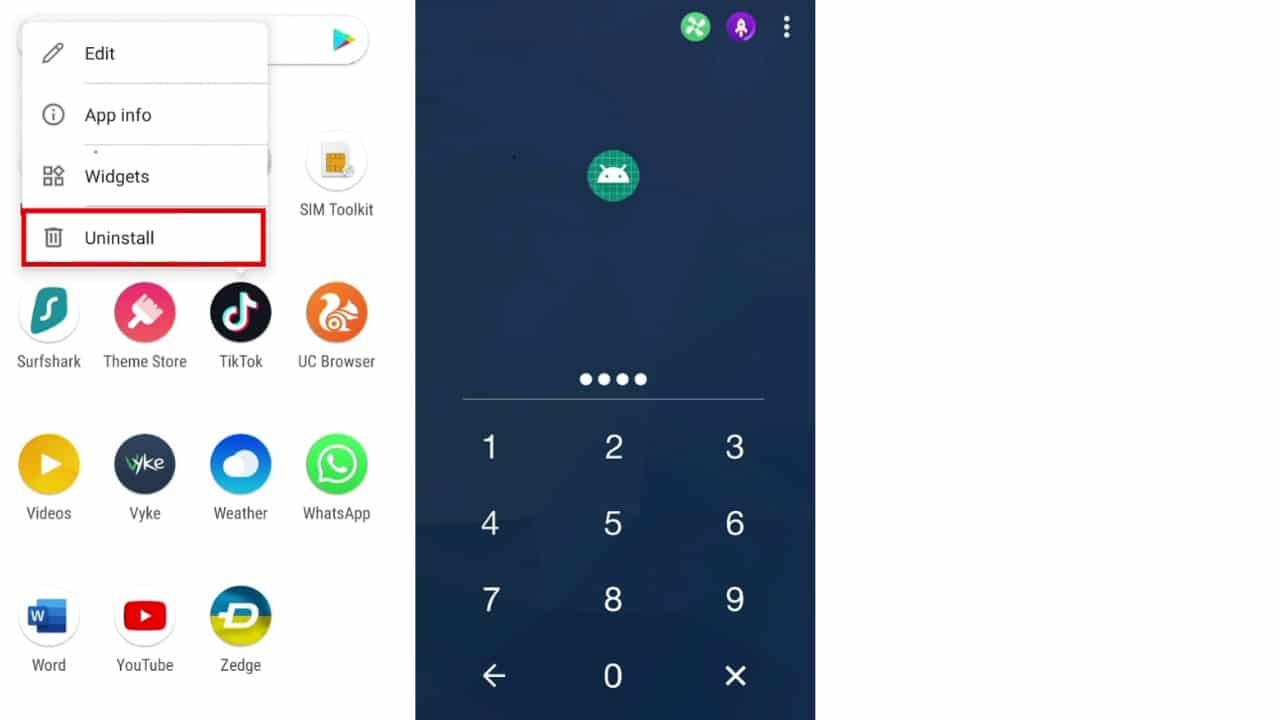 You now know how to prevent uninstallation of apps via Applock. Aside from being able to stop apps from being deleted on Android, there’s the added bonus of securing your apps from being opened without permission. Unfortunately, this is so far only available on Android, thanks to the OS’s flexibility. This functionality also becomes useful as a parenting tool to limit phone and tablet usage for kids during study hours. The same goes for grownups, in companies that make use of phones and tablets during production. Limiting which apps you can open discourages slacking off, prevents distractions, and increases productivity.

We hope you’ve learned how to prevent apps from being uninstalled on Android. Feel free to explore all the app’s functionalities.