One fantastic feature of a smartphone is the ability to take screenshots, especially when you need to store papers, pictures, and other things. However, the issue is how to take a screenshot on a Samsung A13. In this article, we will give you details on how to.

Also read: How to take an android screenshot directly from Windows PC

How to Take Screenshot in Samsung a13

Taking a screenshot could be a little bit different depending on the kind of gadget you have. In either case, saving photographs on your device is a simple and practical process. Here, we have listed 6 methods on how to take a screenshot on Samsung galaxy a13 5g.

The smartphone’s volume and power keys will be used in this technique. Typically, the Power button or the side key is on the right while the Volume keys are on the left. The placements of the keys, however, might be inverted for various models. Alternatively, all the keys might be on one side. 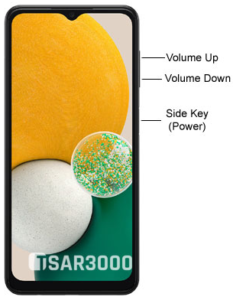 Some tablets might be equipped with a physical Home key instead. To snap a screenshot, hold down the Power and Home keys at the same time. 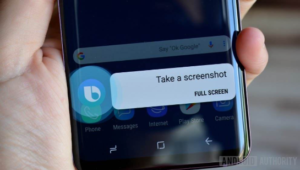 By saying “Hey Bixby, take a snapshot, then share it on Instagram,” you can even link together multiple sophisticated requests.

Another simple way of snapping a fast screenshot is using the S Pen’s Screen write feature. You can do this by taking your S Pen and navigating it through the screen you would like to screenshot. Click the Air command menu button with your S Pen, followed by Screen write. Your device will automatically capture a screenshot of the page you’re on. If you’d like, you can write or draw on the snapshot using the controls. When finished, touch the Save icon to save the screenshot to Gallery. Additionally, you may utilize Smart Choose on your S Pen to select specific areas of an image. 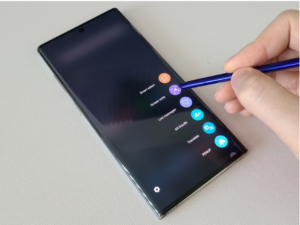 Another way how to take a screenshot on Samsung 13 is by utilizing the phone’s Edge panel. Only the Tasks Edge panel and the shortcut for taking screenshots need to be added.

You can start this by using the Edge panel handle on the right side of the screen and swiping left to open the panel. To choose it, hit the Settings icon at the bottom, then scroll over to the Tasks panel and tap it. Under the panel, tap Edit. Your favorite shortcuts will show up on the right side; a swipe across to the left side and press Take screenshots to add this shortcut.

Tap Take screenshot after that. The current screen will be captured by your device. You can now quickly use this shortcut whenever you need to take a screenshot.

If you need to take screenshots of documents that are relatively long, it can be done through scroll capture. To create one large screenshot, scroll capture enables you to snap numerous screenshots of a single page. You obtain the complete image this way. It also functions with all the other screenshot methods. In other words, you’ll still have the choice to use scroll capture whether you use button combinations, palm swipes, or even the S Pen.

To capture a screen, navigate to it. Press the Power (Side) and Volume Down (Key) buttons simultaneously to snap a screenshot. Tap the Scroll capture symbol when the Smart capture menu displays; it resembles a downward arrow and will bounce up and down. 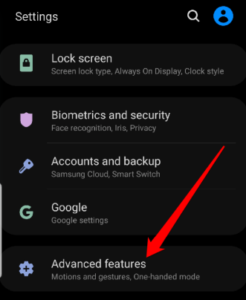 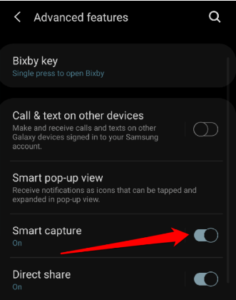 To start the scroll capture procedure, tap the symbol one more. Tap the icon repeatedly until it approaches the bottom of the page or the location you want it to be. By clicking the hashtag icon in the Smart capture menu, you can add tags to your screenshots. There will be suggested tags, but you can also make your own. To save your tag, tap Save. To exit the Smart capture menu bar after finishing, just tap outside of it. The screenshot can be viewed by tapping the snapshot preview or going to the Gallery.

Taking a screenshot on a Samsung galaxy a13 is fairly easy. This how to take a screenshot on Samsung galaxy a13 5g guide will help you do it. Moreover, you will be able to access your screenshots in the same location regardless of the type of device you are using. Simply go to and launch the Gallery. The notification for the screenshot can also be tapped after opening the Notifications panel by swiping down from the top of the screen. You can view a gallery of all the screenshots you’ve taken by tapping the Albums tab in the Gallery on some devices.