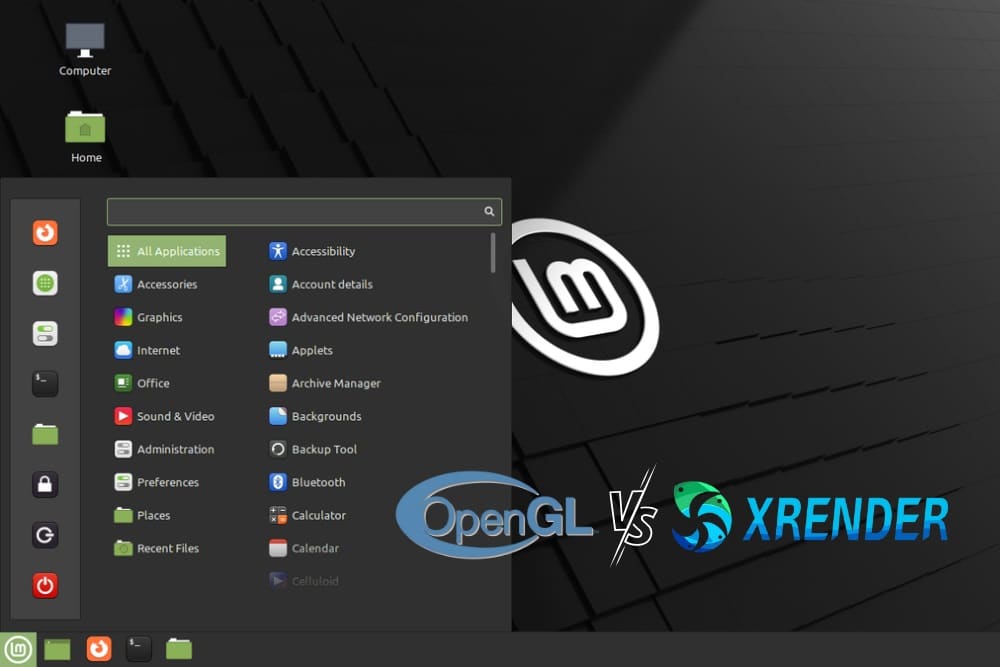 If you are a Linux user, you may already know that, in a KDE environment, you are allowed some personalization. For example, if you go to Desktop Effects, and then Advanced, you’ll find an option named ‘Composition Type’. Its where you can choose between OpenGL or XRender. In this article, we’re going to explore the differences between the two. We will answer the question with which we titled our content: is XRender better on Linux?

What are XRender and OpenGL?

OpenGL and XRender are both drawing APIs that allow applications to visualize shapes and color and even certain geometrical transformations. The main difference between the two is that XRender is an extension to the X11 core protocol designed to fix some limitations that were addressed in the core X system. In particular, the core system does not draw transparency effects efficiently.

Transparency is hard to achieve on a screen because screens are made of pixels and each pixel can show only one color at a time. The only way to produce the transparency effect on a screen is by mixing the colors of the transparent object with the background color (which is what is called alpha composting).

With the standard protocol, obtaining transparency is inefficient and can cause many problems; this is why XRender has been implemented. That said, is XRender better on Linux when compared to OpenGL?

There is not a straightforward answer to the question, “is XRender better on Linux?”. Because it would still depend on the use you make of your system. If you are a programmer, for example, OpenGL is considered more flexible. However, if you are a common user, Xrender is considered easier to set up. XRender also has another important advantage: it can support systems that don’t have proper OpenGL support.

If you are using old, obsolete, or unpopular hardware, that is, with Linux installed, you already know that the only issue you can encounter more often than what you’d like is a lack of stable drivers. Drivers are software that you need to make all your hardware components work with the system you have installed. There are a lot of important drivers, but the most important is certainly the graphics ones: if you can’t find them, you can’t use your hardware. This is where OpenGL becomes too limiting and Xrender becomes better. Many systems that lack OpenGl support are acceptable for XRender operations: simply switching to XRender in your Display Effects setup on Linux could save your day.

Conclusion: is XRender better on Linux?

It is better on Linux in some cases. For example, if your system doesn’t work just fine with OpenGL, there is a high chance that it’ll be supported by XRender. However, if you already feel comfortable with OpenGL, you won’t find enhanced performance if you switch to XRender. XRender is an alternative available to fix many issues. But it wouldn’t be correct to consider it a boost to your system’s performance.