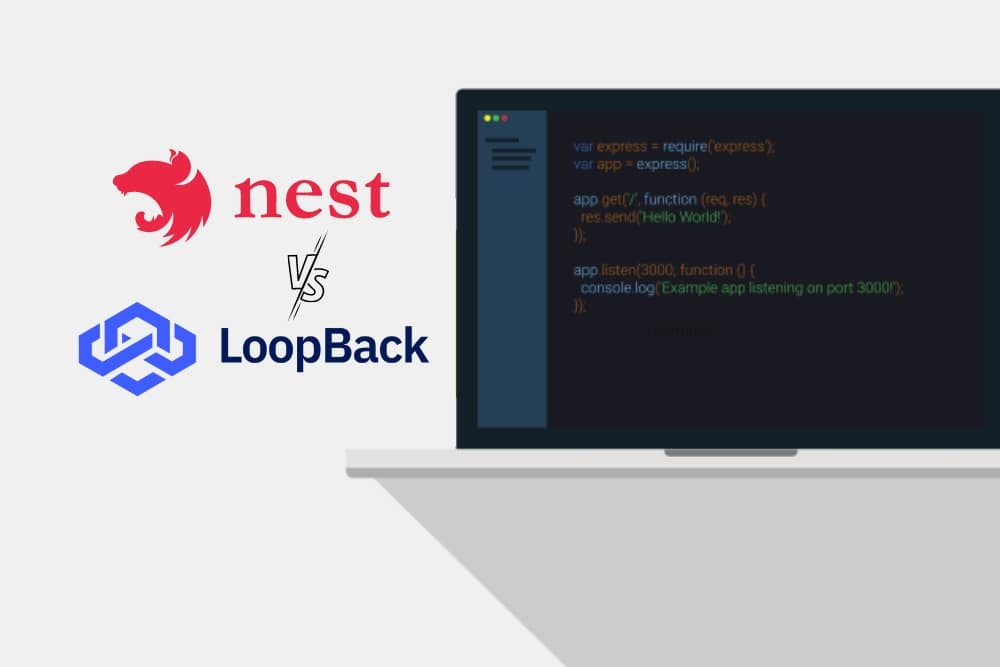 There is a silent battle among the best open-source tools on the internet today. some Developers and fanatics compared powerful frames. And talked about all their strengths and weaknesses. Among these softwares that are usually on the battle ends are NestJS and Loopback 4. These are Nodejs server-side frameworks.

Each software comes with different accomplishments and methodologies. The key point between NestJS and Loopback 4 is Project Management. So when you are in between the two, verify initially your project’s requirements so you can select which among the two you should go for. In this article, we will understand each fundamental and answer What are the differences between NestJS vs Loopback 4

NestJS is a full-stack Node Javascript framework. It is an open-source tool and is used to create reliable and effective server-side applications. The technology of NestJS supports TypeScript. It allows developers to code using the Javascript language. In addition, NestJS combines major concepts such as Functional Programming, Object-Oriented Programming, and Functional Reactive Programming.

The framework of NestJS functions using HTTP server frameworks by name of Express. It can also go with another option called Fastify. NestJS allows developers the need for Application Programming Interface so that they can execute several third-party applications.

Loopback 4  is another Node Javascript server-side framework that supports Typescript and runs through the Express framework. It is an open-source tool that gains a supportive community allowing users to be mentored and guided. This application is generally used to build APIs more quickly. It is a given that APIs work as an intermediary for several back-end systems. And Loopback acts as the bridge that will connect these systems easily, effectively, and quickly.

What is the difference between NestJS and Loopback 4?

The difference between NestJS and Loopback 4 is the purpose that each of them would have to work on. While NestJS is used to build server-side applications, Loopback is used to build effective end-to-end REST APIs.’

NestJS has been released two years more than Loopback 4. They both have moderate learning curves.

Both applications are very scalable. NestJS is scalable for large apps. It has an application architecture that can support developers to create powerful applications.

On the other hand, Loopback 4 is also a scalable app when it comes to developing composite Node.js apps. It efficiently connects different systems to come together to build a common solution. It allows developers to create as many as many capabilities without the need to break the core of the application.

Before delving into which one of the two, let me summarize the main and important features of NestJs and Loopback 4. NestJS has a Command Line Interface that aids in increasing development and productivity. It has a dedicated section for documentation of its microservice-type applications. NestJs also has an actively developed and maintained codebase that makes unit testing convenient and easy.

Loopback 4 allows the use of Android, iOS SDKs, and AngularJS for its quick build-up of client-side applications. It can quickly connect to any backend data store such as MySql, Postgres, MongoDB, and Oracle. Loopback 4 can be installed easily with its great authentication and authorization setup. It features role-based access controls, API Explorer Model, and user models.

NestJS vs Loopback 4: which one should you use?

So far, we have come up with the realization that there is no best and better between the two frameworks because they provide different purposes. Our choice must depend on the project that we are going to build.

If you aim to develop an application, NestJS is the best choice. However, if your project works on creating APIs and building bridges between them, Loopback 4 framework is the one to go.