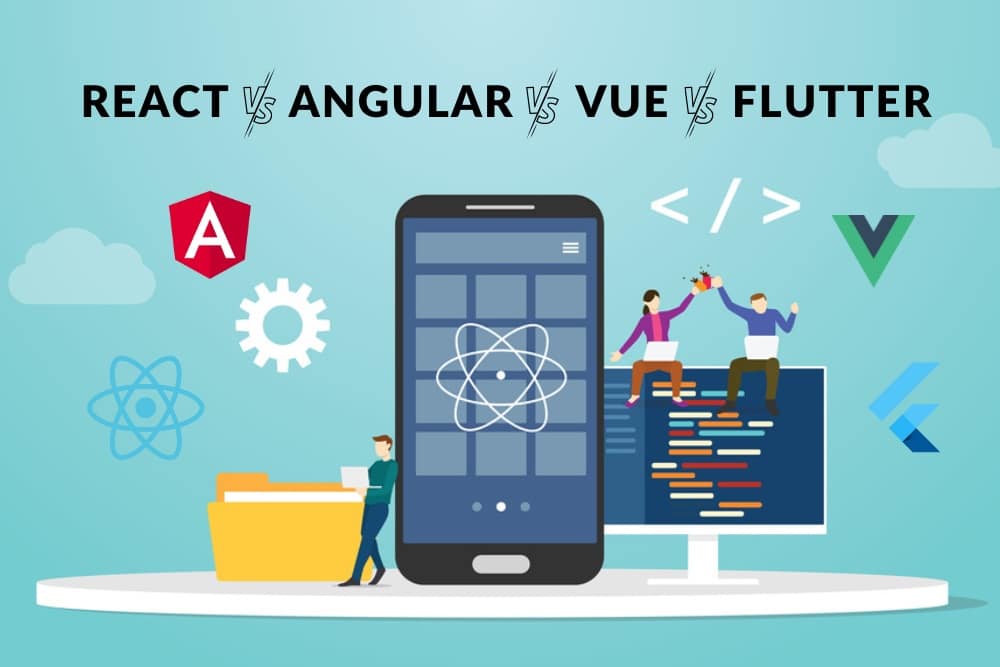 JavaScript is one of the most popular programming languages on Earth. You’ll rarely encounter a developer who doesn’t know JavaScript, especially if they deal with web pages and apps. However, front-end web apps developers have more than JavaScript in common.

Front-end web apps developers usually have the same issues. This includes choosing the best framework that helps them facilitate their work and create the best project. Usually, developers choose between four frameworks: React, Angular, Vue, or Flutter. Of course, there is no one absolute best framework, but each of them is more suitable for certain projects. This is why we thought of providing you with an article to discuss the four frameworks’ similarities and differences. This way, we hope to help every developer simplify their choice.

What is a framework?

Before starting to discuss the specific frameworks, let’s take a step back and analyze what is a framework.

Using a framework isn’t mandatory when you are developing an application, however, many developers use them because it can quicken their process a lot. However, it isn’t only a matter of speed and required effort: using a framework can boost the developer and their application performances because it prevents errors and optimizes the entire process. It’s not by chance that the giants in the sector of digital resources (Google, Facebook, and more…) not only use these frameworks but have also developed their own.

React, Angular, Vue, and Flutter are all open-source platforms. Some of them are very similar and some have peculiarities.

React is one of the most popular Javascript libraries for mobile and web application development. It was created by Facebook in 2013 and contains a collection of JavaScript code snippets that developers can use and reuse for interface building. These code snippets are called components. Using components can ease developers’ work and make it quicker and more efficient, avoiding many errors along the way.

Despite it being often compared with Angular and Vue (just like we’re doing in this article), React isn’t technically a JavaScript framework: it’s only responsible for rendering components of an application. But at the end of the day, you can use it to create complex functions and as an alternative to Angular and Vue.

Angular is an open-source Javascript framework (even though it is not written in JavaScript but TypeScrypt). It was first released in 2010 and now it is used by giants of the web app sector, including Google.

Angular’s primary purpose is to develop single-page applications. The framework provides a standard structure for developers to work on and create large applications.

A structure like the one provided by the Angular framework can boost development speed and efficiency. Furthermore, it boosts the application performance because it reduces the chances of incurring errors.

Vue was created in 2014 and it’s a Javascript front-end framework written in JavaScript. In particular, Vue is a progressive framework: developers can pick the specific functionalities they need from the Vue libraries and tools. This can ease the work of developers a lot.

Flutter is an open-space development kit developed by Google. The main peculiarity of Flutter, when compared to other frameworks in this article, is the Hot Reload feature. With this feature, developers can obtain reload times within seconds without losing control over simulators, hardware, and emulators.

Why should you choose React?

React is very flexible and can be used for many purposes. However, its main use is generally aimed at the development of dynamic apps. For simpler applications, other options could optimize better your work, but if you need to create dynamic apps, or if you need a flexible framework that you can use repeatedly, then React is the best option of all.

Why should you choose Angular?

As we’ve mentioned, Angular has been specifically built and developed for single-page application development. If this is what you are building as a developer, then your choice is easy: opt for the Angular framework and start building from it.

What is Vue used for?

However, developers usually pick Vue as their framework when they are not sure of the entity of their project. When you start developing an application, you are not always aware of how complex it is going to turn out. Because Vue is very scalable and can be suitable for very simple projects and more complex ones. Vue is the go-to option when you need to start little, but you don’t want to be forced to change your framework when (or if) your project becomes more complex.

What is Flutter used for?

Flutter is mainly used to create beautiful and advanced UI (User Interface) and deliver user-friendly applications to the public. If user-friendliness is your priority, then you should opt for Flutter as a basic framework to work on.

As we’ve mentioned, this article wasn’t aimed at selecting the best Javascript framework of all. As developers, there are a lot of frameworks at our disposal and we need to be aware of them all. The choice between them depends on your skills and knowledge, and what you need to do.