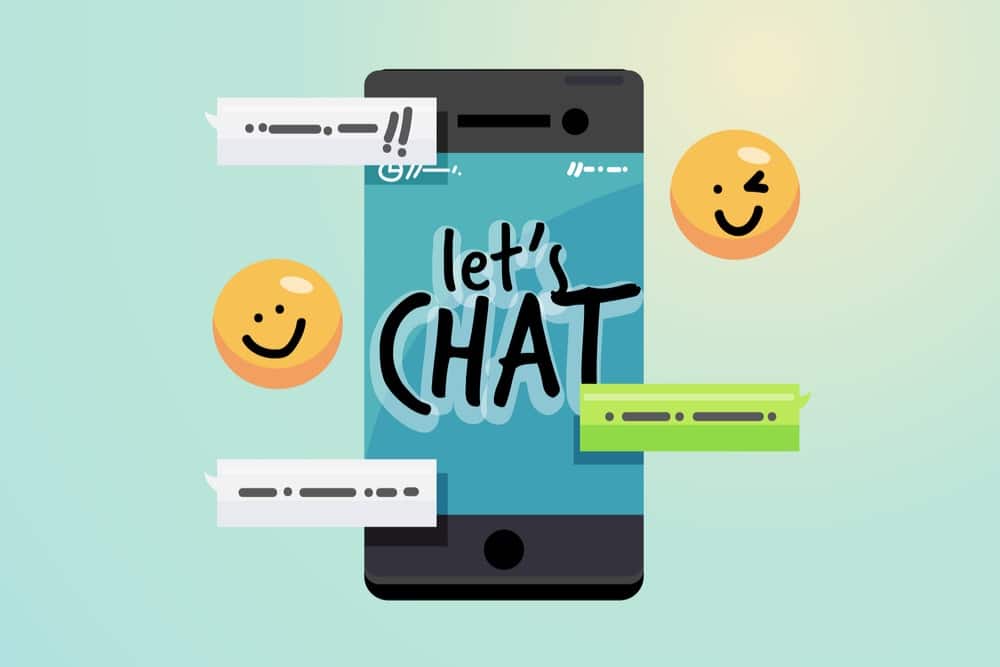 Sometimes, it’s important for people to communicate in secret, for privacy reasons or otherwise. Phones, despite being private devices are not immune to eavesdropping by those not involved in the communication. As implied by the title, Secret Messaging Apps that Look Like Games, this mostly implies situations not involving work as one cannot get caught playing games unless the company has stress-relieving policies in place. And sometimes, there are communications that need to be hidden from even those closest. So how can one hide that they’re communicating or messaging when they shouldn’t or with whom they shouldn’t? One method would be pretending to play games. Fortunately, there are secret messaging apps that look like games and that’s what we will be discussing.

These apps will be completely functioning messaging apps like WhatsApp or Messenger. These Secret Messaging Apps might even be clients of popular messaging services or have messaging services of their own. These could be games with chat features or messaging apps with games. Privacy concerns or whatever, some of these apps also act as mini social media platforms with light competitive gaming much like Club Penguin and Candy Crush (but with chatting). Without further ado, let’s list down the apps that fit the bill.

First, it’s not wordplay for a gaming platform for adults. PlayJoy is a social gaming platform where people can play digital versions of popular games such as Bingo, Chess, UNO, Ludo, Dominoes, and others, all while being allowed to chat with each other as if they were actually playing around a gaming table. Players can be two people or more depending on the game, and they can freely chat with each other. The colorful interface will give eavesdroppers the impression that you’re only playing a game but are actually planning to take over the world over a game of chess.

Users can choose between public and private chatrooms but for the purposes of this list of Secret Messaging Apps that Look Like Games, the private chatrooms are preferable. Players and chatters need to sign up using their preferred social media account and invite friends over for a chat. 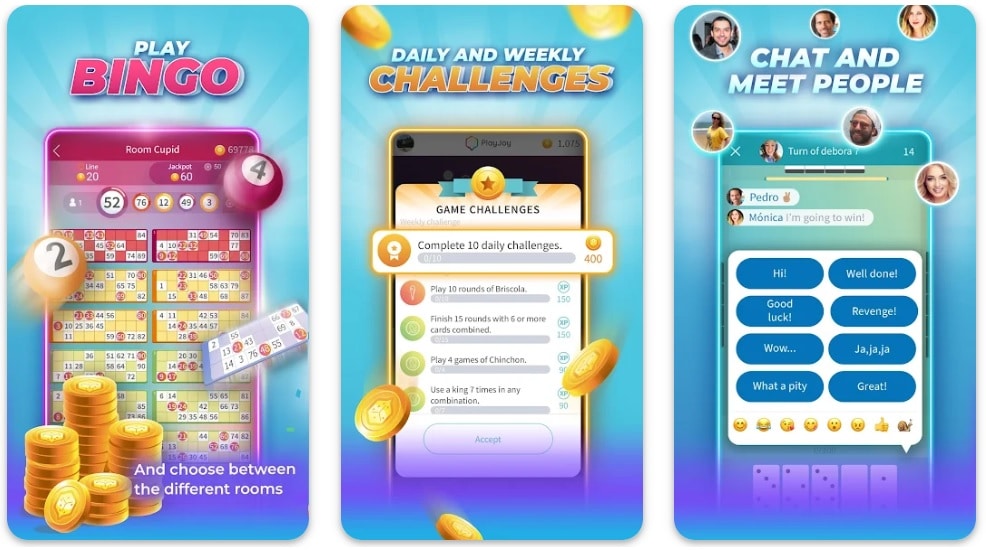 There isn’t much to play on PlayJoy but it suits most purposes, but Hago has a selection of over 200 games to make things more interesting. Hago not only allows personal one-on-one gossiping but group chats as well. Users can even create special customized rooms. Friends can even organize online parties where they can even sing karaoke. As mentioned, games can be one-on-one or play party games. Aside from private chats, the app also allows for noisy, far less stealthy live streams. You can download Hago for free, and pay for in-app purchases if you want to access additional features. 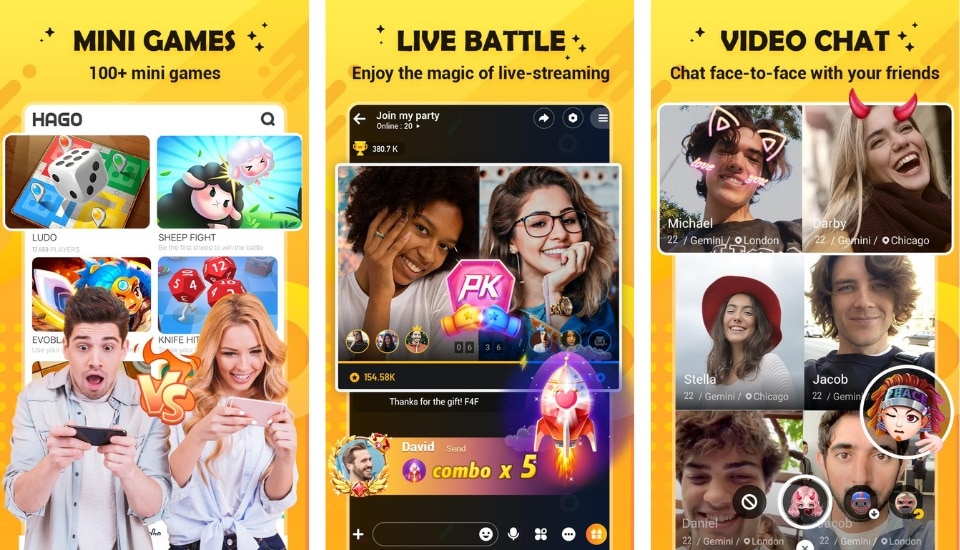 Bunch is said to be the pioneer in this genre. The first multi-player video chat software which lets friends meet together and play some competitive games while discussing private stuff or general topics. Bunch has plenty of fun and interesting games that can be played as friends chat away. These games include Flappy Lives – similar to the infuriating Flappy Bird, Bunch Pool – where drinking buddies miles apart can enjoy a little pool, Trivia – for the intellectually inclined, Hoops – for basketball fans, Mars Dash – a racing game, and Draw Party – a doodle guessing game. These mentioned are just some of the many games made available since the app’s inception. 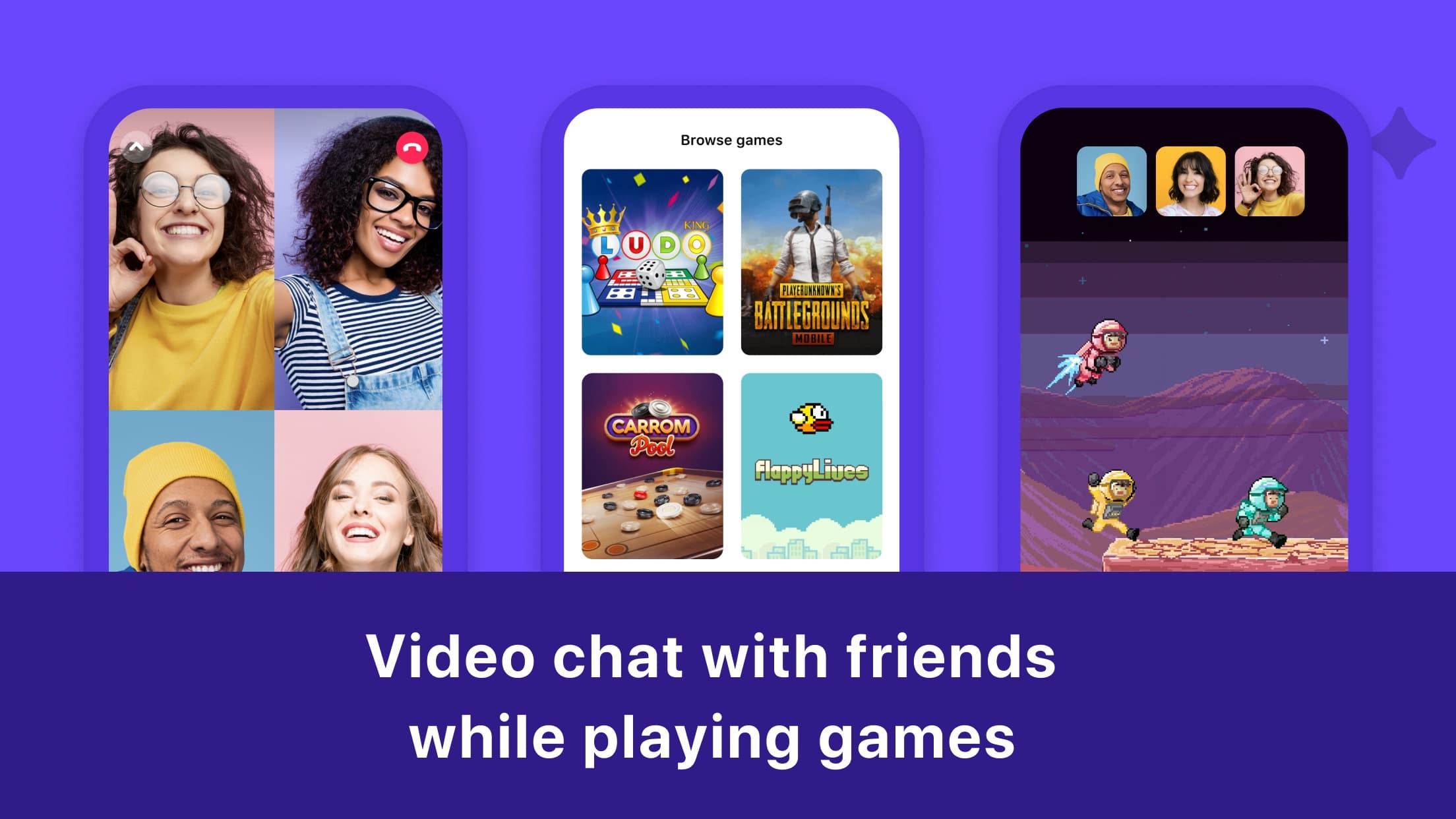 Yubo is a growing gaming social network that started as a French social networking software in 2015. The app is completely free and is supported by in-app purchases and is available on both iOS and Android. Much like our other entries in this list of Secret Messaging Apps that Look Like Games, Yubo is mostly a social site first but supports live gaming where friends can chat while playing. This app is targeted at teenagers but can also be used by adults as well. Join the over 50 million people already subscribed to the network and make yourself appear to be playing a game while clandestinely cheat—er–chatting.

Messages remain private thanks to a partnership with Snapchat, and friends can have fun while live streaming thanks to over 30 lenses available. Thanks to its longevity, members have separated themselves into multiple communities based on interest. Signing up can also mean opportunities to meet someone new. 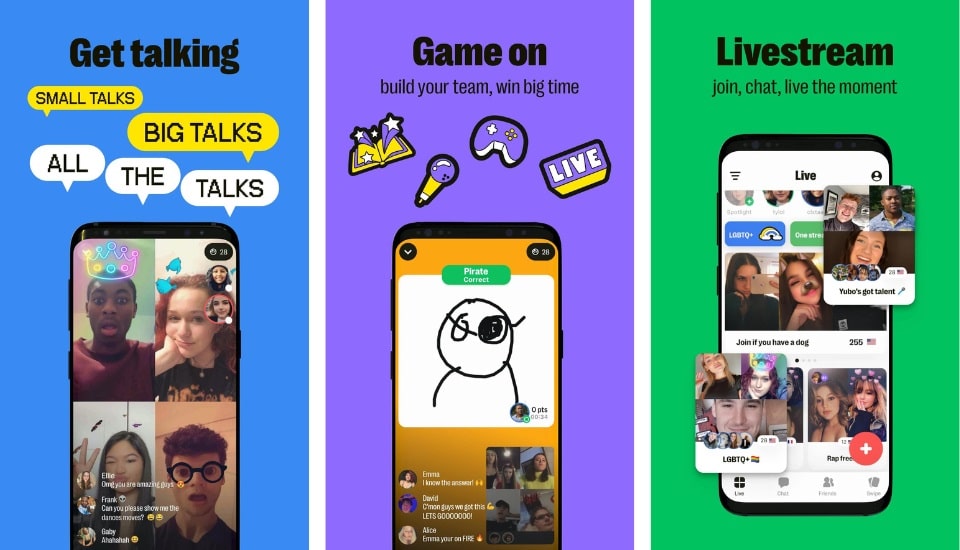 Plato is slightly older than the previous entry with a host considered ancient by internet standards — Yahoo. Plato was created in 2014 but continues to reign as a social gaming platform with over 5 million active users with over 30 million members. This app has over 45 games available based on classic tabletop games including pool and UNO. All the games are free to play without any online purchase required. Plato is completely free with no ads. 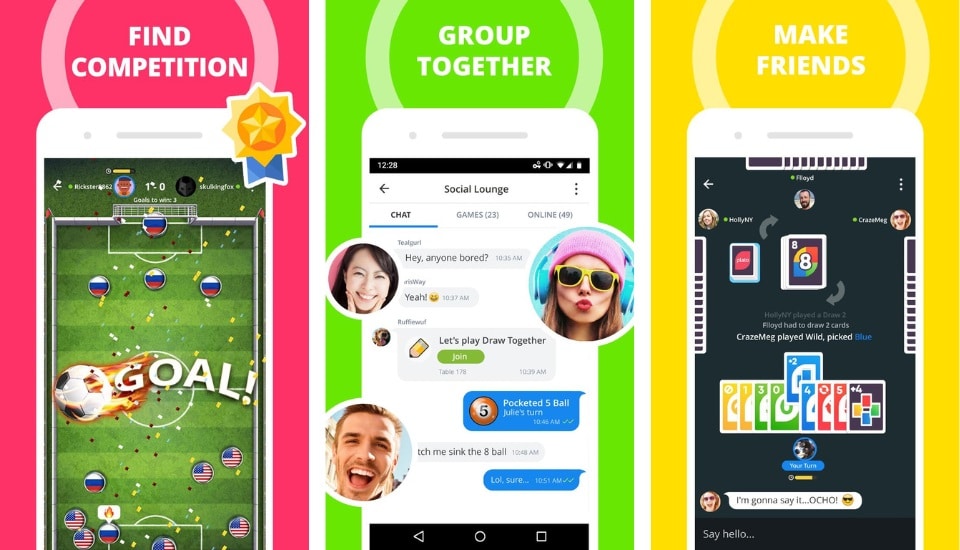 It’s not uncommon for people to play with calculators. It’s weird but not uncommon for people to type in random numbers and add them up or spell lewd words with numbers. Believe it or not, Calculator Pro+ is a secret messaging app that takes advantage of this unusual quirk in some people. It’s also a great way for people to clandestinely chat while at work pretending to fiddle with calculations. It’s still an actual functioning calculator but once the user taps in the secret PIN number, the chat screen appears. 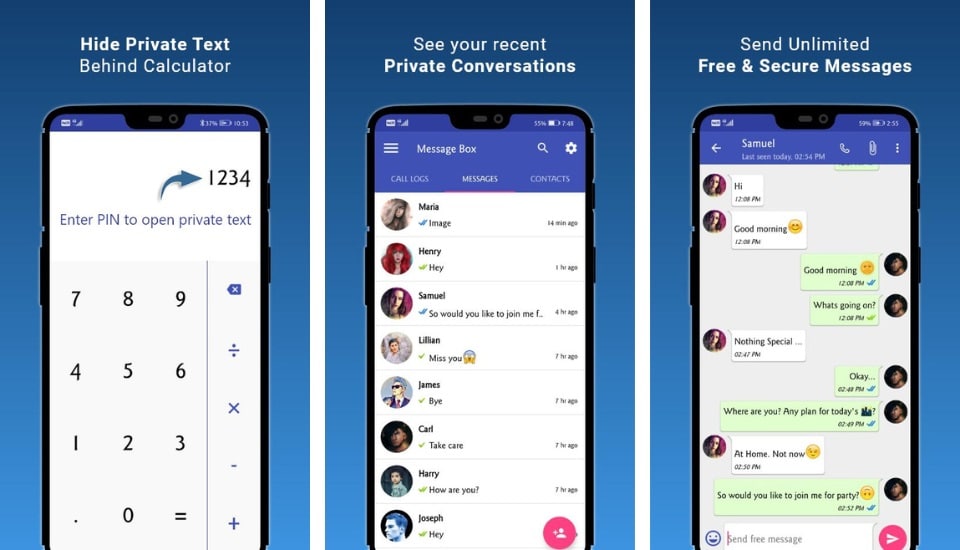 This one is more for Arab users as they have plenty of stuff to talk about, and they’re avid gamers as well. If you’re seeking Arab friends, this is the place to be where over 50,000 active members play and chat on a daily basis. The games are also online versions of popular tabletop games like dominoes, Ludo, and UNO as well as fun puzzle games. As the purpose of the app is privacy, the app is pretty secure. TopTop supports video and voice chats as well as the setup of public and private rooms. 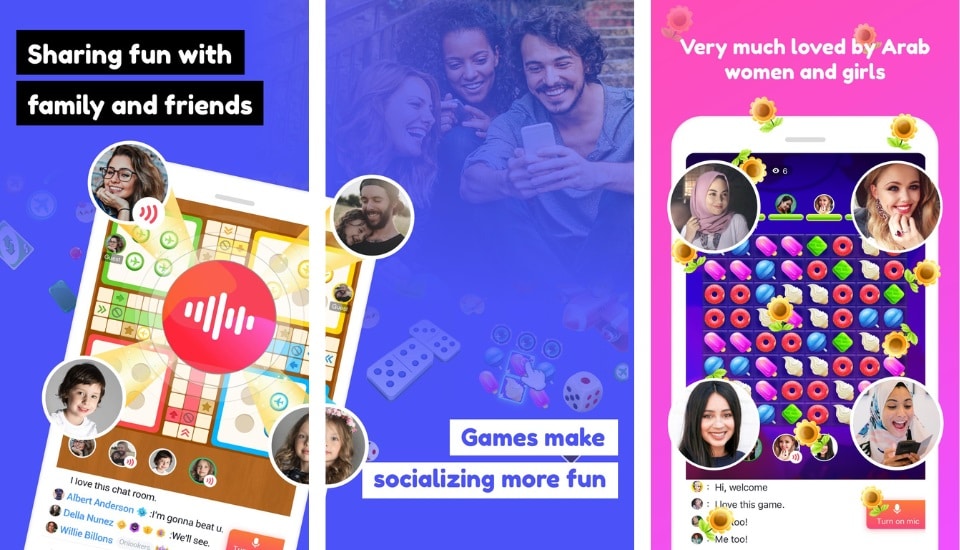 Try out these Secret Messaging Apps that Look Like Games if you feel want to privately chat while pretending to play casual and have fun chatting with friends.